Shares of Electronic Arts (EA) have held up fairly well of late, at its lows last week down 25% from its 52-week highs from January vs the S&P 500 (SPX) which was down nearly 35% and now down only 13% vs the SPX’s 23% decline from its February peak. EA is basically trading at the exact mid-point of its one year range: 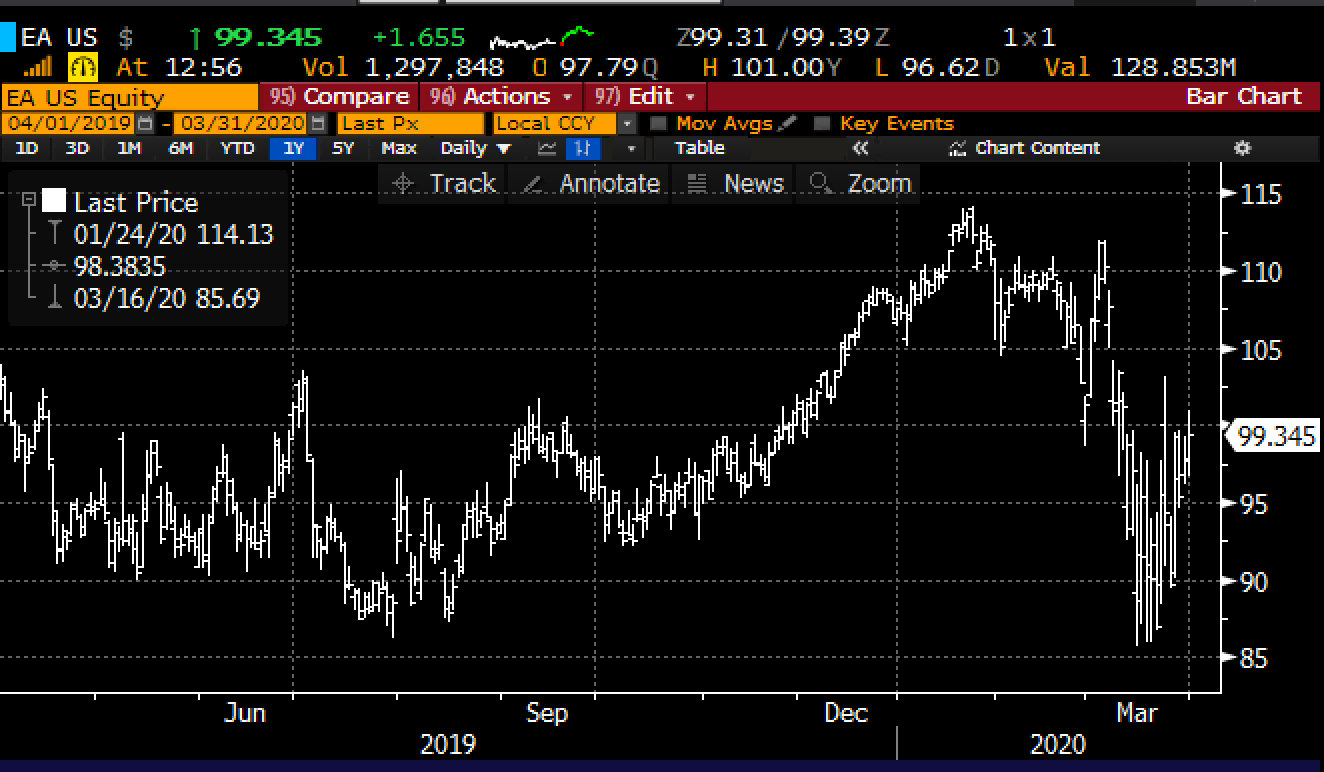 It is also worth noting that last week’s low in the stock found some support at is long term uptrend: 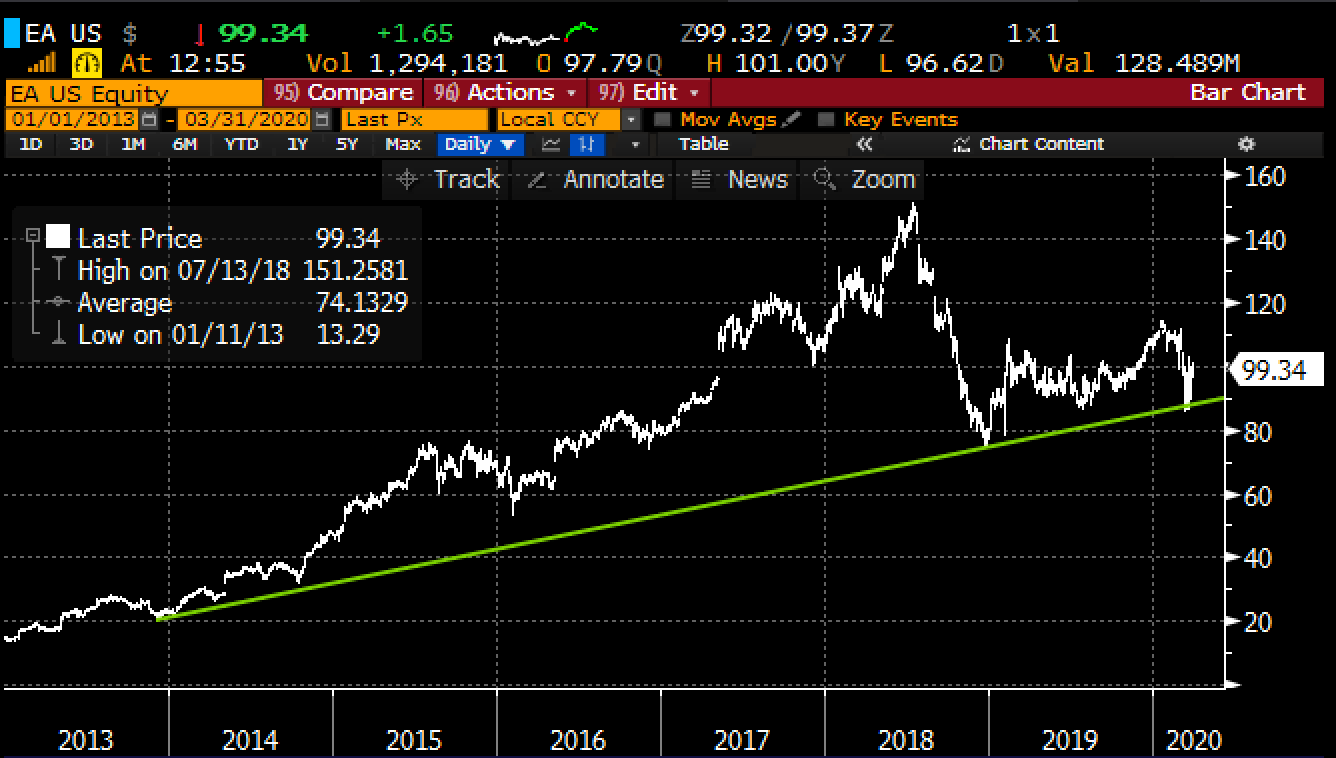 It is not just EA, but game developers Activision (ATVI) and TakeTwo (TTWO) have also massively outperformed the SPX and most large-cap tech peers.

The NBA is planning a players-only NBA 2K tournament that is expected to feature some of the league’s sharpest video gamers, including Kevin Durant, and it will be broadcast on ESPN, league sources told Yahoo Sports.

The league hopes to launch the event Friday, with the 16-player tournament lasting 10 days. It is expected to include stars such as the Utah Jazz’s Donovan Mitchell, four-time All-Star DeMarcus Cousins and two-time All-Star Andre Drummond, among other big-name players, sources said.

With the sports landscape on pause due to the coronavirus pandemic and the federal government extending the social-distancing measure to at least April 30, the league has been forced to evaluate the safest way to bring basketball fans some action.

EA has been in a leader in Sports gaming with the longstanding franchises, Madden, NFL, NBA, NHL, UFC and FIFA and considerable efforts geared towards eSports and competitive gaming. I suspect a good bit of the recent relative strength has to do with the premium placed on these efforts at a time where there is not a competitive sport being played IRL and hundreds of millions of people around the globe are shuttered at home who would normally be following and watching their favorite sports live, streaming via the web and on TV.

Current estimates for FY2021 for EA are for mid-single-digit earnings and sales growth which is likely high as most consumers facing companies could see dramatic dips in their current sales which might not see the sort of pent up demand on the back end of this crisis as consumers facing dimming job prospects might be a tad more conservative about discretionary spending. But make no mistake, at a time when TV and movie studios have had to stop production, where sports teams and leagues of all sorts have postponed or canceled seasons, the idea of live streaming competitive content that is social distanced seems pretty darn attractive and should be to media companies who have spent heftily on sports rights and franchise rights for media properties.

The company is not supposed to report its fiscal Q4 results until the first week of May, but let’s be honest at this point the worse the outlook given by most managements, the better off it is likely for them to be when demand does come back.

Short-dated options prices have moderated considerably, with 30-day at the money implied volatility cut in half from multi-year highs two-weeks ago to its usual pre-earnings level:

While that seems fair it is also worth pointing out that with IV at 40% it is still up 100% from the 52-week lows made in late December.

I would also add that the at the money call-in Septemeber, the 100 strike with the stock just below $100 is offered at $11 or 11% of the stock price… that’s what it costs to define your risk to the upside via calls in EA between now and late September.

The ideal scenario is that EA is near $105  on April expiation, if below the short call will expire worthless and you will be left long the Sept 105 call for only $7 cents as opposed to the $8.50 it costs now. If the stock is at or above the 105 strike than the short call can be covered if you want to stay long the Sept 105 call. The idea of the trade idea is chip away at the longer-dated premium and set up for a rally later in the year.

In a little more than two weeks if EA is at or below $105 it makes sense to consider turning into a calendar again by selling a May call, or possibly turn into a vertical by selling a higher strike put in Sept expiration.