Tonight I was supposed to take my 16yo daughter to see, Pearl Jam at Madison Square Garden. Pearl Jam is probably my favorite band of the last thirty years, and the fact that my daughter is into them makes me so happy because the band will be forever linked to the most formative years of my life.

Pearl Jam’s first album Ten came out the last week of August 1991, the very week that I reported to freshman orientation at Syracuse University. Ten exploded on the college music scene, and a month later Nirvana’s Nevermind was released and rock music would never be the same.

As a refresher, Alive, Jeremy, Even Flow, Black, Porch and Release, all anthems from their debut album. In 1993, my sophomore year, PJ’s second album Vs. made it very clear that these guys were not going to be a flash in the pain with songs like Daughter, Dissident, Rearviewmirror, Leash, Edery Woman & Animal. And then to really drive the point home that they are likely around for decades, my Junior year in 1994 they dropped Vitalogy with instant classics Betterman and Corduroy.

So Pearl Jam was the soundtrack of my college years, and frankly, they remain heavy background music till this day.

Around the time I got my first Sirius radio back in 2010, Pearl Jam was celebrating its 20th anniversary, and they launched a commercial-free channel on Sirius, full live concerts, curated setlists, interviews, and influences. As a father of two kids, driving them all over the NY metro area for sports and other extracurriculars, I have listened to hundreds of hours of Sirius channels (Pearl Jam, Grateful Dead, Bruce Springsteen, and CNBC on workdays) in the car and a few years ago realized that I could listen anywhere by downloading the app. When I look at my screentime app on my iPhone, Sirius is tops on the list.

When SIRI reported their 2019 subscribers on Jan 7th they announced adding a little more than 1 million paid subs to near 30 million “self-paid” subscribers with total paid near 35 million. The company issued the following guidance for 2020:

Shares of SIRI have been bludgeoned over the last month and a half, at its lows on March 19th down 45% from its 52-week highs made in February… 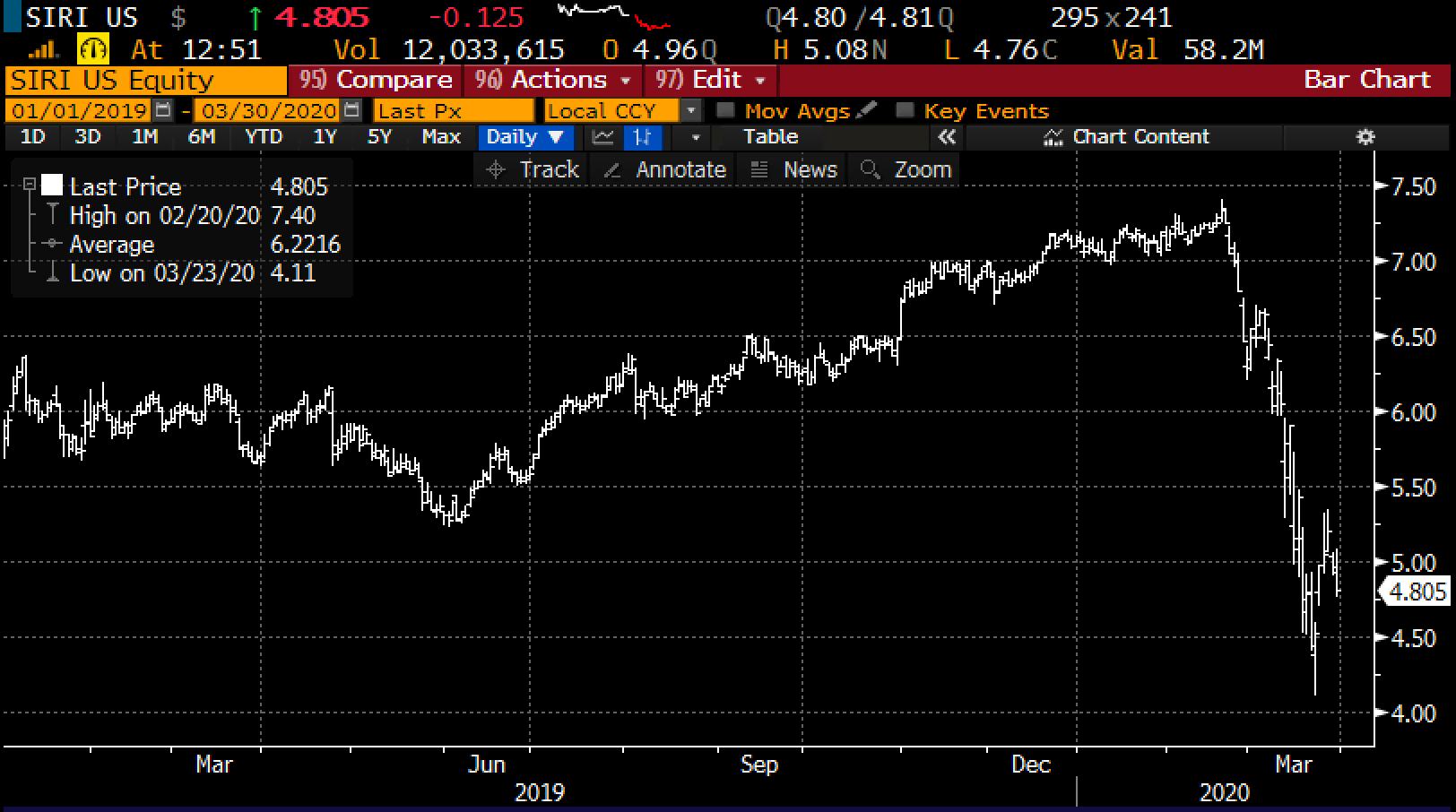 and now importantly below its long term uptrend from its 2009 lows: 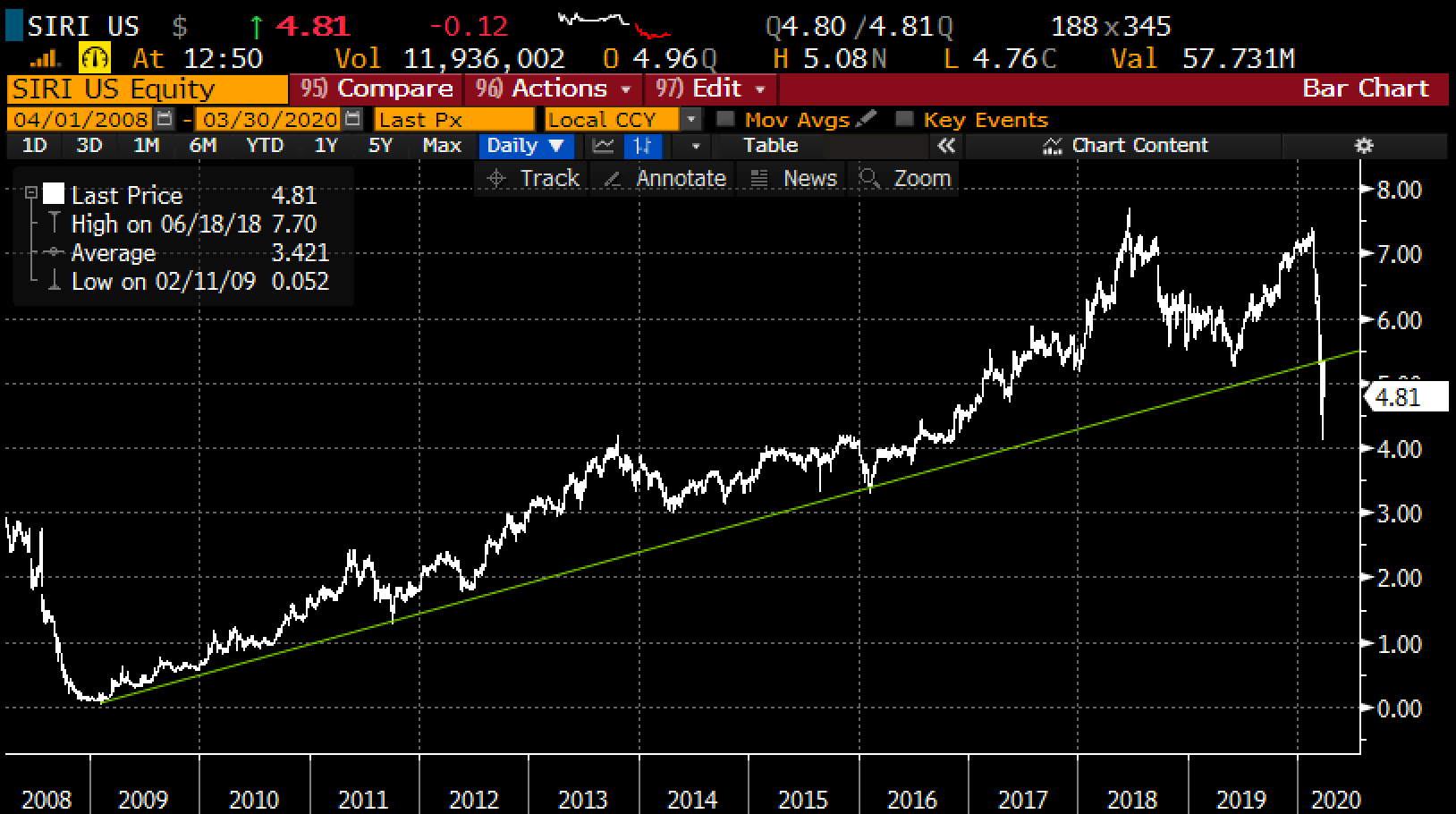 It is my view that SIRI (with Pandora) is a fairly unique media asset given its programming and the portability of its app product. I would also add that SIRI might be an important content delivery mechanism in the age of social distancing, especially when many of our favorite bands or talking heads have had to cancel live appearances for the foreseeable future.

What I find interesting about the streaming music space is that tech behemoths Apple (AAPL) and Amazon (AMZN) are sorely lagging behind upstart Spotify (SPOT) when you consider AAPL has an iOS installed base of 1.5 billion devices and AMZN’s 112 million Prime users in the U.S., per MusicAlly:

At the end of 2019, Spotify had 271 million monthly active users, including 124 million premium subscribers and 153 million ad-supported (i.e. free) listeners.

In June 2019, Apple announced that there were 60 million people paying for an Apple Music subscription. It hasn’t updated the figure publicly since then, although in the first half of 2019 it had added around two million net new subscribers a month – so may well have reached 70 million by or shortly after the end of that year.

In January 2020, Amazon announced that its music streaming service now “reached more than 55 million customers globally“, with its music boss adding in a Financial Times interview that “nearly all” of those people were paying for a subscription. This includes people using Amazon’s Prime Music tier, which is part of an Amazon Prime membership.

This one’s complicated. In February 2020, YouTube’s parent company Alphabet announced that there were more than 20 million subscribers to YouTube Music and YouTube Premium combined – the latter includes YouTube Music. As for non-paying users, in May 2018 YouTube revealed that “more than 1 billion music fans come to YouTube each month to be part of music culture and discover new music”. That figure hasn’t been updated recently though.

It is hard for me to imagine how Apple or Amazon Music would not want this scare media property, as an effort to cross-sell on their existing services while also adding a far deeper content stack.

SIRI though has been trading across its capital structure like it is distressed, short-dated equity options hit over 300% two weeks back, now down considerably…

While its debt due next year got slammed before also coming back: 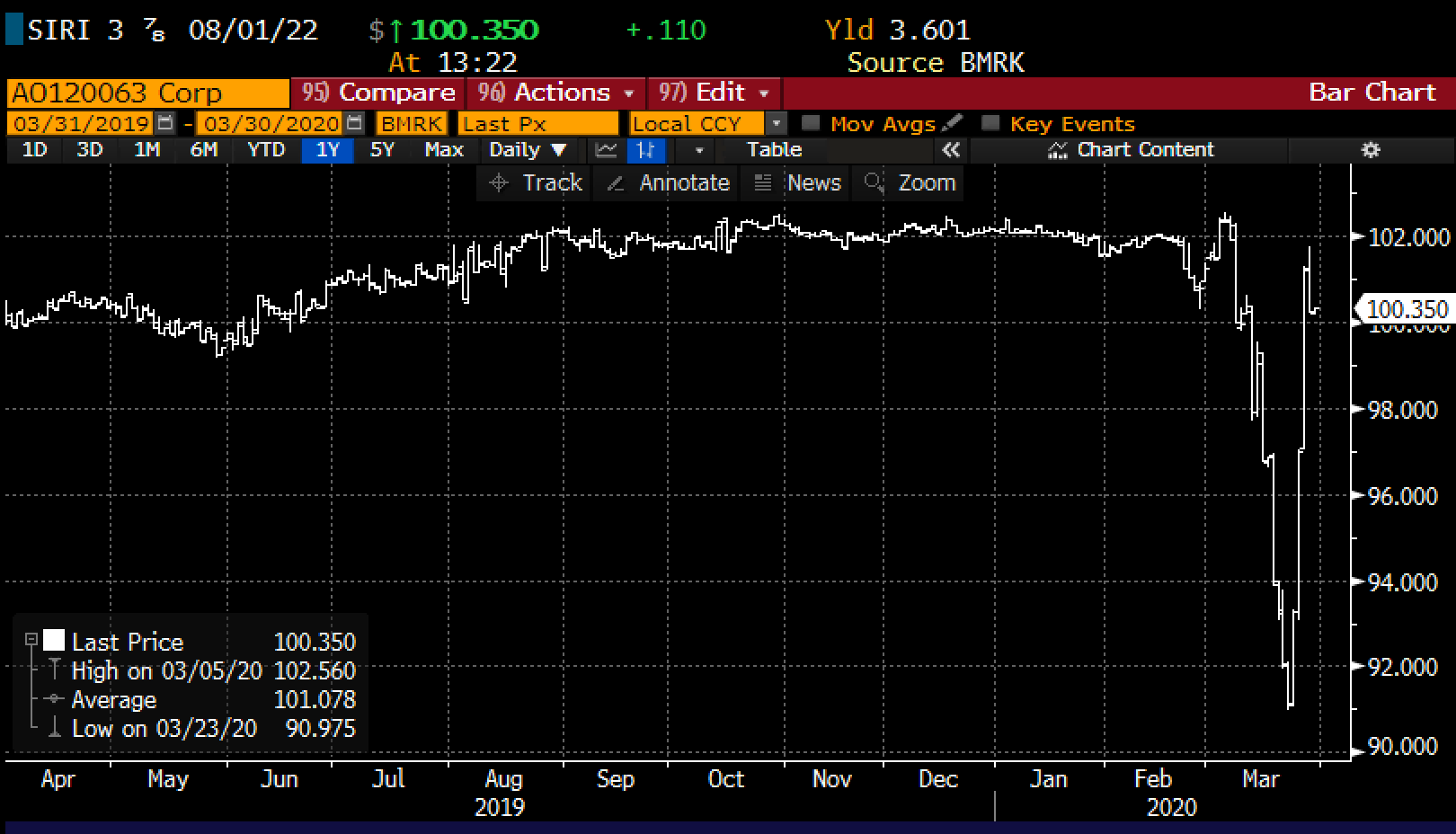 While it’s longer-dated debt yielding 5.5% due 2029 has not gotten back to pre-crash levels: 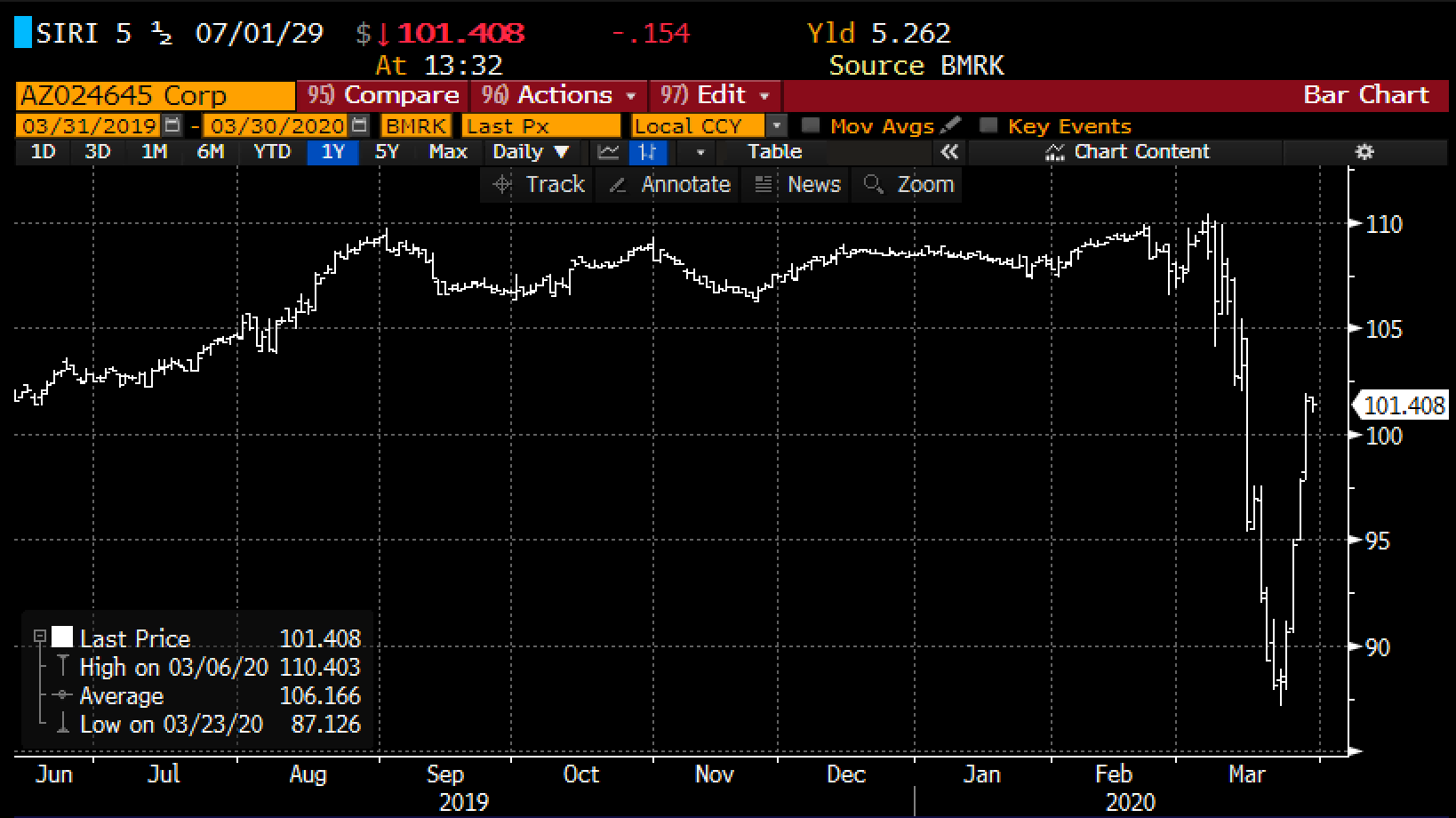 So in some, I love Pearl Jam, bummed I can’t see them with my daughter tonight at MSG, I’m happy that I have SIRI’s App where I can listen to the PJ Channel commercial-free whenever and wherever I want, I think that SIRI’s stock route and action in equity vol and debt markets make me think investors are nervous about their ability to service their debt, but I also think that Sirius XM is a very unique scarce media property that either Apple, Amazon or even Google should buy.

SO what’s the trade? I liked SIRI for all of these reasons two months ago when the stock was above $7… but it would be foolish now to discount the price action in the stock (underperformance), the extreme levels of implied volatility in the options market, the weakness in its debt and the strength in the CDS. Yes, they are all intimately related, but if you are inclined to be bullish on the equity, then doing so with defined risk and taking advantage of the high levels of options prices make sense. Call Calendars look attractive, selling a short-dated out of the money call, and using the proceeds to helo finance the purchase of longer-dated out of the money calls of the same strike, for instance:

The ideal scenario is that SIRI is near $6 on May expiation, if below the short call will expire worthless and you will be left long the Sept 6 call for only 20 cents as opposed to the 30 cents it costs now. If the stock is at or above the 6 strike than the short call can be covered if you want to stay long the Sept 6 call. The idea of the trade idea is chip away at the longer-dated premium and set up for a rally later in the year.

Rationale: this is a low premium way to leg into some long exposure in a very unloved name, risking about 4% of the stock price. But this position also offers some optionality, with the potential to spread the Sept calls again by possibly turning into a vertical spread by selling a higher-strike call in Sept further reducing the premium at risk after May expiration.