Bill Ackman is right, now. Two weeks ago the hedge fund manager, founder of Pershing Square went on CNBC and had a meltdown on national tv about what he feared the current government response was likely to do to his investment portfolio, I mean the U.S. economy, our livelihoods, and our health unless they closely followed his panic plea to “SHUT IT ALL DOWN… HELL iS COMING!!” That day on CNBC and on RiskReversal I had a few thoughts about his delivery (Stay in Your Lane Bro), in a nutshell, don’t hold your breath for the Oscar nod. Ackman caught a ton of heat from the investment community as many thought his on-air panic caused a leg lower in the stock market, only for him to reveal a week after the interview (and after the stock market had strung a few green days together registering a 20% bounce from last Monday’s lows), that his firm had netted $2.6 billion on his market hedges (that benefitted from a market decline). Of course, the point of a hedge is to offset losses of the positions that you want to be in, we might never know his true motive as he also stated that he was bullish on stocks and was buying.

This morning Ackman is tweeting again, at POTUS offering a constructive construction plan for America, to put people back to work at time where multi-trillion infrastructure projects can be financed cheaply at a time where commodity costs are very low. 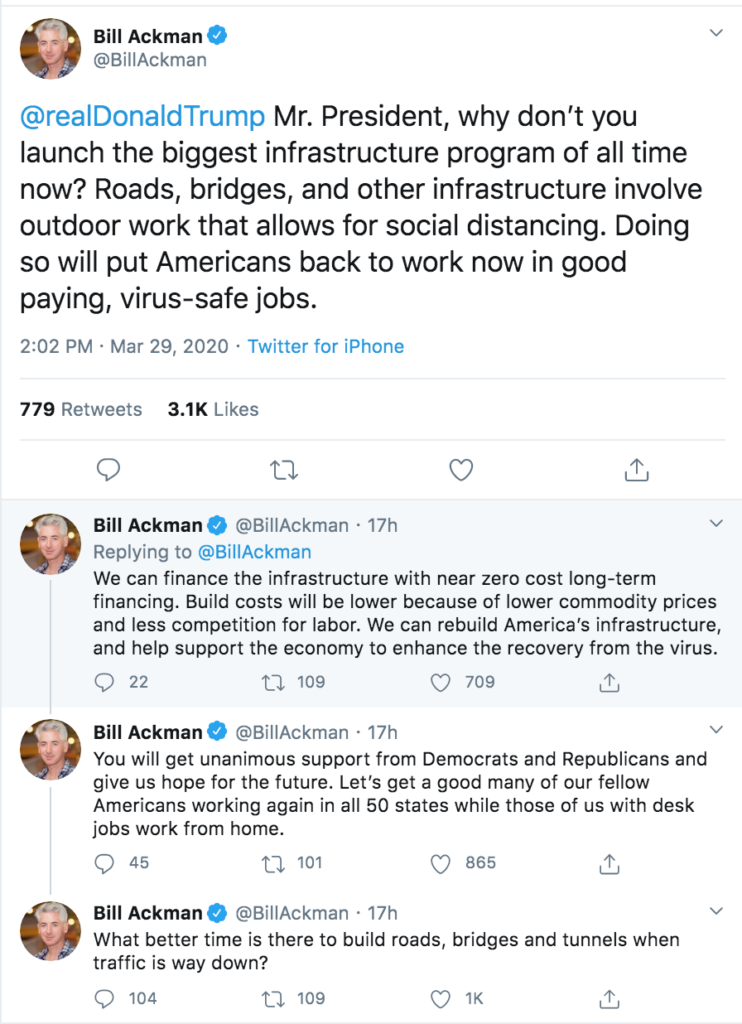 Ackman is obviously not wrong to point this out, for the last twenty years, which has included two recessions, interest rates have been trending to zero, and vs inflation, they have been at or near zero for the better part of the last ten years: 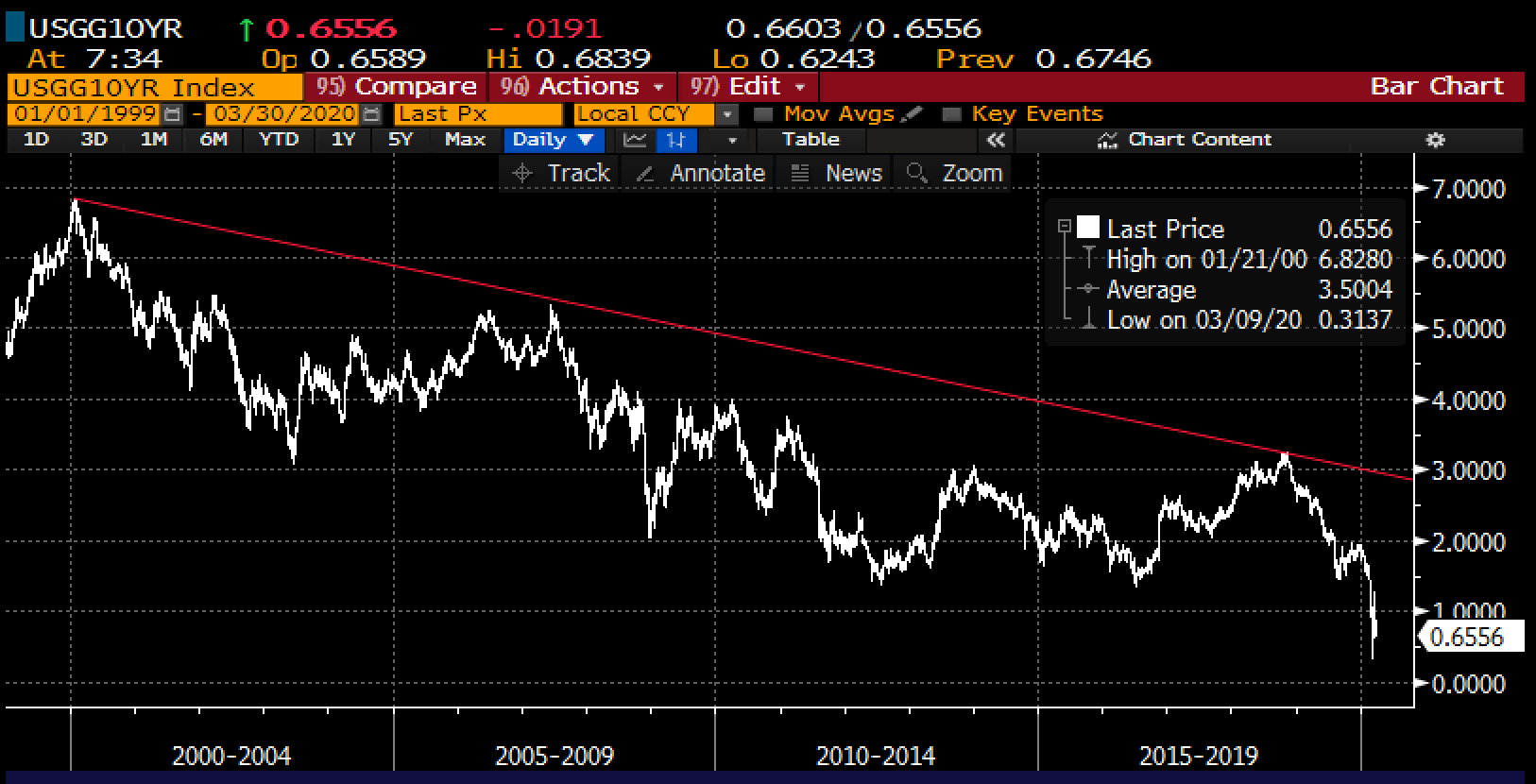 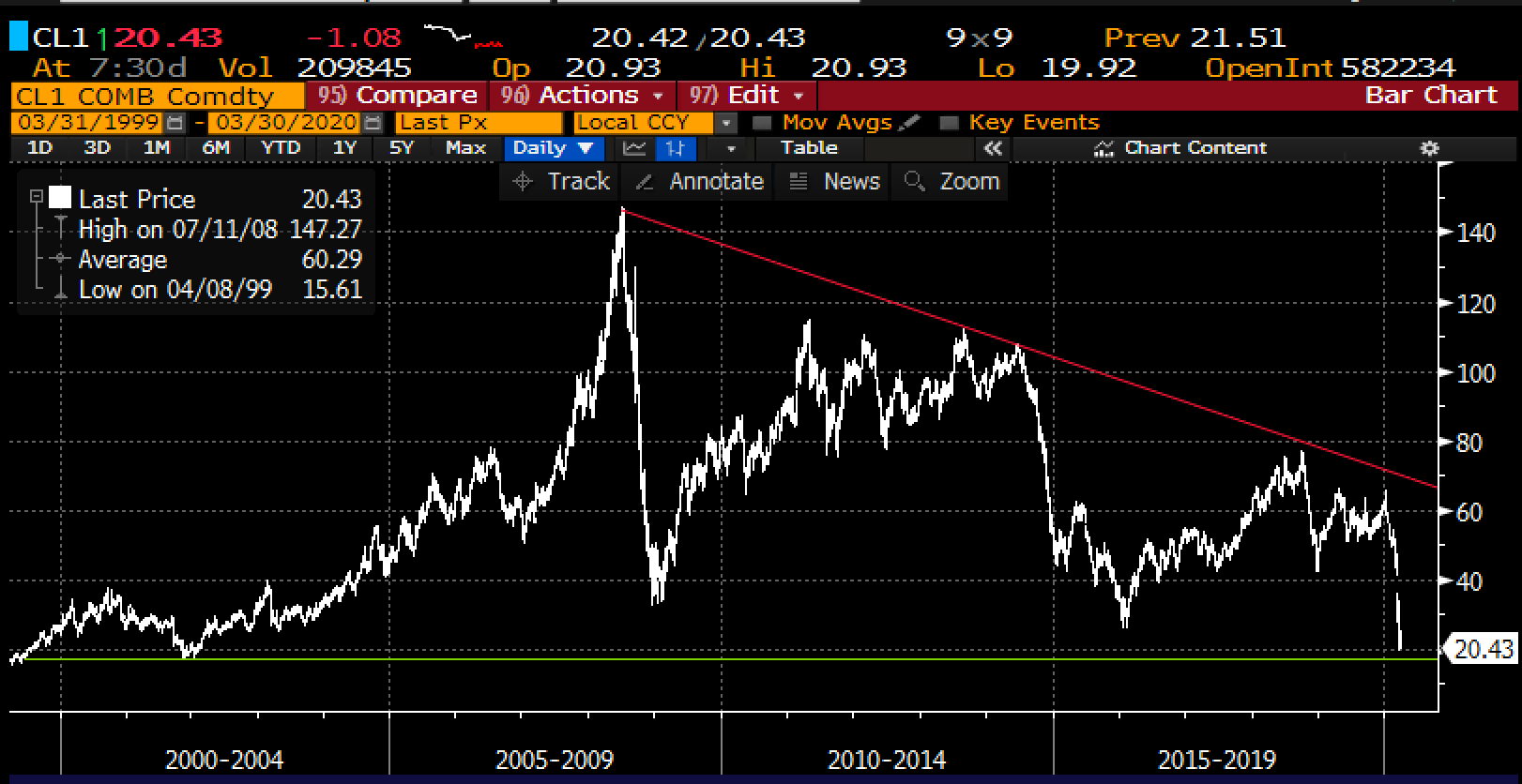 Why do we care what Ackman has to say? We don’t but he is the one who went on TV and freaked the you know what out and gauging his sentiment might for the near-term be a useful market timing tool. Last week, the day the stock market closed near its lows, and the low of this cycle, David Tepper, the billionaire founder of hedge fund firm Appaloosa Management (and owner of the Carolina Panthers) went on Scott Wapner’s show on CNBC (watch here), the show that Ackman appeared on the week before, and offered a similarly sober outlook for the economy and markets if we can’t get the virus’s spread under control soon, but his comments did not inspire fear, this is all I had to say about that:

As for the stock market… those long term downtrends in rates and oil are pretty powerful, and if we are to draw a line off the bottom of the 2009 lows, you see that the S&P 500 (SPX) is teetering as I write at that 10-year uptrend: 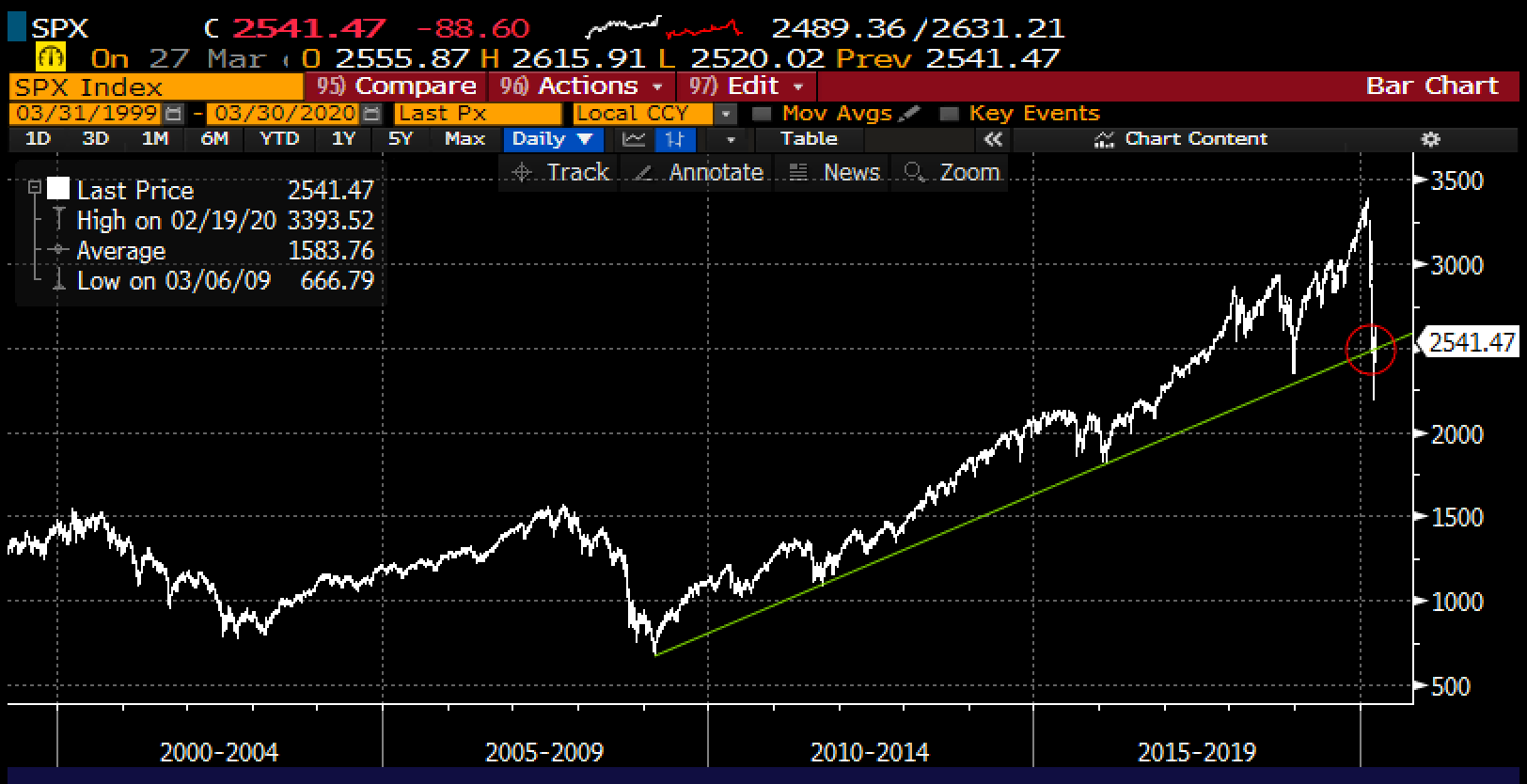 Last night after trump extended the guidance for social distancing originally from his Easter Sunday “back to work” call, now to April 30th the S&P futures were down more than 2%, but now up 40 bps… that is a precarious bounce at best. It is my view that the stock market might have a few bottoms, but the problems ailing it will take time to heal and I would. be surprised if we do not re-tets last Monday’s lows in the coming weeks/months which might also include a restest of the late 2016 breakout near 2130.