Yesterday on the close, the S&P 500 (SPX) closed up more than 6%, completing the stock markets first three-day winning streak in months. The venerable Wall Street Journal sent out this alert at 4 pm eastern:

It looks like the @WSJ is letting the interns write the headlines again. pic.twitter.com/hfEIGxkmyA

Of all of the dumb things that I have seen of late during this financial markets crash, this is up there. WIth today;s 3% decline will the A1 story in the WSJ today read: Stock Market Renters Bear Market??

But it was some of the comments in response to my tweet that reminded me just how skeptical the investing public is of financial news outlets. My observation is purely anecdotal, obviously, those who follow the markets, and are on Twitter are a fairly select group, possibly a group that is using technology that has democratized the ability of the “Regular Joe” on Main Street to amplify his gripes to the power brokers of Wall Street.

This mistrust from this subset of retail investors is deep-rooted, dating back to the dotcom crash of 2000 and the financial crisis of 2008/09. In each of these situations, Wall Street sucked the retail investor in, first with wild promises of how a new crop of tech, telecom, and media companies was to change the world as we know it, and the stratospheric valuations of the stocks that tracked them were the way to cash in on the newfound tech euphoria that would soon be upon us. Well, the stocks crashed before the companies and their stock promoters could deliver on that promise, And they did ultimately deliver on that promise, it just took about another 15 years to do so. This is is that a bubble looked like in the Nasdaq from 1997 to 2003, and as you might expect Main Street was left holding the bag, and sowing the seeds of distrust of financial institutions and those that report on them: 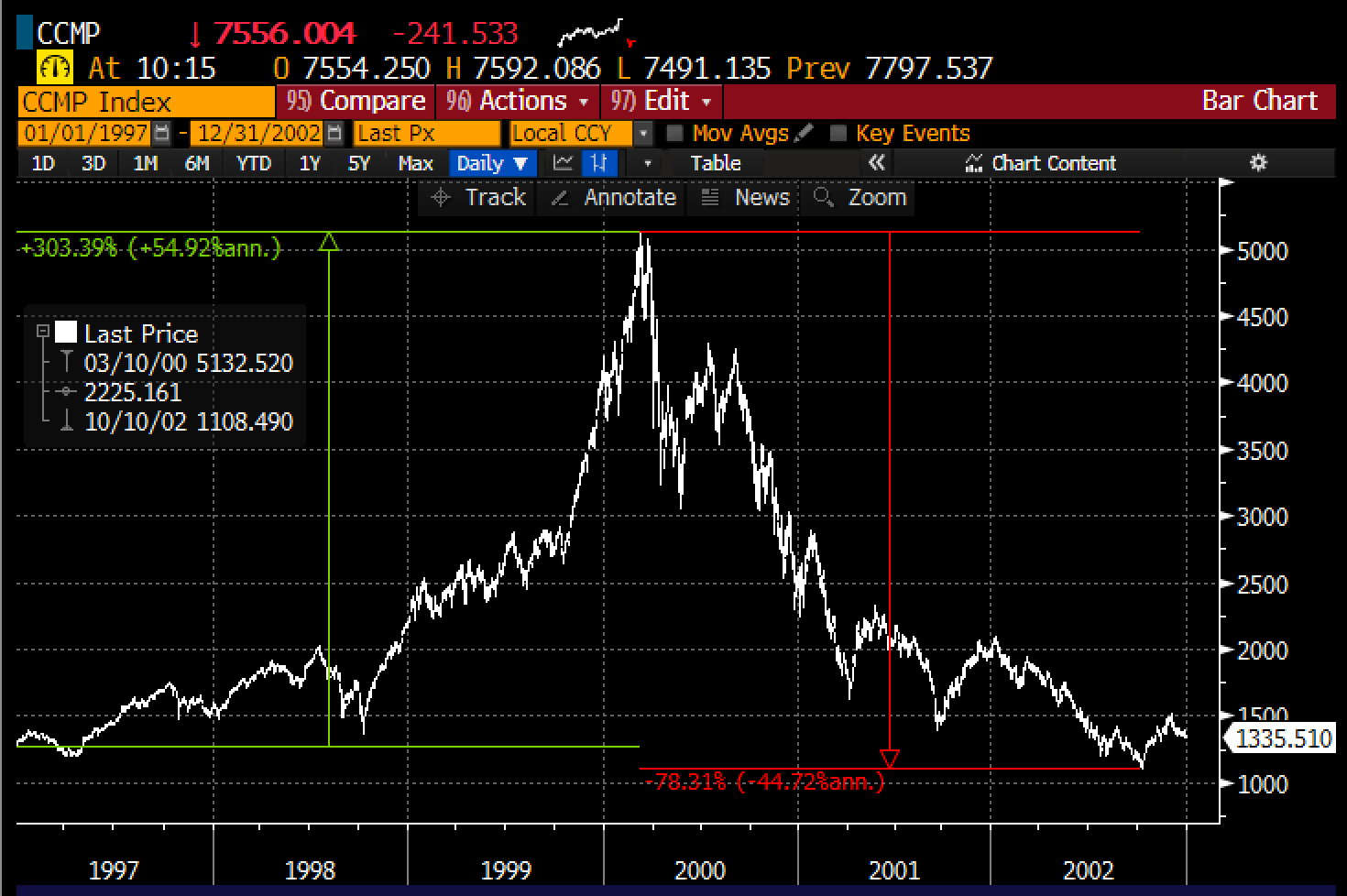 The next time around, investors got sucked into the promise of the economic American Dream as expressed through the housing market, and the belief that every American, regardless of credit quality has the right to borrow to own a home. Wall Street was able to offer those loans with the help of really low-interest rates, a holdover from the prior recession in 2001 and the bank’s use of leverage and financial engineering. Well, when the financial engineering was revealed for what it was (voodoo economics) as soon as default rates started to spike as valuations got to unsustainable levels, once again Main Street was left holding the bag on houses they couldn’t afford, structure notes back by the credit of the issuing banks that were imploding and a careening stock market that saw the SPX lose 57% from its all-time high in November 2007: 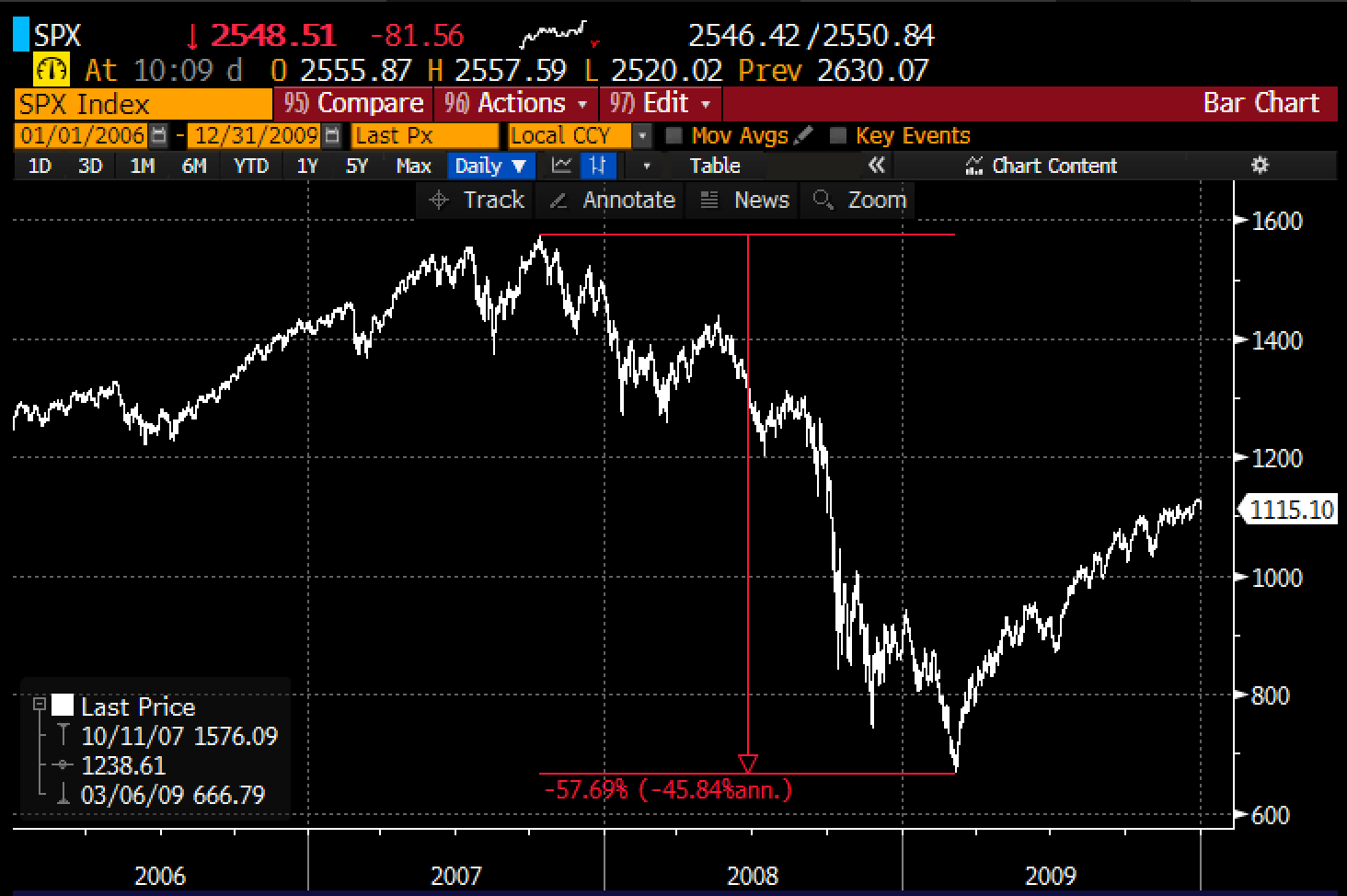 But here is the thing, as I said in a post last week (Stay In Your Lane Bro)…, “hate the message, not the messenger”…it’s my belief after 25 years in this business that the headline writers are fairly clueless more interested in a click than nailing the context of the content, in many cases, they can be the interns as I joked about in my tweet. It is the Op-Eds and Editorial Board pieces that you need to be discerning about. For those new to following financial markets and reading The WSJ and the NYT Business section, you need to realize that its OpEds are where the financial malpractice likely occurs, guys like the current chair of the National Economic Council in the White House, and long time CNBC pundit before that has been contradicting economic realities for decades, per the Washington Post in 2018:

“Despite all the doom and gloom from the economic pessimistas, the resilient U.S. economy continues moving ahead,” Kudlow wrote on Dec. 7, 2007, in National Review, predicting that gloomy forecasters would “wind up with egg on their faces.” Kudlow, who previously derided as “bubbleheads” those who warned about a housing bubble, now wrote that “very positive” news in housing should “cushion” falling home sales and prices.

“There’s no recession coming. The pessimistas were wrong. It’s not going to happen,” wrote Kudlow. “ . . . The Bush boom is alive and well. It’s finishing up its sixth consecutive year with more to come. Yes, it’s still the greatest story never told.”

He is as the kids say “the worst”. But he wasn’t always wrong, he had the trade war right before he went to work for trump:

Director of National Economic Council Larry Kudlow back in August 2015 when global markets were in the throes of a China-induced growth scare.

So my advice for Joe Main Street Investor, find commentators, brokers, financial advisors that you trust, who are transparent, who are telling it to you straight. These are all easy enough to verify, and when they try to rewrite their own history, well then you know what to do, Unfollow!  As for headlines, let’s just continue to have a laugh at ill-informed titles above the fold and not read too much into them when it comes to our investing.