When investors look back to 2019’s stock market performance, with the S&P 500 (SPX) up about  30%, despite no earnings growth for the index of 500 stocks, the inversion of the U.S.Treasury curve in the summer, the massive failing of unicorn IPOs (Uber & LYFT), not to mention those that didn’t even make to marker (WeWork) and of course Tesla’s (TSLA) wild ride, they might be willing to concede that we had something coming in 2020.

When the story is finally written about the market crash and the impending recession of 2020, there will be no shortage of asterisks and footnotes. One situation that repeatedly caught my attention in 2019 was the volatility of TSLA’s stock, its CEO, its balance sheet, its profitability, and its quarterly deliveries. The most obvious way to view this volatility was through the lens of the stock market, where investors sold the stock down 50% from its highs in January to its lows in June then up 136% to end the year very near an all-time high as the company shore up its balance sheet with a massive capital raise and upside to its earnings targets. 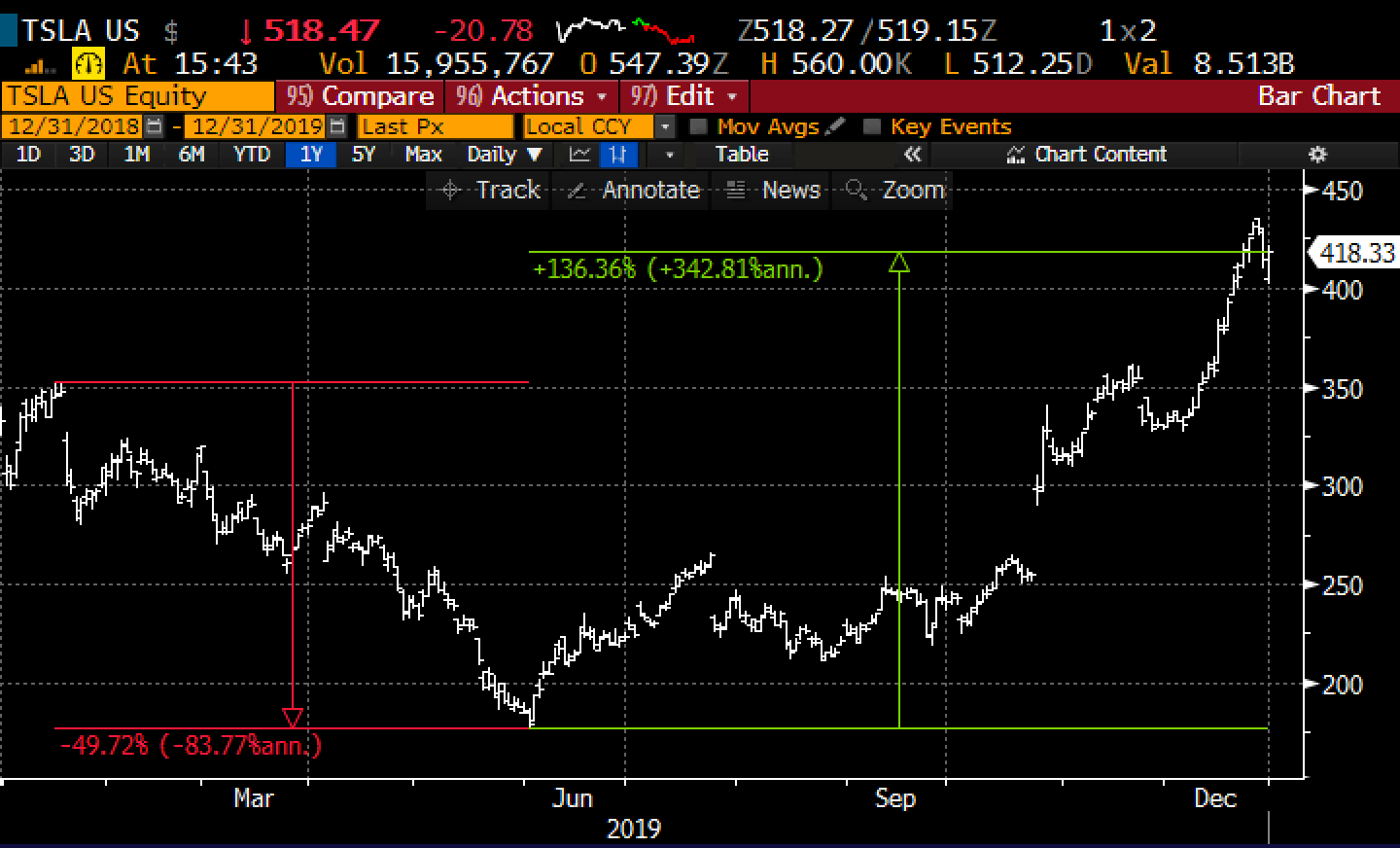 For much of 2019, my view was that TSLA’s product and its balance sheet was a recession away from reckoning as there would be little demand for mass-market electric vehicles that cost around $50k or luxury sedans upwards of $110k.

Well you know how 2020 started, pure euphoria for most growth stocks and TSLA was leading the way, at its highs in early February, the stock had doubled in a little more than a month sporting a market cap that was 2x that of General Motors and Ford combined. Sheer Lunacy. At its recent lows, the stock was down 63% from its highs and is now about 45% from last week’s lows. That $350 breakout level from late last year served as important technical support, nearly to the penny. 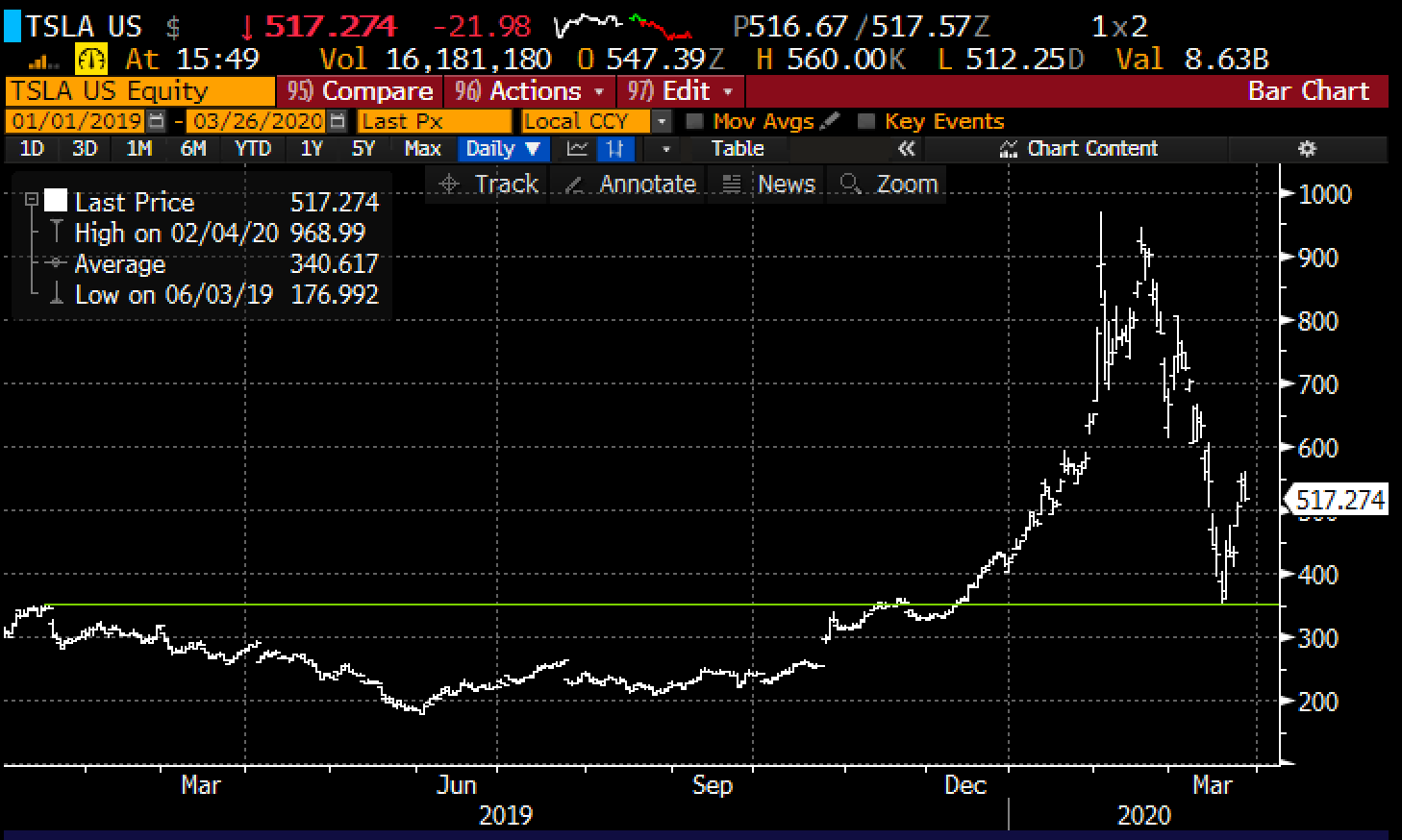 No matter what happens with the stock market, the U.S. and global economy for at least the next few months, maybe the next few quarters will be massively constrained and I am not sure the purchase of overpriced electric vehicles will be top of mind for most global citizens, especially when you consider crude oil at levels below its lows during the financial crisis: 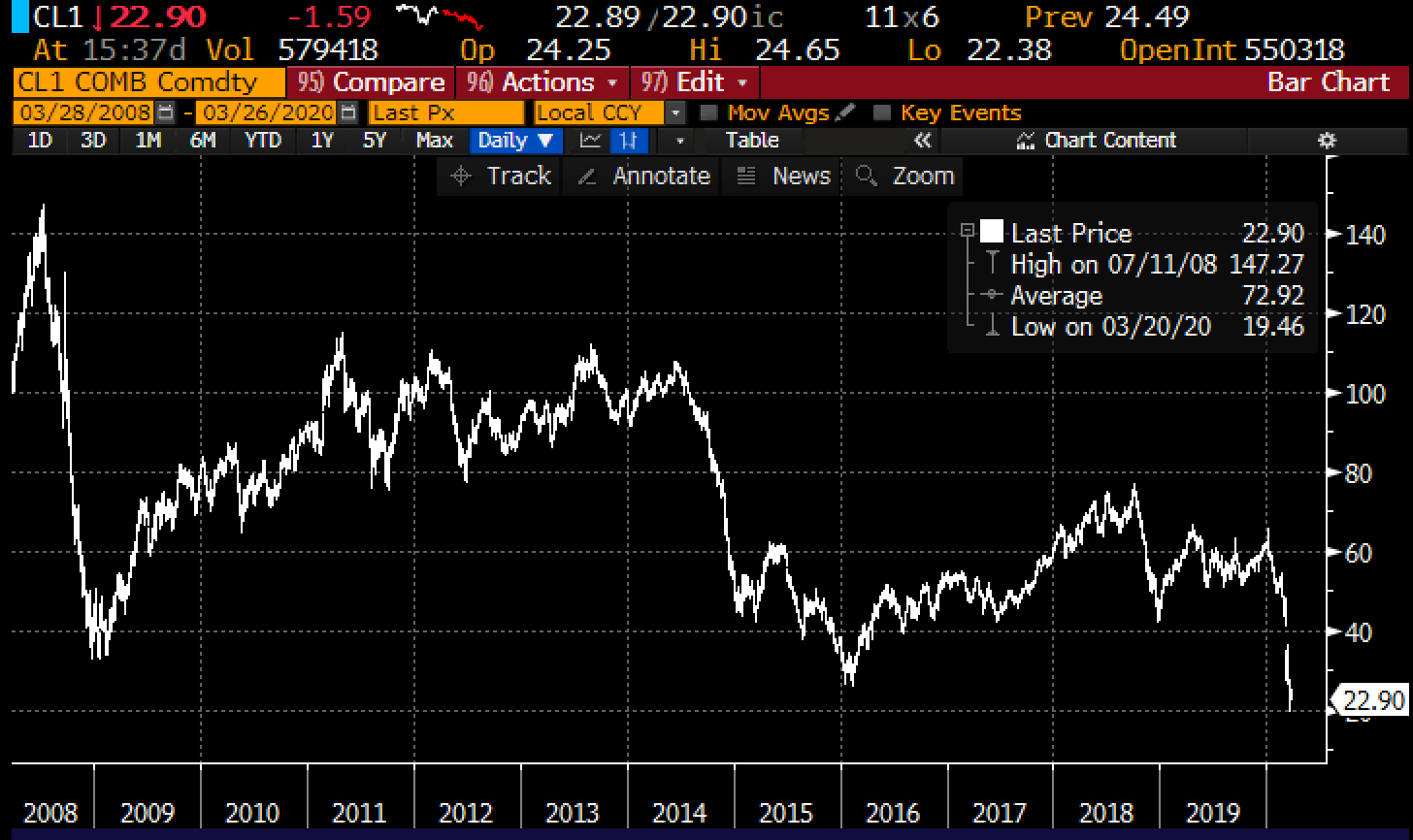 Shares of TSLA are still up 25% on the year, I think it has to be one of very few stocks with market caps near $100 billion that are up on the year.

Short-dated options prices reflect what is likely greater uncertainty for such a niche product at a time where its much larger competitors are getting destroyed in the equity and credit markets, rating agencies are downgrading them, they are stopping production of their plants and are likely to continue to see massive disruption in their supply chains, How the hell is TSLA not a $250 stock you ask?? I am not sure we can blame it on the shorts anymore as the short interest has come in from 25% of the float last year to about 11% at current levels. By options market, makers are pricing in risk, with 30-day at the money implied volatility near 115% implying high single-digit percentage moves.

I suspect in the near term we see the stock and volatility come in, both appear to be hanging on for deal life.

If I were looking to lean to the short side but looking to finance puts that will catch their Q1 earnings report that should come in the last week of April I might consider put calendars, selling one short dated out of the money put and using the premium received to help finance the purchase of a longer-dated call of the same strike, For instance:

The max risk of the trade idea is the $43 in premium and could be lost if the stock were much higher than the current price or much lower than the 475 strike.

The rationale for a trade idea like this is to pick a direction, but use the high price of short-dated options to offset some of the extrinsic value of the put that you are buying while giving yourself some room to the downside between now and next week’s weekly expiration.

This trade structure also offers a good bit of “optionality” depending on where the stock is next Friday, and I will be sure to update and go through the different ways to manage the trade by possibly turning into a calendar again by selling another 475 put in another expriey prior to May, or possibly turning into a vertical put spread by selling a lower strike put in May expiration.