As I prepare to go on CNBC’s Closing Bell program today at 3 pm I will most definitely be asked about my last appearance on Feb 7th when I gave my Last Chance Trade detailing my bearish view on the U.S. Treasury Yields, expressed through being long the TLT, the iShares 20yr US Treasury bond ETF:

Into the close! @RiskReversal‘s last chance trade is TLT. pic.twitter.com/XPZPXzjn95

Well if you watched the video it was clear that I thought yields would break support in the 10yr between 1.4% & 1.3% and ultimately go below 1%.  Now you can say that even a blind squirrel finds a nut every so often, but that’s exactly what happened, and since Feb 7th, with the help of Tuesday’s surprise 50 bps cut to the Fed Funds rate, the 10-year Treasury yield has been cut in a half. 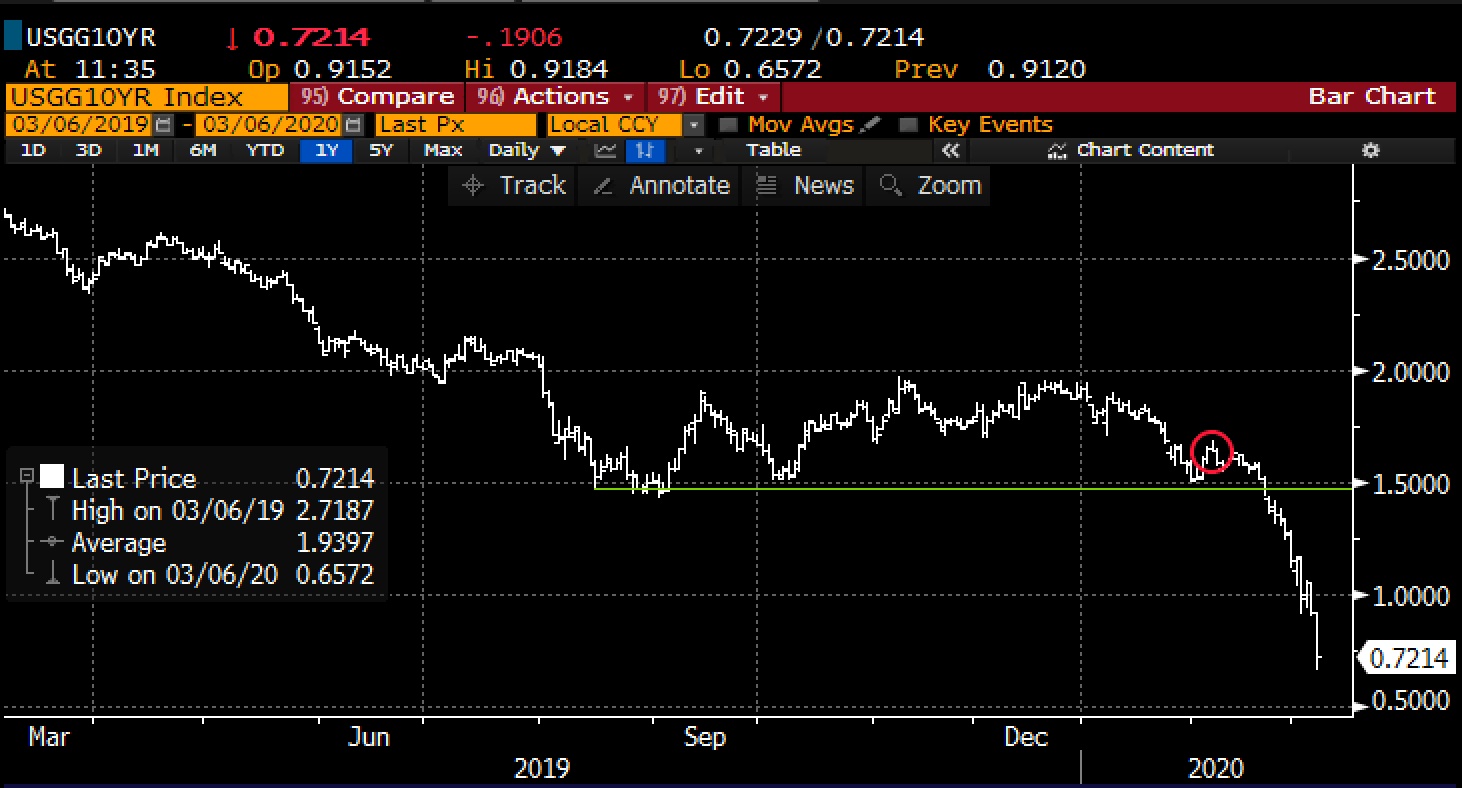 As regular readers know, I have been rolling this bullish view on TLT up and out but earlier in the week I closed this view, a tad early too (read here).

The TLT’s gap today is unprecedented, but interestingly off 2% from its earlier highs, which could have signaled an outright panic, especially when you consider that the Fed is more likely to be a focus on quantitative easing measures comparted to cutting rates to zero in an effort to bridge monetary to fiscal stimulus before they are forced too early to go to zero, as they desperately want to avoid having to go to negative rates as is the case in Europe and Japan.

Could we see a quick snapback in rates in the coming days/weeks/months, of course, but there are a lot of moving parts, but pressing yields to the zero bound at this point seems to be a bit dangerous.

At this point, it might. make sense to play for a pull-back in the coming months to the breakout level near $150, which is exactly where it would go if the coronavirus did not spread as feared in the U.S. in the coming months and the Fed merely takes their foot off the pedal: 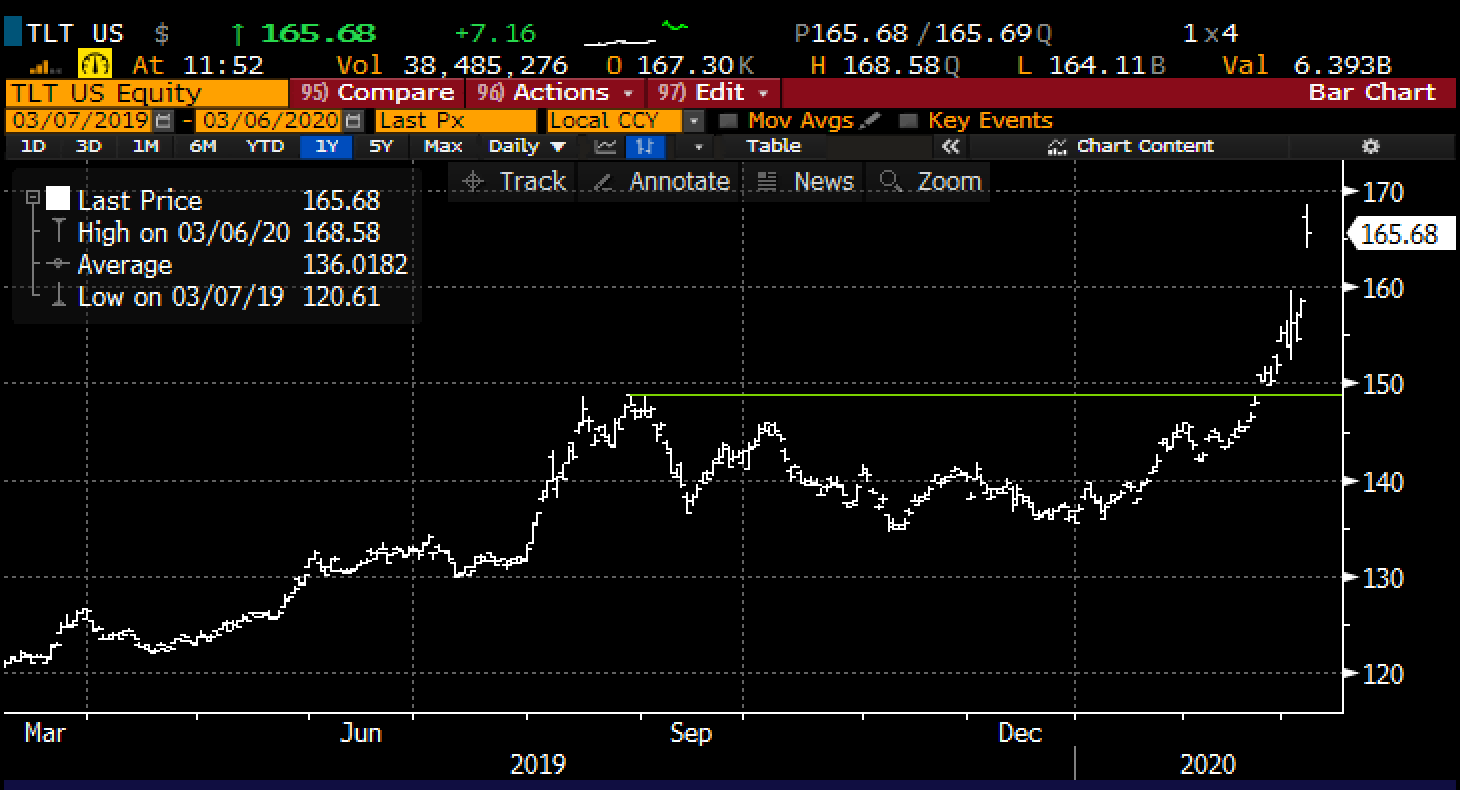 So what’s the trade? I think it makes sense to fade the panic, but look to shorten the duration of the U.S. Treasuries, the IEF ETF the iShares 7-10 year Treasury Bond ETF that recently broke out at $115 and could re-test that level once the fever breaks… 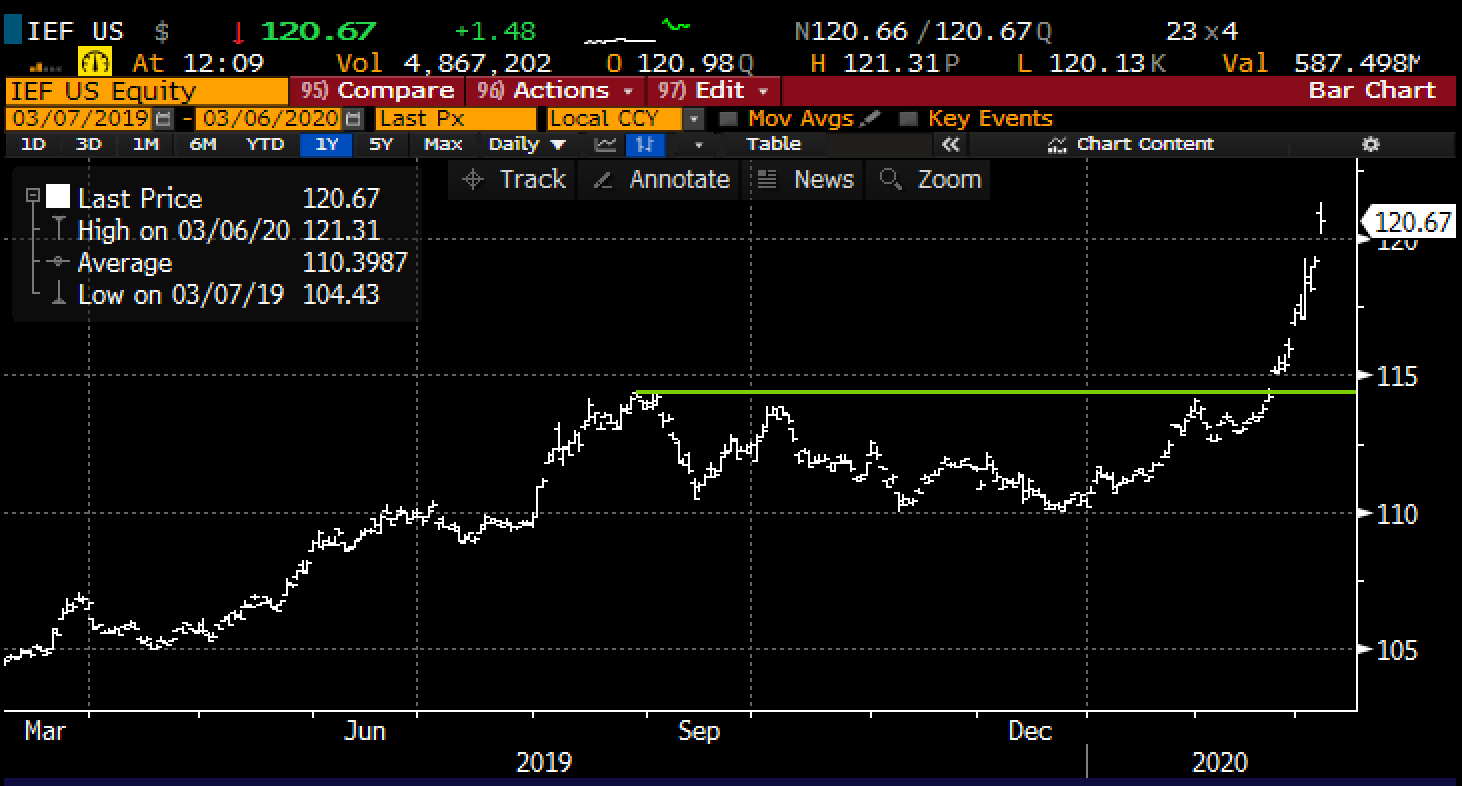 Rationale: this trade idea risks 1.25% of the etf price and has a max profit potential of 3x the premium ar risk if the IEF is down 5% in two and half months.

If options are not your thing, the TBT, the ProShares UltraShort 20Yr etf is another way to play, but I don’t generally love this levered etfs.