Disney (DIS) will report its fiscal Q1 results today after the close. The options market is implying about a 6% (or $9) one-day post-earnings move tomorrow, which is rich to the 2.5% average the stock has moved the day following the last four quarters.

Shares of DIS are flat on the year, having just rallied 7% from last week’s lows, but still down about 6% from its all-time highs made in late November. The stock has very staunch technical support near the April gap level and near-term technical resistance near the prior highs just above $150: 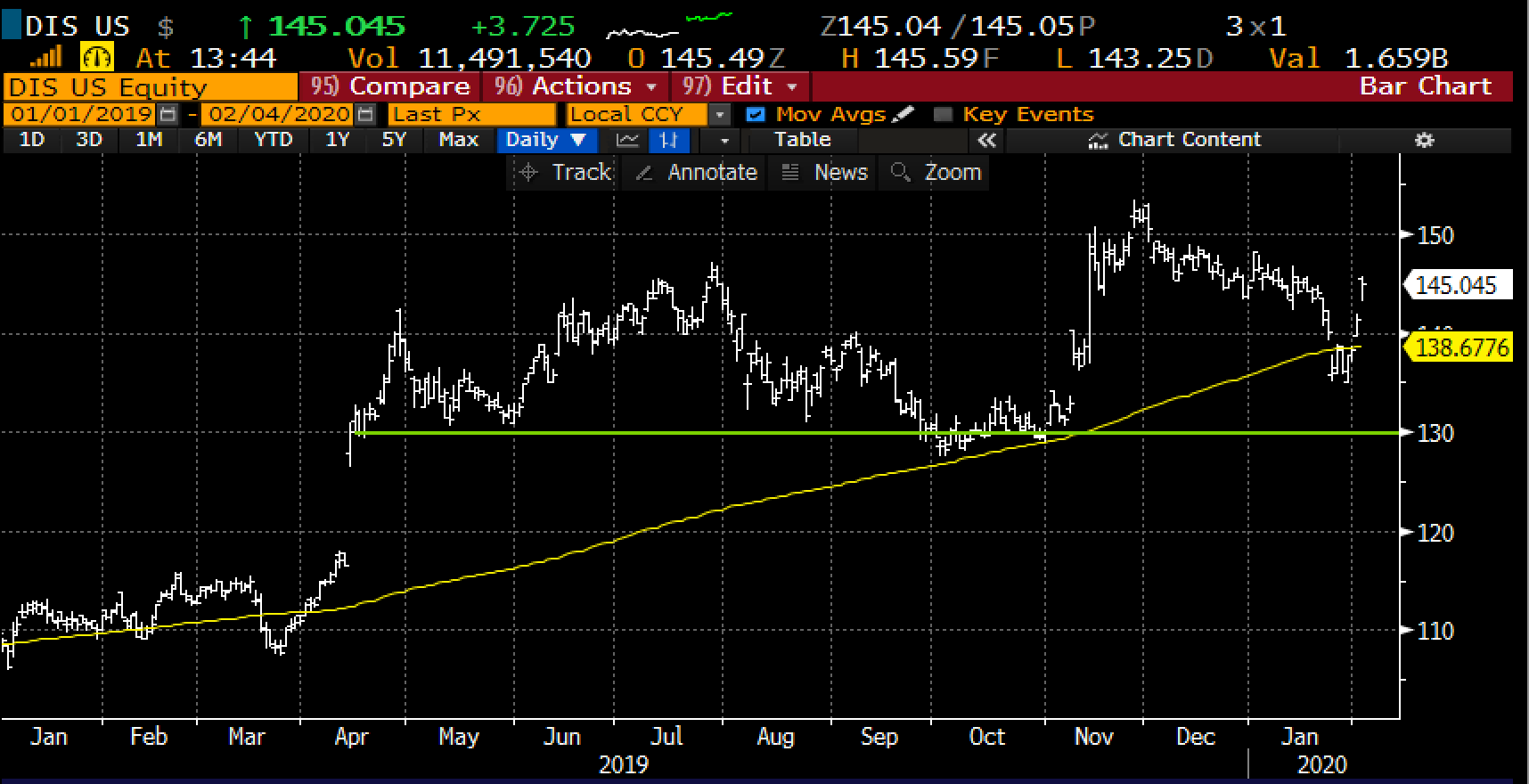 Per Barron’s, here is what to expect in the quarter:

Streaming investments and the integration of the former Fox assets have weighed on Disney’s bottom line in recent quarters. The company’s fiscal fourth-quarter earnings, reported on Nov. 7, 2019, fell 28% from a year earlier. That was despite a 34% rise in revenues reflecting the incorporation of 21st Century Fox. Still, results were better than expected: adjusted earnings were $1.07 per share, while analysts had forecast 95 cents. Sales came in at $19 billion, about equal to what Wall Street had been expecting. Disney shares rose 3.8% the following day.

• For its most recent quarter, the first of its fiscal 2020, Disney is expected to report $1.47 in adjusted earnings per share, down from $1.84 in the same period in fiscal 2019. Revenue is estimated to come in at $20.8 billion, versus $15.3 billion a year earlier. Analysts forecast $4.6 billion in adjusted earnings before interest, taxes, depreciation, and amortization, which would be up from $4.2 billion last year.

Short-dated options prices are trading at a 52-week and at 4-year highs, making long premium directional trades into the print challenged, you could get the direction right but the magnitude of the move wrong and still lose money:

So what’s the trade? Investors seem to give any near-term hiccups from the coronavirus in their parks and studios business a pass and seem myopically focused on subscriber additions for their Disney + streaming service.

Rationale: this long premium directional strategy helps to mitigate the high cost of options by selling two of the out of the target strike price while allowing for profits above that price and a very wide range higher, but capped at a price. This trade idea risks 1.4% of the stock price and offers a potential profit potential of 4x the premium ar risk if the stock is up 7% in the next three trading days.

On the flip side, if I were long DIS and worried that the company could miss and offer guidance that could cause bulls to hit the pause button and possibly re-test the $130 support level, BUT i was just looking for some protection near-term, I might consider a collar… selling an out of the money call and purchasing an out of the money put… this strategy caps gains in the stock to the short call strike and, has losses down to the long put strike, but offers protection below. My friend Mike Khouw described a similar trade he saw in the market on last night’s Fast Money on CNBC:

Will it be a magical quarter for Disney? One options trader doesn’t think so. @Michael_Khouw has the details $DIS pic.twitter.com/Iw6XG7wq8R