General Motors (GM) will report its Q4 results Wednesday before the market open. The options market is implying about a 4.5% one-day post-earnings move, which is double the average movement over the last four quarters. 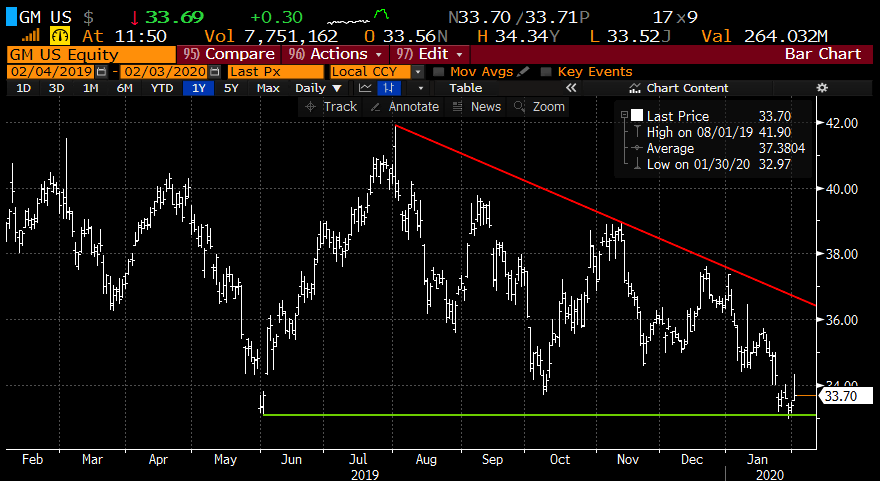 To call last week’s low a double bottom though might be a little premature, if the stock were to break below $33, the chart since its re-IPO shows just how precarious the stock  might  be sitting on the long-term uptrend: 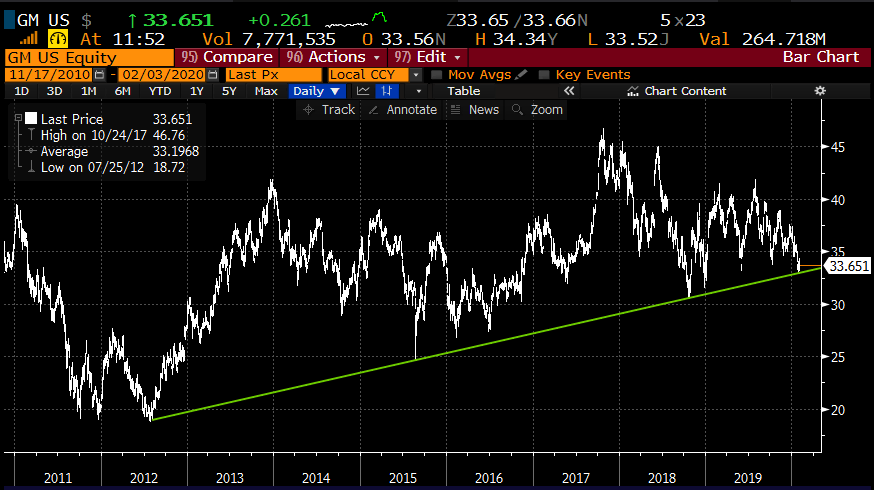 Despite the stock’s poor performance over the last year, Wall Street analyst remains fairly Bullish on the stock with 16 Buy Ratings, 5 Holds and No Sells, with an average 12-month price target of $48 or 40% higher than current levels. This is in stark contrast to competitor Ford (F) where only 8 analysts rate the stock a buy, 11 a Hold and 2 a sell with an average 12-month price target of about $10, or about 11% higher than current levels.

As shares of GM have re-tested the June lows into earnings, short-dated options prices have ticked up, making it slightly challenged those looking to express near-term for long premium directional views.

The stock trading at 7x trailing, 6x forward is fairly cheap to the market, its peers and its own history. But auto stocks have been value-traps for decades. In Jan the company’s autonomous division Cruise unveiled the Origin, a car meant for ride-hailing services. And if you caught their ad during the SuperBowl, the company is readying an electric Hummer to be unveiled in May. Given the fact that Tesla (TSLA) has gained te market cap of GM in just the last few months, maybe autonomous and EV rollouts in 2020 help electrify GM’s stock this year.

This trade performs best with a gradual move towards the 36 strike over the next two and half weeks into Feb expiration. If the stock is below 36 on Feb expiration then the short 36 call will expire worthless and the trade will be left naked long the June 36 call. If the stock is close to 36 then the June 36 call would have appreciated as it will have picked up deltas. At that point, it might make sense to further reduce the premium at risk by selling a higher strike call in June expiration turning the trade into a vertical call spread. The max risk of this trade is the 80 cents premium paid, and would be at risk with a large move below the current level, or well above the 36 strike.

Rationale: this trade idea risks less than 3% of the stock price, and offers a way to leg into a call spread playing for a technical breakout and catalysts in the spring.