Semiconductor stocks have massively outperformed the broad market since the start of Jan 2019, with the SMH, the ETF that tracks the group gaining 60% vs the S&P 500’s (SPX) 30% gains and the Nasdaq’s (CCMP) 42% gains.

Over the past week there have been some interesting stock reactions to earnings results in the space. For instance, Intel (INTC) posted a beat and a raise and the stock went up nearly 10% in a straight line, gapping to new multiyear highs (it has since filled in some of that gap: 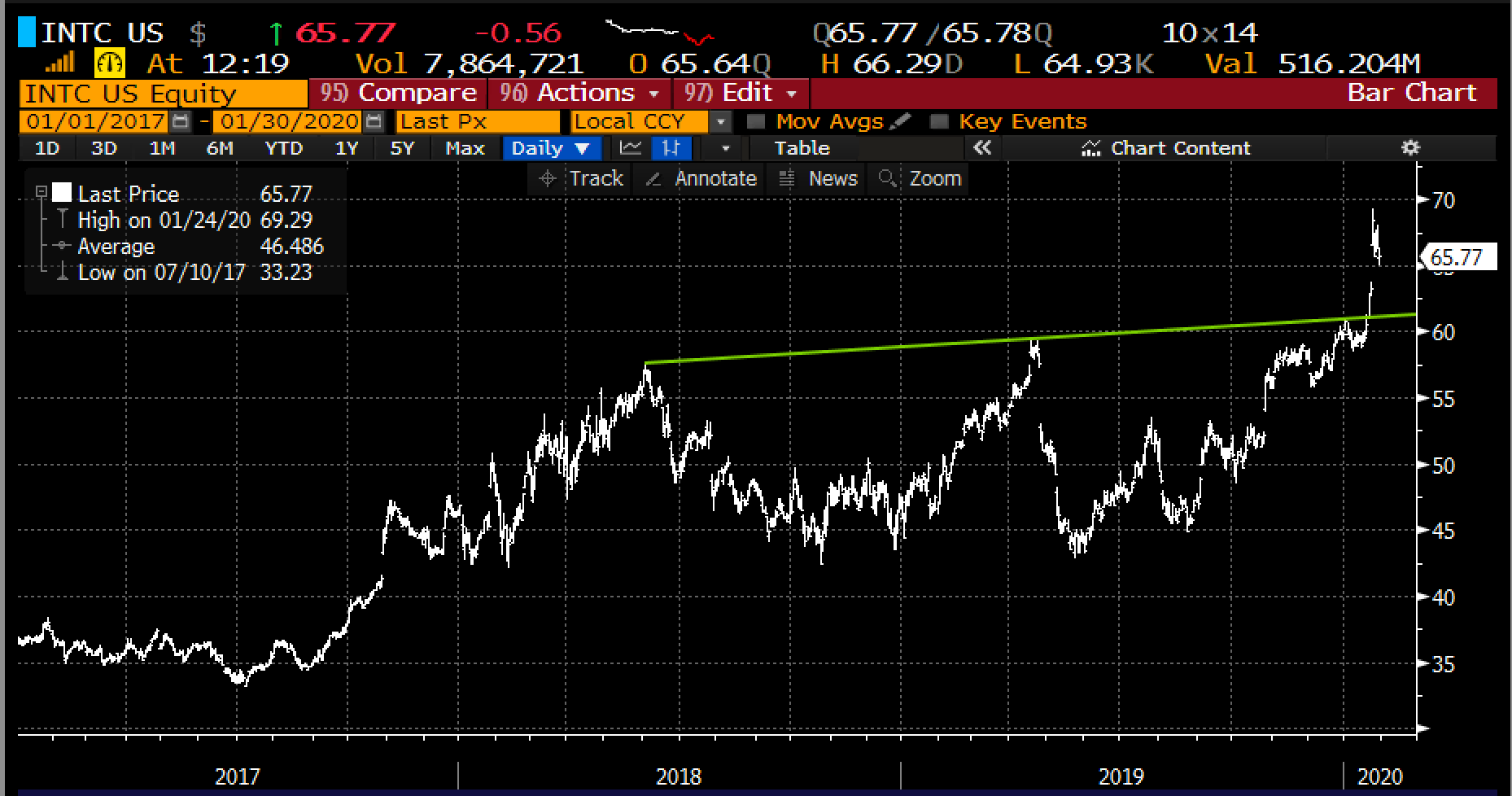 INTC’s archnemesis in CPUs, AMD, whose stock had rallied 90% from its lows in October to a new all-time high last week has sold off about 10% since late last week: 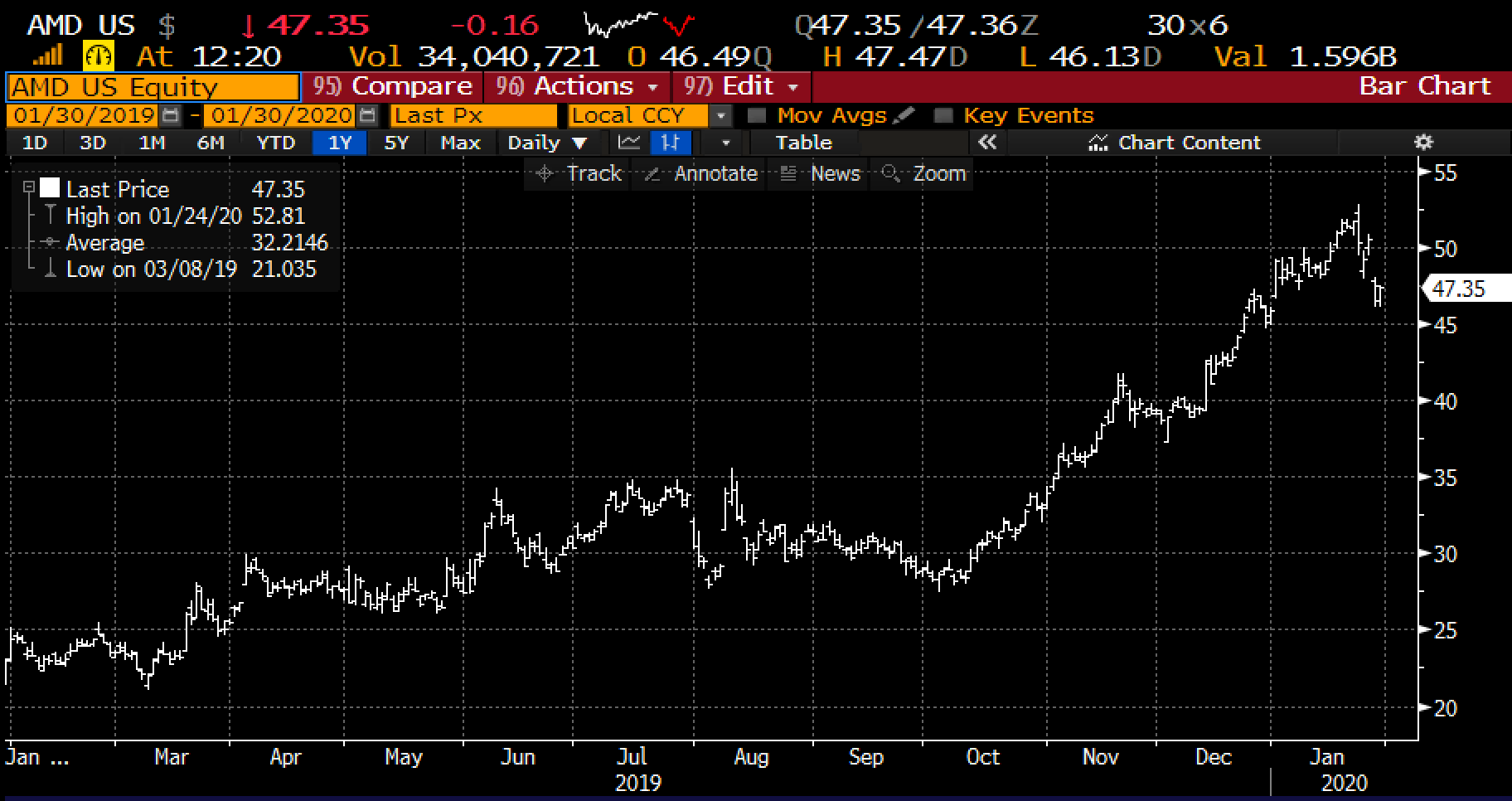 I guess one of the most surprising moves is not from a stock like INTC or AMD that had been at 52-week highs, but from Xilinx (XLNX) which gapped to a new 52-week low on a slight miss and a weaker than expected outlook, per Barron’s:

Is there something wrong with the vaunted 5G wireless rollout? That’s the question you have to ask after the ugly earnings report late Tuesday by the chip maker Xilinx.

The company’s December-quarter results proved disappointing, and its March-quarter forecast was worse. Xilinx (ticker: XLNX) disclosed weakness in both its wired and wireless components business, which it blamed in part on a slowdown in 5G network deployments, announcing a round of job cuts in response.

For its fiscal third quarter, ended Dec. 31, Xilinx posted revenue of $723 million, falling short of the Wall Street analyst consensus at $730.6 million. The figure was down 13% from the September quarter and fell 10% year over year. Profits were 68 cents a share, above the 59 cents Wall Street expected.

For the March quarter, the company projected revenue of $750 million to $780 million, sharply below the Wall Street consensus at $825.6 million.

In response, Xilinx announced plans to cut its global workforce by 7% through “a targeted reduction in force and meaningfully slower hiring to replace attrition.” That implies the loss of about 300 positions.

the company expects some of those headwinds “to be persistent, resulting in revenue growth lower than our prior expectations.”

If that sort of commentary came from a company whose stock was trading near highs I suspect it would have set off alarm bells throughout the space and specifically those with similar exposure, but I suspect largely being dismissed because of the stock’s poor performance over the last year, and maybe the job cuts causing some investors to think the company is merely executing poorly. The stock is now close to testing its Jan 2019 low, down 40% from its all-time high made last April:

To my eye, the 2018 breakout near $80, and the re-test and hold of that level in Dec 2018 in the throws of the dramatic sell-off appears to be pretty healthy near-term technical support:

I guess the one thing I would say thinking about XLNX’s exposure, their cause of weakness in their business, the actions they are taking to offset earnings declines, the stock’s underperformance over the last 8 months and specifically the new lows this week, that if the coronavirus were to become a real thing, not just a worry, and the precautions that are being taken now in China, and spreading to other parts of the world, will likely cause the sort of gut punch to the global economy that is NOT welcomed at this moment.  One of the hardest-hit groups will clearly be semiconductors as they were a proxy for improving global growth in 2019, and at the center of many of the secular trends in tech. Might XLNX be the canary in the coal mine?

So what’s the trade? looking at the SMH, you could look to buy the dip, and play for new highs assuming the coronavirus fears were to abate as I suspect you would see money flow right back into the group. But if this situation is truly unquantifiable and were to persist longer than expected, than SMH would likely re-test technical support at $130 in the coming weeks: 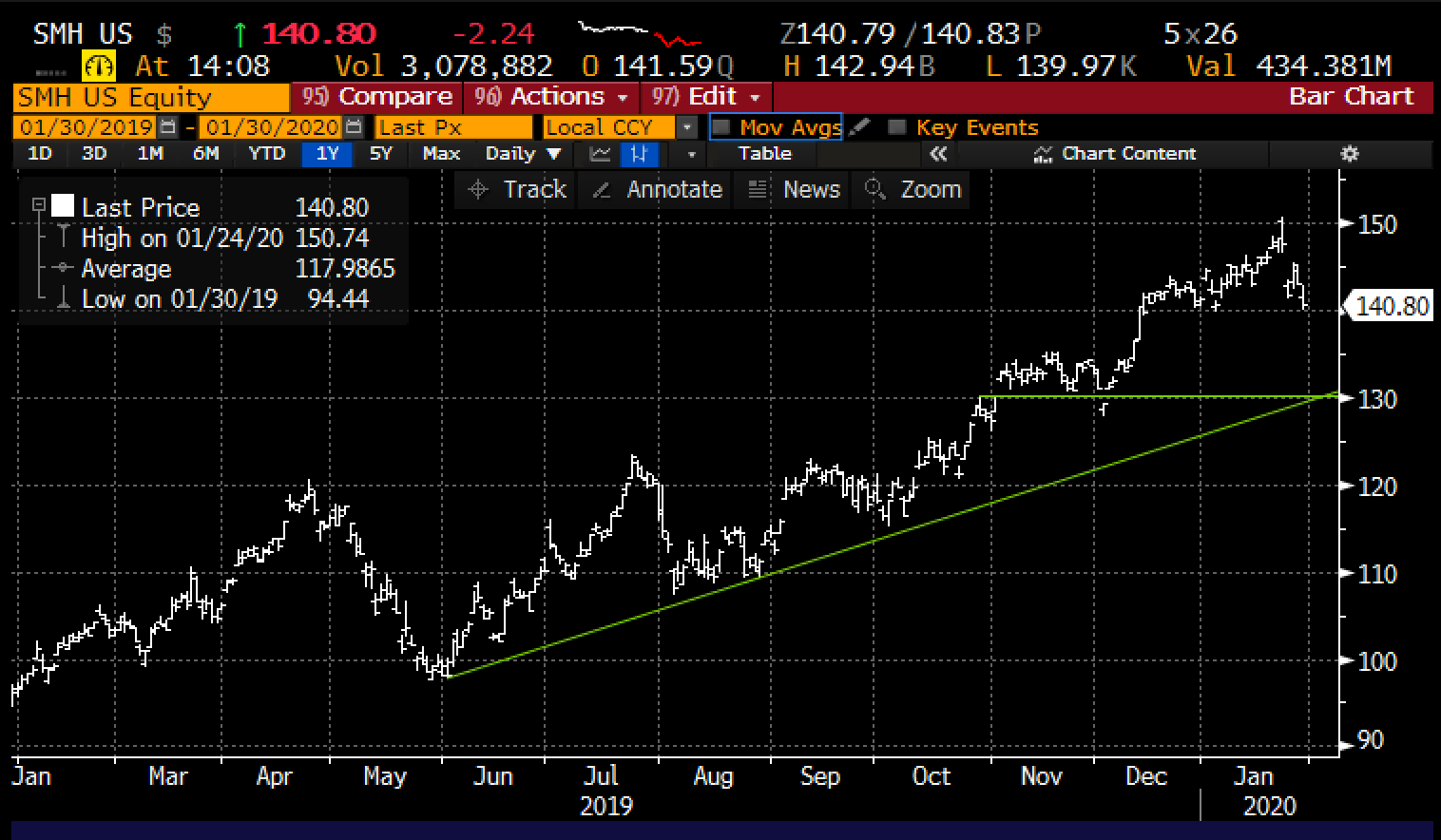 If I were looking to do with the defined risk I might target the early Dec low just below $130 over the next couple months, but I think at this point, given how we are getting a little whipsawed on a day to day basis based on little news regarding the virus, I think it makes sense to put trades on when the market is going the opposite the way you are looking to go… But I might look to add a March 140 put or 140-130 put spread on a bounce tomorrow.