On Jan 2nd I detailed a bullish case to play for a breakout to new all-time highs in Salesforce.com (CRM) and discussed on CNBC’s Fast Money:

Why might the stock breakout in early 2020? Well in 2019 investors were certainly fine with multiples expanding on “growth at a reasonable price”, like Apple (AAPL) and MSFT, if the market were to continue its tear higher, investors will look to play catch in names that have underperformed and a high valuation, high growth name like CRM which fits in plenty of buzzy tech narratives will likely benefit, despite its rich valuation.

The next identifiable catalyst for CRM will be their fiscal Q4 results in the first week of March, I suspect a breakout would likely come prior in the event that the broad market continues higher. I would also add that there seems to be a big disconnect on the sentiment front between Wall Street analysts who have 39 Buy ratings, only 3 Holds, and no Sells, with an average 12-month price target of $190 and investors who have hit the pause button over the last nine months.

The stock’s recent bounce from the multi-year uptrend near $145, suggests that it is the next level of support to the downside, down about 10%. Which brings me to how to play with defined risk

So what’s the trade? If I were looking to play for a breakout and a 10% rip following I might consider call spreads in Feb expiration:

Salesforce is trading near its all-time high. @RiskReversal makes his case for why more records are coming for $CRM. pic.twitter.com/NfVyMJ2FK3

The stock over the last week has been up nearly 9% in a straight line, breakout out to new all-time highs, and the Feb 170 – 185 call spread that cost $3 when the stock was $166 is now worth $9 with the stock at $180.50. This trade originally risked $3, or less than 2% of the stock price, but now with the stock at $180, the risks 5% of the stock price, but importantly risks $6 in profits and only has the potential to make another $6, so now risking $9 to make another $6 over the next five weeks. Not a great risk-reward anymore.

If I were inclined to roll this bullish view up and out I might consider rolling the $6 profit into a call spread in March, for instance with the stock at $180,50 you could buy the March 185 – 200 call spread for $4, buying 1 March 185 call for $6 and selling 1 March 200 call at $2, the max risk is $4 below 185 with losses of up to 4 between 180 and 184 and gains of up to 16 between 184 and 200 with max gain of 16 above 200. This trade idea has a better risk-reward than staying long last week’s trade idea given profits already made and allows for more time for the bullish view to play out while also catching their fiscal Q4 earnings in early March.

Obviously, if you were just playing for the breakout, then I’d be inclined to take the trade and move on and look for possibly a period of consolidation and look to re-enter on the long side, past technical resistance should become support. I would again be a buyer at the breakout level below $170: 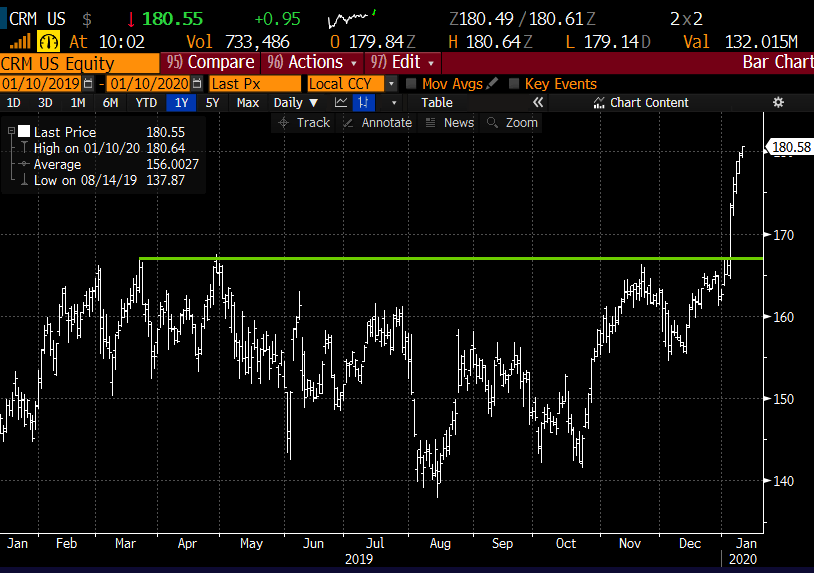