Back on November 1st, after reporting a surprise Q3 miss, shares of Pinterest (PINS) declined 17%, trading below its April IPO price of $19 for the first time ever, and down nearly 50% from its August highs. At the time RBC Capital’s star internet analyst Mark Mahaney, who had recently upgraded the stock to a Buy, had the following to say about the print in a research note:

Mixed Q3 Results: Revenue growth decelerated to 47% Y/Y, reaching $280MM — ~$1MM below Street, partially due to a tougher comp related to the rollout of successful video ads and conversion optimizations products in H2:18. U.S. Revenue (~90% of total) of $251MM was driven by success with CPG, D2C and SMB advertisers. EBITDA of $4MM was much better vs. Street @ ($22MM), largely due to better than expected S&M and R&D leverage and marks PINS first EBITDA+ Q3. PINS Q4 guide came in below the Street on both Revenue and EBITDA, however. Fundamentals were mixed in Q3 with Revenue Growth decelerating 15 pts (tho on a tougher comp), while Gross Margin +420 bps Y/Y, and EBITDA inflected positive.

Investors appeared to be most concerned with the revenue deceleration, specifically ARPU, average revenue per user for a company that despite an expected $9 million adjusted net income loss on an expected $1.1 billion in sales in 2019. Sales growth and small adjusted loss was a pillar of the bull case, with sales expected to grow 35% in 2020 and 31% in 2021, that 3 handle needs to hold firm. GAAP profitability though is not expected until 2023. But vs many peers in their 2019 tech IPO class, they are losing far less on an adjusted basis to achieve that sales and user growth. Wall Street analysts remain fairly mixed on the stock with 11 Buy ratings and 12 Holds, with an average 12-month price target of $27.

The next identifiable catalyst will be the company’s Q4 results expected in mid-Febraury. Any upside to 2020 guidance and I suspect the stock could re-test prior support at $25: 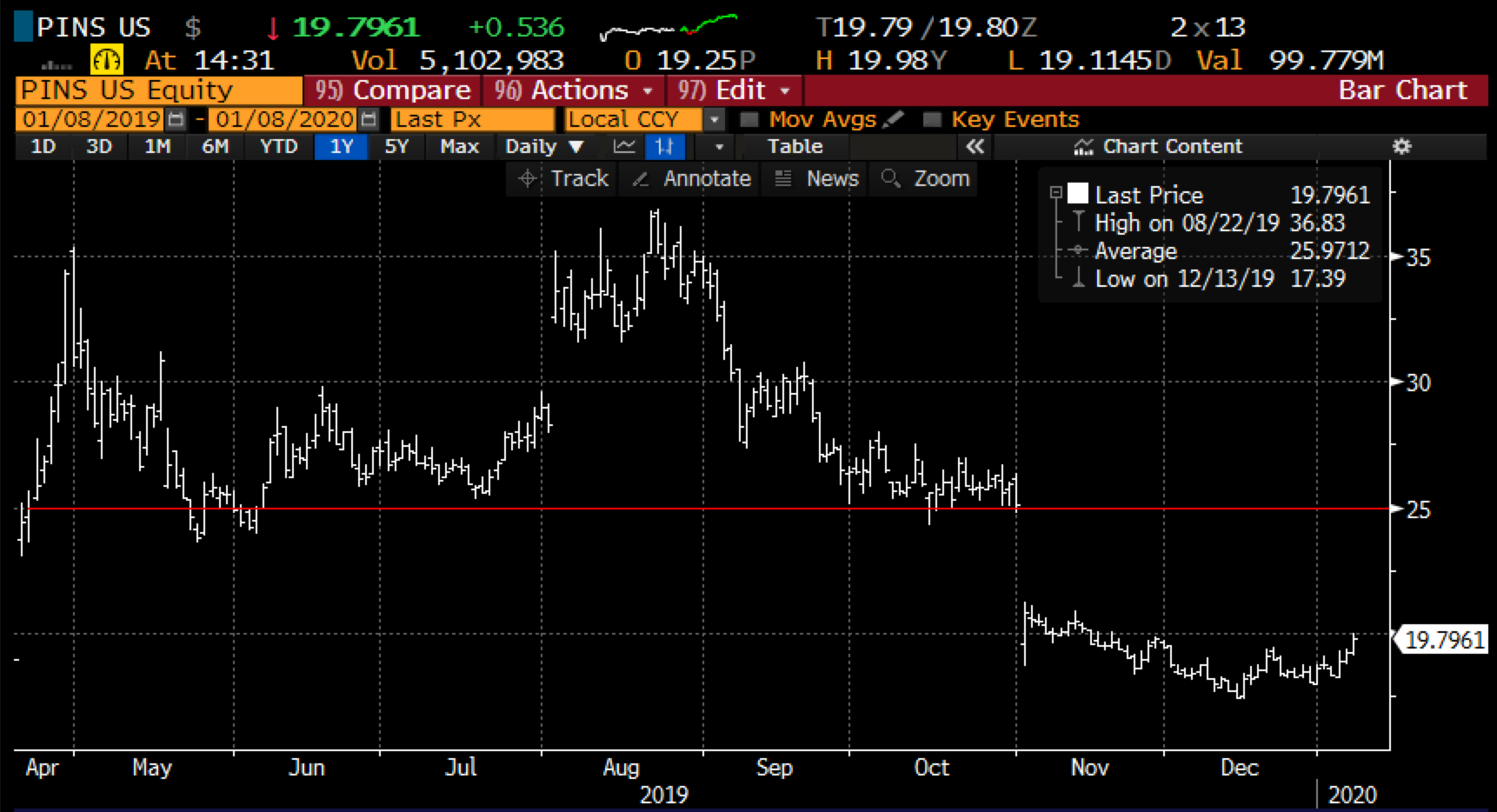 The stock feels like it wants to make that run regardless of earnings in a market that also feels a bit squeezy at the moment. I suspect that internet ad models in niches like PINS could catch some interest in this election year as company’s like Facebook, Twitter and Alphabet’s Google will continue to get lots of scrutiny with fear of regulation around every corner, despite continued torrid growth rates… which when its all said and done, might shed a relatively positive light on ad model’s like PINS.

If I were inclined to play for a Q1 breakout above $20 and a re-test of $25, with short-dated options prices near its all-time lows, long premium trade ideas with defined risk look attractive:

There are two trade ideas I might consider, one for just earnings playing for $25…. and the other longer-dated playing for possible m&a interest…

this trade idea risks 6% of the stock price for the next six weeks that includes earnings and breaks-even up 7%, but offers a potential 3 to 1 payout if the stock is up 26% on February expiration. The options market is saying there is less than a 15% probability of the stock being $25 on Feb expiration, but the stock has moved on average about 17% on the day following its first three earnings reports since its April IPO.

Rationale: this trade idea risks 11% of the stock price over the next 5 months for a break-even up 12% with a max potential payout of 7.80 or 3.5x the premium at risk if the stock is at 30 or higher, which the options market right now suggests has less than a 15% probability of occurring.