Its that time of year for financial market pundits… reviewing the year that was and forecasting the year to come.  I don’t find S&P 500 (SPX) targets particularly useful unless I feel there has been appropriate thought given to how we have gotten to where we are today. Also with the end of the decade, there has been a lot of discussion in the financial press about the extraordinary gains in the stock market over the last ten years with reluctant credit given to unprecedented easy monetary policy including fed funds rate near zero for most of the past decade and the Fed balance sheet ballooning from under a $1 trillion to over $4 trillion.

But don’t take my word for it, as soon as the Fed began to “normalize interest rates” in 2018 (with three 25 basis point rate increases, coupled with the reduction of their balance sheet) the SPX dropped 20% in a little more than two months. What did it take to get the market to stop going down, three 25 basis point rate cuts and the Fed starting QE again. I discussed this on CNBC’s Fast Money this past Friday, specifically, this year’s late-year gains which include the breakout of a six-month range.

Today, our chart of the week isn’t just one chart. @RiskReversal has FOUR key market trends he’s watching that all inform one another. Take a look. pic.twitter.com/wJ43gvmeYh 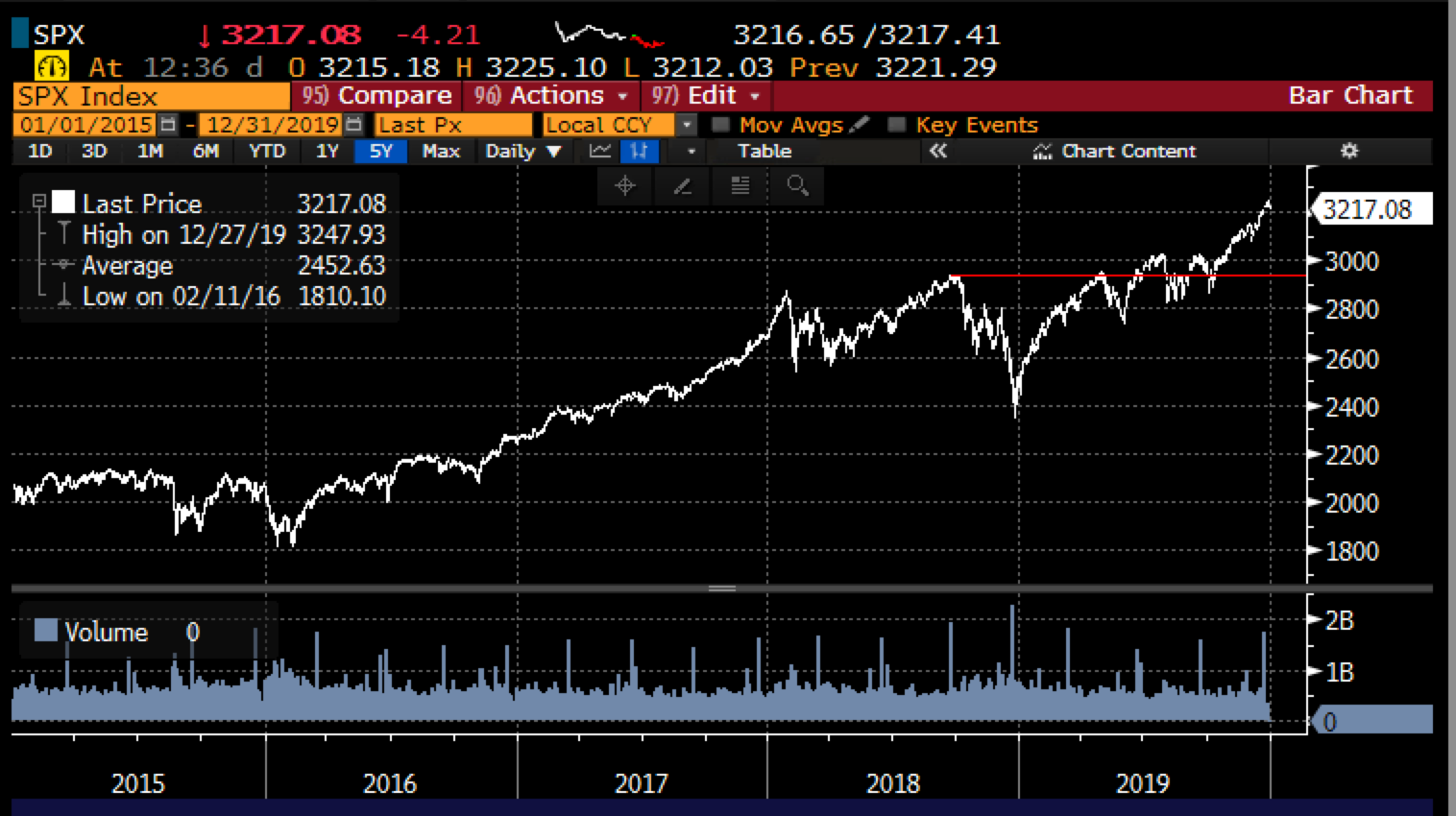 The breakout is nothing short of impressive from purely a technical standpoint, but it is worth highlighting that this breakout was likely impossible without the Fed not only returning to neutral but going full-on Dovish, and of course the smoke and mirrors of kicking the “trade war” down the road with trump’s phase one trade deal (whatever the hell that means).

First, on Fed, the nearly 7% rip since late Oct in the SPX neatly corresponds with the Fed’s expanded balance sheet of nearly $400 billion over the last four months: 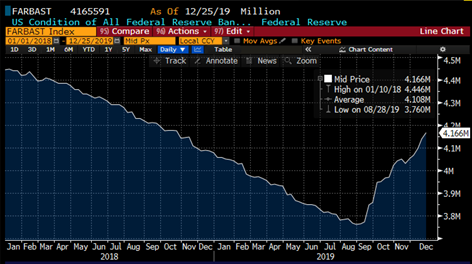 Overlaid with the SPX since the July 31st Fed Funds rate cut (the first of three, which were the first in ten years):

Back to the inputs on targets for the SPX. it is worth noting that In a year that saw no EPS growth for the SPX, the index’s has had one of its biggest gains since 2013, up 28%. I think it is safe to say that the index looks expensive with EPS coming in well below consensus estimates at the start of the year near $174, now looking like $163. The PE of the SPX nearing 20 with no eps growth discounts a lot of good news that has yet to come in 2020: 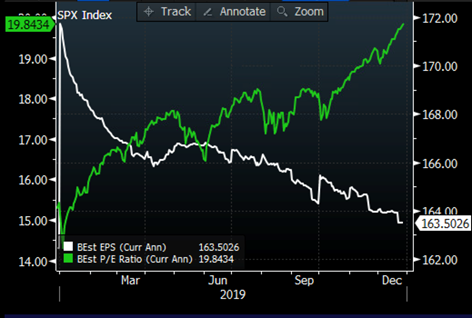 Back to the two main reasons for optimism (both economic and markets) is the supposed removal of two of the late 2018 impediments to growth, a hawkish Fed and the trade war. The Fed appears to be on the sideline for the time being, especially as we head into an election year, and any moves would likely be more accommodative to contract some form of an economic shock or as a result of the unholy coercion from the White House.

Second is the supposed “trade deal” which I suspect very soon will be seen for what it is, a mere rollback of the some of the tariffs that we put on China earlier this year and a de-escalation of tensions that were created out of whole cloth by this admin. There will be NO substantive trade deal before the 2020 election. On that topic, I had some thoughts a few of weeks ago on CNBC’s Fast Money on Dec 10h:

So as we head into 2020, I think it is worth noting that the easy money was made in 2020 in markets despite some serious heavy lifting on the economic front a return to some of the very bad habits that are leading to $1 trillion budget deficits in 2020 with GDP growth well below what this admin predicted would be the result of their 2017 tax cut.

It is my opinion that the higher we go in early 2020 the harder we will eventually fall. The best-case scenario for bullish strategists with 10% plus targets for the SPX in 2020 would be a pullback towards 3000 (the intersection of the uptrend from the Dec 2018 lows and the Oct 2019 breakout) and set the stage for a 10-15% rally towards 3500 mid-year. 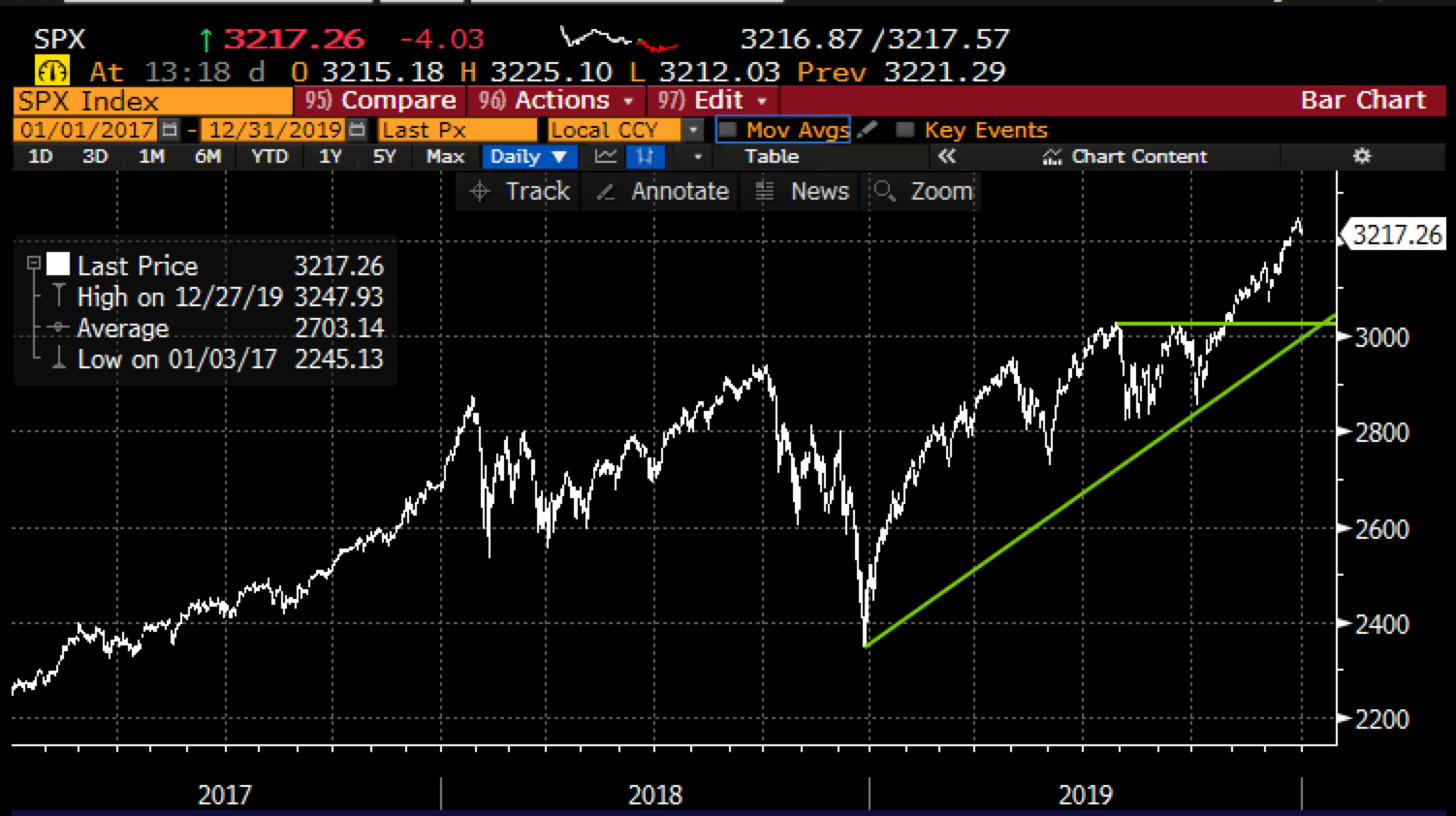 I would also add that after ten years of market gains and easy monetary policy there is the whole generation of investors who have no idea what protected bear market looks like and how the market will anticipate an economic recession months if not quarters before it is evident. With rates and the Fed’s balance sheet where they are, and the failed experiment of negative rates in other parts of the globe, what comes next to combat the next recession will not likely be the sort of “accommodative central bank environment” that is investible for those who lack a multi-year time horizon.

Happy New Year! Thanks for reading, I have some exciting new projects in the works for 2020 that I look forward to sharing with my readers.