Shares of Apple (AAPL) are up 95% from its 52-week lows made on Jan 3rd following the company’s first negative earnings pre-announcement in more than a decade: 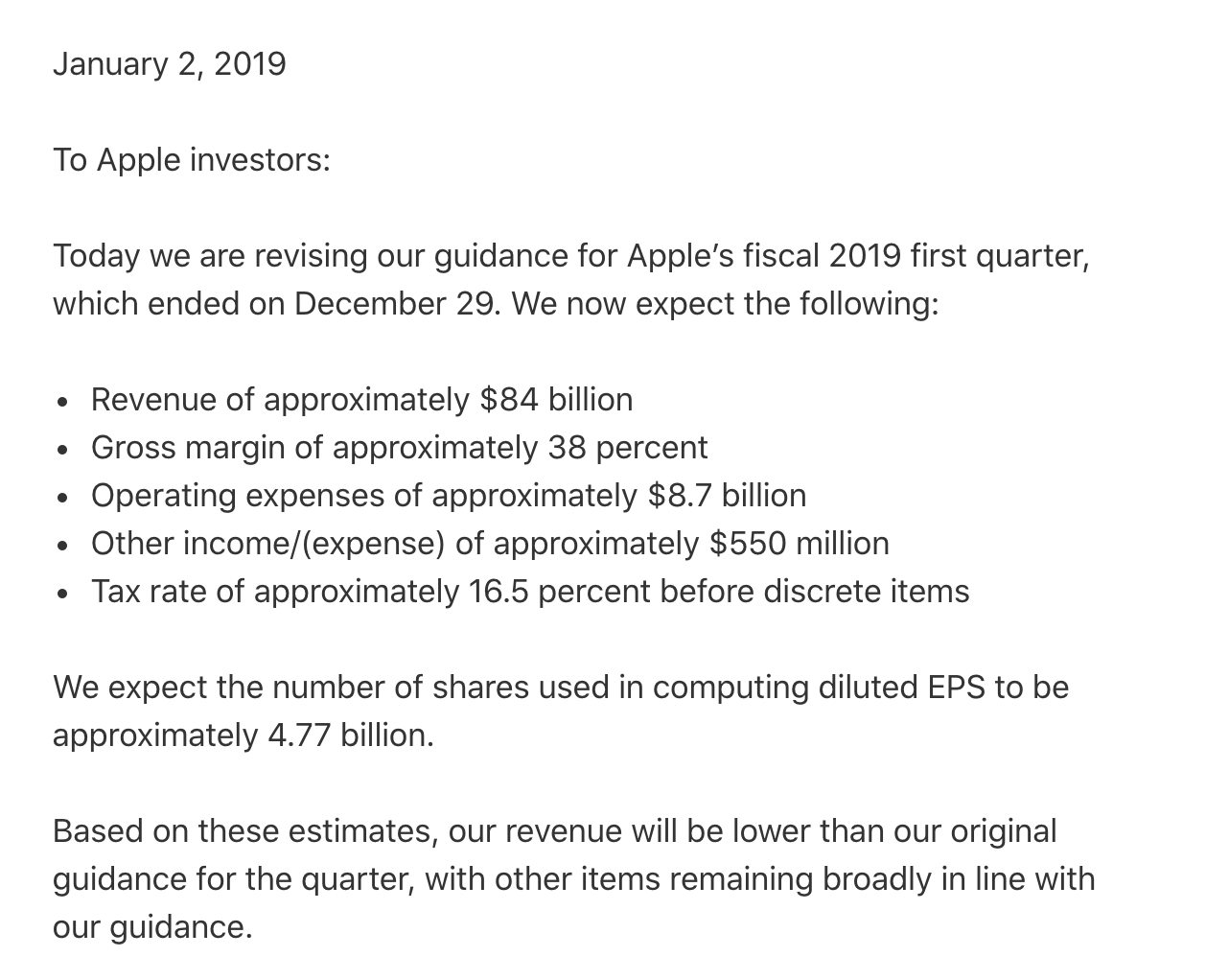 The stock’s nearly 75% YTD gains have it sporting a $1.2 trillion market, eclipsing the stock’s 2018 high made in early October, but ultimarely resulted in a 39% peak to trough 3-month decline: 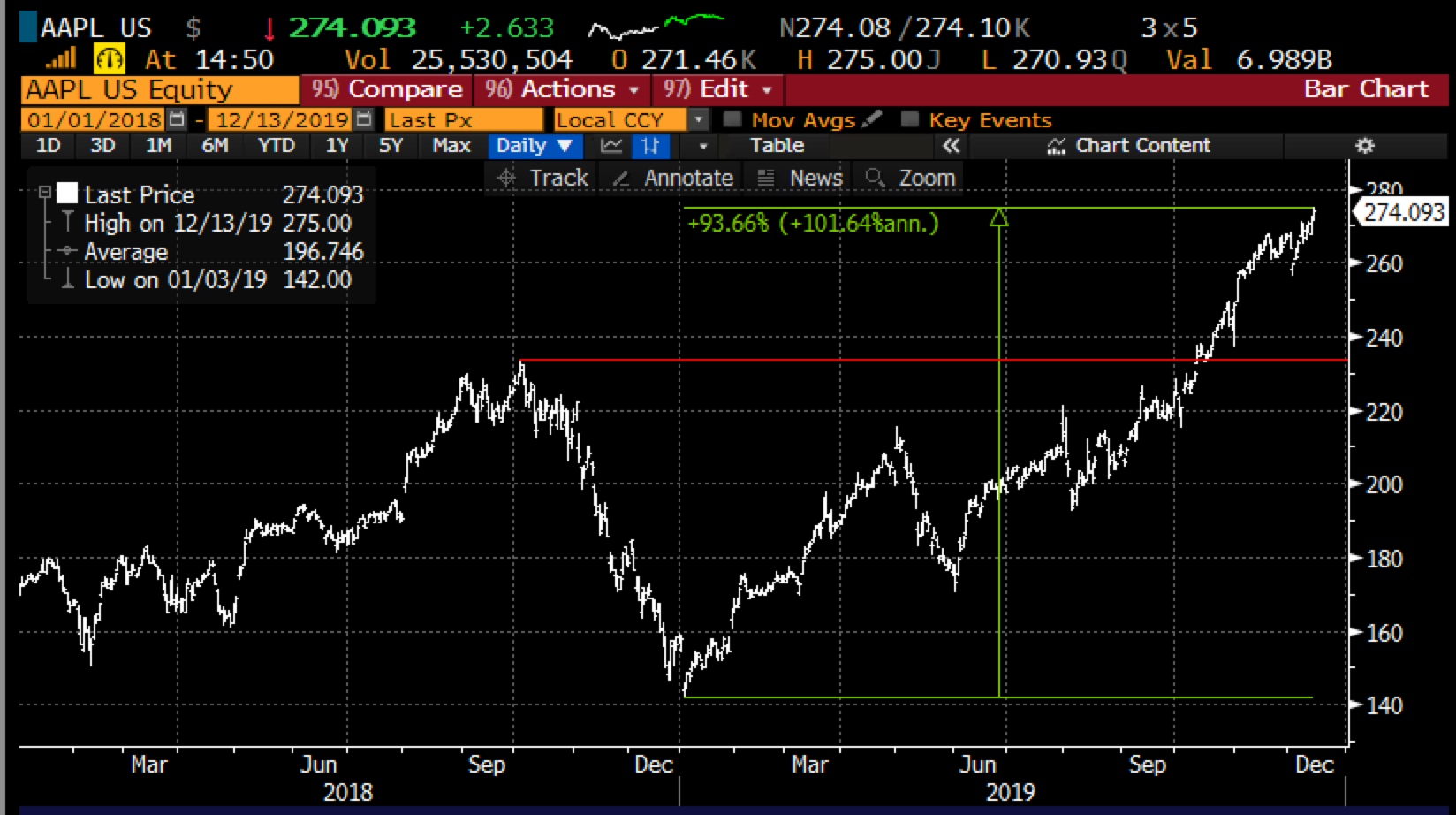 Despite news of today’s “trade deal” with China, shares of AAPL are up today as the push out of the threatened Dec 15th consumer tariffs is widely seen as a huge boon for AAPL, especially in front of the Holiday season. But it is worth noting that the situation that caused last year’s weakness in the calendar Q4 in China for AAPL had little to do with tariffs, and likely to do a lot with their evolutionary phones that launched that quarter, the high price of those phones and the Chinese increasingly buying cheaper phones by domestic phone makers where consumers are now more reliant on Apps like WeChat for messaging, e-commerce and payments.

Credit Suisse’s AAPL analyst Matthew Crabral who rates the stock a Neutral with a $221 price had some cautious commentary on iPhone units in China for the month of November (emphasis mine):

November China iPhone units (sell-in) drop; -7.4% y/y since iPhone 11 launch(Sept-Nov): iPhone shipments in China dropped 35.4% y/y in November (per MIIT “nonAndroid” data), significantly lagging the 0.2% y/y increase in the broader Chinese Smartphone market. We recognize monthly data can be volatile and the shift in launch timing vs. last year is likely skewing y/y compares; however, the drop in November marks the second straight double-digit decline (-10.3% y/y in Oct) and total shipments in China since the launch of the iPhone 11 family are now down 7.4% y/y (Sept-Nov). In addition to weaker overall units, the popularity of the lower-priced iPhone 11 (~70% of China new mix in C3Q19, per IDC) and its 15% y/y RMB price cut at launch likely adds further pressure to Apple’s Greater China sales; factoring in the decline in ASPs, we estimate China iPhone revenue fell by >17.5% y/y over the past three months (Sept-Nov).

Could AAPL be setting up for a redo of last Q4, tariffs or not? It might have more to do with nationalism or different usage habits by the Chinese… either way, AAPL is not gaining share in China… Reuters reported back in late October:

Huawei Technologies captured a record 42% of China’s smartphone market in the third quarter as local consumers rallied behind it after U.S. sanctions, leaving Apple (AAPL.O) to languish towards the bottom of the pile, market data showed.

Apple’s market share in China slipped to 5% from 7% in the year-ago quarter, according to a report that market research firm Canalys released on Wednesday, hours before the Cupertino, California-based company was to report quarterly results.

The July-September quarter marked the iPhone’s weakest sales in China in five years, said Nicole Peng, vice president of mobility at Canalys, with shipments likely down more than a quarter.

Assuming the company offered guidance on their last call they thought they could meet under fairly conservative circumstances and that the bottom did not fall out in China as it did in Q4 2018, and as Credit Suisse’s analyst is suggesting it has in terms of iPhone units in China, then the next identifiable catalyst will be their fiscal Q1 earnings that should come the last few days of January.

AAPL is trading nearly 21x expected fiscal 2020 eps growth of 10% on 6% expected sales growth, this is a massively high multiple for AAPL, at 10-year highs, especially for : 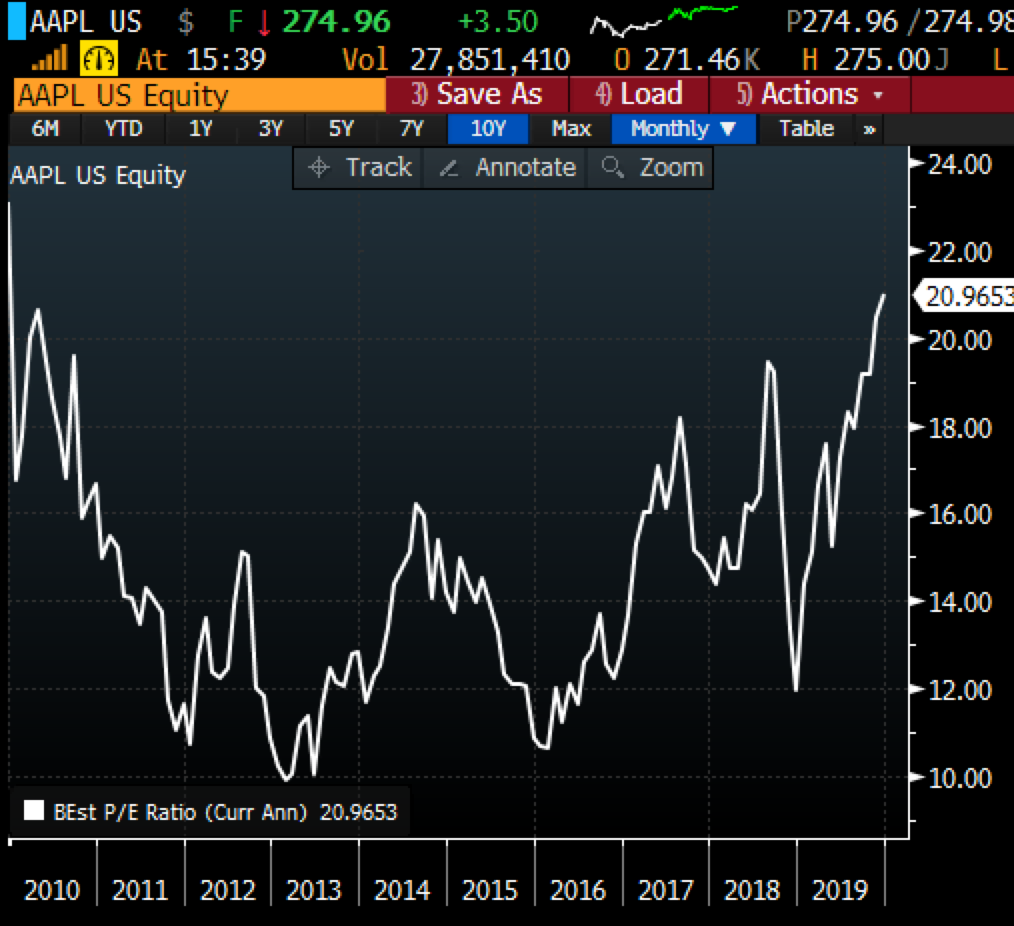 So what’s the trade?? This stock feels like it wants to close the year at the nice round number of $300, which would be another 9% from current levels, I obviously have no idea where it closes that’s just a guess, but it is worth noting that stocks with weekly options often have a pull to round numbers as that’s where a lot of open interest is.

But every notch higher the stock makes into year-end, long holders of the stock might start considering ways to protect gains, cause I can assure you that in the history of the U.S. stock market there has never been a stock to gain as much in market cap terms as AAPL did this year. Despite Wall Street analysts also being as mixed on the stock as they have in some time (28 Buy ratings, 14 Holds and 7 Sells) there seems to be a universal belief that this stock is being re-rated for their business lines like services and wearables and that it is up up and away. It is worth highlighting that over the last ten years, from all-time highs AAPL has had peak to trough declines of 45%, 33%, and 39%, and I suspect the stock will suffer a similar one when this run ends… 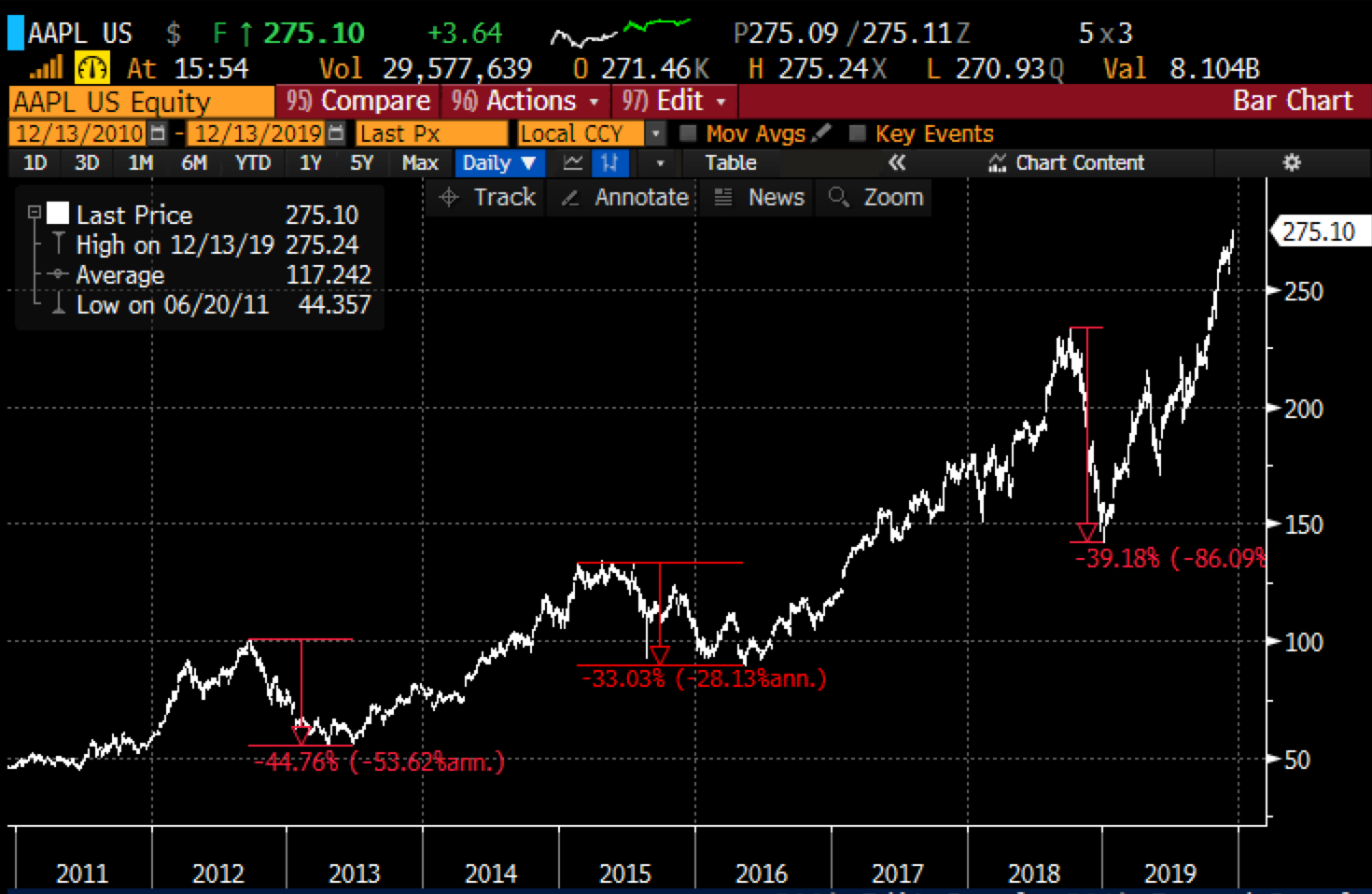 SO for longs who are getting vertigo, short-dated options prices are cheap, with 30-day at the money implied volatility nearing 2-year lows, making outright put protection look dollar cheap: 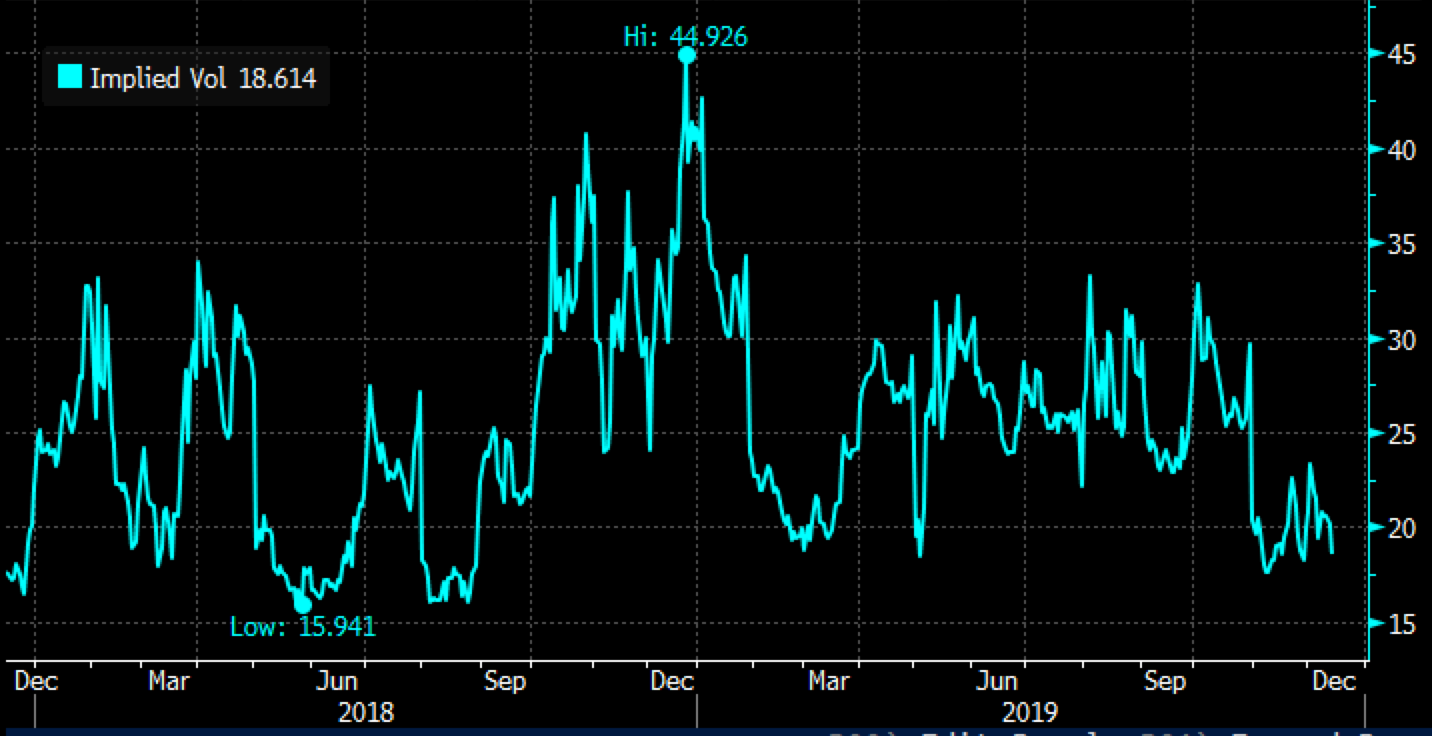 Ill continue to check back into year-end as collars in Feb might make the most sense as they will catch earnings, not just the unlikely potential of a negative pre-announcement.