Cisco Systems (CSCO) might be the most important stock in the market that NO ONE is paying any attention to. The stock is trading at levels it has not seen since January, now basically flat on the year, down 25% from its 52-week and 19-year highs made in mid-July, The next stop looks to be 2-year technical support at $40: 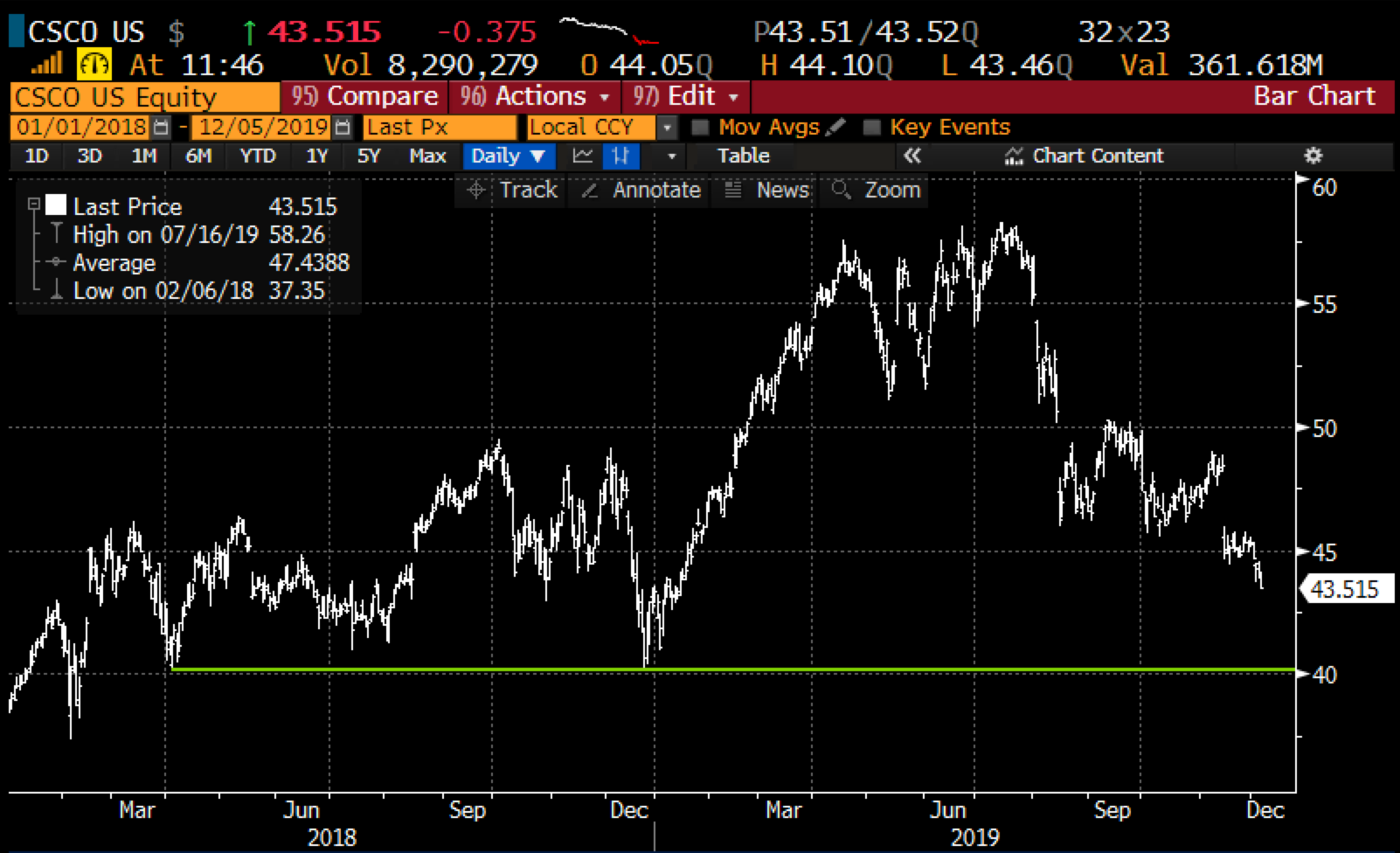 Why might CSCO’s price action be worth keeping an eye on, well it is one mega-cap U.S. multi-national Tech company that has issued two consecutive earnings gudiance disappointments largely blamed in the uncertainty of the trade war and weak global demand. Back on October 10th, Goldman Sach’s telco equipment analyst Rod Hall, on “concerns over spending trends in both enterprise and telecom”, per Bloomberg:

-expects enterprise spending “will continue to weaken,” while telecom spending activity “will remain depressed in the near term”
-Weakness in telecom “could persist well into 2020” as carriers pause ahead of 5G
-Goldman’s indicators for enterprise spending “continue to deteriorate,” and are expected to continue weakening ahead of next year’s elections
-Most of this weakness relates to a lack of business confidence at large enterprise driven by trade volatility,” rather than being driven by a macroeconomic slowdown

About a month later when the company reported their fiscal Q1 results on Nov 13th and investors were less than happy with the outlook and commentary, per Barron’s (emphasis mine):

For the second quarter, the company sees revenue declining 3% to 5% on a year-over-year basis, which implies a range of $11.8 billion to $12.1 billion, below the Street consensus at $12.8 billion. Cisco sees adjusted second-quarter profits of 75 to 77 cents a share, below the Street consensus at 79 cents. Cisco projects a second-quarter adjusted profit margin of 64.5% to 65.5%, down from 65.9% in the first quarter.

In an interview with Barron’s, Cisco Chief Financial Officer Kelly Kramer said that the order weakness the company saw in the previous quarter “got a little worse for us in Q1.” She said that there was continued softness both from service providers and in emerging markets, but that the issue has spread and become more broad-based.“We saw order pressure in all of our regions,” she added. While public sector demand was “strong,” she said that both enterprise and commercial orders got weaker.

”She said that China orders were down 31% year over year, as the trade tensions between the U.S. and China hurt demand, as some customers opted to choose domestic products over those from U.S. companies. Kramer says the company is also feeling the effects of Brexit and slowing business in Europe.

Frankly, I am surprised CSCO is getting as little attention as it is, a company with over $50 billion in sales, 40% outside the U.S. with headlines like this every day from a key growth region: China’s $17 Billion Default Wave Is About to Break a Record.

A stock like CSCO down so much with poor relative strength looks like a very hard press on the short side, but with options prices fairly cheap on an absolute basis, with 30-day at the money implied volatility at just 19%, down from 40% the last time the stock was trading at current levels, and well below the one year average of 26%, long premium directional trades look attractive for those looking to define one’s risk.

If you were inclined to play for a total meltdown you might just buy the Jan 42 put for 68 cents, risking 1.5% of the stock price for a little more than a month and a half with a break-even down 5%.

Again this is a tough press on the short side, I highlight the story for obvious fundamental reasons, and the options trade idea to show how even bad stocks in good markets can be traded with defined risk in the options market.