RH, the furniture retailer formally known as Restoration Hardware will report their fiscal Q3 results today after the close. The options market is implying about a 12% move in either direction tomorrow, or about $25, which is a tad shy of the 13% average one-day post-earnings move over the last four quarters.

Shares of RH are up a whopping 72% on the year, and up 145% from its 52-week lows made in late May. To suggest that the stock has been volatile over the last two years would be an understatement, making an epic double bottom near $80 in late May and then breaking out to a new all-time high in mid-September after a 100% gain, and has just kept going: 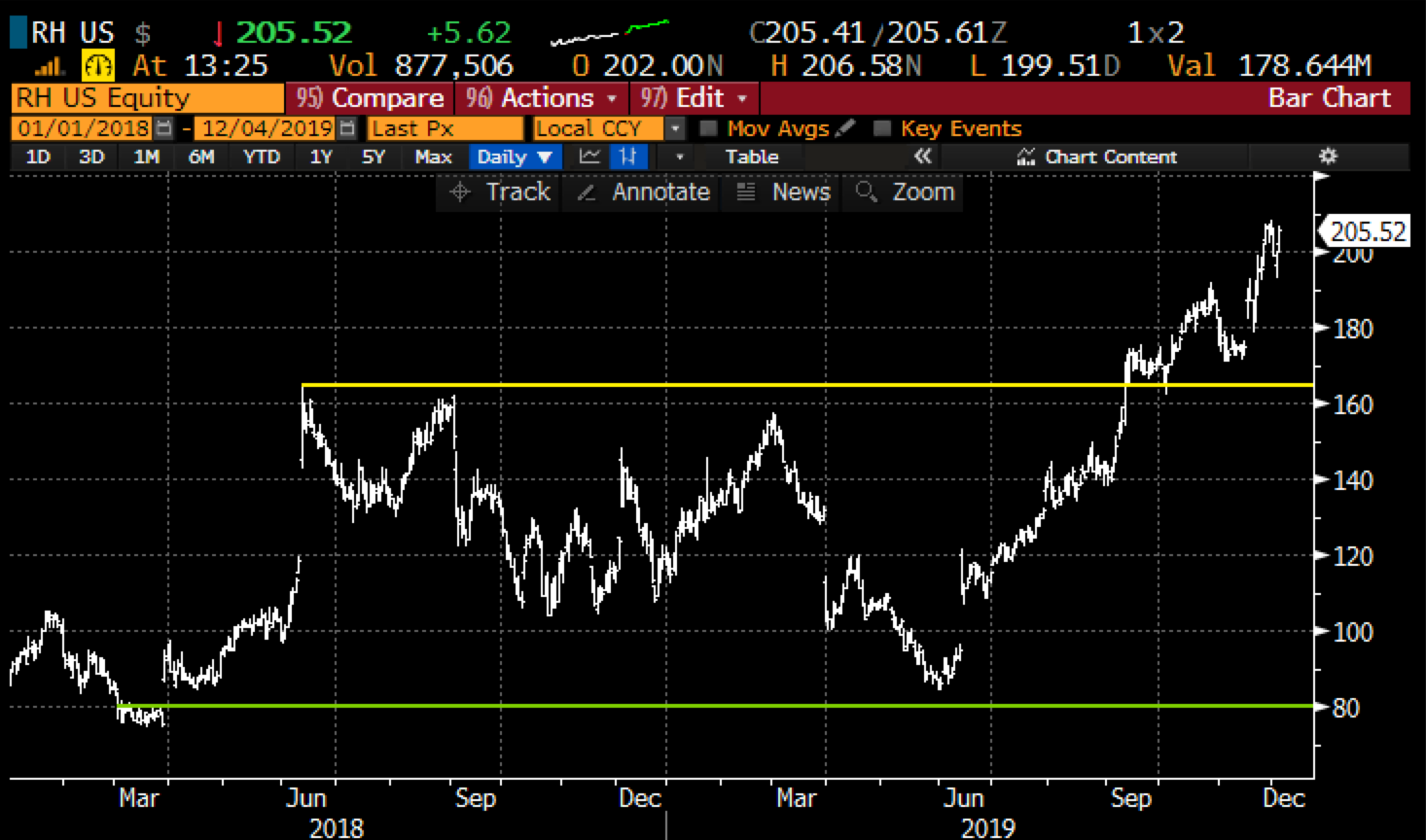 While that is nothing short of impressive, the stock is up more than 700% from the start of 2017: 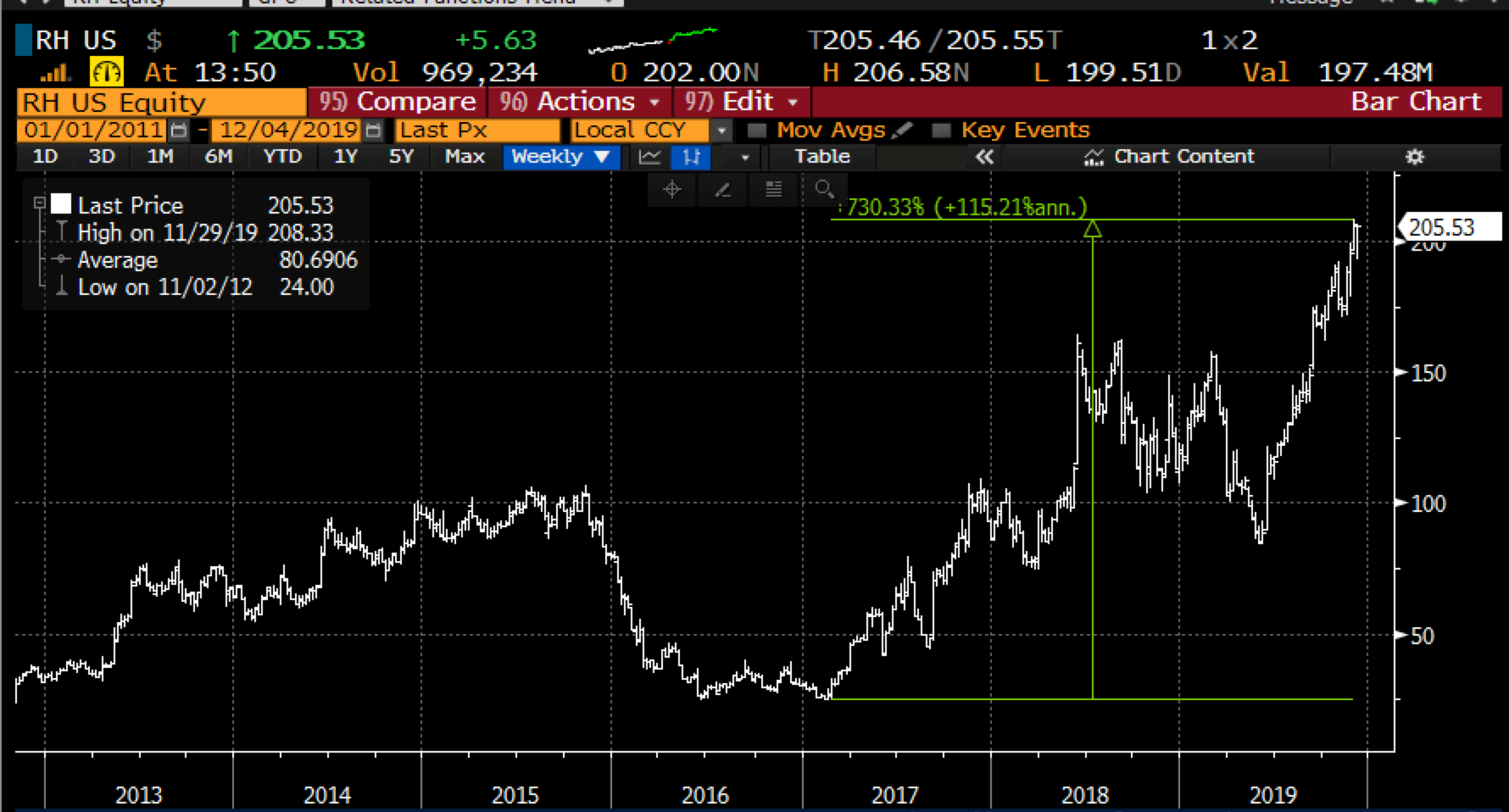 Despite the stock’s gains, it trades at a fairly reasonable earnings multiple at 16.5x expected next fiscal year’s 13% eps growth:

On reason for the below-market multiple might be the state of the company’s balance sheet with nearly $2 billion in debt, no meaningful cash on and a market cap of $3.8 billion that is again, up 145% from its May lows… when its debt on its balance sheet was greater than its market cap and cash and equivalents.

Wall Street analysts remain fairly mixed on the stock with 9 Buy ratings, 12 Holds and 1 Sell with an average 12-month price target near $187. Short interest sits at more than one-third of the stock’s float.

If the shorts ever get their thesis validated, the first stop on the downside will be $180 to fill in the November gap, at the uptrend from the May lows, and then down to the Sept breakout around $160 very quickly: 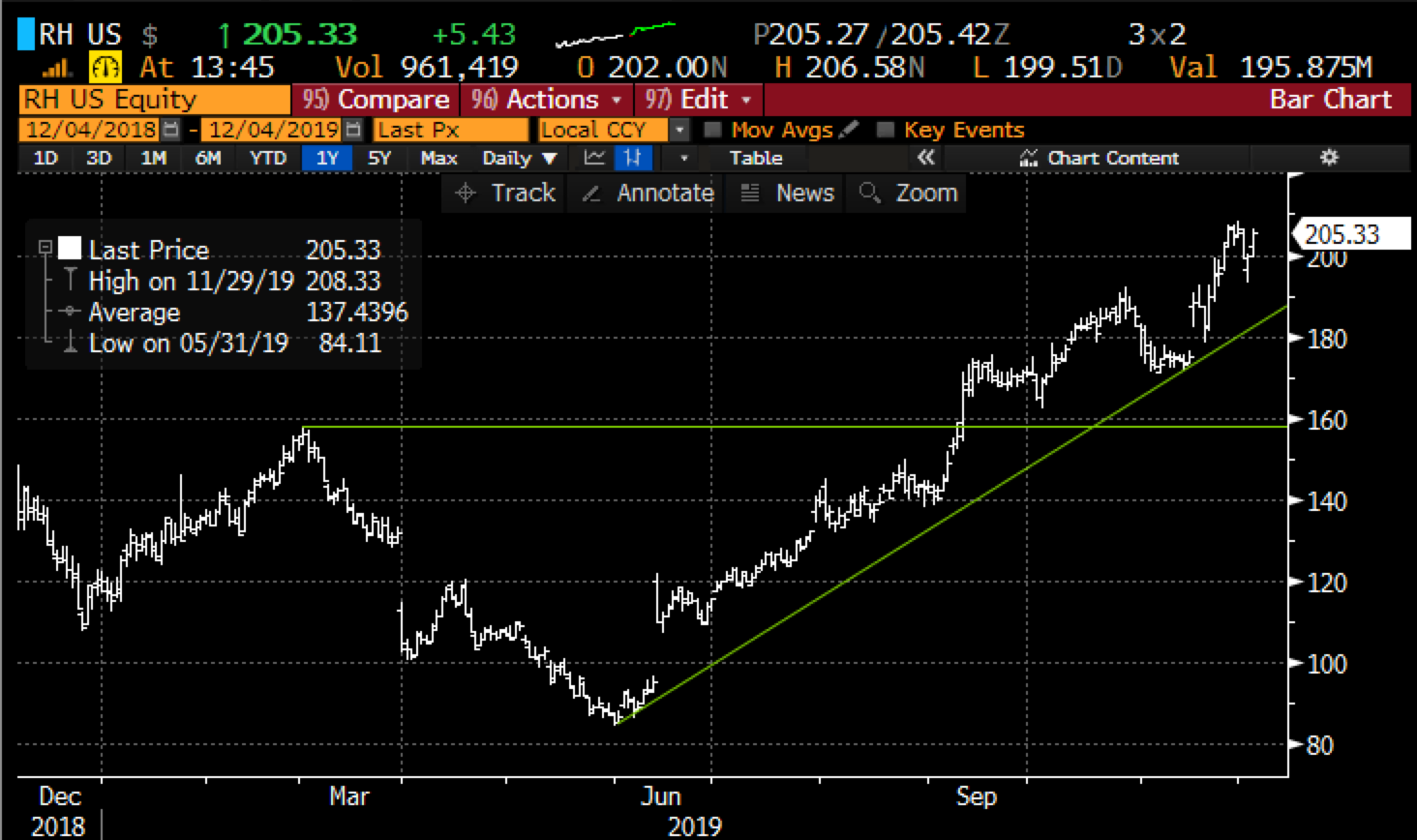 So what’s the trade? I would not buy this stock with your money, while bulls feel that something has inflected in the last five months, the slightest weakness in forward guidance and this stock is back at $180.

If I were inclined to play for a move in line with the implied move then I might consider the following put spreading Dec expiration:

I’ll offer my normal disclaimer about long premium directional trade ideas into events like earnings, especially in high vol names like RH, you need to get a lot of things right to merely break-even, first and foremost direction, then magnitude of the moving and timing. Trades like the one detailed above should be for those with a high conviction of a directional move.

Another bearish trade idea that would reduce the premium at risk, target downside technical levels and take advantage of high implied volatility would be a put calendar... for instance:

The ideal scenario is that RH stock is near 180 on Dec expiration and the short 180 put expires worthless or can be covered for a small amount and you are left long Feb 180 put for $4.50 or about 2.2% of the stock price.

The max risk of the trade is $4.5 on a sharp move higher than current levels or a sharp move below the $180 strike price.

Rationale: as stated above this trade takes advantage of the high price of short-dated options to help finance the purchase of longer-dated puts, one would do this sort of strategy if they did not think there is a strong likelihood that the stock is down much more than the implied earnings move in the next two weeks but thinks that a decline would likely extend into the new year.