On Friday’s Options Action program on CNBC, I detailed a bearish trade idea in Target (TGT) in front of tomorrow morning’s Q3 print, watch below:

Here is the trade idea from my post yesterday:

Rationale: this trade idea breaks-even down 5% within the implied one-day earnings move, but offers a month for it to do so. The trade idea risks 2.2% of the stock price vs a potential gain of 6.7%, or $7.5 if the stock is down 13% from current levels by Dec expiration. The options market is suggesting there is about a 33% chance this trade is break-even on Dec expiration.

It is worth taking another quick look at the retail group today as there is some nasty price action in a handful of names on the heels of some bad results/guidance and a data breach at Macy’s. First, the big kahuna, The Home Depot (HD) is down 5% on its earnings. Kohls (KSS) is down nearly 20% on its results (or lack thereof) and Macy’s (M) is down 10% on the revelation to customers that their payment information might have been hacked just two days before their earnings.

At this point, I am not sure a good print from Target (TGT) really means that much for the retail space this week and the group might set up as an attractive short into year-end, especially if the proposed consumer tariffs go into effect on Dec 15th as threatened by the trump admin.

In mid-August, just weeks after the announcement of consumer tariffs that were initially expected to go into effect in September, then pushed to mid-December, the XRT, the S&P Retail etf made new 52-week lows. It has since had a very healthy 20% bounce from its lows, before finding some technical resistance just below $46, the breakdown level from a year ago: 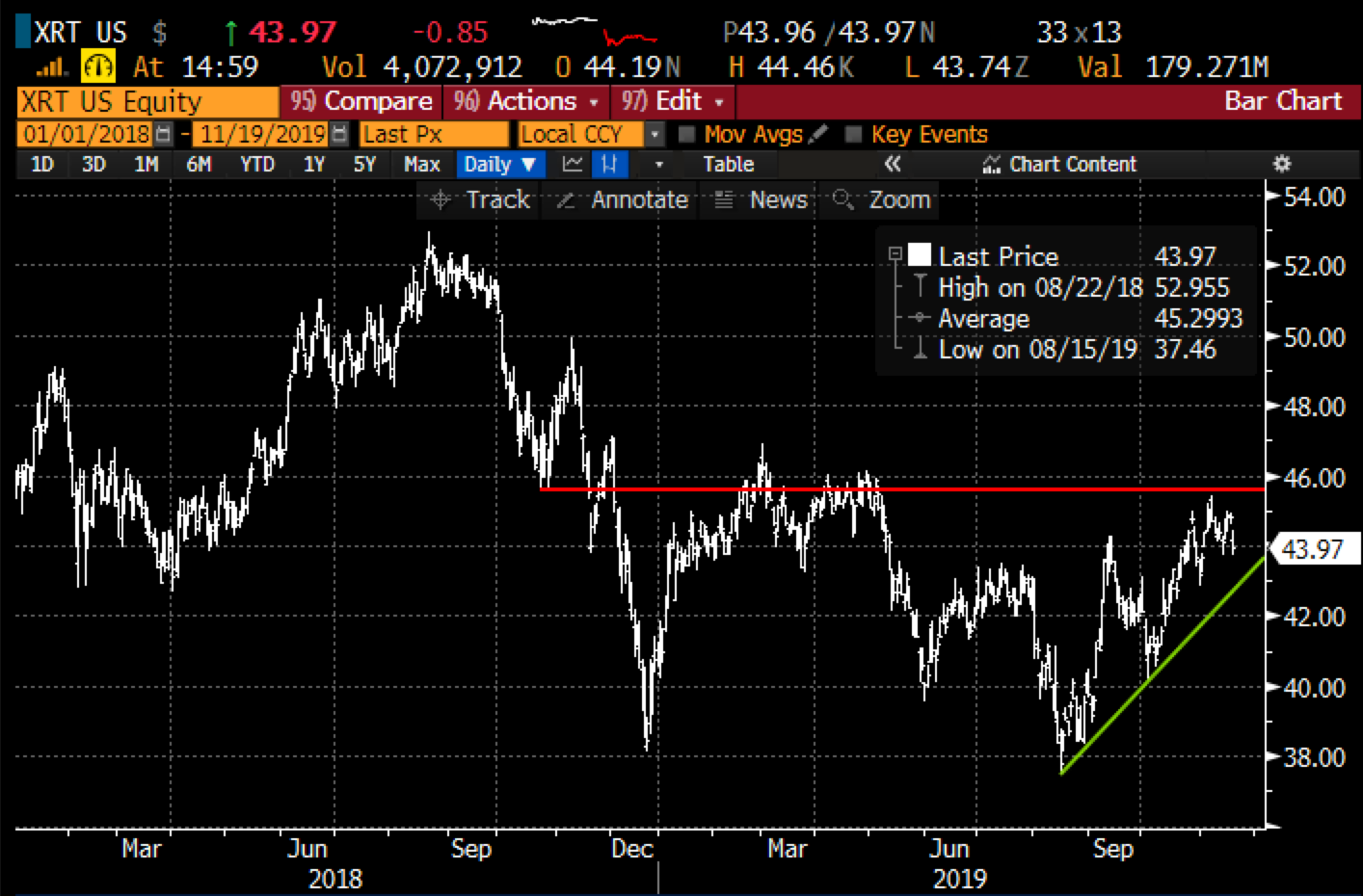 For those looking to make defined risk directional plays in XRT, short-dated options prices look fairly cheap with 30-day at the money implied volatility at just 20%.

So what’s the trade? If I were inclined to play for continued weak earnings in the retail space, and If I were to take trump’s former National Economic Advisor, and former President of Goldman Sachs, Gary Cohn suggestion last night on Fast Money that trump is likely to go through with the Dec 15 tariffs, then I would look to play the XRT for a re-test of the the recent lows below $40 and do so with defined risk via Dec puts or put spreads, for instance…

Rationale: this trade idea risks 2.6% of the etf price and allows for the opportunity to spread by selling a lower strike put on the first move lower, turning into a vertical put spread.