Back on Sept 6th, (One More Thing) I made a near-term bullish case for shares of AAPL when the stock was trading  $213.50 suggesting the technical set up looked positive, and the narrative around trade in the near-term might provide the catalyst for a breakout and a run to last year’s all-time highs near $233:

On July 31st shares of AAPL gapped to a new 10-month high following their FQ3 results,, but the stock found sellers at $220 and the stock quickly retreated below $215. The following day on August 1st trump tweeted a threat of new tariffs on consumer goods made in China, which would affect many of AAPL’s products and the stock dropped another 10%. It has since recovered on the pushout of some of the tariffs and optimism that talks between the U.S. and China later this month or early next month could yield a positive outcome for AAPL, which would be one of the most adversely affected U.S. multinationals by any escalation in the trade front. AAPL could face the double whammy of U.S. consumers putting off upgrades of phones if the company tries to pass on the increase (or face lower margins by them absorbing them or a mixture of both) AND the longer the trade war goes on the greater the potential for Chinese consumers to choose local smartphone brands like Huawei which happen to be a lot cheaper than Apple’s iPhone.

Back on October 8th when AAPL stock was threatening a breakout to new all-time highs I had the following to say (One Hedge Thing):

With the stock now at $226 just 3% from last year’s all-time high and the Oct 215 calls worth $12.50, or nearly double what they would have cost a month ago when then stock was $213.50 I think it makes sense to take profits, or if still bullish look to roll up and out a bit.

But, given the tone of trade talks and my long-held belief that AAPL will be one of the last battles fought in this trade war, I suspect this might weigh on sentiment on the stock just below the prior highs…nearly perfectly book-ending the last 12-months.

SO here we are, the moment of truth, in early Sept I had the call right, in early Oct I was a little early to pull the plug, but today after the close, the company’s guide for the current quarter will dictate the direction of the stock’s next ten percent move. Last night on CNBC’s Fast Money I gave a quick rundown of the implied move in the options market into the print:

As I said in the video, I would not be a buyer into the print. This is the very quarter that AAPL missed badly last year, specifically with iPhone units in China, and despite what seems abundantly clear about Apple’s smartphone market share in China, the stock has soared to new all-time highs, up 54% on the year, and up 70% from the Q1 negative pre-announcement on Jan 2nd. On that market share, local Chinese brands are winning, big-time, per Reuters:

SHENZHEN, China (Reuters) – Huawei Technologies captured a record 42% of China’s smartphone market in the third quarter as local consumers rallied behind it after U.S. sanctions, leaving Apple (AAPL.O) to languish towards the bottom of the pile, market data showed.

Apple’s market share in China slipped to 5% from 7% in the year-ago quarter, according to a report that market research firm Canalys released on Wednesday, hours before the Cupertino, California-based company was to report quarterly results.

The July-September quarter marked the iPhone’s weakest sales in China in five years, said Nicole Peng, vice president of mobility at Canalys, with shipments likely down more than a quarter.

As I said last night on the show, investors are explaining away near-decade high multiples for the stock on a blended rate for software and hardware, but it is worth noting this becomes increasingly hard to justify if AAPL is not growing market share in China, with iPhone units expected to decline for the third year in a row, and with gross-margins declining despite higher-margin services making up a greater percentage of AAPL’s total sales every year. 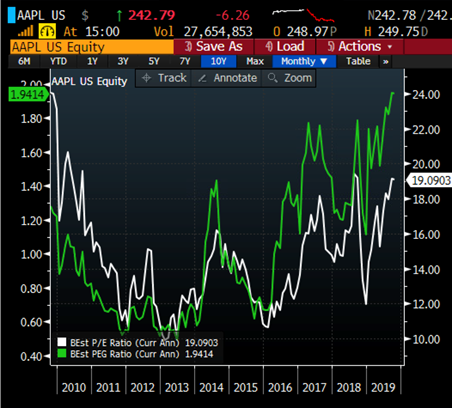 Looking at the stock’s run that has caused it’s multiple to move higher despite rising earnings estimates, it is clear that there is expectations that the company will beat and raise. Obviously there is no overhead resistance, but for a stock with a $1.1 trillion market cap I think it is safe to say it would take a considerable beat to draw in new longs. On the downside, the obvious support is the $230-$200 range which in the low end happens to meet the uptrend that has been in place since the Jan lows: 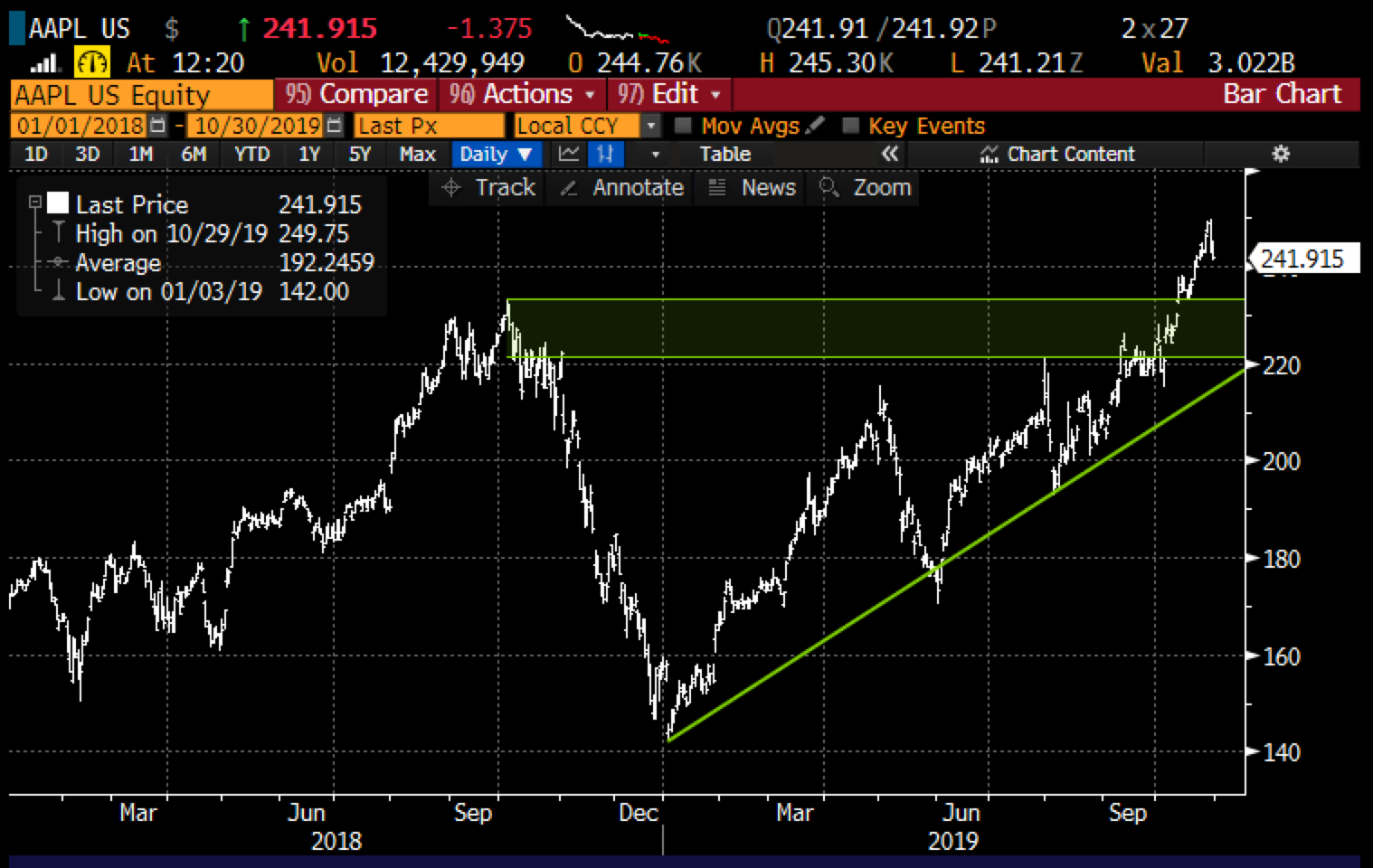 So what’s the trade? The implied move in the options market is about $11, which to the upside brings you very near the high from yesterday near $250. On the downside, it brings you right back to the prior high,.. If you are long stock and want to protect into yearend because you don’t want to sell up 54% then consider collars, selling an out of the money call and buying an out of the money put in the same expiration, allowing for gains to the short put strike and losses down to the long put strike, but stock protected below.  For instance…

Gains of the stock to 252.50 (in line with the implied move), but stock called away at that level

Losses of up to 12 between current levels and 230, but protected below.

Rationale: an investor would only hedge their long stock position like this if they were more worried about extreme downside than extreme upside. If the stock is at or above the short call strike of 252.50 on Nov expiration the investor could always cover the short call to keep the long position intact rather than having the stock called away.

This hedge costs 35 cents, but aside from the $12.35 risk to the downside from current levels, the other risk is capping against above $252.50 between now and Nov 15th close.

If I were outright bearish and thought the company will guide lower for the holiday quarter, and the stock will retrace back towards $220 in the coming days I might consider the following put spread:

Rationale: this trade idea risks 2% of the stock price to possibly make 6% if the stock is down 9% in the next 12 trading days.

If I were inclined to play from the long side I might merely play for the one day bounce and buy near the money weekly calls or call spreads, as I suspect the bounce might be short-lived and look to close on the pop tomorrow, For instance with the stock at $242.50 the Nov 1st 245 calls are offered at $4.40 or the Nov 1st weekly 245 – 255 call spread is offered at $3 which would have a max profit of 7 at $255 or higher on Friday’s close. 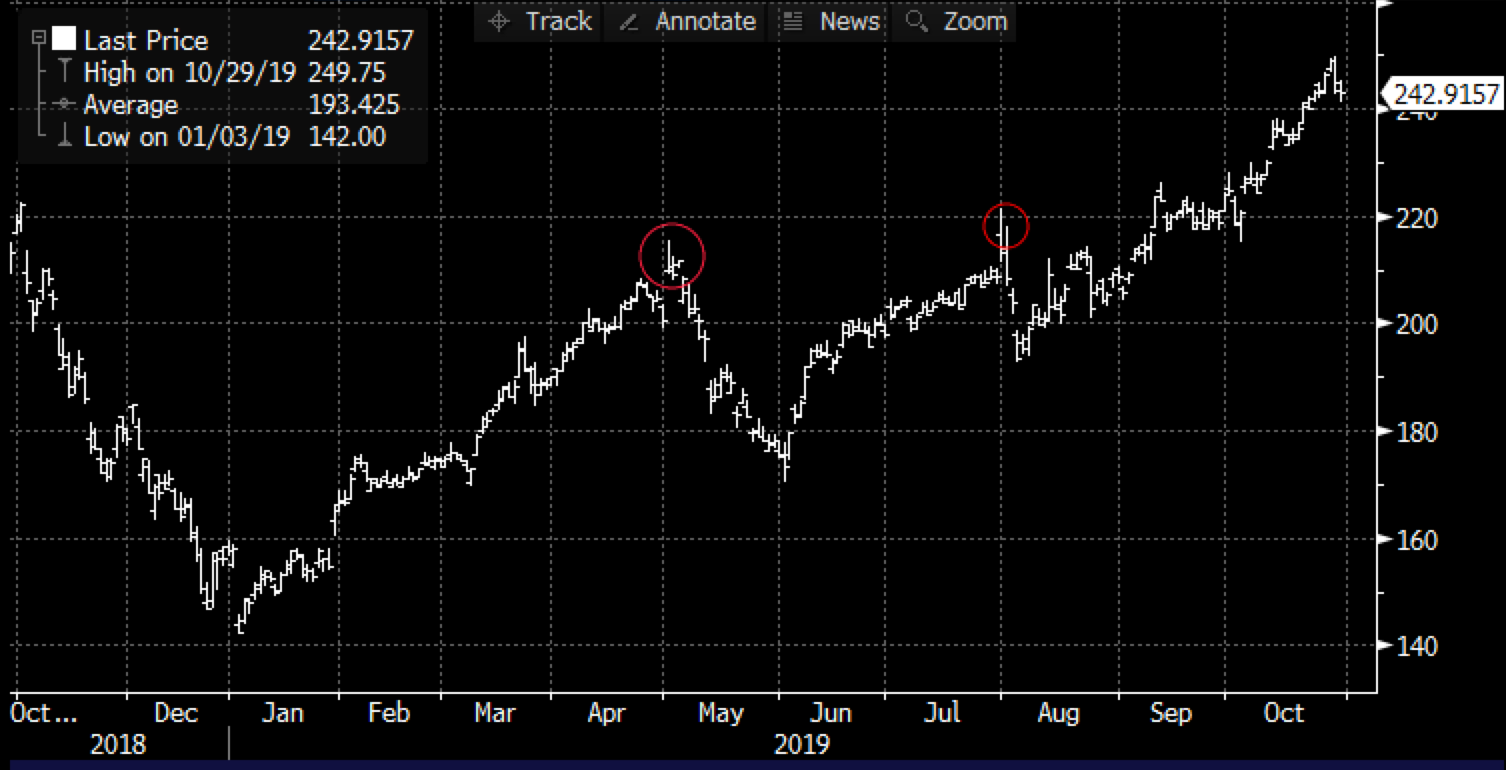