Amazon (AMZN) will report its Q3 results tonight after the close. The options market is implying about a 4% one day move tomorrow, which is essentially inline with the average one day move of the stock post-earnings over the last four quarters.

Shares of AMZN underperform its mega-cap MAGA tech peers this year, up 18%, vs Microsoft’s (MSFT) 37% ytf gains and Apple’s (AAPL) 54% gains. The stock has lost a good bit of momentum since retaking $2000 briefly this summer, a level it had not traded above since last fall, and has since broken down below the uptrend that had been in place from its December 2018 lows, and below its 200-day moving average. 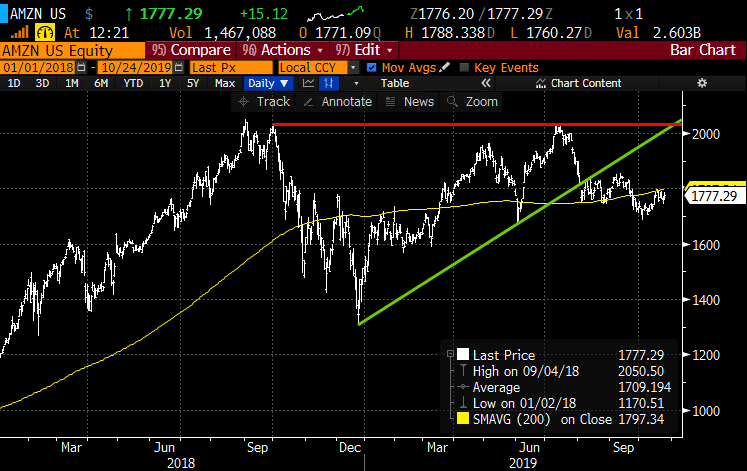 RBC Capital’s star internet analyst Mark Mahaney, who rates shares of AMZN a Buy with a $2600 12-month price target, highlighted the following key items to watch in their Q3 report in a note to clients last week:

1) Gross Margins: We estimate Q3 gross margin of 42.2%, up 50bps Y/Y, and weighed down by increased Shipping costs associated with One Day.

2) Operating Margin: We are modeling a 4.3% GAAP Op. margin in Q3, down 230 bps Y/Y, due to higher fulfillment and shipping costs from scaling the One-Day initiative.

Much like last quarter, the one-day shipping initiative is expected to be a drag on results, which I suspect will only be amplified in their Q4 guidance. Despite the stock’s under-performance of late, Sell-Side analysts remain steadfast in their Buy ratings, with 54 vs 2 Hold ratings and NO Sells. What’s interesting to me about the costs associated with ramping one-day shipping is that it is very different than how the company has invested in other initiatives like AWS over the last decade, the company is a first-mover in public cloud saw a massive runway for the secular shift to the cloud, they spent at the behest of the company’s already narrow retail margins, but the return came in a very big way in the form of an offering that had much higher margins than their core. But with one-day shipping, the bet is that more people will sign up for Prime and that Prime users spend up to 10% more a year with AMZN than non-Prime users. Over the long term this should work, in the near term while revenue and unit growth has accelerated, so have costs at the expense of profits, and this will be an interesting experiment if the company does not see a sustained and broader uptick than they did with prior Prime offerings at a time where AWS margins have stopped rising and competition is likely to only lead to commoditization.

The implied move in the options market very near what the stock has moved on average over the last four quarters suggests that expectations are not exactly high heading into the print. Might investors have been lulled into a sort of bearish sentiment for no great reason heading into their seasonally strong Q4? On the flip side, a miss and guide lower and this stock becomes a show-me story in the near-term.

If I were inclined to play for a beat and raise, and given the stock’s lackluster performance of late, and low implied move, I might consider buying short-dated calls or calls spreads playing for a one day pop, risking what I am willing to lose:

Rationale: this trade idea is very binary, get the direction wrong and it is a total loss. But get the direction right, and the break-even on the trade is up 2.7%. well within the implied move that we already think looks cheap. This trade idea risks 1.4% of the stock price for what the options market suggests is about a 30% chance of the trade being break-even on tomorrow’s close.

If I were inclined to play for a miss and a guide down I might look to give the trade some more time as I suspect it might re-test the 1600 support level in the coming weeks prior to the Black Friday/ Cyber Monday free-for-all taking place.