I have a sort of like-hate relationship with Twitter as a product and with the company. While I find the product an efficient way to organize and consume news, I find it to be one of the least joyful daily activities that I engage in. The trolling and harassment on the platform only seem to get worse, and the company’s inability to deal with the biggest troll on the planet, donald trump makes me think twice about all of the altruistic mumbo jumbo routinely heard out of founder ceo @jack ‘s mouth about Twitter’s Mission. That, of course, reflects my bias about one man (and his cult followers) on the platform who I think has single handily ruined my Twitter experience, with his divisiveness, routine lies and outright threats to people, organizations and nation-states.

I like @Jack and think he has built a very unique platform for the mobile age, especially when you consider their next largest competitor is literally 10x their size in terms of daily active users (DAUs), but I just can’t understand how he can let his platform be co-opted by a man who does not share his or his company’s values, who routinely breaks their terms of service and has made the platform widely unattractive to hundreds of millions of people with smartphones who chose not to use it because of the reputation for being the outhouse of the social web.

As far as those users are concerned in Q2, TWTR grew DAUs by a measly 6 million to 139 million, which compares to Facebook’s reported Q2 1.58 Billion DAUs. Bulls pointed to strong domestic ad revenue growth… which accelerated 3 points quarter over quarter, but as we know from FB a few years back that without significant user growth, which TWTR does not have, ad loads will hit a wall eventually. The saving grace for FB was their 2012 acquisition of Instagram and their 2014 acquisition of WhatsApp two platforms which were groqrting users tens if not hundreds of millions a year to over 1 billion users that they can leverage the data from one another to better target ads. Twitter does not have other product levers and for the time being, it will be dependant on how many ads they can jam in your feed.

TWTR will report Q3 earnings on Oct 24th before the opening, and while I am not going to preview that at the moment, the chart caught my eye today, breaking down below the uptrend that had been in place since its 52-week lows made in December. On two instances this year (March and late June) the stock tested that uptrend bounded and made new 52-week highs. Despite its recent 15% decline in the last month, the stock is still up nearly 35% on the year. 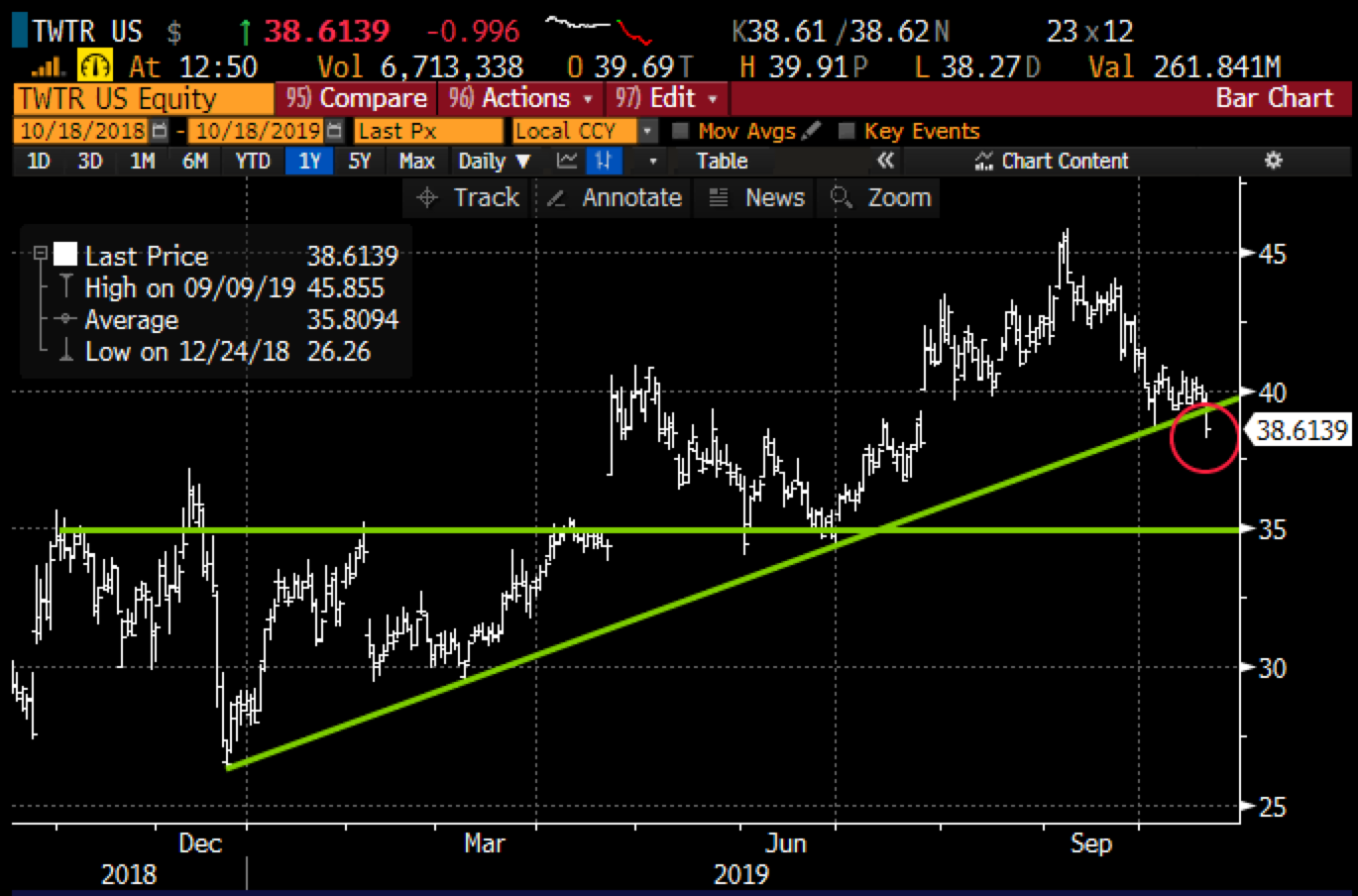 To my eye, $35 looks like the next stop on the downside, which at the point my be just a tad oversold. The options market is implying about a $3.90 move between now and next Friday’s close, two trading days after their results or about 10%, which is a tad shy of the 12.5% average one-day post-earnings move over the last four quarters.

Just to highlight how difficult it is to play with options for a 10% move lower between now and next Friday, with the stock at $38.75 the Oct 25th 39 – 34 put spread is offered at $1.70, or 4.4% of the stock price with a break-even down at $37.30, or 3.75% with a max gain of only $3.30 if the stock is down 12.25% at $34 or lower on next Friday’s close. So risk one to maybe make up to two if the stock is down in line with the average over the last four quarters. This also gives me the opportunity to highlight just how difficult it is to make money long short-dated options into events like earnings, you need to get a lot of things right, first and foremost direction, then the magnitude of the move and of course timing.

I’ll check back next week prior to the results.