Shares of Workday (WDAY), the cloud-based enterprise solutions company got drilled yesterday, closing down 13% following guidance at their analyst day the caused analysts and investors to rethink what they are willing to pay for growth, per WSJ:

“While management remains bullish around the company’s long-term growth opportunities, we note the majority of Workday’s future growth will likely be driven by its core HR offering as the adoption of cloud-based financials solutions within the large enterprise segment of the market has yet to truly inflect,” analysts at Stifel wrote in a research note. “We believe this inflection point will eventually occur, but with the timing around such an event still relatively uncertain, along with Workday’s premium valuation, we remain on the sidelines.”

Back on Sept 9th in a post titled SaaS Cracks, I highlighted what I thought was weak technicals for public SaaS stocks. While some of the recent IPOs have been challenged of late, it was worth noting that the three big kahunas, Salesforce (CRM), ServiceNow (NOW) and Workday (WDAY) had a little The Good, The Bad & The Ugly playing out. CRM is down just a few percent in the last month, with a generally constructive chart and recent guidance, but in a slight downtrend. NOW is in the exact same spot it was in back in early Sept, but to my eye looking verty much like a head and shoulders top with the neckline near $250. And WDAY is just downright ugly, now down 30% from its all-time high made in July and down 1% on the year.

So what now? After the market close Australia based Atlassian (TEAM), a collaboration cloud-based enterprise software company that sports a $30 billion market cap, is up 38% on the year, trades 19x expected FY2020 sales growth of 28% and loses money on a GAAP basis will report earnings. TEAM is down about 18% from its July high, below the uptrend that has been in place since mid-November and is once again threatening support near its mid-May breakout to new highs, which is held all summer: 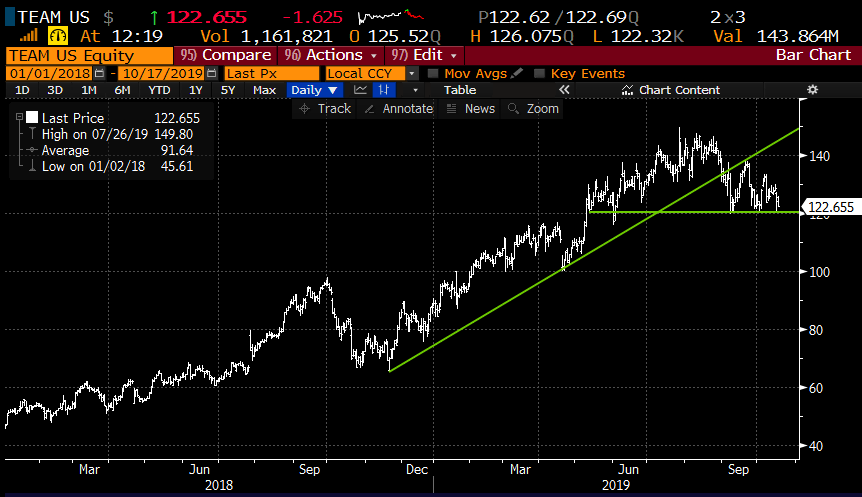 The options market is implying about a $10 one day move tomorrow, or about 8% in either direction which is essentially in-line with the one-day average post-earnings move since the company went public in early 2016. This is not a company I know much about, and frankly, it is quite shocking that a stock of a company with a $30 billion market cap, trading 120x expected adjusted earnings and 19x sales can fly under the radar from most market pundits, but the stock’s reaction to results might be fairly telling, I guess I see few scenarios where it can go meaningfully higher aside from a massive beat and raise or a takeout, both of which I suspect are unlikely tonight.

So I don’t have a trade on this, but I do think it is important to track investor response as it is appearing to me that investors in tech remain crowded in MAGA (MSFT, AAPL, GOOGL & AMZN) and semis. The loss of momentum is this once loved group could suggest that breadth in tech is weakening and the likelihood for a breakout in the Nasdaq becomes more challenged with the loss of LTs.