Netflix (NFLX) will report its Q3 results tonight after the close. The options market is implying about a $29 move or about 10% in either direction tomorrow, which is rich to the average one day move over the last four quarters of about 5.25% with last quarter’s 10.25% decline in late July the largest post-earnings move in more than two years. Last quarter’s gap was technically significant because it blew through support that has been in place since late January (also its 200-day moving average)  and cascaded into a 30% peak to trough plunge before its recent 10% bounce. The stock is really in no man’s land with last month’s low near $250 the next real support level followed by the Dec 2018 low near $230: 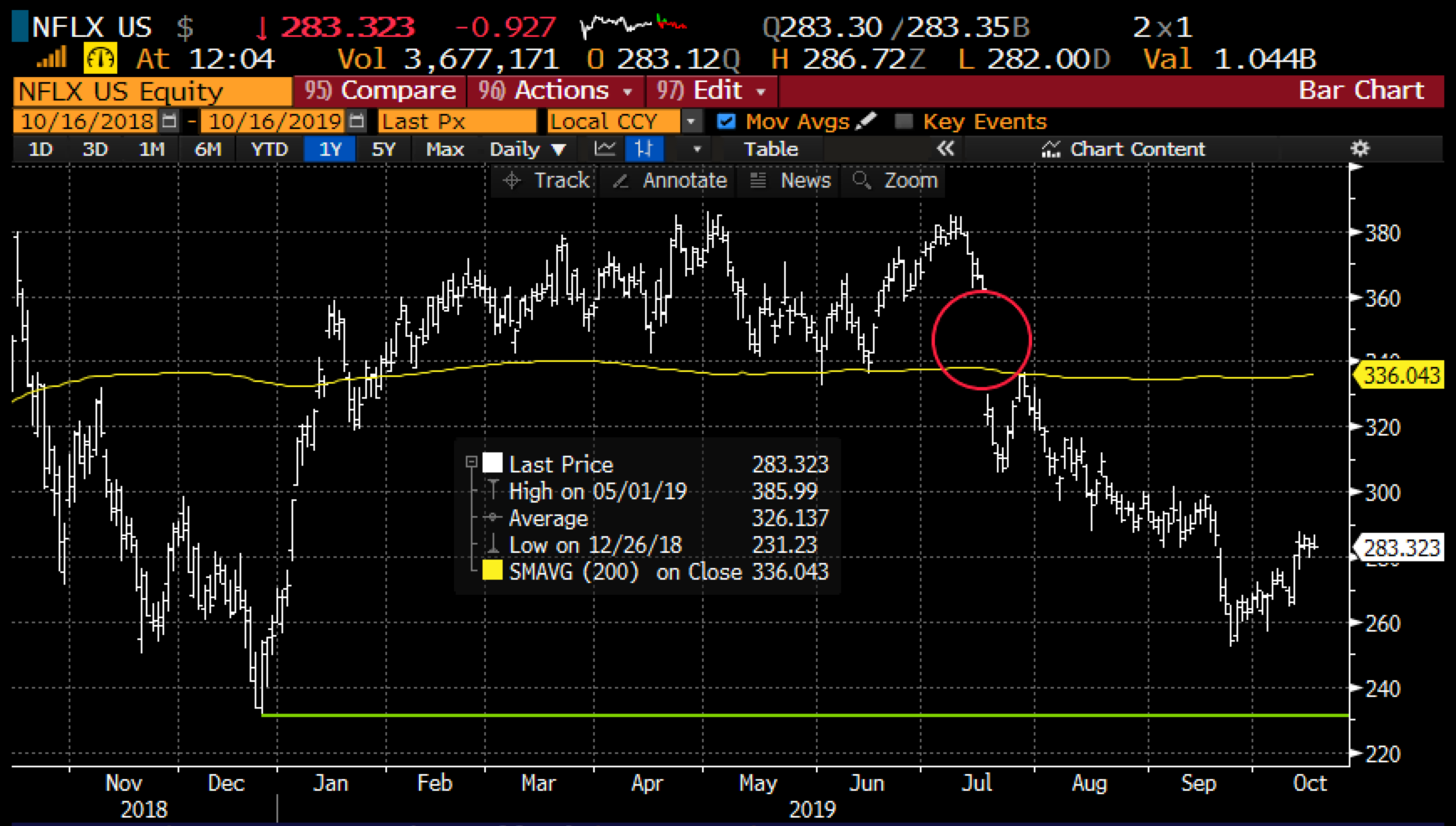 So what went wrong in Q2? The company saw its first sequential subscriber decline since 2011 in the U.S., losing 130,000 paid subs vs the expectation of a 300,000 gain. And it wasn’t just in the U.S. was subs were weak, international subs came in 2 million less than the 4.7 million consensus estimate. The company guided U.S. subs for Q3 to 800,000 below the consensus estimate of 890,000 but guided international subs above consensus by 750,000 to 6.2 million. Investors remain concerned with the company’s negative free cash flow, reiterating a burn of $3.5 billion for 2019.

As the implied move suggests, this is not an easy quarter to the game. if the company misses Q3 subs for the second straight quarter and does not show progress on the free cash flow burn then the stock will be on its way back to the Dec lows near $230. If the company is able to beat the Q3 guidance and guide Q4 higher than the stock will quickly be back above $300 on its way back to the July gap near $320. Inline quarter and guidance hough will not instill much confidence and the stock will likely be rangebound for a bit between $250 and $300.

So what’s the trade? With 30-day at the money implied volatility at 54%, near the highs of 2019, long premium directional trades are challenged into events like earnings knowing that short-dated options prices will get creamed.

But as I often warn, you need to get a lot of things right buying options in events like earnings, first and foremost directional, then magnitude of the move and of course timing.

On Friday’s Options Action on CNBC my co-panelist Mike Khouw detailed a calendar strategy which was a strategy to basically selling the implied move but doing so with defined risk.

What’s interesting about using a calendar spread to “sell the move” is that there are other ways to achieve this goal, but most entail selling naked options. Using the straddle above, if you were to sell the Oct 282.50 straddle at $29, then if the stock closed below $311.50 or above $253.50 then you would make the difference between the distance of the $282.50 strike but suffer losses above and below those levels. One could sell a strangle (an out of the money call, and an out of the money put, so different strikes). Both of these strategies could be used against long stock for those looking to add yield, willing to cap their gains to the upside at the amount of the straddle or strangle, but also willing to buy more stock at the short put strike (less the premium received for the sale). And of course, a long holder could either sell a call against long stock as a simple overwrite, or sell a put against long stock. These naked short premium strategies (when not against long stock) can take up a lot of margin though.