Over the last nearly 2 years since the start of trade tensions between the U.S. and China equity investors have been a tad manic. They have had a tendency to place too much emphasis on both positive and negative headlines about the prospects of ending the dispute or having it escalate further. The simple fact of the matter is that since late January 2018 (despite the Q4 20% peak to trough decline last year) the S&P 500 (measured for our purposes today by the SPY etf which tracks the index) has been in a reasonably well-defined uptrend with three new highs: 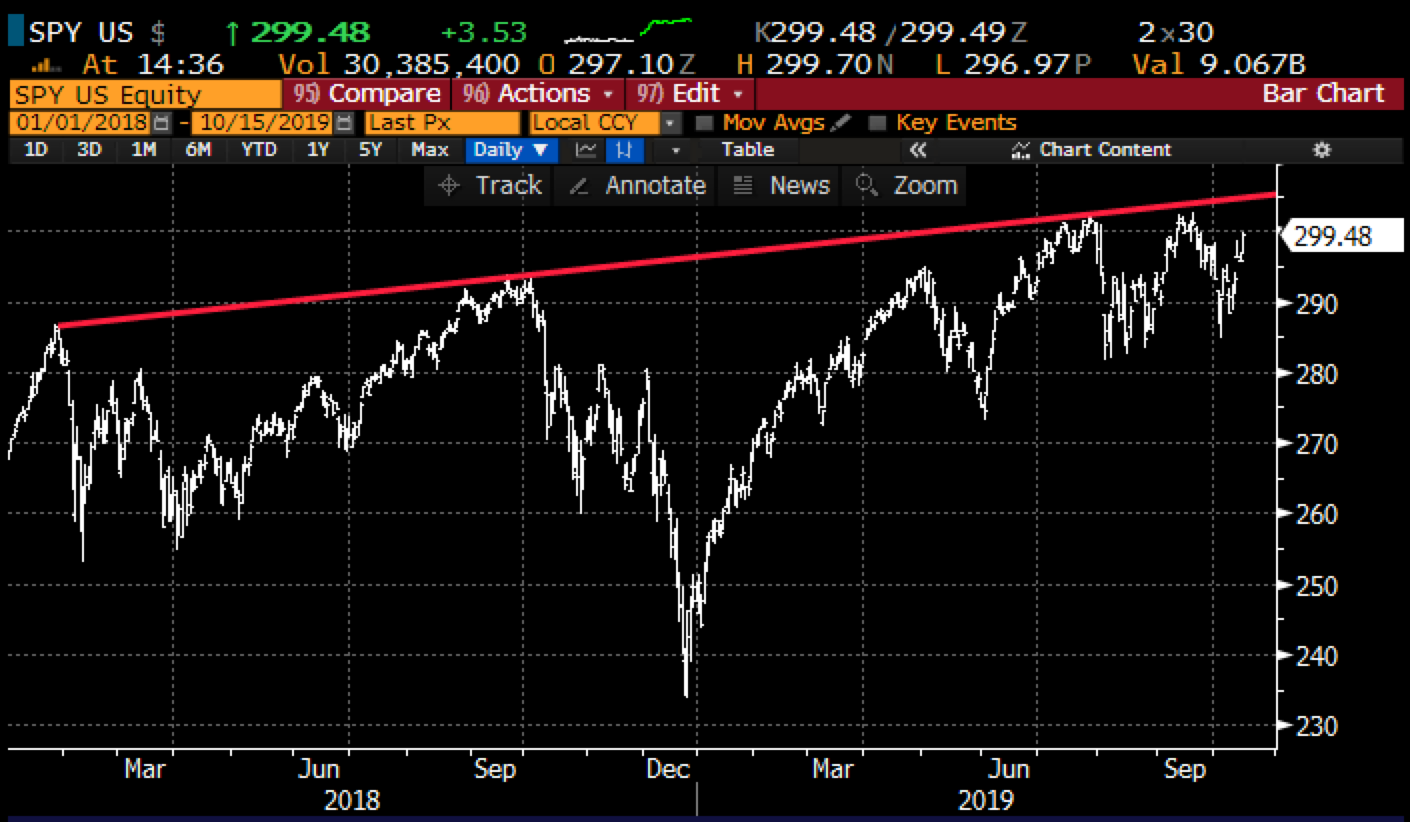 As I wrote in late August (I SPY Very Little Hustle in the Russell) those new highs have been ever so slight:

My views have been pretty clear about the progress, or lack thereof in the SPX over the last 19 months, there has been little, and each new incremental high from the prior has yielded real downside volatility:

On Sept 19th a little less than a month ago, the SPX followed this pattern, traded to an essentially matched high from July and then fell 5.5%. Now we are within a percent of the all-time highs, and with two of the main pillars of the bear case for global equities, trade war and Brexit possibly easing a bit, it feels like investors want to break them out and establish a new range above the prior highs. I will remind you this was exacltly how investors felt in Sept, July, April and of course famously in early October of 2018. What’s changed most in the last year is obviously interest rates, with the 10-year treasury basically half of what it was last fall, and importantly what the market is pricing for future rates.

For the life of me though, aside from the rate thing, I can’t see why sentiment is very different and I would also add that the longer trade and Brexit get kicked down the road, and the higher the SPX goes, even if ever so slightly from the prior highs the greater the risk to a meltdown like last Q4, and the next time it happens, with rates where they are we centrals banks might just not have the ammo to pull out a bazooka and cause a V reversal in risk assets such as equities.

So a new high is a foregone conclusion, but a new high in and of itself is not some sort of investing milestone, I would add that it will take some new leadership for the SPX to establish a new range above all of those prior highs, that does not consist of some of the stocks that got us here like Apple’s (AAPL) 50% ytd raise, or Proctor & Gamble’s (PG) and Walmart’s (WMT) 28% gains or the XLU’s (the etf that tracks utilities) 23% rise. I would add that all of these equities lag the performance of the broad market down, with some like PG having its worst day (down 2.4%) since late last year.

Just as I did in late August I think it is worth comparing large caps stocks to small-cap stocks, which many think are more telling of early economic weakness and its worth noting that the IWM, the etf that tracks the Russell 2000 small-cap index is still 12.5% from its all-time highs made in August 2018 and remains in a downtrend, dangerously re-testing key near-term support numerous times this year: 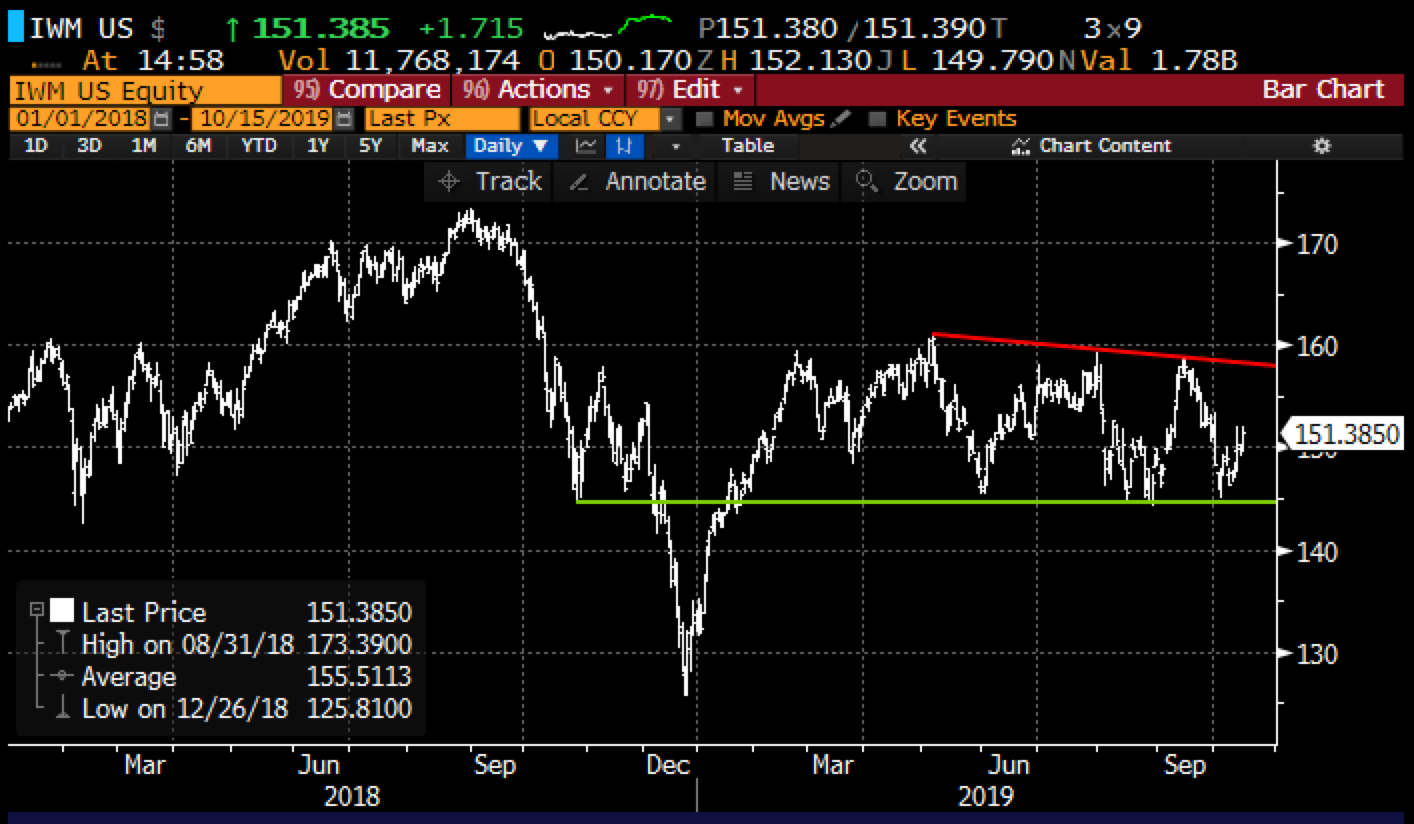 I would also add that expectations for Q3 earnings season were quite low, as my friend Peter Boockvar the CIO of Bleakley Advisory Group wrote in his newsletter The BoockReport earlier today:

With earnings time here, I promise that about 70% of companies will beat bottom-line estimates as they historically do and the 4% y/o/y expected Q3 EPS decline will likely end up around flat to -1%. Thus, that is where the bar is. With revenue estimates expected to show growth, the difference is continued margin erosion.

We are seeing stock rip on the strength of gains on the back of earnings from JP Morgan (JPM), and United Healthcare (UNH). It’s also worth noting that the high made in the last week of April in the SPY, and the high made in the last week of July, corresponded with the busiest week of earnings nearing the end of the period. The point here is that in both prior instances for Q1 and Q2 earnings, expectations were low, investors bought into the earnings period and once some early beats were out of the way, and the sentiment was positive with new highs, the SPY dropped 7 and 6% respectively: 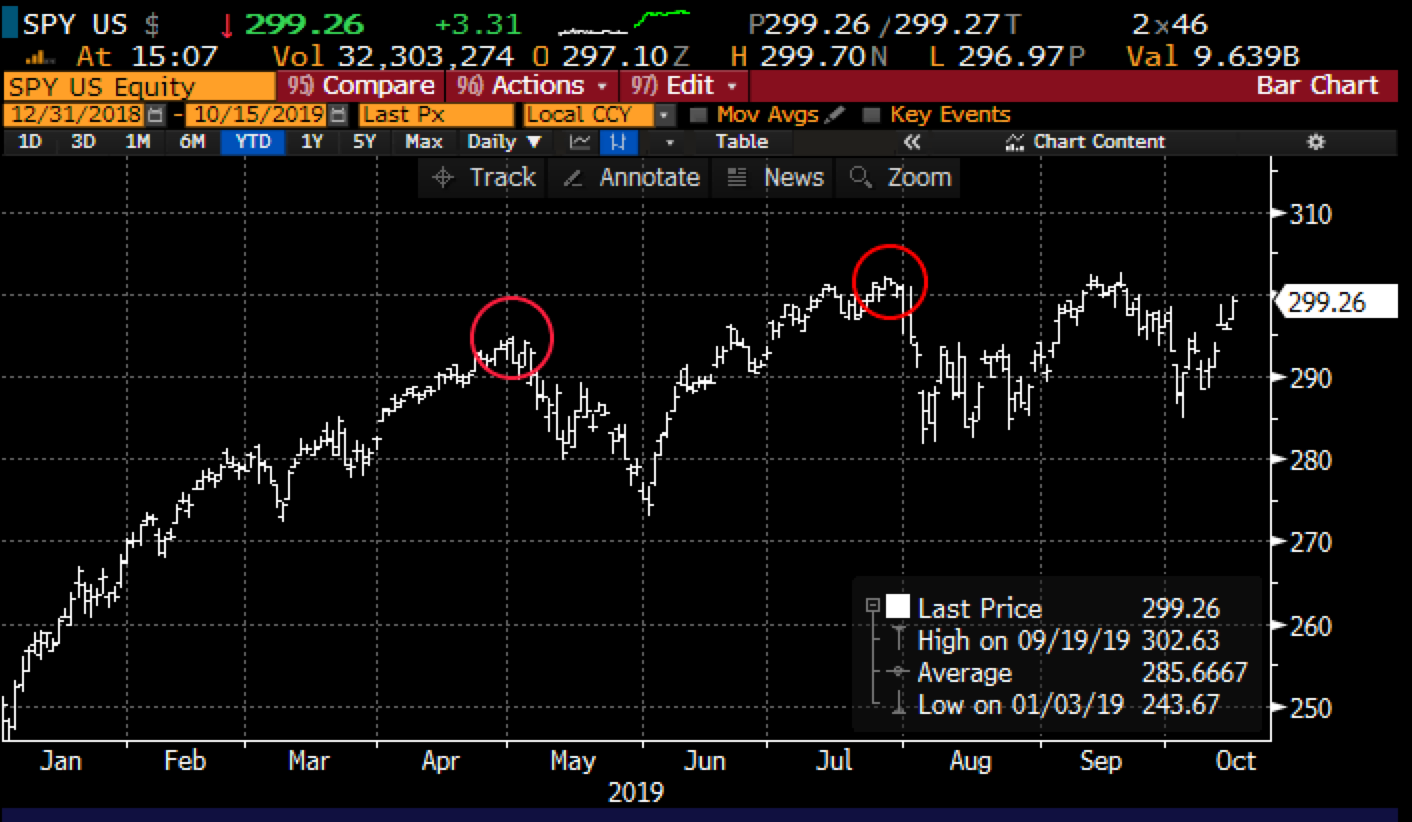 So is it too soon to lay the SPY and the IWM out on the short side yet? Probably lets see how broad the rally is at new highs in the S&P 500, and I suspect they come in a week or so towards the end of the month, but if the IWM can’t make any real progress as the SPY makes new highs, then I think at the very least you lean on the weak link and that is small caps.

I would add one more thing, short-dated options prices are nearing their 52-week lows, and given earnings season and all of the other macro uncertainties that markets faced I am hard-pressed to think that 30-day at the money implied volatility in the SPY gets much below 10%. So for those who lack patience (like me most of the time), with the SPY just above at $299.30, the Nov 15th expiration 299 puts are offered at about $4, or about 1.35% of the SPY’s price, with a break-even down at $295, down 1.5% from the current level.