Regular readers know that I have been routinely bearish on the prospects for bank stocks in the current interest rate and economic environment (read here, here and here). In my commentary on CNBC, I am usually faced with a panel of participants who like bank stocks based on their cheap valuations, strong cash return, and leverage to expanding economic & business cycles (?). It has been my view that the cheap valuations are really just compared to prior cycles when the banks used far more leverage, interests rate were not helping then that much a year ago when the 10-ye treasury yield was 3.25% and it is certainly not helping (aside from mortgages) with the 10-yr yield cut half from those levels and the 2-10 spread flat. When harangued by the panel about my bearish view I usually just respond with something like this “if you have to buy a bank just buy JPM, the only large-cap bank in the world that has made a new high since the financial crisis… but it on every dip if you have to… but avoid the investment banks like GS & MS and money-centers like Citi with lots of global exposure”. My thought process is very simple, banks are supposed to the lifeblood of any strong economy, the relative underperformance of the stocks with the S&P 500 (not to mention global bank stocks which far underperform their local markets) suggest investor concern or where we are in the business cycle, and that the volatility in interest rates, not clearly in downward trajectory are a bad sign for all of the above.

But RiskReversal is a service dedicated to detailing the ways investors/traders can use options to define their risk in the equity markets, which sometimes means being contrarian or going against one’s broader macro view.  On Friday’s Option’s Action on CNBC, we discussed JPM kicking off earnings season tomorrow morning before the open, but we will also get results from GS, C, BLK, and WFC, or about 27% of the weight of the entire S&P Financial Select ETF (XLF) which tracks the group. In the clip from Fridays show I detailed what I think is the easiest way to play for a sustained breakout in JPM between now and year-end for those inclined to think that a combination of Trade War and Brexit progress coupled with a less panicky but still dovish global central bank stance could mean equities close near their highs of the year…

Banks kick off earnings season next week, and @RiskReversal has a way to play one name. $JPM pic.twitter.com/rjWVAQUBWe

Here is the chart with the $120 level which is either going to stand as epic long-term resistance, where the stock could not get and stay above before it failed or it does so on some sort of catalyst and prior resistance now becomes support: 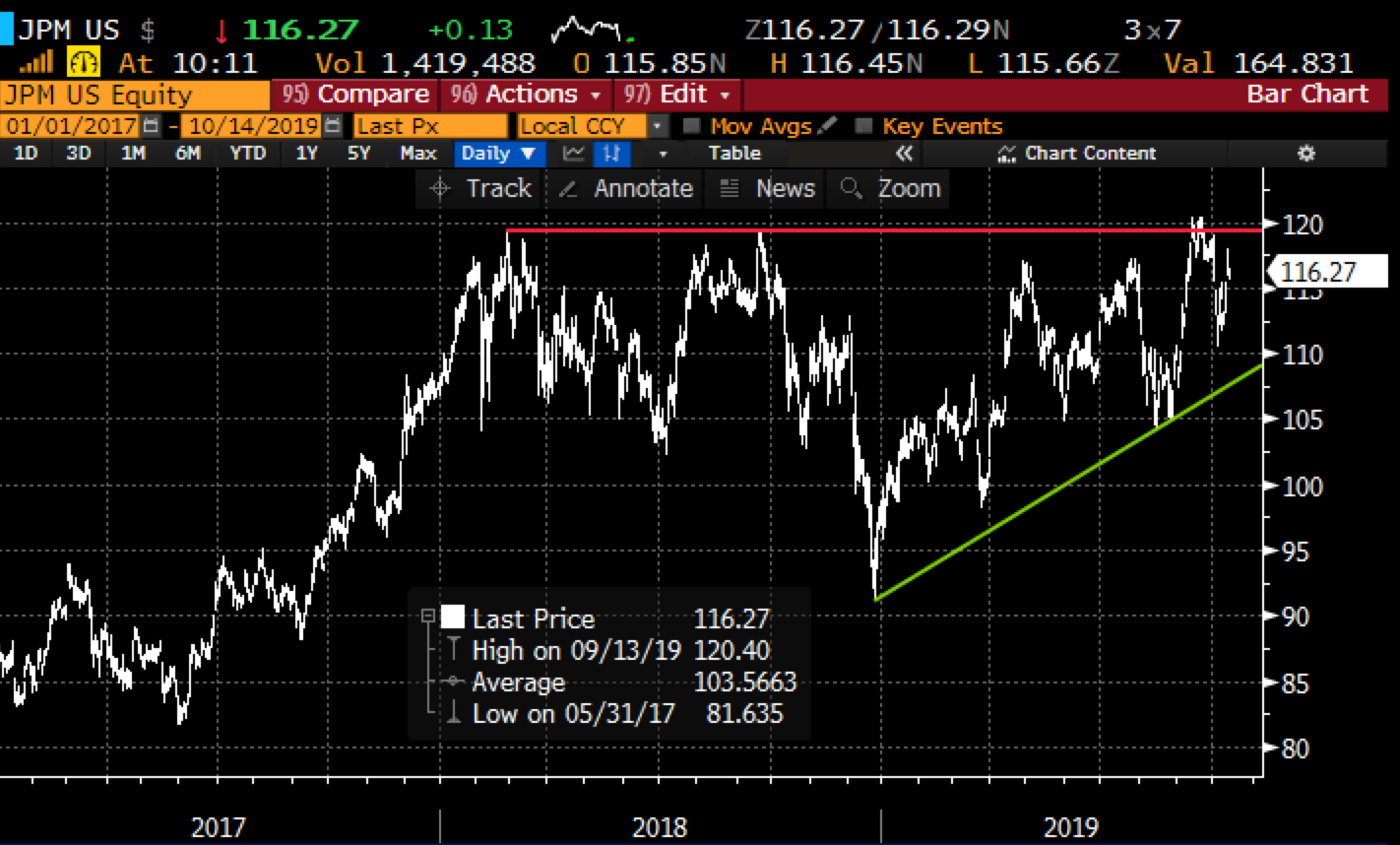 It is worth noting that the uptrend from the Dec 2018 lows near $110 should serve as important near-term support.

Oh, and when we talk about the power of a breakout after a long base, as legendary technician Louise Yamada has said for decades “the bigger the base, the higher in space”… a good example of this might be Nike (NKE) which broke out above long-established resistance near $90 following earnings last month: 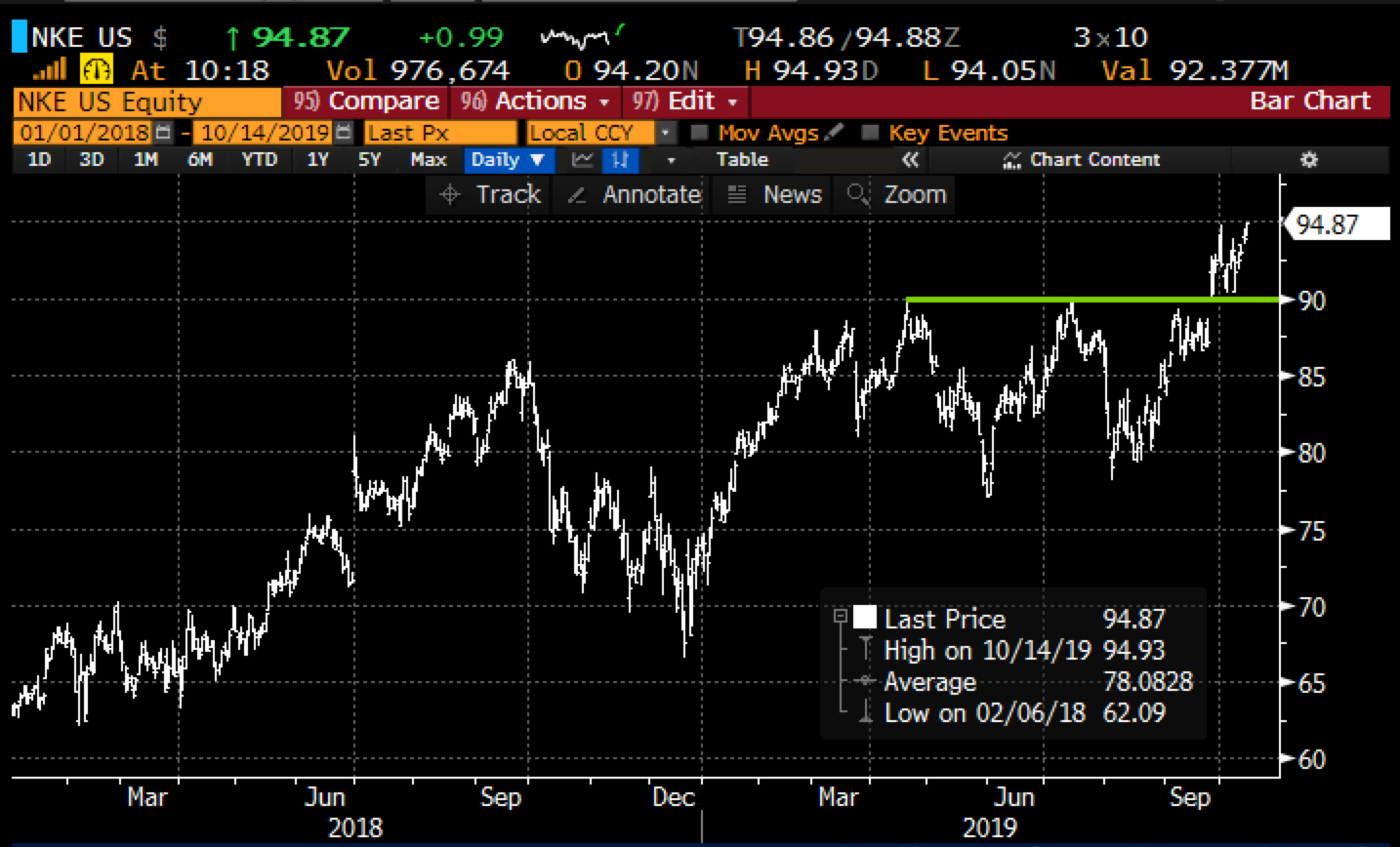 So the play for thoe that are constructive on the broad market, and think the SPX finally breaks out and established a new range above the prior highs dating back to Jan 2018, and believe that JPM will be part of the leadership that helps the broad market do something it has failed to do since 2017, establish a new trading range, then defining one’s risk is a best of breed bank like JPM markes sense.

Rationale: this trade risks 2.2% of the stock price with a break-even up 5.4% for the next two months with no shortage of potential catalysts. Unfortunately, there are only $5 wide options strikes in Dec because I would probably have been more inclined to do a Dec 118 – 125 call spread which would have likely cost around $2.25, giving me a lower break-even and a higher probability of success.

ALTERNATIVELY for those that think bank stocks are stuck in the mud, and the guidance given this week will put an end to any and all bullish sentiment in the group for the balance of the year then look at short-dated puts in the XLF. With the XLF at $27.65 the Oct 18th weekly 27.50 puts are offered at 20 cents, less than 1% of the etf price, with a break-even down 1.3% on Friday’s close. These could serve as a great hegde for those long banks stock but uncertain about this week’s action.

The XLF has clear technical resistance just below $29, and decent support on the rising uptrend just above $26. IN my opiunion the etf is likely to spend the rest of ther year grinding that wedge tighter and tighter until we get some resolution in early 2020. 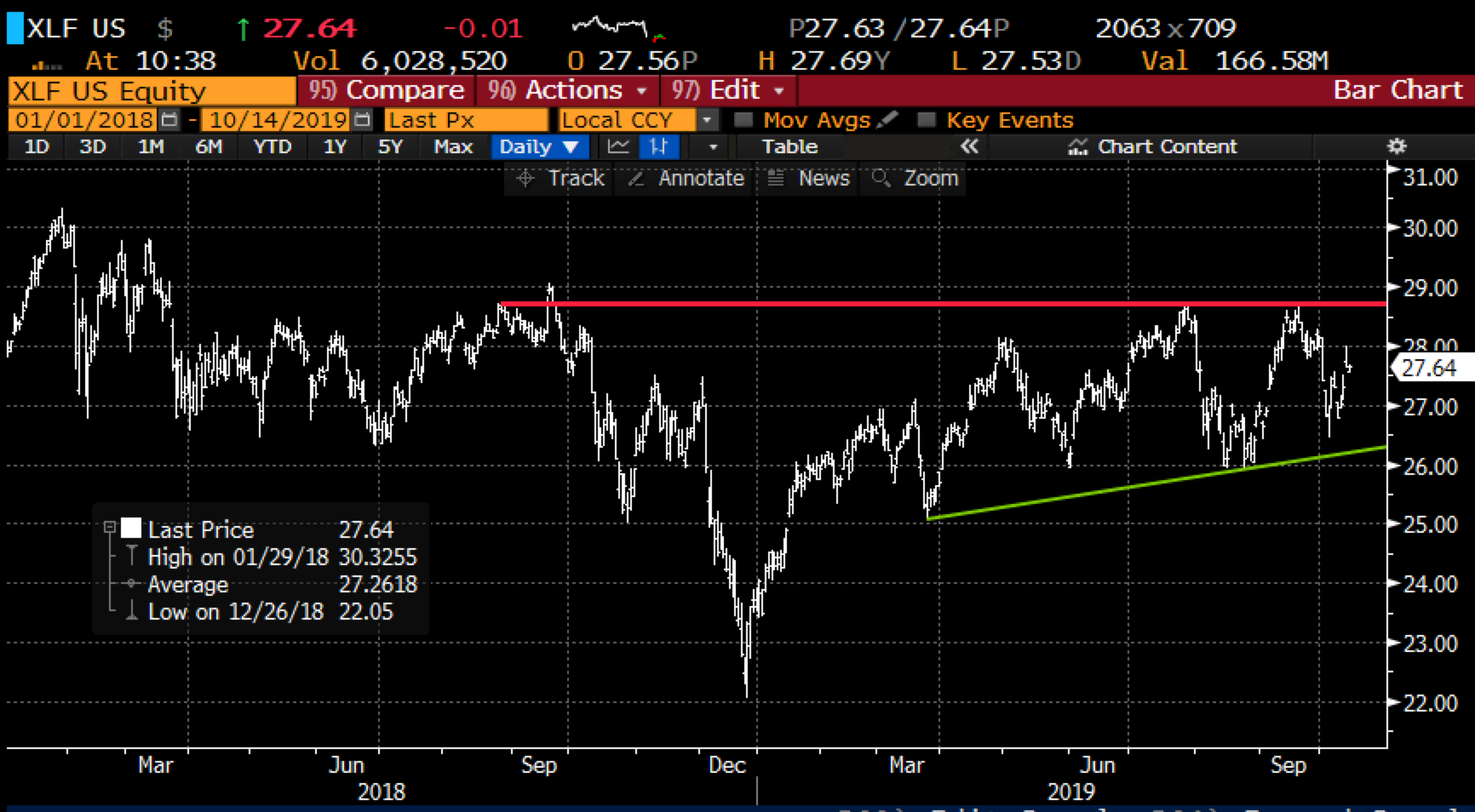