On Tuesday’s Fast Money program on CNBC, my co-panelist Tim Seymour made a PowerPitch to buy shares of Cisco (CSCO):

.@TimSeymour has his eye on this beaten-down Dow stock for a breakout. He makes his case. $CSCO pic.twitter.com/gE2ubh3hQR

Tim made a good case based on some secular shifts in their growth areas night have legs despite macro-headwinds and the company could be on the cusp of a re-rating based on their potential for a higher percentage of recurring revenue in the future.  I get all of that, and frankly, as I mentioned in the clip I thought very similarly (read here) to Tim prior to their Q4 print in mid-August that featured decent results but a disappointing outlook, specifically blaming weak global demand as a result of the ongoing trade war with China.

But barring some grand trade deal in the next 24 hours, there is a strong likelihood that existing tariffs stay in place through at least the end of the year and companies continue to delay large capital expenditures. If that remains the case I suspect companies like CSCO which have already warned of the headwinds caused by tariffs and weak global trade, are going to have a very hard time offering an upbeat outlook heading into the final couple months of the year.

Shares of CSCO are down 2.3% today as I write on a downgrade by of the stock from a Buy to a Hold by Goldman Sach’s telco equipment analyst Rod Hall, on “concerns over spending trends in both enterprise and telecom”, per Bloomberg:

-expects enterprise spending “will continue to weaken,” while telecom spending activity “will remain depressed in the near term”
-Weakness in telecom “could persist well into 2020” as carriers pause ahead of 5G
-Goldman’s indicators for enterprise spending “continue to deteriorate,” and are expected to continue weakening ahead of next year’s elections
-Most of this weakness relates to a lack of business confidence at large enterprise driven by trade volatility,” rather than being driven by a macroeconomic slowdown

The stock’s decline today is placing it below a key near-term support level, down 20% from its 52-week and nearly 20-year highs made in July: 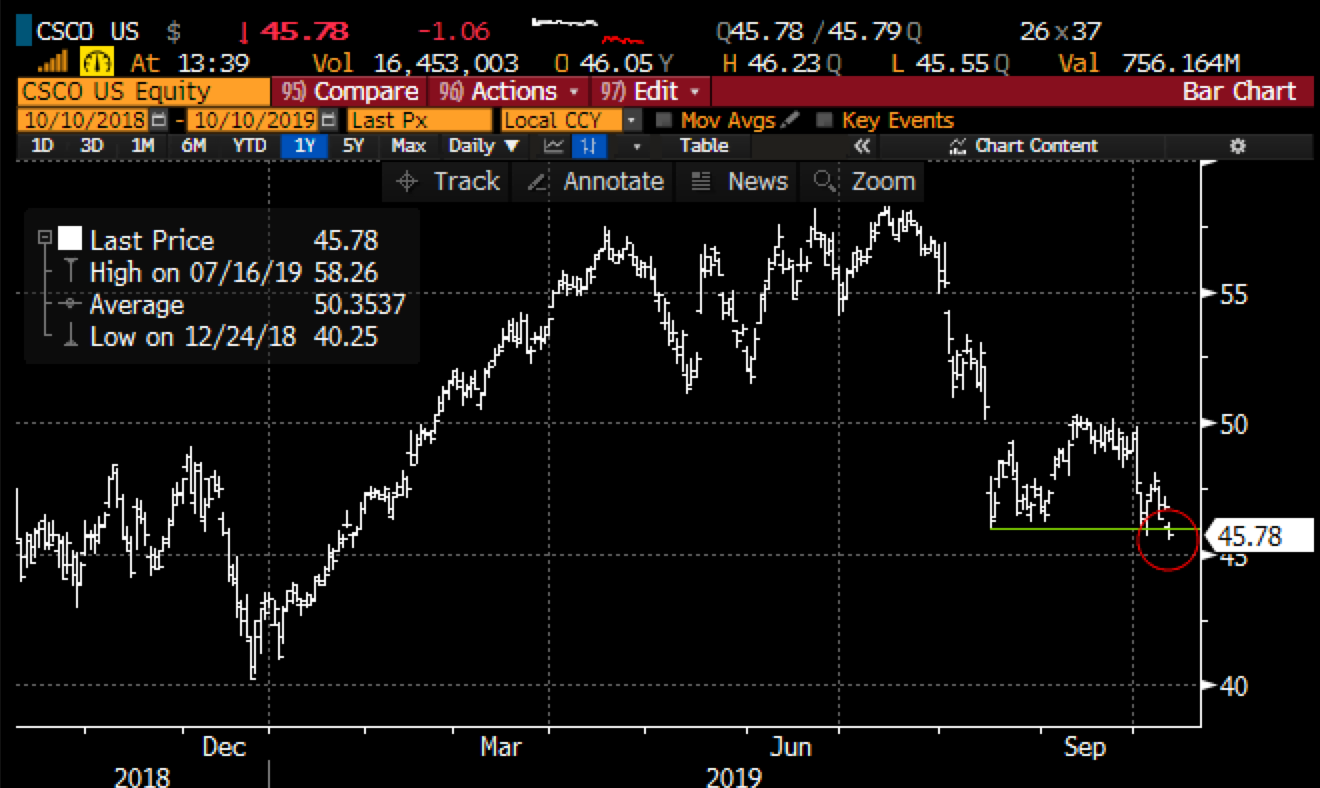 Looking at the five-year chart you can see the stock flirting with the uptrend that has been in place since mid-2017, with the next stop on the downside near the Dec 2018 low near $40: 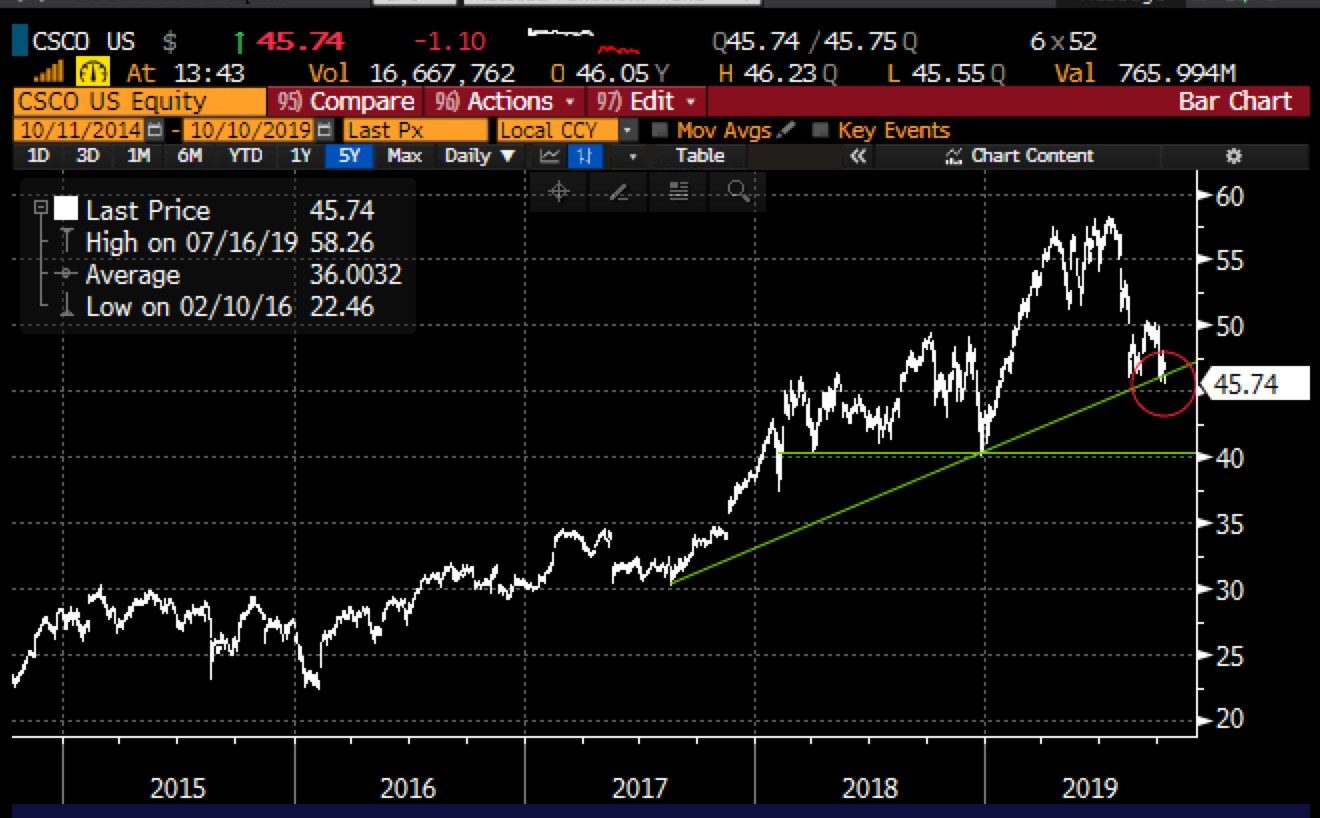 Short-dated options prices have risen of late, with 30-day at the money implied volatility at 27.5%, which is just a smidge above its 1-year average of about 25.5%. Given the fact that the company will report its fiscal Q1 results on Nov 13th, prior to Nov expiration, options prices look at least fair and possibly cheap for those looking to make defined risk directional bets in the stock.

So what’s the trade? If I were inclined to play for weak results and another guide down and a re-test of the Dec 2018 lows near $40, I might consider put spreads in Nov expiration, for instance:

Rationale: this trade idea risks 2.4% of the stock price, for a break-even down 4.15% in a month, a month that catches the earnings of most of their customers, their own earnings and any trade-related headlines. For long holders of the stock, this could serve as decent near term protection mitigating possibly 8.5% of the stock price if it is down 12.6% in the next month or so.

I would also add that if you think there will be a limited trade deal this week for both sides to save some face then it might make sense to wait a day or two and see what sort of follow-through stocks have ( I suspect any pop will be short-lived).

Lastly, CSCO’s outlook is important because they don’t only sell to businesses and telcos, but to governments, and while their outlook can often be complicated it is a fairly broad read across large institutions spending intentions, and across geographies.

Finally, I remember very clearly that CSCO’s Nov 2007 earnings call that featured unexpected weak guidance when the SPX was at its then all-time highs ended up being the canary in the coal mine for the global economy…. without a substantive trade deal soon, are we about to see a repeat? 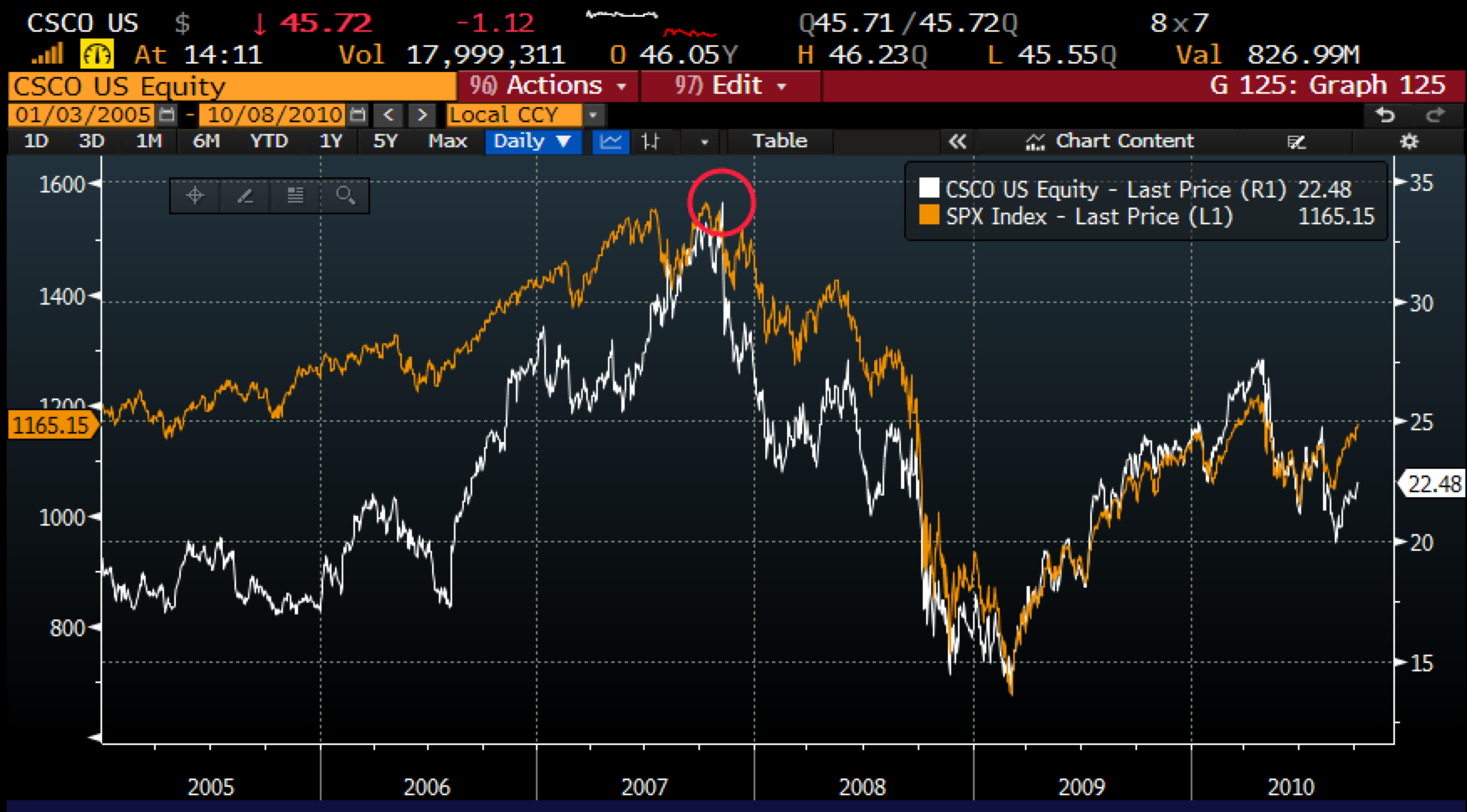