FedEx (FDX) will report their fiscal Q1 results today after the close. The options market is implying about an $8.50 move between now and Friday’s close, or about 5% move in either direction (most of which is for Wednesday’s post-earnings reaction). Over the last year, the stock has been volatile the day following results, rising 2.5% post Q4, declining 3.5% post Q3, down 12% post Q2, and down 5.5% post Q1.

Despite the stock’s 15% rally from its 52-week lows made late last month (placing the stock up 6.5% on the year), ths stock is still down a whopping 34% from its 52-week highs made last September, and 38% from its all-time highs made in January 2018. From a technical perspective, the stock held this summer at a key support level near $145 dating back to mid-2016 and the recent rally places it above the downtrend that has been in place for the last year… all pointing to its attempt to put in a bottom: 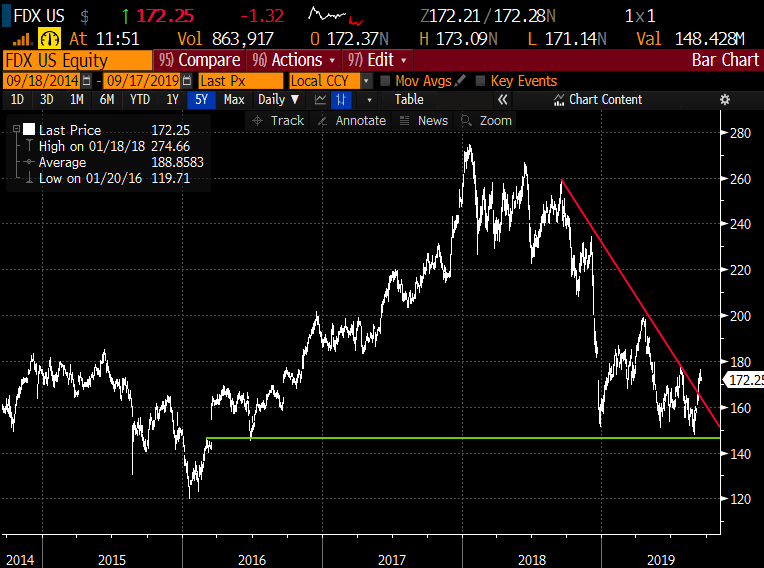 Backing the chart out a bit to the 2009 Financial Crisis lows it becomes clear that the recent low was flirting with a massive technical break… but that uptrend remains a crucial support level: 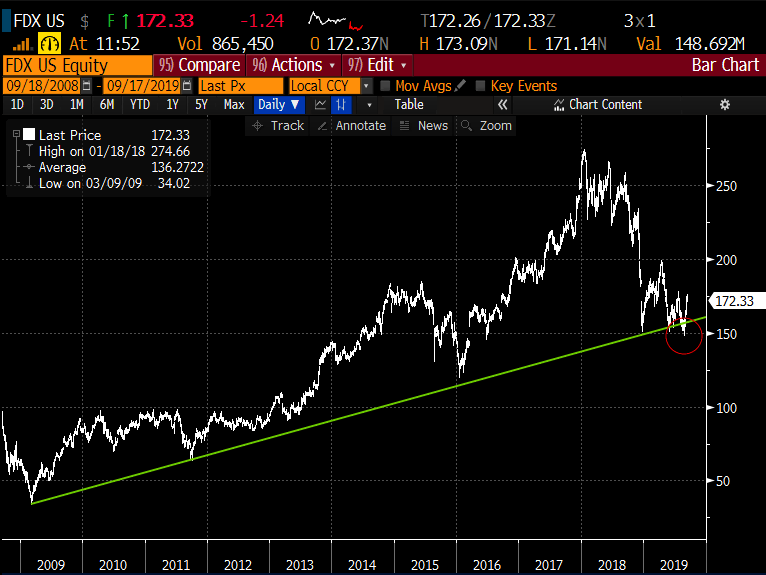 Wall Street analysts remain fairly constructive on the stock with 21 Buys, 7 Holds and 2 Sells, largely I suspect on valuation, trading about 11.5x expected FY2020 eps, despite mid-single-digit declines on 2% expected sales growth. The company’s business is faced with the double whammy of being in Amazon’s sights, but also on the front lines of the trade dispute with China, as the company is suffering from weaker volumes resulting from less trade, but also the target of the Chinese in response to their companies being targeted by the U.S.

My Take Into the Print:

If I were inclined to play for a bounce (as my co-panelists on CNBC’s Options Action laid out on Friday’s show, watch here) I might consider similar trade ideas that include call spreads, but not selling puts to finance the purchase of calls or call spreads… I might consider just buying calls and look to spread on a pop in the stock, for instance

Rationale: Short-dated options premiums are elevated, with 30-day at the money implied volatility near 35%, but these calls that risk 4% of the stock price, for a break-even up 5.8% allow for a good bit of time and good bit of optionality for those who think the stock could work its way back towards (or above $200) in the coming months. Spreading these calls in Nov out of the gate does not make much sense as the Nov 200 call is about 70 cents bid, or a little more than half a percent of the stock price, and only 10% of the cost of the 175 call. They don’t do much for you in the event that you are wrong on the direction. 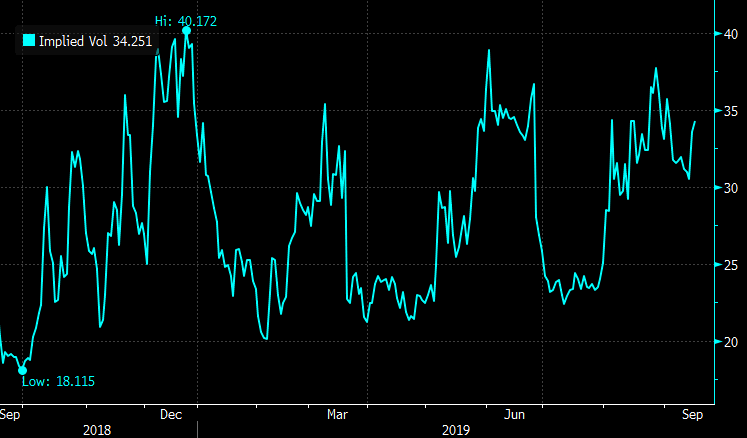 Or for those that think the stock will retest the recent lows... consider short-dated put spreads looking to play for a quick move lower on a miss and guide lower, for instance…

Rationale: as I said above, short-dated options prices are expensive, so long premium directional trades in weeklies are a low probability bet for a large gain, you need to get a lot of things right to merely break-even, first and foremost direction, but also magnitude of the move and of course timing. this trade idea risks 1.75% of the stock price for three trading days and breaks even down 3%. Again this would be for someone who is very convicted on a miss and is ok with risking what they are willing to lose.

For comparison’s sake, if you were looking for the decline to play out over weeks, the Oct 170 – 150 put spread can be bought for $4.60 with stock around $172, which widens out the potential decline, increases the premium at risk, lowers the break-even but allows for more time. These are the sorts of considerations one has to make when choosing strikes and expirations.