In early August (TLT: Bonds, Shaken and Stirred), for the second time this year, I updated my thoughts and bearish positioning via the options market on long term Treasury yields via the TLT, the iShares 20-Year Treasury ETF:

Since early Spring it has been my view that U.S. Treasuries would remain the beneficiary from the ongoing trade war with China:

This from March 6th (Bonds Shaken, Not Yet Stirred):

At the time the TLT, the 20-year U.S. Treasury etf was trading $120 and I laid out a defined risk way to play.

Then in late May when the TLT was just below $129 I updated this trade idea and rolled the bullish view up and out, at the time suggesting (TLT: Bonds… Shaken & Stirred):

Well, the Fed cut last week suggesting that trade tensions remain the largest determinant about further rate cuts, and give last week’s tariff increase by trump, Fed Fund futures are now pricing in a 100% chance of a 25 basis point cut at the Fed’s Sept meeting.

Well TLT shut up to nearly $150 in late August but has since come in hard as the rhetoric on the trade front appears to be a bit more conciliatory than it was in early August, and macro data that might only speak to a 25 basis point rate cut when the Fed meets on Wednesday. The one year chart below shows the parabolic ramp in the TLT in August that started with trump’s threat to increase tariff’s on consumer goods, a day after the Fed said they were monitoring trade tensions as they were a clear determinant in what they called the prior day’s 25 basis point cut, the first by the Fed in ten years as a “mid-cycle adjustment”. 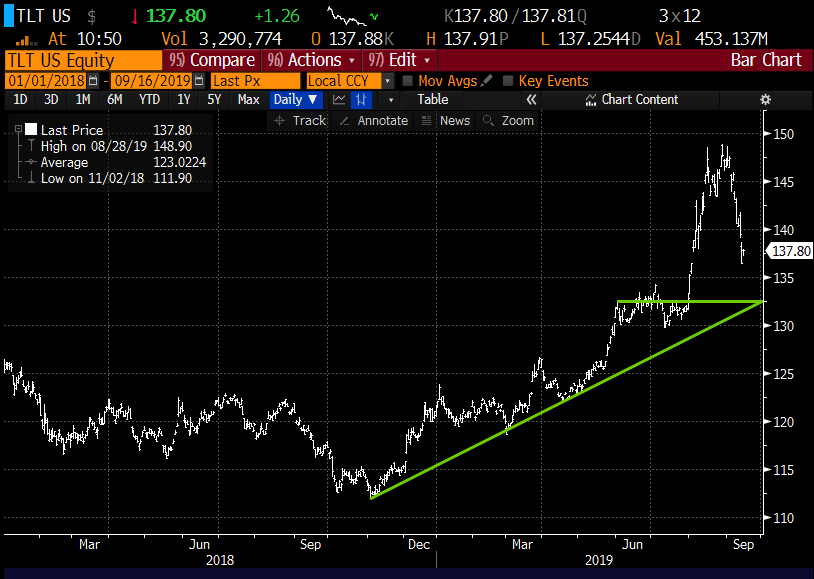 On Friday’s Options Action my co-panelist, chartist extraordinaire Carter Worth of Cornerstone Macro made a bullish case for the TLT, watch here:

The most interesting chart to me though was of the 10-year Treasury yield testing the downtrend that has been in place since last fall after the precipitous drop in August: 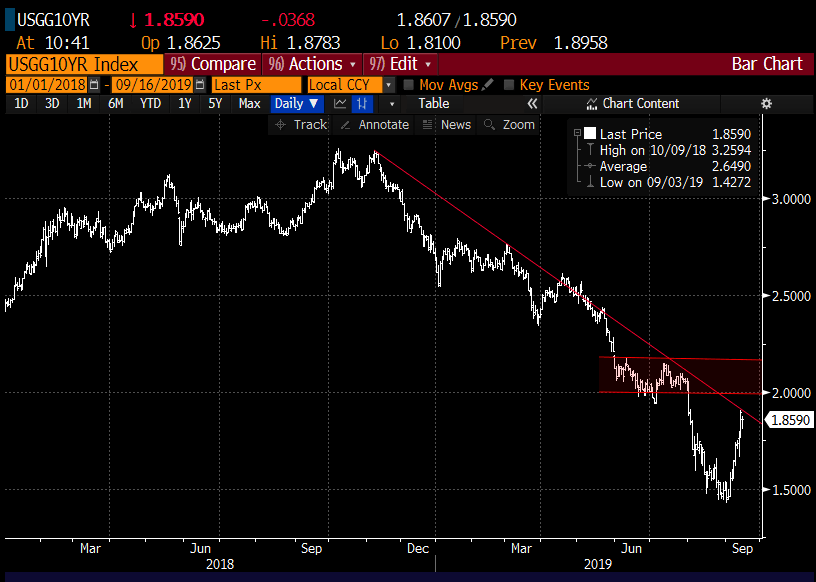 It is worth noting that just as the downtrend is not perfect, as Carter has informed me, the best lines, the ones that tend to hold up most frequently are the ones that connect the most dots. While it is not always that easy, it is worth looking where an overshoot could be and that would clearly be a re-test of the psychologically important 2% level.

Mike detailed a trade idea to capture a decline in treasury yields, thus a bounce in the TLT between now and November expiration, targeting a move back towards the mid $144s from $136.50 where it was on Friday’s close. MY comment on the trade was that short-dated options prices have risen substantially in the TLT this year, with 30-day at the money implied volatility doubling since the Spring… options prices were too cheap in May at 7% IV and now at 15%  they are clearly pricing in a good deal of movement, nearly 2% in the TLT a day.

If I were inclined to play for a re-test of the recent highs in TLT I might consider the following trade idea in Dec expiration:

Rationale: this trade idea risks 1.5% of the etf price, breaks-even up 3% and offers a max payout that is 4x the premium at risk if the ETF is up 8.7% in three months, just above the recent highs. This is a favorable risk-reward for those who have a conviction that rates turn back lower.