There seems to be little in Washington that D’s & R’s can agree on, but when it comes to mega-cap tech companies, there is a sort of bi-partisan whack-a-mole contest that is not likely to abate anytime soon. This morning’s doozy reported by the WSJ… House Committee Requests Tech Executives’ Emails in Antitrust Probe:

Congress is ramping up its probe into the tech industry, with House lawmakers demanding emails and executive communications from four technology giants as they look for evidence of anticompetitive behavior.

Committee Chairman Jerrold Nadler said the requests will aid a continuing investigation, citing “growing evidence that a handful of corporations have come to capture an outsized share of online commerce and communications.”

I want to look at GOOGL largely because the quarter and guidance the company put up in late July and the stock’s subsequent 10% one day gap higher. 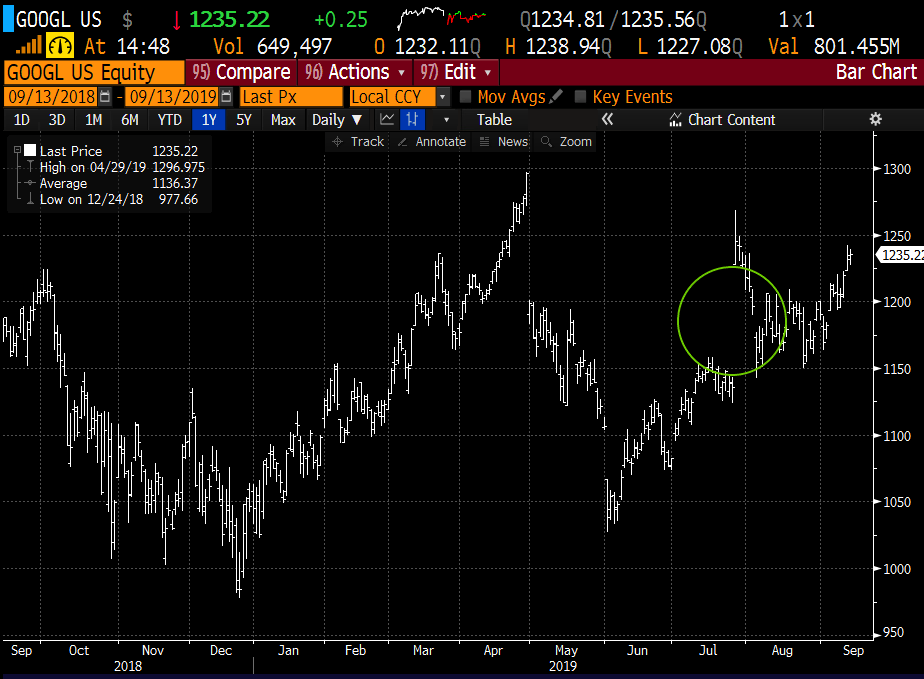 Top Ranked Internet analyst Mark Mahaney from RBC Capital, who rates GOOGL a buy with a 12 month $1425 price target highlighted the following points about the quarter and guidance in a note to clients on July 25th (emphasis mine):

Q2 Results By The Numbers: Gross Revenue of $38.9B was nicely ahead of RBC/Street, with strength driven by the Three Horsemen: Mobile Search (helped by Q2 redesign & ML innovations), YouTube & Cloud. Vs. Q1, Revenue Growth accelerated across the board – across verticals and regions. In context, Q1 was the outlier, as Q2 growth rates were very consistent with prior levels. GAAP Op Income of $9.2B came in approx. 8% above RBC/Street, largely due to better than expected leverage in S&M and G&A. All in, Fundies were reasonably positive – 22% Organic Revenue growth acceled 3 pts vs. Q1 and matched the 9-year average, while GAAP Op Margin fell a modest 130 bps Y/Y (adjusting for EC fine).

If you think there is a chance the stock puts up similar results in Q3 and can guide higher for Q4, then I suspect investors will be gunning this stock into year-end above the prior highs at $1300. It makes sense after the recent 7% rally in the stock to look to play for a sort of near term consolidation, and look to finance calls that will catch the earnings event in Nov expiration by selling some shorted dated out of the money premium that does not catch earnings. This trade structure is called a call calendar and here is one that make sense if you think that GOOGL can test or make new highs post their Q3 results in late October…

This trade performs best with a gradual move towards the 1300 strike over the next five weeks into Oct expiration. If the stock is below 1300 Oct expiration the short 1300 call will expire worthless and the trade will be left naked long the Nov 1300 call. If the stock is close to 1300 then the Nov 1300 call should have appreciated as it will have picked up deltas. At that point, it might make sense to further reduce the premium at risk by selling a higher strike call in Nov turning the trade into a vertical call spread. The max risk f this trade is the $15 premium paid, and would be at risk with a large move below the current level, or well above the 1300 strike.