Shares of Netflix (NFLX) closed down 2% following news of Apple’s pricing of their soon to be launched video streaming service that is half the cost of Netflix’s cheapest offering. For those who have stated for years that NFLX’s early lead in streaming and their data aggregation will give them a massive moat when deep-pocketed media and tech companies finally enter the fray are in the process of having that belief tested. It doesn’t seem like much of a coincidence that the stock topped out in the Spring just after their announcement of their largest subscription price increase to date and around Disney’s April 10th Investor Day where they gave long-awaited detail of the content and pricing for their Disney+ ott service set to launch in November.  Then prior to their Q2 earnings in July, the stock failed to make a new 52-week high as plans for Apple’s streaming offering began to take shape, just as the company reported their first quarterly subscriber loss in the U.S. since 2011… the stock has barely seen an uptick since. The triple top dating back to last fall, and the massive gap on their Q2 earnings have created massive technical resistance between $340 and $380 on the chart: 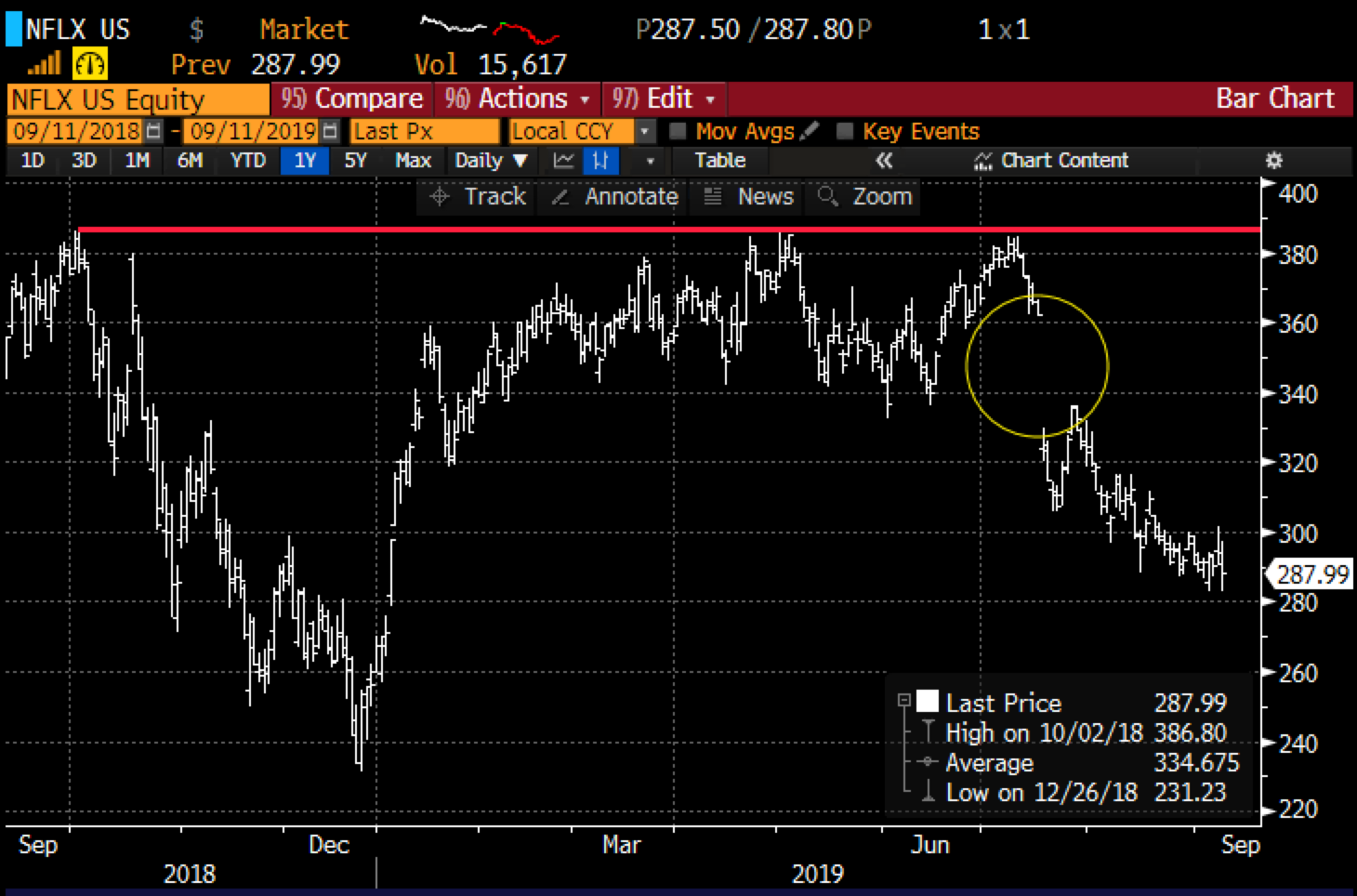 The five-year chart of NFLX on a log scale shows the truly extraordinary rise of the stock from early 2015 near $45 to almost $450 in early 2018. But the stock’s 30% decline from those highs has placed the stock below the uptrend that has been in place since mid 2016: 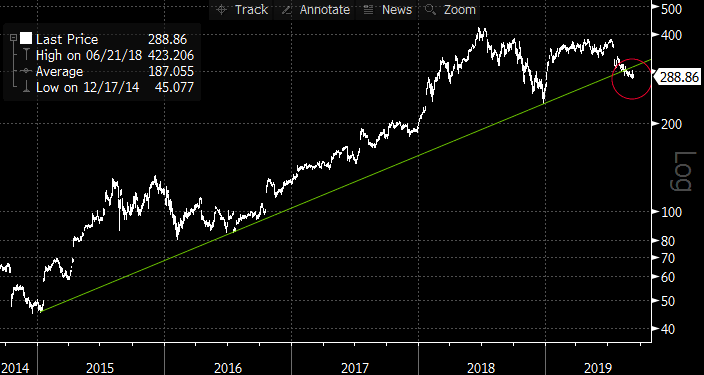 The five-year linear chart shows the stock approaching that uptrend, which is important technical support, either way, the stock needs to stabilize here or we could see much lower lows… 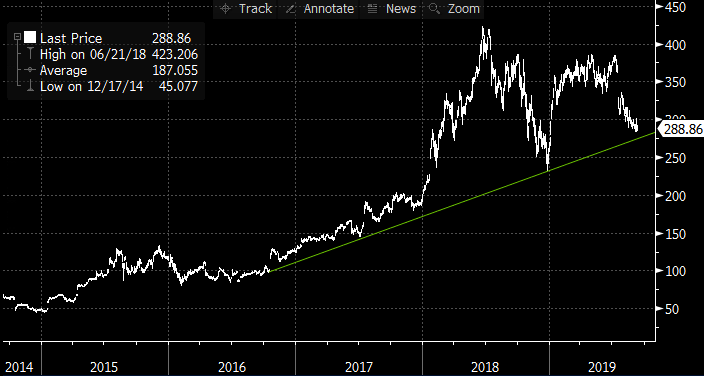 Interestingly, despite the poor stock performance of late, short-dated options prices are relatively cheap in the name, with 30-day athe money implied volatility at 33% (blue line below), just above 30-day realized volatility (how much the stock has been moving, the white line below), both not far from their 52-week lows:

What this chart says to me is that those looking to make defined risk directional bets can do so with options in a manner that gives them slightly better odds than at most time over the last year on long premium bets.

As for catalysts, AppleTV+ & Disney+ launches on Nov 1 & 12th respectively will be at the forefront of investors minds, especially after what has already been a drop in U.S. subs, that might, or might not have to do with the price increase in the spring. But before the two launches, investors will hear from the company in mid-October on their Q3 call and any further declines in U.S. subs, coupled with greater than expected negative free cash flow as they step up content costs to compete with the new entrants, and the stock will be quickly on its way back below $250 imo. Which makes sense because the options market is implying about a $30 move in either direction between now and October expiration, or about 10%, which seems fair, especially considering the stock has moved on average 12% the day following earnings over the last ten years.

So here’s one for all of you MCU nerds (me included)… who will soon no longer be able to see any of The Avengers on Netflix… Just as the Thanos Snap in The Infinity War, was inevitable, the content of Marvel, Lucas, Disney & Pixar, and soon WarnerMedia, NBCUniversal and original content from HULU, Amazon, Apple will all likely be gone from NFLX in the months, years to come, In April we got the Iron Man snap-back from DIS CEO Bob Iger and it would appear that Tim Cook, Jeff Bezos, Randall Stephenson, and Brian Roberts all have something to Avenge for the use/misuse of their family jewels for the last decade.