On Tuesday, September 10th Apple (AAPL) will hold their annual iPhone release party! Much like recent years past the new designs and form factors are not likely to surprise and wow existing users as the phones, for the most part, have been evolutionary, with incremental improvements despite rising prices. For those who want a sense for what to expect I recommend listening to Bloomberg’s Mark Gurman long time Cupertino product whisperer on a podcast this week (here).

The options market is expecting little fireworks with the at the money weekly straddle in the stock (the call premium + the put premium) equalling a little over $5, or about 2% in either direction, which is basically a little higher than the stock’s weekly implied movement. Short-dated options prices are cheap, despite the stock’s recent movement picking up. The chart below shows 30-day at the money implied volatility in blue (the price of options) vs 30-day at the money realized volatility in white (how much the stock has been moving:

With prices coming in, and realized staying bid, the 10 point differential, for the time being, makes short-dated options look cheap for those looking to make short term directional bets.

The stock in the chart is also at an interesting spot, just below $215 which has served as technical resistance since its early November 2018 breakdown: 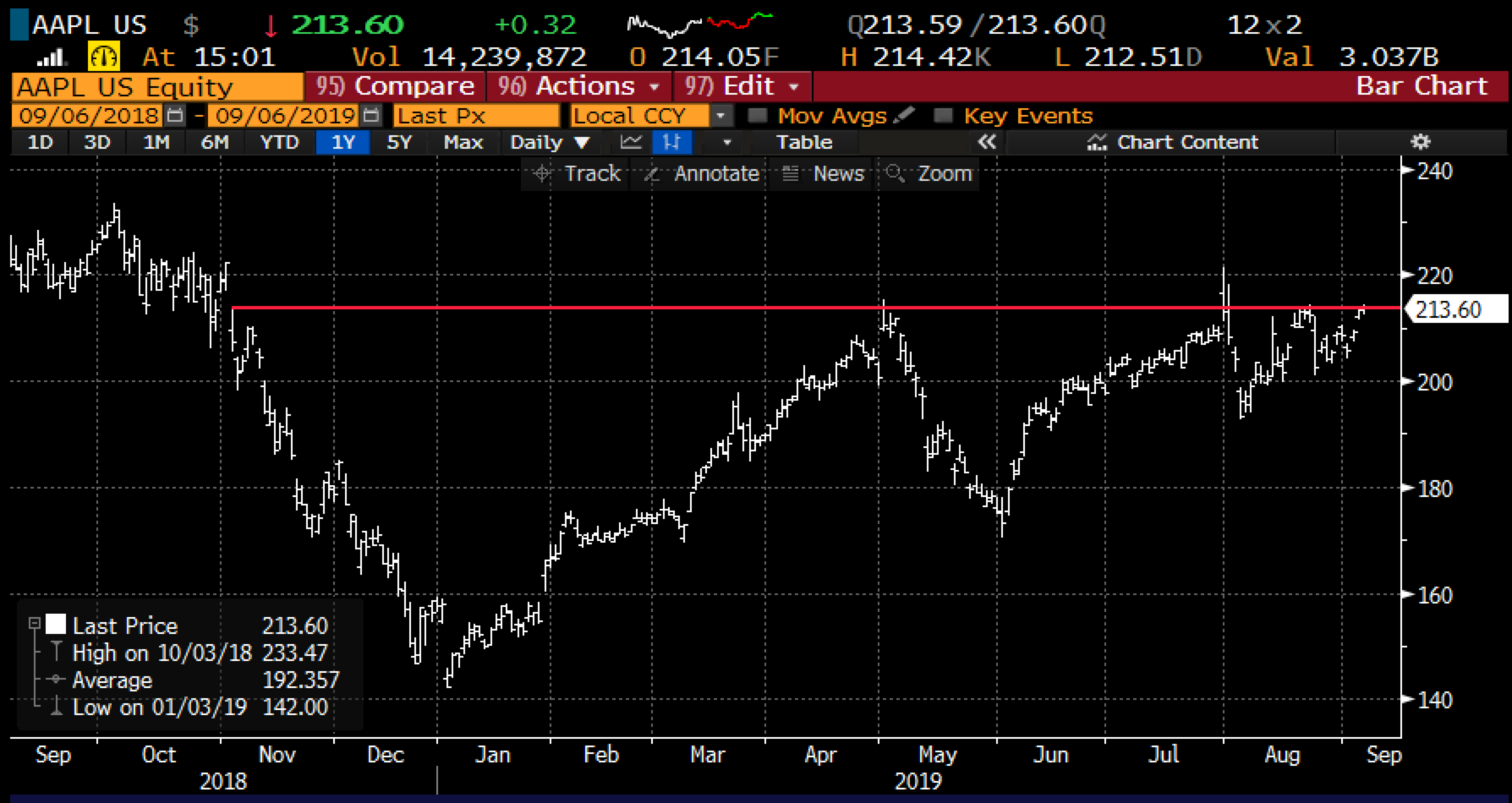 It is worth noting that on July 31st shares of AAPL gapped to a new 10-month high following their FQ3 results,, but the stock found sellers at $220 and the stock quickly retreated below $215. The following day on August 1st trump tweeted a threat of new tariffs on consumer goods made in China, which would affect many of AAPL’s products and the stock dropped another 10%. It has since recovered on the pushout of some of the tariffs and optimism that talks between the U.S. and China later this month or early next month could yield a positive outcome for AAPL, which would be one of the most adversely affected U.S. multinationals by any escalation in the trade front. AAPL could face the double whammy of U.S. consumers putting off upgrades of phones if the company tries to pass on the increase (or face lower margins by them absorbing them or a mixture of both) AND the longer the trade war goes on the greater the potential for Chinese consumers to choose local smartphone brands like Huawei which happen to be a lot cheaper than Apple’s iPhone.

Additionally, I, like options market makers in the name, suspect next week’s event to be uneventful and we could see the stock consolidate some of its recent gains, possibly offering a better entry point. I would also add that the headlines around trade have caused serious volatility in stocks like AAPL of late and timing them can be hard, so long calls could be an attractive stock replacement for existing longs, defining one’s risk to the premium paid. Also, these product launches tend to be “sell the news” events as the leaks have been plentiful and the likelihood of big surprises are not great and it might make sense to buy calls for those playing for easing of trade tensions or a run-up into earnings after the event on Tuesday.

Obviously most of the points made about short-dated calls being cheap are also true for puts, but mildly less so as traders are usually forced to pay higher vol levels for puts than they are for calls that are equally out of the money.