On June 20th shares of Slack (WORK) went public through a direct listing on the NY Stock Exchange at a reference price of $26, opening that day at $38.50, trading as high as $42, but then possibly in sympathy with other extremely high valuation, money-losing, recently public tech companies, the stock has been in a 45 degree downtrend. This morning the stock gapped lower to very near the opening reference price of $26 on its first set of results as a publicly-traded company that investors were initially disappointed with, per Barron’s:

Second-quarter revenue, at $145 million, came in ahead of the Street’s consensus of $141.3 million. Non-GAAP operating losses, at $55.6 million, were narrower than the $76.2 million Wall Street expected.

In June, the company told investors to expect an adjusted net loss of 19 to 20 cents per share on revenue of $139 million to $141 million for the quarter ended July 31. Slack also guided for adjusted operating losses of $75 million to $77 million, including one-time expenses of $32 million associated with its direct listing.

The results marked Slack’s first quarterly report as a public company. On Wednesday, it told investors to expect full-year non-GAAP losses of 40 to 42 cents per share on revenue of $603 million to $610 million and non-GAAP operating losses of $176 million to $180 million.

All of those numbers were up from the guidance management gave in June. Wall Street is currently looking for losses of 42 cents per share on revenue of $601 million and operating losses of $180 million.

But it appeared that $26 was the magic number on the downside for the second time in a few months as it appeared shorts started to cover there this am, and investors used the gap to add to longs: 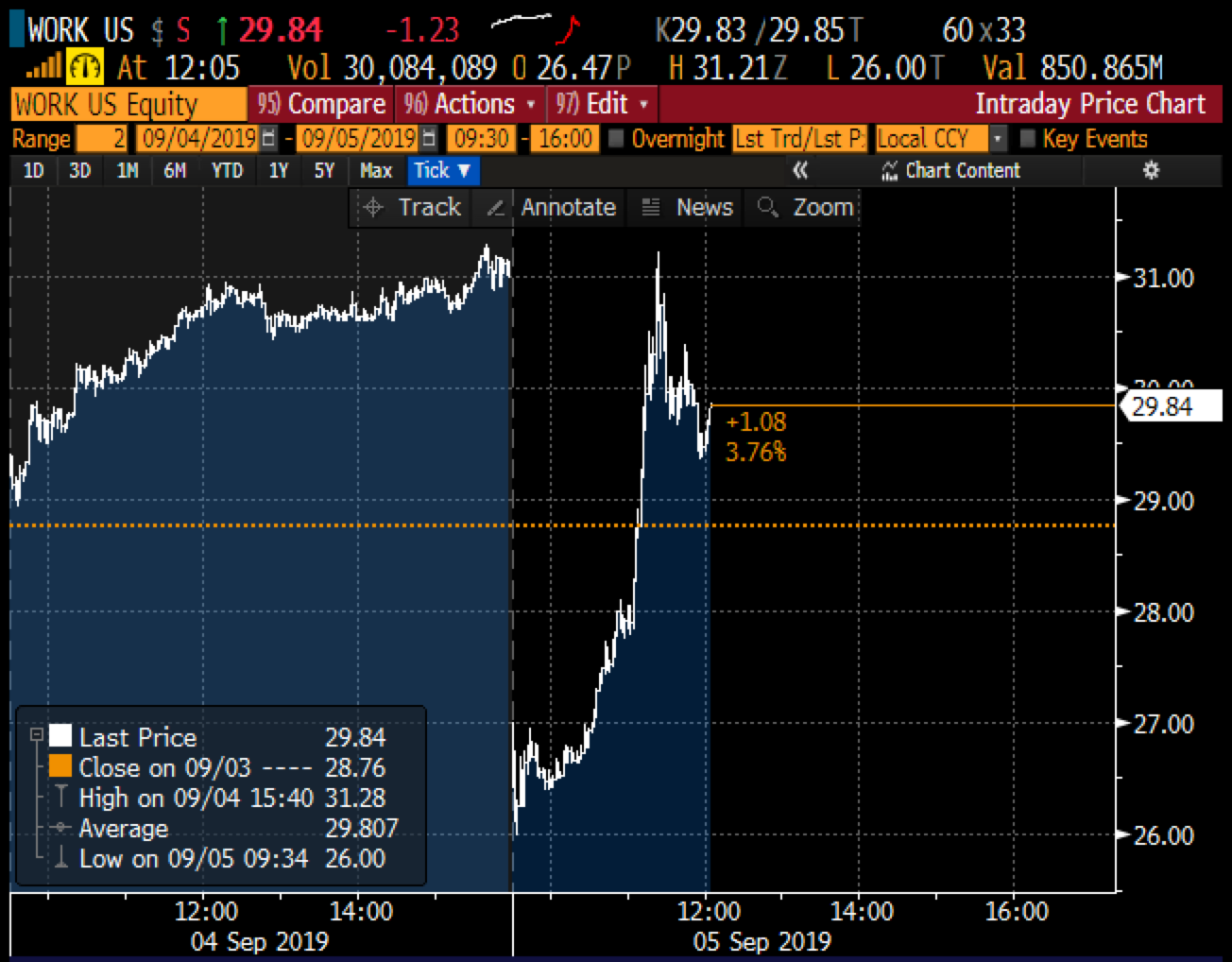 The chart below since the direct listing shows the downtrend which the stock saw some technical resistance after an intra-day reversal of 20%, I’d say traders have a new range now to play against: 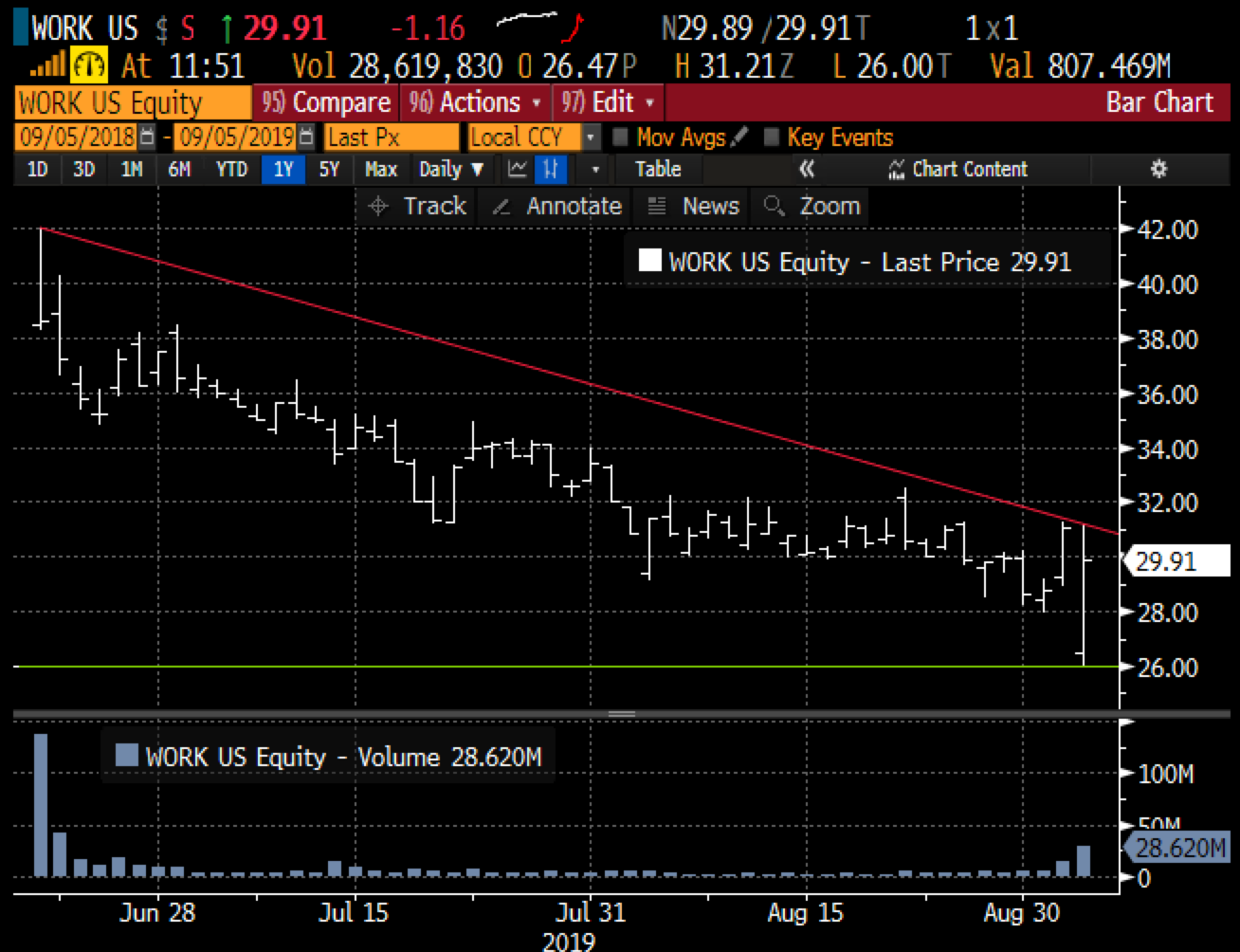 So here is the deal with WORK, with a market cap now of just over $14 billion the stock trades 17x expected fiscal 2020 sales of $843 million and faces stiff competition from the very company it set out to disrupt, Microsoft (MSFT) and companies like Facebook (FB) that would love to use its reach to push into enterprise applications and of course Google’s Alphabet which already has with their G-Suite offering. These three companies have combined market caps of $2.5 trillion and combined cash balances of $300 billion dollars. In my mind this company should be a feature of a much larger company’s platform… and if the stock continues to decline, despite their dual-class of shares, they may very well be forced to entertain a take-over that they can not refuse.

For the time being, I suspect $26 should serve as technical support. Its also worth noting that as the stock slid into this morning’s earnings gap, short-dated options prices had been rising into the print with 30-day at the money implied volatility topping 80%. It has come down today pretty massively but remains fairly high in the mid-50s, suggesting that market makers in the name think that the jury is still out on the stock: 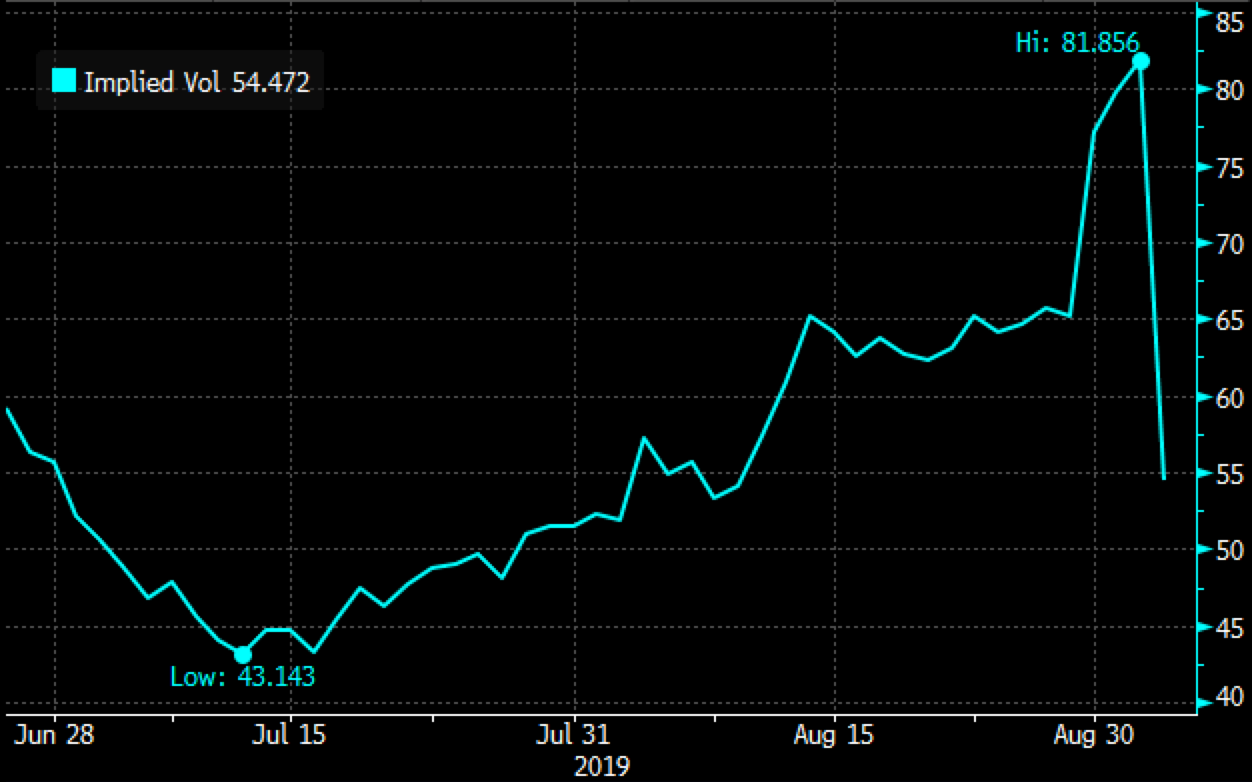 The next identifiable catalyst for WORK will be what MSFT has to say on their competing Teams product on their next earnings call in October, but then obviously WORK’s next report due out in early December.

To put some context around expected movement in the options market, the at the money straddle (with stock $29.70) the Jan 30 straddle (the call premium + the put premium) is offered at about $8, or about 26% of the stock price. If you bought that straddle not making a bet on direction, but on potential extreme movement you would need a rally above $38 or a decline below $22 by January expiration to make money.

If I was looking to be constructive and play for a breakout above the range described above and comfortable with $26 as a mental support level I might consider a risk reversal in the stock, looking to sell a downside put and use the proceeds to buy an upside call… for instance…

Mark to Market prior to expiration:

Rationale, for those who want to be constructive and gain long exposure over the the balance of the year but not convicted on the entry point this strategy allows for plenty of wiggle room with the worst-case scenario being put the stock at $26 on January expiration, down 26.5% from current levels, and suffering losses below, while allowing for gains above $35. The highest probability outcome is that the stock is in between the long call strike and the short put strike at August expiration in the trade is neither a winner or a loser.