Tomorrow morning prior to the open The Home Depot (HD), TJ Maxx (TJX) and Kohl’s (KSS) all report earnings. Given what should be viewed as mixed consumer data last week, these reports might help give us a sense for consumer discretionary spending intentions headed in the fall.

The Home Depot seems like the one to focus on giving the mixed housing data of late despite the precipitous drop in interest rates and what might be higher costs for input costs for goods made with products adversely affected by trump’s tariffs.

The one day implied move is about 3.5% (about $8 in either direction) vs the four-quarter average one-day post-earnings move of about 50 basis points.

Shares of HD up nearly 21% on the year are outperforming the S&P 500’s (SPX) 16.5% ytd gains, with the stock down only 5% from an all-time high made last month. The one-year chart shows the stock’s failed breakout in July above the prior all-time high made last September prior to its 26% peak to trough decline into year-end and the mild breach of the uptrend last week from the December lows. 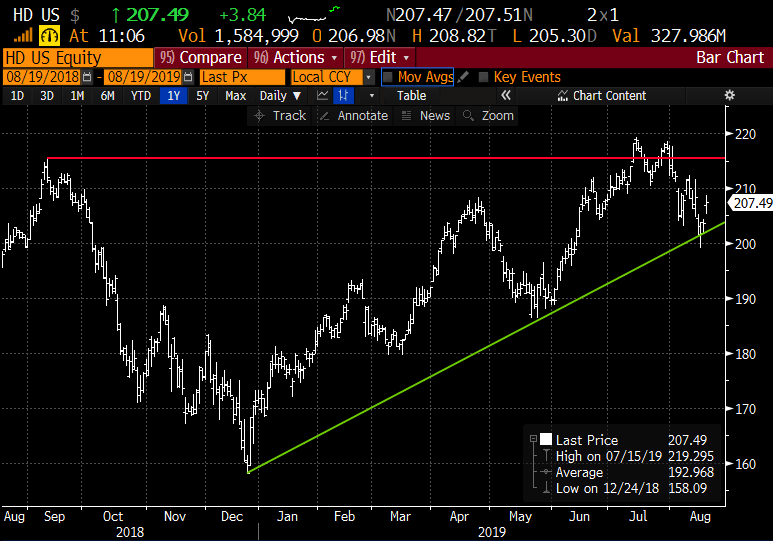 The implied move puts the stock either near last week’s lows or near the July highs. But the highest probability outcome is somewhere in between as the stock has generally not been a big move post-earnings.

On Friday’s Options Action on CNBC, my co-panelist Carter Worth, chartist extraordinaire offered a constructive view on the chart on an absolute basis and relative to the broad market, watch below:

My other co-panelist Mike Khouw suggested that the stock’s 20 P/E is fairly reasonable given its earnings growth but that short-dated options are very elevated with 30-day at the money implied volatility 25%, up from 15% a month again and down from 30% a week ago: 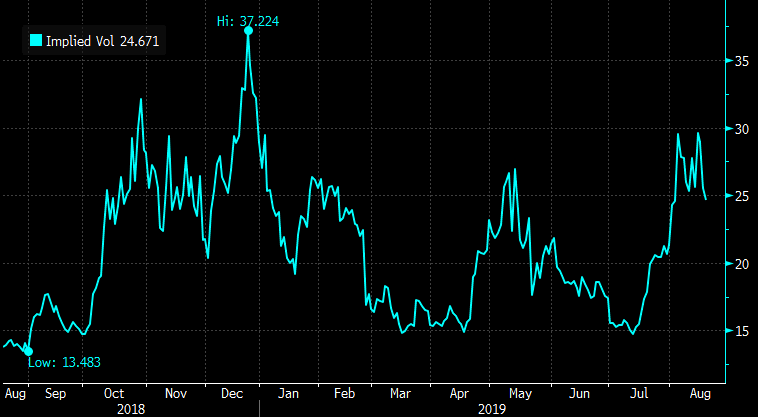 Mike’s trade idea when the stock was near $203.50 was to buy the Sept – Jan 210 call spread for $5, selling the shorter-dated 210 call in Sept where options premiums are elevated and buying the Jan 210 call… the idea here is to have the stock to settle near 210, and have the short calls help finance the longer-dated calls that he would own outright after Sept expiration and likely looking to play for a re-test and a breakout of the prior highs. 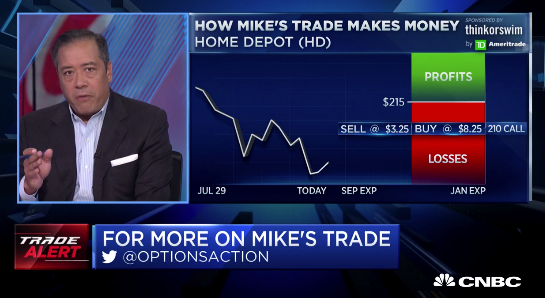 As I said in the clip, Mike is attempting to be constructive in HD post-earnings. With the stock up a couple of percent today it might make sense for those considering a similar strategy to move the strikes a bit higher possibly to $215.

The two and half year chart below shows the resistance range between $205ish and $215ish with the next real support level below last week’s low near $200 just above the May low near its 200-day moving average at $191.50: 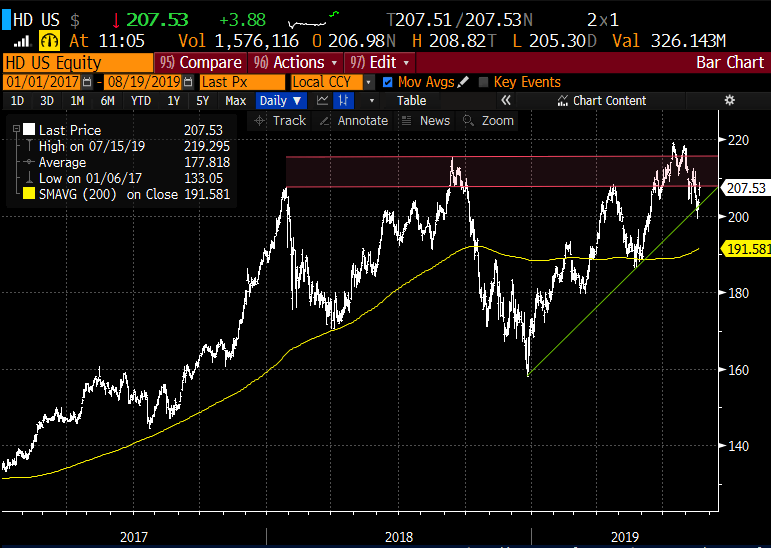