Following Facebook’s (FB) Q2 results on July 25th the stock gapped up to its highest levels in a year, since the stock gapped lower last July from its all-time highs, losing more than $100 billion in market cap in a single day, which crescendoed into a 43% peak to trough decline at its lows in December. The stock’s post-earnings reversal has the stock now testing the uptrend that has been in place since the December lows. To suggest this is an important technical support level near-term is an understatement as the next real support level is $160, the early June low caused by news reports that the FTC and the DOJ were “gearing up to investigate whether Amazon, Apple, Facebook and Google misuse their massive market power“. 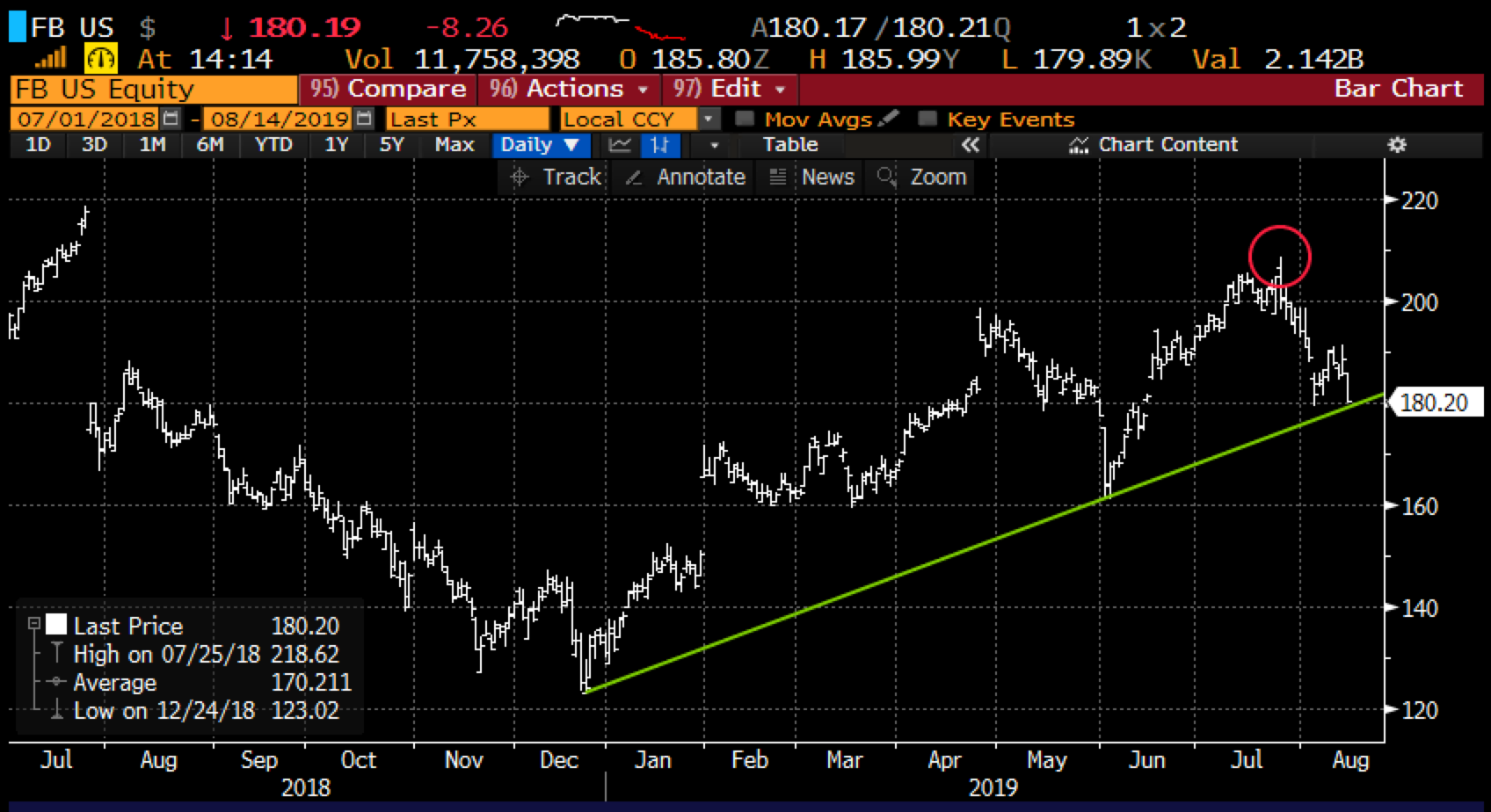 Since early June the company agreed to pay a $5 billion fine to the FTC, the largest in the agencies history for their mishandling of user data, but this does not incorporate what is to come from the DOJ’s inquiry launched later in the month.

For the better part of 2019 I have been reasonably constructive on shares of FB, largely for the reason that the DOJ is looking into what they perceive to be unfair market strength. Despite all of the negative headlines regarding the company, users and advertisers have not left the platform. While earnings growth has decelerated massively (expected to be about 1% adjusted) this is largely the result of the company’s spend to better secure user data. This came as quite a shock to investors, thus the initial plunge last July on the initial guidance cut, but revenue growth, while decelerating is also quite astonishing, expected to rise 26% in 2019 to a whopping $70 billion. Wall Street analysts remain overwhelmingly positive on the stock with 46 Buy ratings, 6 Holds and only 2 Sells.

But a video that went viral this week of actor/comedian Bill Hader from an interview with David Letterman from 2008 freaked out a lot of people, showing him morph into fellow actor Tom Cruise, watch below:

This “deepfake” technology will make the malevolent activity by bad actors that Facebook was either unable or unwilling to combat on their platform during the 2016 election look like a walk in the park. It is easy to see how deepfake videos could spread like wildfire on a platform like Facebook with 2.4 billion monthly active users, inciting political upheaval, influencing elections, moving financial markets etc etc… you get the point, this tech is a game-changer for those with bad intentions. Governments around the world will soon require platforms like Facebook to police this activity and their ability to do so could result in additional expenses weighing on margins and their effectiveness at guarding against the worst-case scenarios will determine whether or not users and advertisers stay or leave.

I have no idea how this plays out, and this might be the first pitch of the first inning, but when you see a video like that it should scare the shit out of you what that tech could do in the wrong hands with those with the wrong motives. I suspect there is no real imminent threat, but just as our citizens have become immune to what we hear from the daily hurricane of lies from the White House, we are likely to start questioning what we see in videos of our leaders. Facebook will be the frontline on this fight and if recent history is any guide, they will likely be challenged to offer necessary protections of their 2.4 billion users…

Gains of the stock up to $199.50 (200 call strike less 50 cents premium paid) between now and Oct expiration, profits capped above $200. On or before Oct expiration investor could always cover the short call strike if the stock is at or above 200 to keep the long position intact.

Losses of the stock down to the 160 long put strike (plus the 50 cents premium paid). Protected below 160.

Rationale: an investor would do this if they did not want to sell their long position and are more worried about extreme downside near term then they are about extreme upside. Most importantly willing to suffer losses down to 160 and have gains capped at 199.50 between now and Oct expiration.