Shares of CSCO are up 21% on the year, basically in-line with the ytd gains of the Nasdaq Composite, down about 10% from the recent highs in July, and testing the high-end of the $52-50 technical support level that has been in place since February: 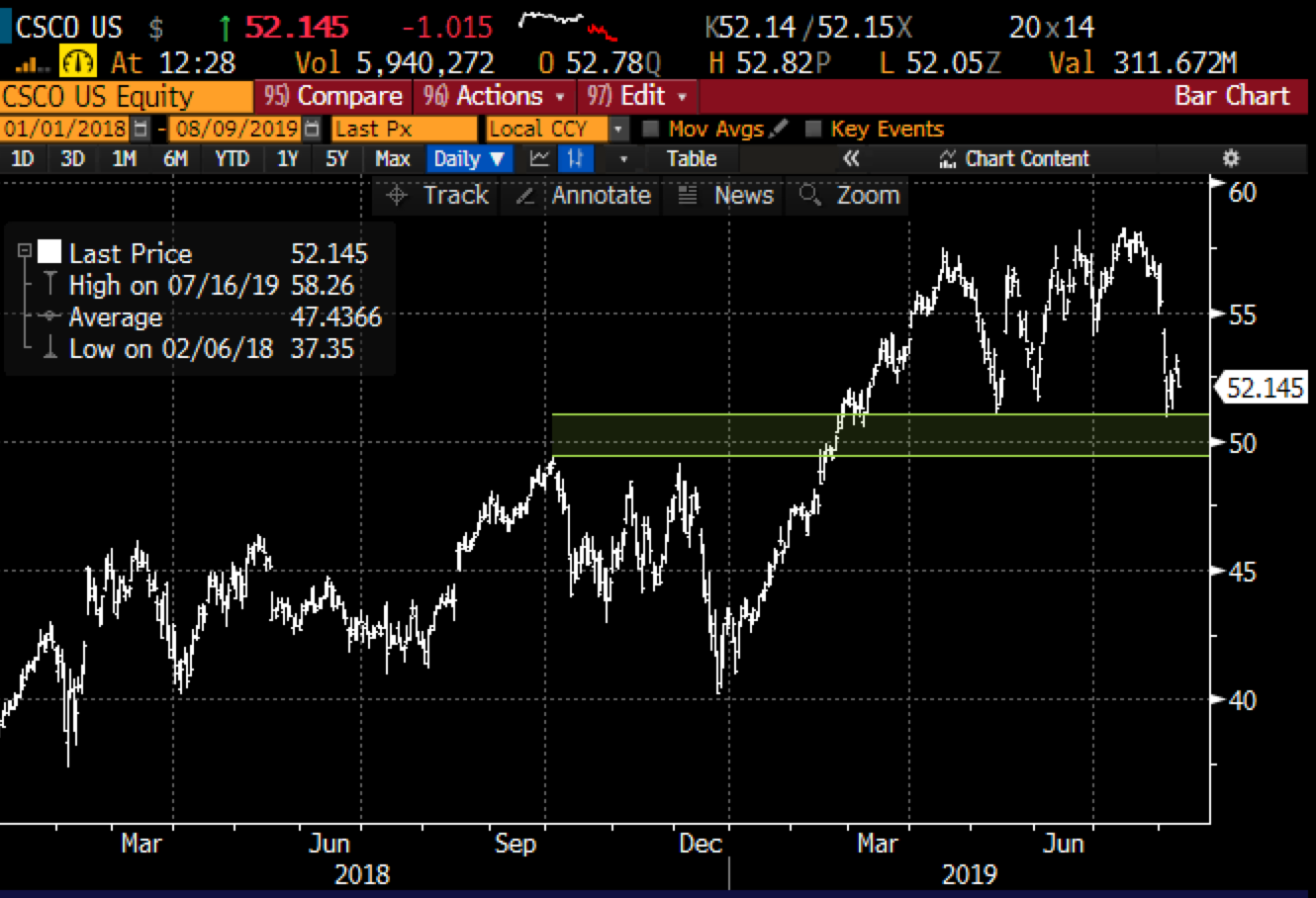 Prior to the recent sell-off, shares of CSCO had made a series of higher highs since April, the most recent coming in mid-July, which marked a 19-year high: 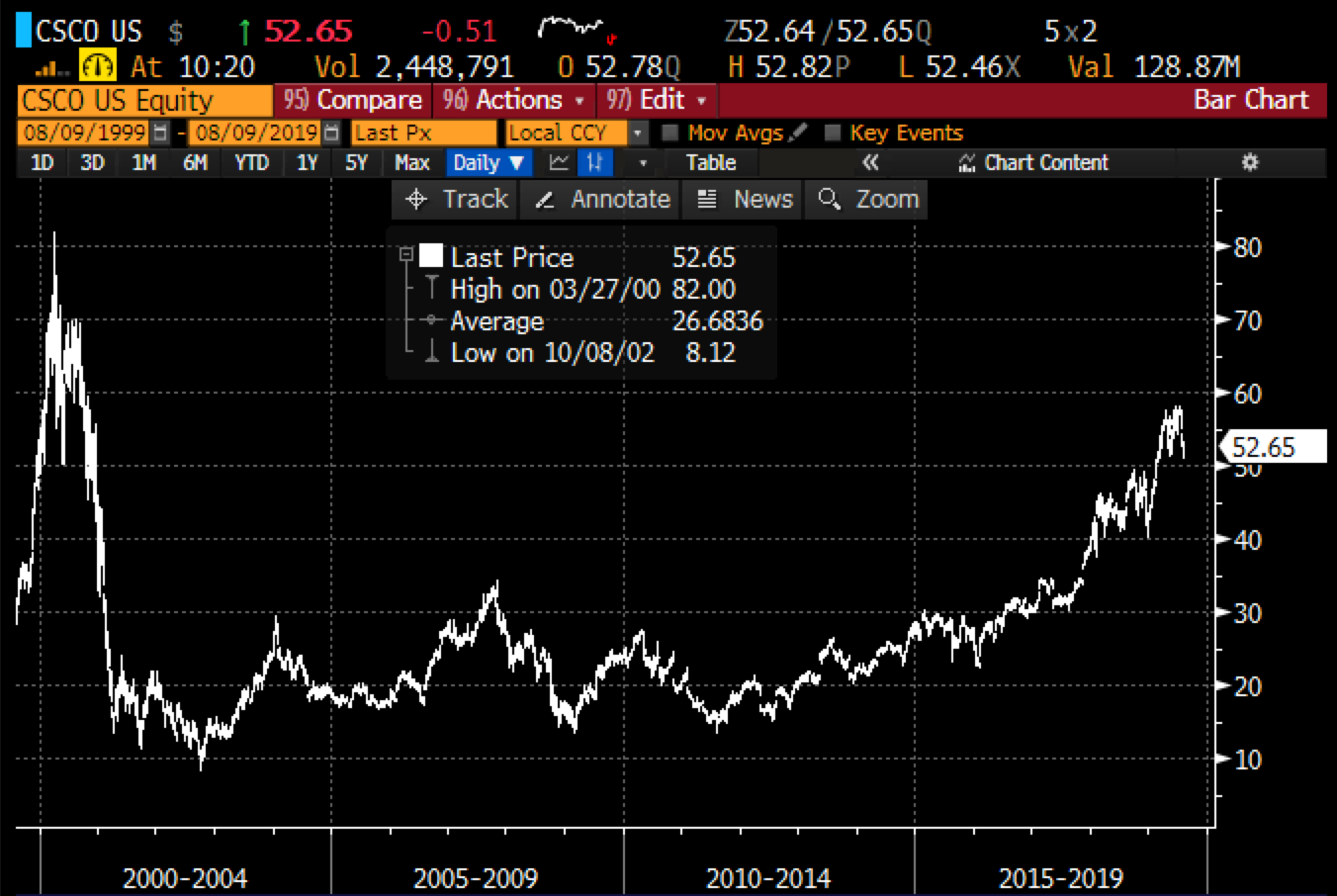 CSCO is a company that you would be in the cross-hairs of some of the macro-factors that are threatening economic conditions around the globe. First and foremost, the trade war with China which is not limited to merely global growth concerns that might affect demand for networking products, but also CSCO’s competition with Chinese telecom equipment behemoth Huawei which has emerged to be an important piece of the trade puzzle. There is a lot to unpack here… and proponents of the U.S.’s hard stance on trade towards China comes from both sides of the aisle, while there is much disagreement as far as the methods and the end goals of tariffs there is little disagreement on the administration’s view towards Hauwei and the future implications of global technology for decades. Here is a good summary of what exactly is at stake from John Markman who is a Forbes Contributor back in May describing Hauwei’s early lead in 5G equipment and their close ties to the Chinese government:

5G is about the future of connected things. Higher-capacity networks with lower latency — the time it takes between initiating an action and it actually happening — will open up all sorts of new technologies.

Connected and self-driving cars, remote robotic surgery, smart cites and factories are only the beginning of what is possible.

The company that wins the 5G race is going to reap untold riches.

The Trump administration wants to make sure Huawei is not even in the running.

The directive from the Commerce Department effectively bans the sale of semiconductors from U.S. firms. This kneecaps Huawei in the worst possible way.

There is no easy way for the company to build 5G products without that intellectual property.

Huawei depends on Qualcomm to make its smartphones. Building out 5G infrastructure will be impossible without the field gate programmable array FGPA intellectual property that Xilinx and Intel are developing.

The Commerce Department claims the ban is a matter of national security. It points to longstanding concerns Huawei is merely a front for the Chinese government. Making the company ground zero for 5G, therefore, is tantamount to building-in a spy network.

While the daily headlines focus on the trade war and tariffs, many would argue that we are in a sort of cold war as it relates to emerging technologies, causing the trump admin to…

blacklist Huawei in May for national security concerns, preventing it from buying U.S. chips. But Trump last month agreed to give “timely licensing decisions” to allow a slew of tech companies including Google and Broadcom to sell to the Chinese telecom giant.

Like the tariff’s it appears that the pressure the trump admin is putting on Hauwei is just a negotiating piece for a broader trade deal, today trump doubling down on Hauwei, for now…

In the meantime though, U.S. competitor CSCO might benefit from the ban on U.S. companies purchasing equipment from Huawei, and possibly even more importantly the companies move to shift their supply chain from China to avoid tariffs might have already started to pay off if you were to listen to CEO Chuck Robbins and CFO Kelly Kramer in an interview with CNBC’s Jim Cramer following their fiscal Q3 results in mid-May:

Cisco Chairman and CEO Chuck Robbins, sitting next to Kramer, said the company was prepared for last week’s tariff hike to 25% from 10% on $200 billion worth of Chinese goods, making the increase “relatively immaterial at this point and built in to our guidance.”

Robbins to MarketWatch the same day described how the company that gets less than 5% of its sales from China is wethering the tariff and trade war storm:

“We actually have executed completely on everything that we need to do to deal with the tariffs,” Cisco Systems Inc. Chief Executive Chuck Robbins said Wednesday.

Cisco Systems Inc. is using pricing adjustments and working closely with component suppliers to avoid negative effects from a trade conflict between China and the U.S., and the results are strong so far.

IAfter Chief Executive Chuck Robbins openly espoused concern last quarter about tariffs on many goods from China increasing to 25%, which has recently happened, he was asked in a conference call if that affected Cisco’s CSCO, -1.88% guidance.

“When we saw the indication that the tariffs were going to move to 25% on Friday morning, the teams kicked in and we actually have executed completely on everything that we need to do to deal with the tariffs,” Robbins said. “We are operationally… all that we needed to do is now behind us, and we see very minimal impact at this point based on all the great work the teams have done, and it is absolutely baked into our guide going forward.”

But in the Cramer interview they were both clear that their guidance does not incorporate future tariffs:

So the takeaway here is the threat of an additional 10% tariff trump last week threatened to put in place on Sept 1 is NOT in their forward guidance and might be a decent excuse for the company to offer a conservative Q1 outlook.

So its a fairly complicated case, and for the better part of the last year where global growth and the building adverse effects of a protracted trade war have weighed on growth prospects for many multi-nationals like CSCO, the company has executed well and the stock has held up nicely.

What’s my take into the print? I suspect that the company might be in a fortunate situation that any slowing demand might be off-set by the attractiveness of their products that don’t have tariffs and by market share gains at the expense of Hauwei. Given how vocal management has been about their execution relative to these known headwinds, But given the prospect of new tariffs on Sept 1 (and the threat of those going to 25% soon) is NOT in the company’s guidance.

A miss and a guide down that is blamed on trade and the stock is easily down inline with the implied move, depending on the magnitude of the miss probably 10%.

If the company puts up an inline quarter and guidance, or a slight beat stock up back towards $55 in a stable market.

A beat and raise after the stock’s 10% decline in the last few weeks and the stock is likely up 10% back towards the July highs.

Short-dated options prices are elevated as one might be expected into the print with 30-day at the money implied volatility very near the highs of 2019 at 32%. 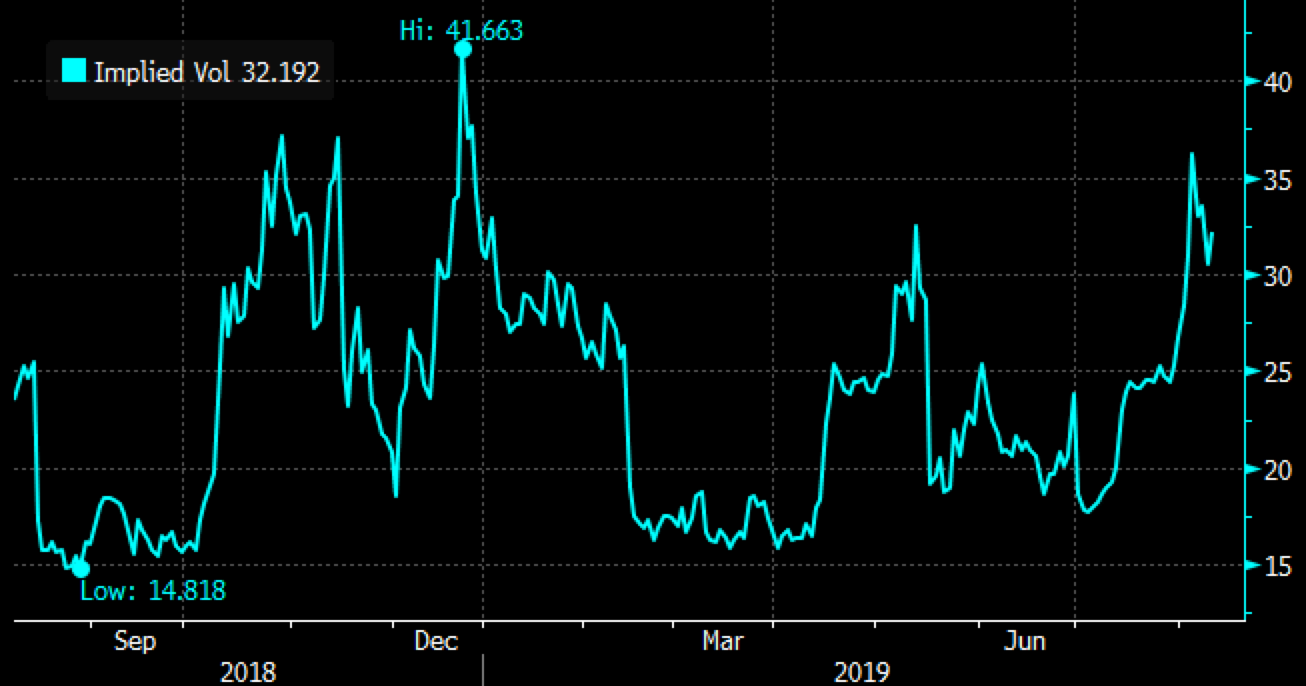 So what’s the trade? I suspect the company’s results and outlook next week place the stock post results somewhere inline with the implied move. If the guidance reflects conservative guidance, and then the additional tariffs don’t go into effect on Sept 1, then this could set up as an interesting options trade… Call Calendars look interesting, selling short-dated out of the money calls to help finance longer-dated out of the money calls of the same strike, The ideal scenario is that the stock remains rangebound, but then trump does not follow through with the Sept 1 tariff and stocks like CSCO pop…

This trade performs best with a gradual move towards the 55 strike over the next week into Aug 16th expiration. If the stock is below 55 on next Friday’s close the short 55 call will expire worthless and the trade will be left naked long the Sept 55 call. If the stock is close to 55 then the Sept 55 call will have appreciated as it will have picked up deltas. At that point it might make sense to further reduce the premium at risk by selling a higher strike call in Sept turning the trade into a vertical call spread. The max risk f this trade is the 65 cents in premium paid, and would be at risk with a large move below the current level, or well above the 55 strike.

Rationale: this trade idea risks a little more than 1% of the stock price while offering a way to leg into out of the money calls into what might be the next real catalyst for the stock.