Today after the close UBER will report their second-quarter as a publicly-traded company. The options market is implying about a 10% one day move tomorrow. When the company reported their Q1 results on May 30th, only three weeks after their IPO, the stock was already down 11% from its $45 IPO price and had very small post-earnings move as the results had not differed much from the guidance given on the IPO roadshow the prior month…

The stock has spent very little time above the IPO price and has been stuck in a range between $36 and $47 with an average price near $43 for the period: 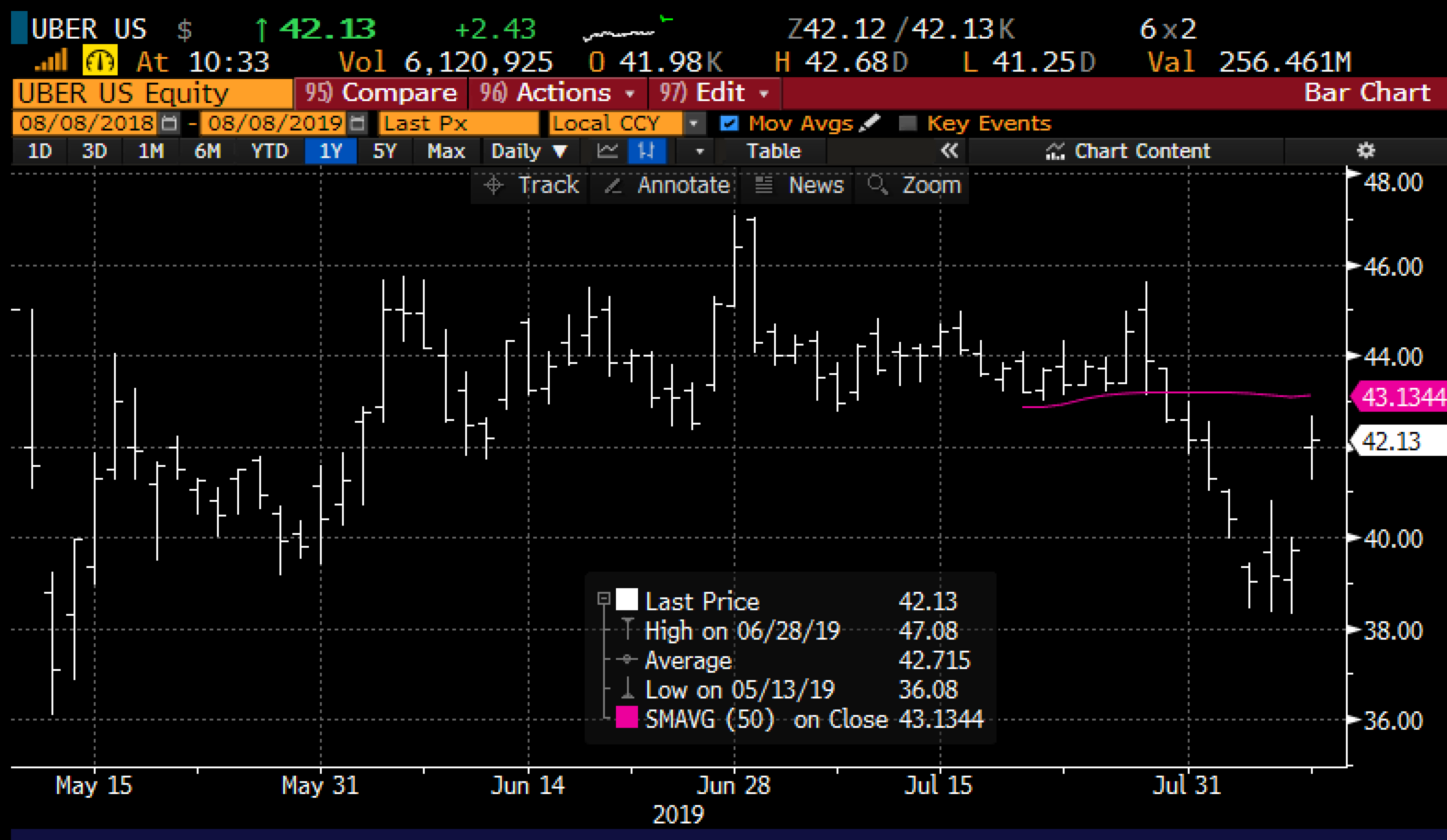 Shares of UBER are up 7% today as I write in sympathy with a strong beat and raise by competitor LYFT last night, per Barron’s:

For the quarter, Lyft (ticker: LYFT) posted revenue of $867 million, up 72% year over year, well above previous guidance of $800 million to $810 million. The company had an adjusted Ebitda loss of $204.1 million, narrower than the $270 million or $280 million loss Lyft had projected. The company reported 21.9 million active rides in the quarter, up 41%, while average revenue per rider was $39.77, up 22%. Both measures were ahead of Street expectations.

Analysts and investors alike are clearly extrapolating a more rational competitive pricing environment to the larger of the two rideshare competitor UBER.

RBC Capital’s star Internet Analyst Mark Mahaney who rates the stock a Buy with a 12-month price target of $62 highlights the following data points and expectations for the quarter in a note to clients earlier in the week: 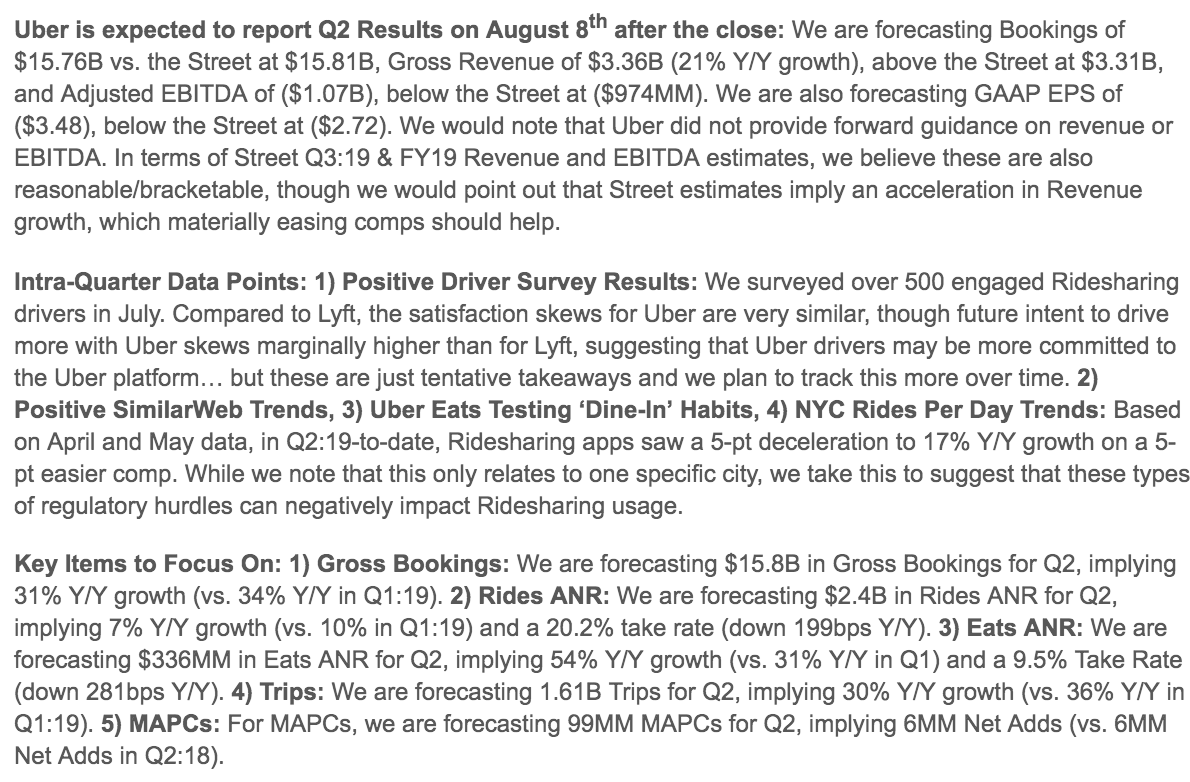 My Take into the Print: LYFT was initially trading up 10% on the beat and raise in the aftermarket last night before headlines hit that the company would accelerate their IPO lockup from Sept 25th to Aug 19th. The stock gave back all of the gains and actually traded down. The stock is now up 4% in regular trading as I write as investors likely think that with the stock still well below the IPO price of $72 that insiders might let the stock breathe a bit and let the better than expected results dictate near term trading. That being said much of the locked-up shares have far lower prices than the $72 IPO price.

I suspect that UBER initial tranche of 180-day locked-up shares would have a much harder time accelerating this quickly and I would not expect anything similar given the IPO was about three months ago.

Much like LYFT yesterday, short-dated options (implied volatility, blue line below) in UBER price are very elevated into the print this evening, especially related to realized vol (white line below, how much the stock is moving), setting up for good opportunities to sell options vs long stock, like yesterday in LYFT to add potential yield, but also the potential as I will describe below to possibly add leverage to an existing long…

So what’s the trade? If I were long UBER stock and thought the company could also put up and a beat and raise and the stock might create a new range above the IPO price of $45 I might consider buying a 1×2 call spread against my long stock which could add significant leverage on a breakout, for instance…

Profits of the stock up to $50, the stock is called away at that level because of the overwrite of the shares with the sale of one of the 50 calls, but if the stock is $50 or higher you have also added a $4.40 gain from the 45-50 call spread ($5 width fo the call spread less the 60 cents premium paid), so your effective call-away (sale level) is $54.40, up nearly 30% from the current trading level/

Losses of the stock below current levels, plus the 60 cents premium paid for the 1×2 call spread.

Rationale: this strategy makes sense if you think the stock could rally above $45 in the next 5 weeks and importantly if you were willing to sell the stock above $50.

If I were looking to make a bullish bet for a beat and raise and the stock would breakout above $45 and establish a new range above $45 in the coming days/weeks I might merely buy the call spread detailed above one up, the Sept 45-50 calls spread for $1.30, break-even at $46.30 with max gain of $3.70 if the stock were $50 or higher on Sept expiration.

If I were long and looking to hedge near term into the print I might consider a collar, selling an out of the money call and using the proceeds to buy and out of the money put. This strategy allows for upside in the stock up to the short call strike, losses in the stock down to the long put strike, but protected below. For Instance

Profits of the stock up to $45, stock called away at $45, but the investor could always cover the short 45 call for a loss to keep the long position intact.

Losses of the stock down to 40, but protected below.

Rationale: this sort of hedge makes sense for an investor that is willing to give up some potential upside for defined risk to the downside.