Today after the close LYFT will report their second quarterly results as a publicly-traded company. The options market is implying about a 10% one day move tomorrow which is essentially inline with the one-day decline following their last earnings report in early May. With the stock at $60.20, the Aug 9th 60 weekly straddle (the call premium + the put premium) is offered at about $6.50, or about 10.50% of the stock price, if you bought that, and thus the implied move into the print, then you would need a rally above $66.50 or a decline below $53.50 to make money.

Shares of LYFT are trading down ~17% from its IPO price of $72 on March 28th, and down 33% from its brief first trading day high of $88, but has seemingly found some technical support for the last few months between $55 and $60 with the average price of the stock since it’s offering about $62: 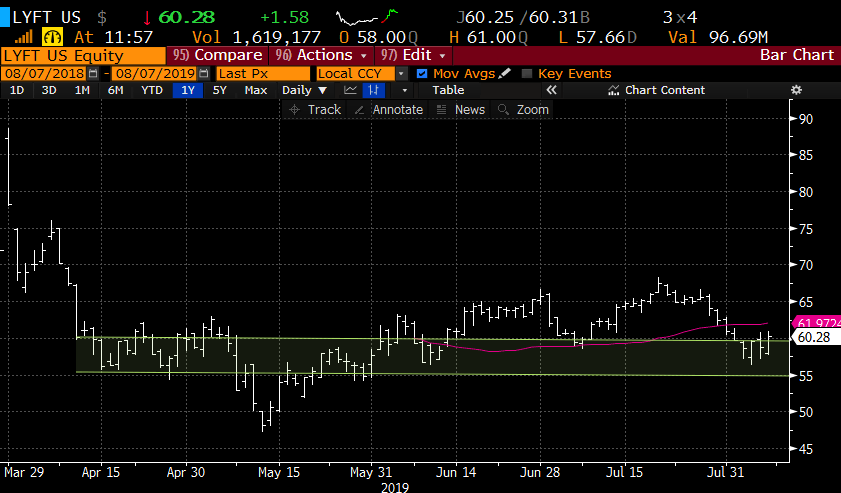 With just a little more than 4 months of trading history it doesn’t make too much sense to focus on the technicals, and the high implied move in the options market suggests that market makers have little to go on also as implied volatility (the price of options, blue line below) is quickly approaching levels, not since the early days of the stock’s existence when options were listed in April, despite being 2x realized volatility (how much the underlying is moving, white line below):

This divergence is notable because it highlights the relative calm in the stock, but the heightened fear of a large move post results which could amount to locked-up longs looking to hedge, or possibly the high short interest (over 50% of shares outstanding) looking to lever their bets or put in stops to the upside. Who knows but one thing is for certain, if the stock underperforms the implied move, options prices will plunge and likely stay down for the time being. This could set up nicely for long holders of the stock to add potential yield to their stock by selling out of the money calls, more on that below.

My Take Into the Print: expectations in 2019 have been for the company to grow sales about 5% sequentially each quarter for a total of $3.2 billion, but on that expected total, the company is expected to lose $2.6 billion in GAAP net income. Wall Street analysts do not see GAAP profitability until at least 2024 and only profitable on an adjusted basis in 2023. To state the obvious, the jury is still out on this business model and the company dating back to their IPO roadshow have offered no assurances the company will ever be profitable.

Near term could there be a short squeeze on lower than expected losses, better than expected active riders and revenue per active riders. Sure, but I suspect decelerating growth in these last two areas would not be taken lightly by holders in front of what might be a deluge of stock coming off of lockup in late September by insiders. The company sold 32.5 million shares on their IPO, but there are 273 million shares outstanding, presumably, much of those shares will remain locked up for longer than 180 days, which is customary for the first tranche and many locked-up holders might have already hedge (see large short interest) or might not think prudent to sell below the IPO price.

I would add that the choice of the $70 strike plus the $2.60 in premium gets you back just above the late March IPO price which should see a great deal of overhead resistance and likely sellers at the lockup expiration on Sept 25th.

One last point, if the stock were above $70 on or before Oct expiration the long holder of stock could always cover the short call and not risk being called away and keep the long stock position intact.