Disney (DIS) will report their fiscal Q3 earnings today after the close. The options market is implying about a 4.5% move in either direction tomorrow which is rich to its average one-day post-earnings move over the last four quarters of about 1.6%. With the stock at $139 the Aug 9th weekly 139 straddle (the call premium + the put premium) is offered at $6.50 if you bought that, and thus the implied weekly movement, you would need a rally above $145.50, or a decline below $132.50 to make money.

Disney’s stock has not had big movements after results of late, with the largest one day move in years coming the day following the April launch of their over the top service Disney Plus breaking the stock out of a 4-year base that saw the stock massively underperform the broad market: 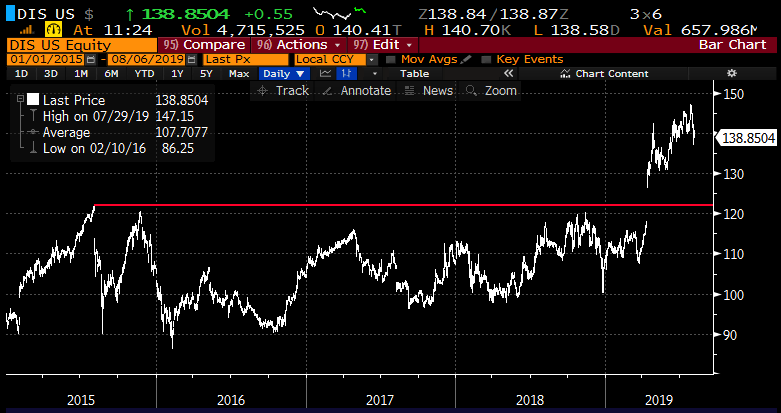 Since the 10% gap on April 12th to close at $130, the stock has held that level, which would make it significant near term technical support, but below that there is an air pocket down to $116: 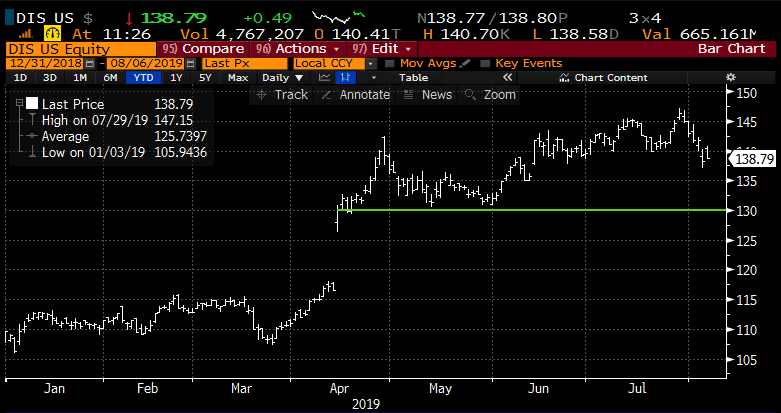 For those who are looking at Netflix’s (NFLX) 15% drop since they reported Q2 earnings on July 17th which saw the company’s first net subscriber decline in North America in many years, and hope to extrapolate that this is to Disney’s advantage are likely a bit premature as DIS has not yet launched the service and much of their content is still on NFLX. It is worth noting that heading into their Q2 results, NFLX was testing for the third time what has proven to be formidable technical resistance at $385 and is now sitting on support from mid-January just above $300: 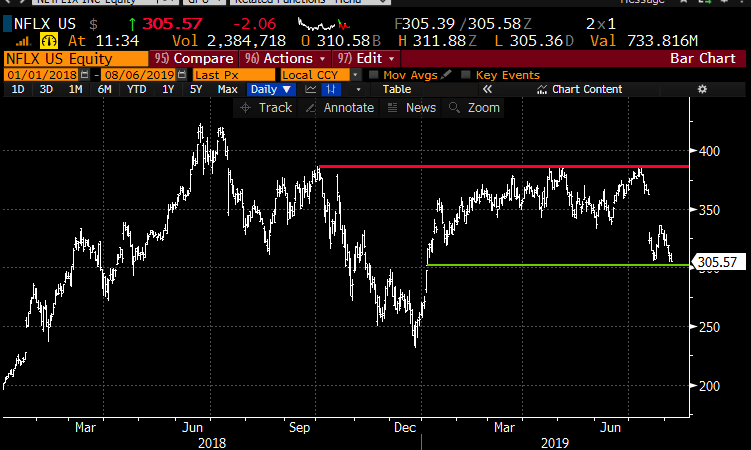 Wall Street analysts are overwhelmingly positive on the stock with 22 Buy ratings, 9 Holds and 1 Sell with an average 12-month price target of about $155 about 10% higher than where the stock is trading. DIS trades about 21x next years expected earnings which is rich to the market but still below peak P/E levels from 2015 prior to registering a multi-year decline in cable subs for their cash cow ESPN. Let’s say that valuation is fair, and might prove to be cheap if the company is able to demonstrate sub losses at the expense of comps like NFLX when the Disney + service goes live in November.

In the meantime, though the company’s updates on parks and studios will be a focus, and any incremental data about the ott offering to give investors and analyst confidence that the costs associated with the launch, and the loss of revenue from licensing od their content to other platforms will justify the April stock gap.

My Take Into the print? With DIS’s acquisition of Fox’s media having closed in March, investors will be hot to hear about progress on integration and plans for content. Investors have gotten used to the studio’s success at the box office with an unusually stellar string of hits in the quarter with Captain Marvel, Avengers End Game, the Lion King and Toy Story 4, with the final installment of the Star Wars saga due out in December.  If the company is able to tell a decent story into the Disney + launch with their other core businesses holding the line, I suspect the stock holds the $130 April gap level in a stable market. Investors who are long the stock or looking to get long are not buying it on past performance, but on future possibilities given the unique combination of assets (including control of streaming platform HULU that may prove to be the company’s secret weapon in the future as they expand into live broadcasting).

This trade performs best with a gradual move towards the 150 strike over the six weeks into Sept expiration. If the stock is below 150 Sept expiration the short 150 call will expire worthless and the trade will be left naked long the Nov 150 call. If the stock is close to 150 then theNov 150 call should have appreciated as it will have picked up deltas. At that point it might make sense to further reduce the premium at risk by selling a higher strike call in Nov turning the trade into a vertical call spread. The max risk f this trade is the $2 premium paid, and would be at risk with a large move below the current level, or well above the 150 strike.