Square (SQ) will report their Q2 results today after the close. The options market is implying about a 6.7% move in either direction which is essentially inline with the 7% average one-day post-earnings move over the last four quarters. With the stock just below $83, the Aug 2nd weekly 83 straddle (the call premium + the put premium) is offered at about $5.50, if you bought that, and thus the implied move between now and the close tomorrow, you would need a rally above $88.50 or a decline below $77.50 to make money.

Shares of Square are up 47.5% on the year, and up more than 60% from their 52-week lows made in late December, with the stock trading as I write at the highs of 2019, despite being down a little less than 20% from its all-time highs made in October of 2018. The stock is testing key technical resistance at $83, with decent near term support down near its 200-day moving average just above $70: 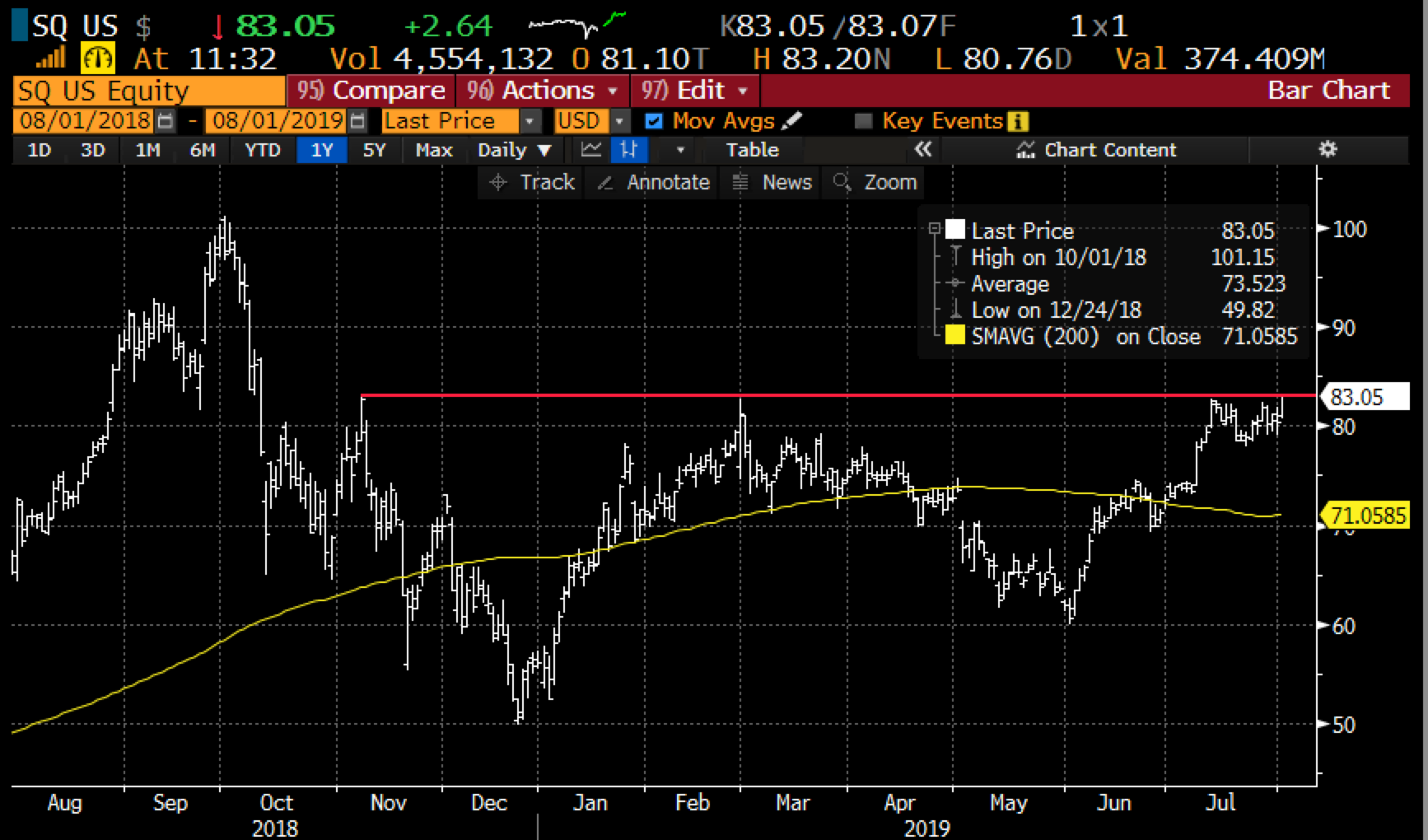 Last night on CNBC’s Fast Money I took a quick look at the trade set up into the print and highlighted the fact that the most active options on the day were the weekly 82.50 calls… this by no means that these calls were all bought to open as there were 3000 contracts of open interest in the strike, but notable from the standpoint that opening buyers of the strike are clearly targeting a breakout after the print, watch below:

Wall Street analysts remain fairly mixed on the stock with 186 Buy ratings, 17 Holds and 3 Sells, their trepidation largely rests on valuation, with the stock trading about 109x 2019 expected adjusted eps of 76 cents, and 15x expected 2019 sales of $2.28 billion, growing at 43% year over year. On a GAAP basis, eps swings to a small loss equivalent to an $18 million loss in net income.

My Take into the Print: I am going to reiterate what I said before last quarter…”I am hard-pressed to think that investors at this stage of the game are going to get hung up on valuation and the negative effect on margins from spending on new offerings and geographic expansion”. That said after last quarter the stock sold off 8% the day after earnings and continued a nearly 20% peak to trough decline from earnings into late May. Investor concern was largely around slowing revenue growth that was reflective in their Q2 guidance.

If you are inclined to think that the stock’s consolidation between $60 and $80 for the better part of 2019 is about to be resolved to the upside on better than expected results and guidance, and on its way back to its prior highs in the coming weeks, then consider a call spread in Sept expiration… for instance:

Rationale: this trade idea risks 4% of the stock price offering a break-even in nearly 7 weeks up 7% (in line with the implied move) with a potential payout of up 14%.

If you are inclined to think that decelerating revenue and margin growth could weigh on investor sentiment, and two consecutive guidance downgrades could cause the stock to re-test support on the downside then consider put spreads in Aug expiration:

Rationale: this trade idea risks 2.5% of the stock price with a break-even down 5.5% with a max profit potential of 10% if the stock is down 15% in a little more than 2 weeks.

***I’ll offer our normal disclaimer on long premium directional trades into events like earnings… you need to get a lot of things right to merely break-even, direction first and foremost, the magnitude of the move and of course timing. Buying at the money weekly options into events like earnings can be very Binary and should be used for those with high conviction when one is looking to define their risk, or hedge a long or short position, or possibly add leverage but be cognizant of risking what you are willing to lose.