On June 3rd when Tesla was trading at multi-year lows my Options Action co-panelist Carter Worth of Cornerstone Macro Research made a pretty epic call on a technical bounce from the $175 level, which happened to be a matched low from 2016:

Well, Carter absolutely nailed the long entry, and the stock’s bounce from those depths was followed a month later by better than expected Q2 deliveries announced on July 2nd: 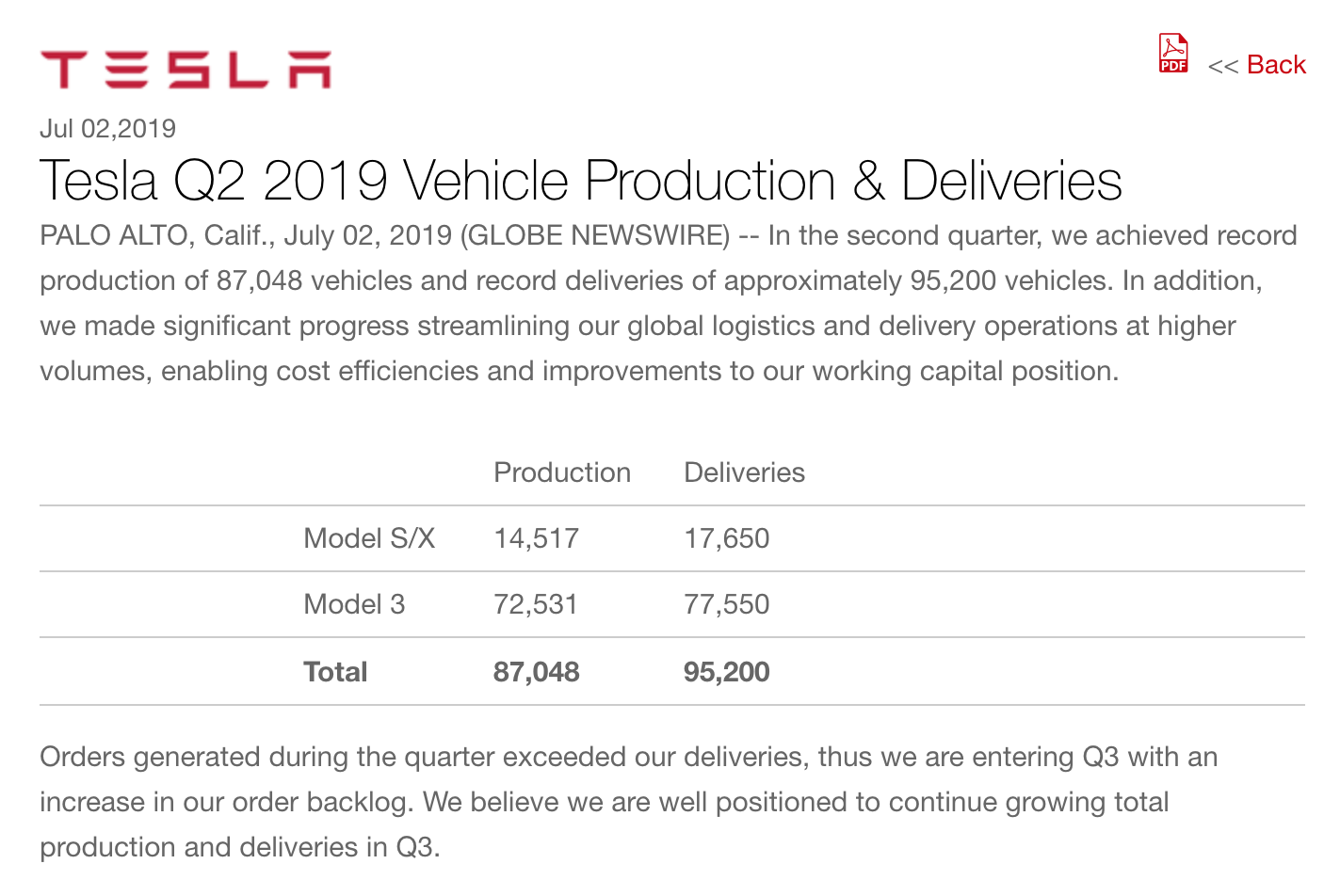 Despite deliveries actually coming at the mid-point of their prior guidance of 90,000 to 100,000 investors breathed a collective sigh of relief that Tesla CEO Musk did not once again overpromise and underdeliver. I think it is safe to say that the stock’s breakdown in May below $250 down to $175 was largely a result of bulls getting out of the way of weaker than expected deliveries the result of weak demand for the low-end Model 3.

Just as the stock overshot on the downside in May/June it appears to be overshooting, through prior support (now resistance) at $250: 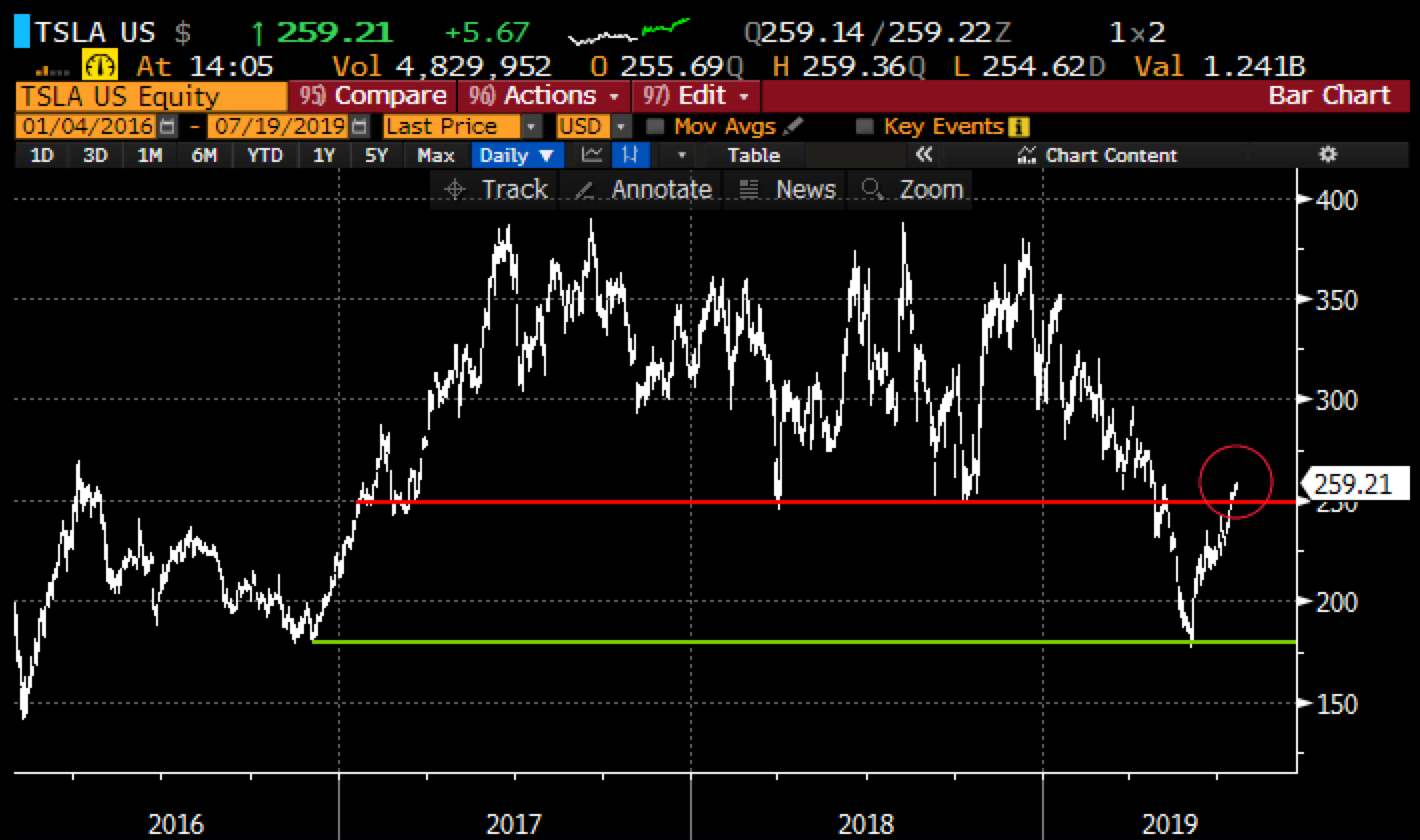 Next week though, when TSLA reports Q2 results on July 24th (amc) investors will be very keen to see whether or not Q2 marked a turning point in demand and whether they are able to reiterate their prior full-year delivery guidance of 360,000 – 400,000 cars which would mean the company would need to ship on average 104,000 cars for each of the next two quarters to hit the mid-point of that range seeing that year to date they have delivered only 172,000. One reason some analysts think that Q2 might have pulled forward demand is that the Federal tax credit for electric vehicles was cut in half on July 1 and will be eliminated by Jan 1, 2020. Analysts were also a bit surprised that the company did not update any financial guidance with the delivery news. Which is why Wednesday’s earnings release could serve to be a significant catalyst for the stock. If the company were to show they were able to deliver 72,500 Model 3’s with better than expected margins, while reiterating guidance, then the stock is likely on its way back to $300. But if the company had one of those far too familiar for Tesla “do whatever it takes” to get the cars out the door to hit delivery guidance, at the expense of profitability, then the stock is on its way back towards $200 in my opinion.

The options market is implying about a $20 move in either direction following Wednesday’s results, or about 7.6%. With the stock just below $260, the July 26th weekly 260 straddle (the call premium + the put premium) is offered at $20, if you bought that and thus the implied movement you would need either a rally above $280 or a decline below $240 to make money.  But if you wanted to make a defined risk at the money bullish or bearish bet in the weeklies it would cost you only $10, or about 3.8% of the stock price. Over the last four quarters, shares of TSLA have moved on average about 7.5% the day following results, which is below its long term average of about 9.4%.

If I were long the stock I might consider short term protection in the form of August put spreads. If I thought the company would possibly lower its full-year delivery guidance and show worse than expected guidance than you might consider a defined risk trade to play for a near-term pullback towards $200:

Rationale: this trade idea risks 3.5% of the stock price with a break-even down about 7% in line with the one day implied move for the stock following earnings next week.