Microsoft (MSFT) will report their fiscal Q4 results tonight after the close. The options market is implying only 3.5% tomorrow in either direction, which is nearly a tad rich to the four-quarter the average move of 3.2% but below the ten-year average one-day post-earnings move of 4.1%. With the stock near $135 the July 135 straddle (the call premium + the put premium) is offered at $4.80, if you bought that and thus the implied earnings movement you would need a rally above $139.80, or a decline below $130.20 to make money “buying the move”.

Shares of MSFT are up a whopping 33% on the year massively outperforming the S&P 500’s 19% ytd gains, and the Nasdaq Composite 23% ytd gains.

The one-year chart of the stock shows the very orderly rise in Q1and then the Q2 breakout to new all-time highs. Stating the obvious, that uptrend is a force to be reckoned with, with the stock rallying nearly 50% from its Dec lows to the recent highs. But the stock is not impervious to tests of the trend, selling-off nearly 10% from its post Q3 earnings gap till its early June low. Also, I’d be hardpressed to think when the last time the stock traded at such a massive gap to its 200-day moving average, currently about 15%: 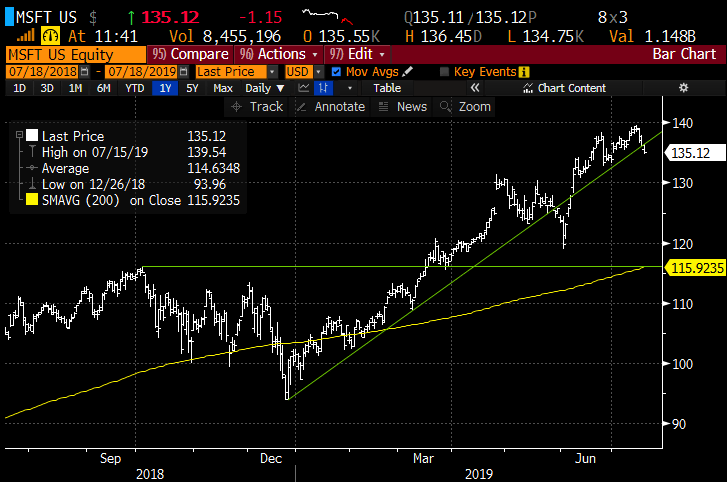 I would also add that its 200-day also lines up with the March breakout level of the stock to new all-time highs near $166 which would appear to be massive near-term support: 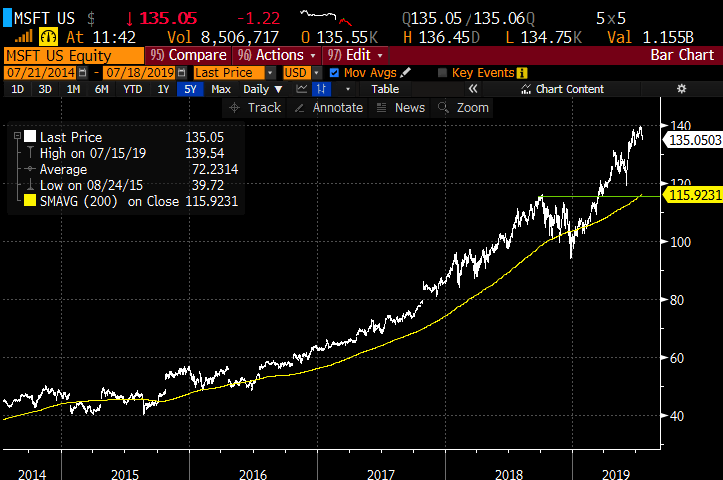 A few of weeks ago on June 25th I wrote a post on MSFT (The M in MAGA) and highlighted what I suspect is the unusually positive sentiment in a stock whose valuation is getting stretched by its historical standards: 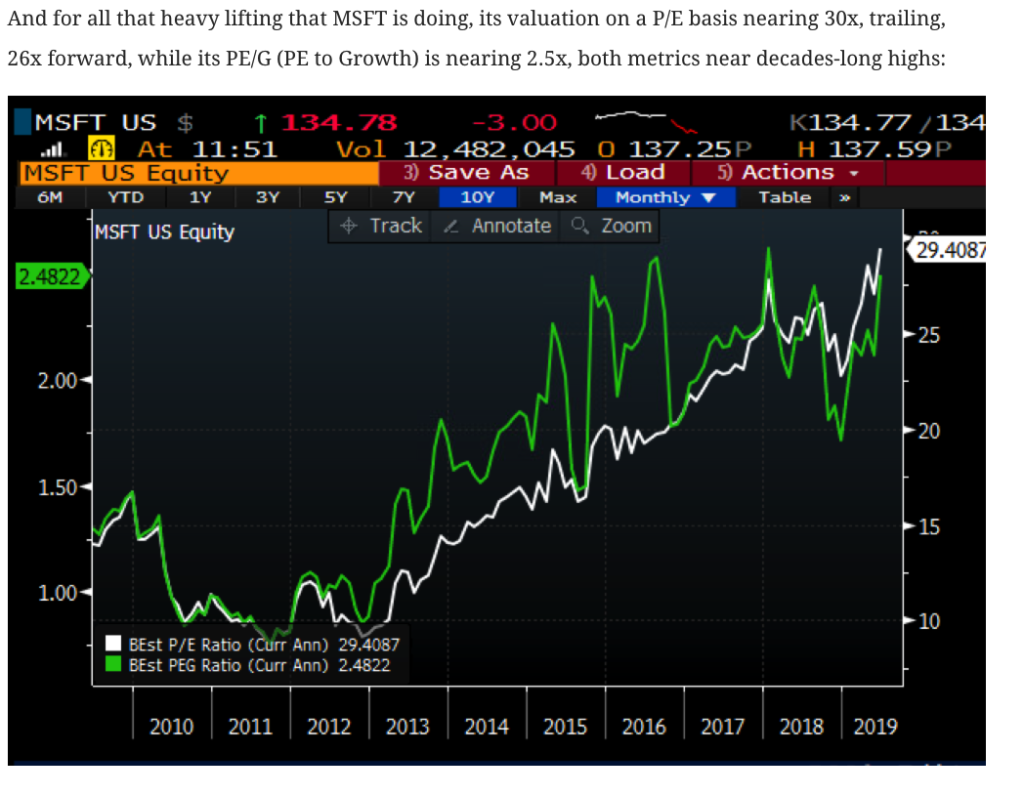 When I wrote that post the stock was $134.50, now trading up a tad since then, and down about 3% from its all-time highs made Monday. I’ll just reiterate my view from last month, the stock is priced to perfection despite PC shipment data in Q2 that showed a rarety, growth, which might have merely been the result of accelerated shipments prior to the potential of new tariffs.

With the implied move so low, and the stock and expectations so high, I am hardpressed to think that traders looking to make directional bets into and out of earnings this week that they not merely buy the at the money put or call for less than 2% of the stock price. If you are long and wanted to guard against an outside move the downside, risking 1.75% of the stock price to do so makes sense. If you think the company is going to beat and raise and make new highs, again, risking 1.75% to do that makes sense if you have a high conviction of an outsized move to the upside.

But if you are long and think the most likely outcome is that the stock is within a few percents of the current level, but don’t have a reason to sell, but like the idea of having some protection in the unlikely outcome of a miss and guide down, then consider collars, selling an out of the money call to finance the purchase of an out of the money put. This structure allows for some upside to the short call strike between now and expiration, while it also allows for loses of the stock down to the long put strike, the stock position is protected below the put strike from now until expiration. Again an investor would do this if they are more worried about extreme unexpected downside then extreme unexpected upside.

Here is what a collar would look like with stock at $135 for no premium outlay:

Profits of up to 3 between now and Friday’s close, stock called away at 138 or higher, but one could always cover the short call to keep the long intact if the stock is above 138 prior to the close on Friday.