Citibank (C) reported Q2 results this morning that were better than expected, per WSJ:

It was a bit of  mixed bag though:

The one-time gain in trading also flattered the bank’s earnings per share. Without it, the bank would have earned $1.83 per share.

Overall corporate and institutional banking revenue at Citigroup was flat for the quarter, at $9.72 billion. Investment banking revenue fell 10%, driven by a 36% drop in fee revenue from advising companies on mergers and acquisitions.

But the bank generated solid growth from its consumer unit. Global consumer banking revenue at Citigroup was up 3% to $8.51 billion.

For all that, shares of C are flat on the day as I write. The stock is up nearly 40% on the year, having just rallied 16% in what feels like a straight line since early June, and above the downtrend that has been in place since its post-financial crisis highs made in January 2018: 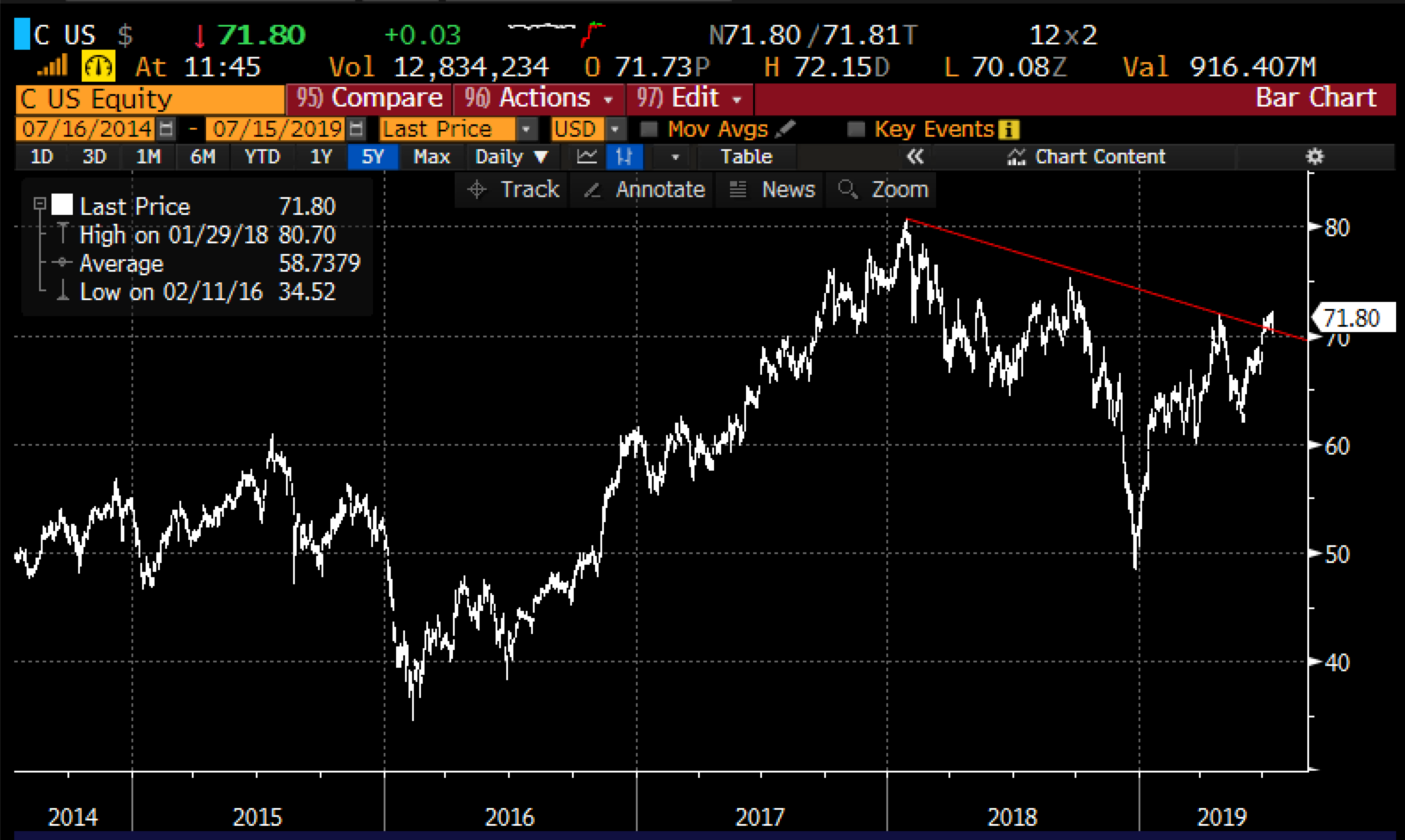 Tomorrow morning before the open we will get Q2 earnings from J.P. Morgan (JPM), Goldman Sachs (GS) and Wells Fargo (WFC), the three combined make up about 20% of the weight of the XLF, the S&P Financial Select etf. Wednesday morning we will get Bank of America (BAC), U.S. Bancorp (USB) and PNC’s Q2 earnings, bout 13% combined of the XLF. Thursday brings us earnings from Morgan Stanley (MS), BB&T (BBT) and Capital One (COF) with the week capped off with American Express (AXP) and Blackrock (BLK). In total, more than 50% of the weight of the XLF reports this week alone.

Like C, the XLF is threatening the downtrend from the Jan 2018 highs, but with a little less gusto imo: 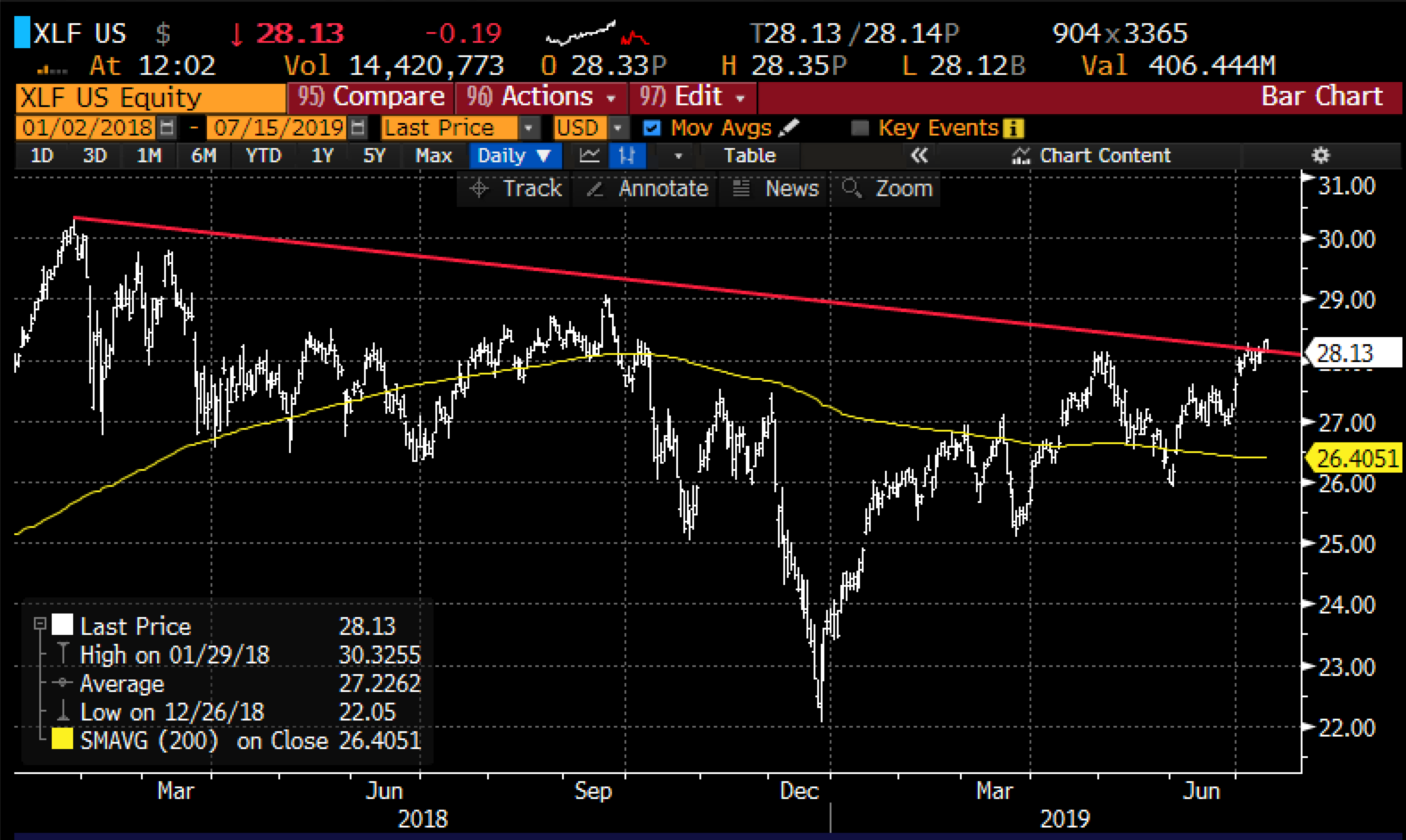 While it is worth noting that the XLF’s ytd gains have kept pace with the S&P 500 (SPX) it has shown poor relative performance at what is now three new highs since Jan 2018, failing to confirm the highs in the SPX. And its not just the mega-cap banks the KRE, the Regional Banking Index is down 20% from its 2018 highs, and in a massive downtrend, with a series of lower highs: 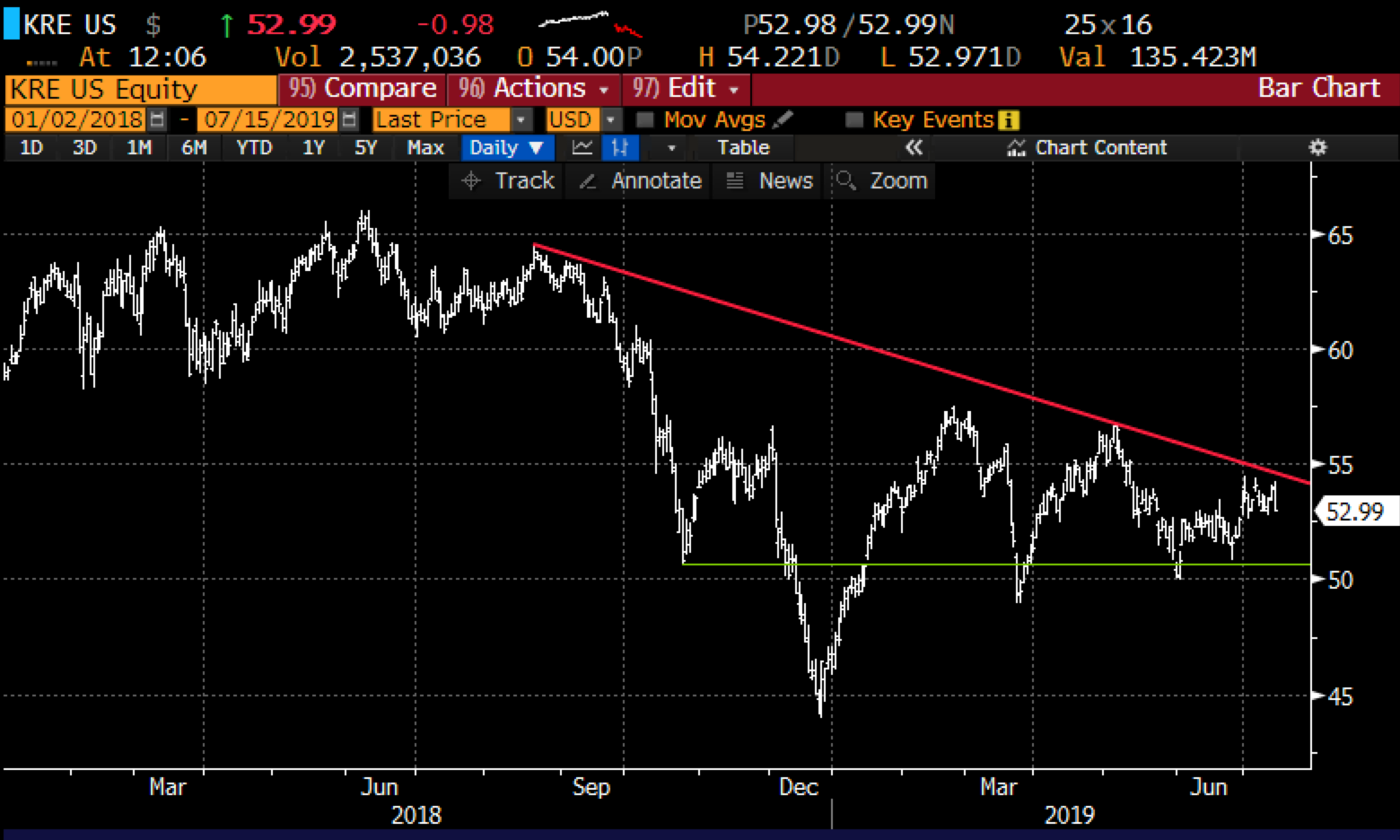 And then there is the small matter of European Banks, as measured by the SX7E, the Euro Stoxx Bank Index, which I suspect later this summer will be once again flirting with multi-year lows: 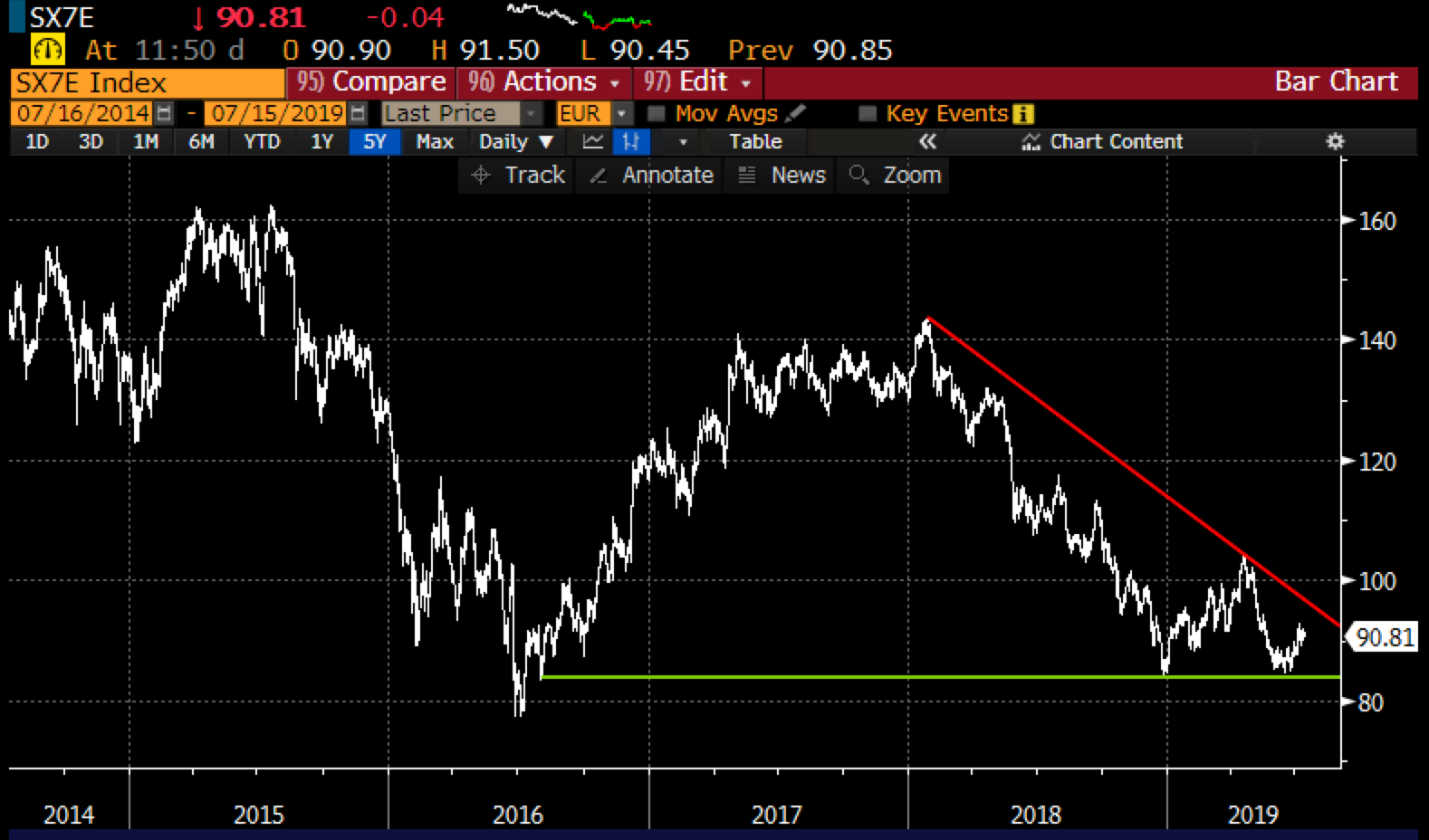 So back to mega-caps… clearly showing pretty healthy outperformance to small caps and most banks abroad… obviously in the decade since the financial crisis our banks, for the most part, have far less leverage than they once did, and management’s have gotten the memos… stay in your lane. One recent cause  though for the last month’s out-performance in mega-cap money center banks like JPM, BAC & C is the steepening of the yield curve (the spread between the 2 & 10yr US Treasury yield) nearing highs of the year on the strong likelihood of the Fed cutting Fed Funds by a quarter-point at their July 31st meeting, which would benefit these banks net interest margins, the spread between where they borrow and where they lend to customers: 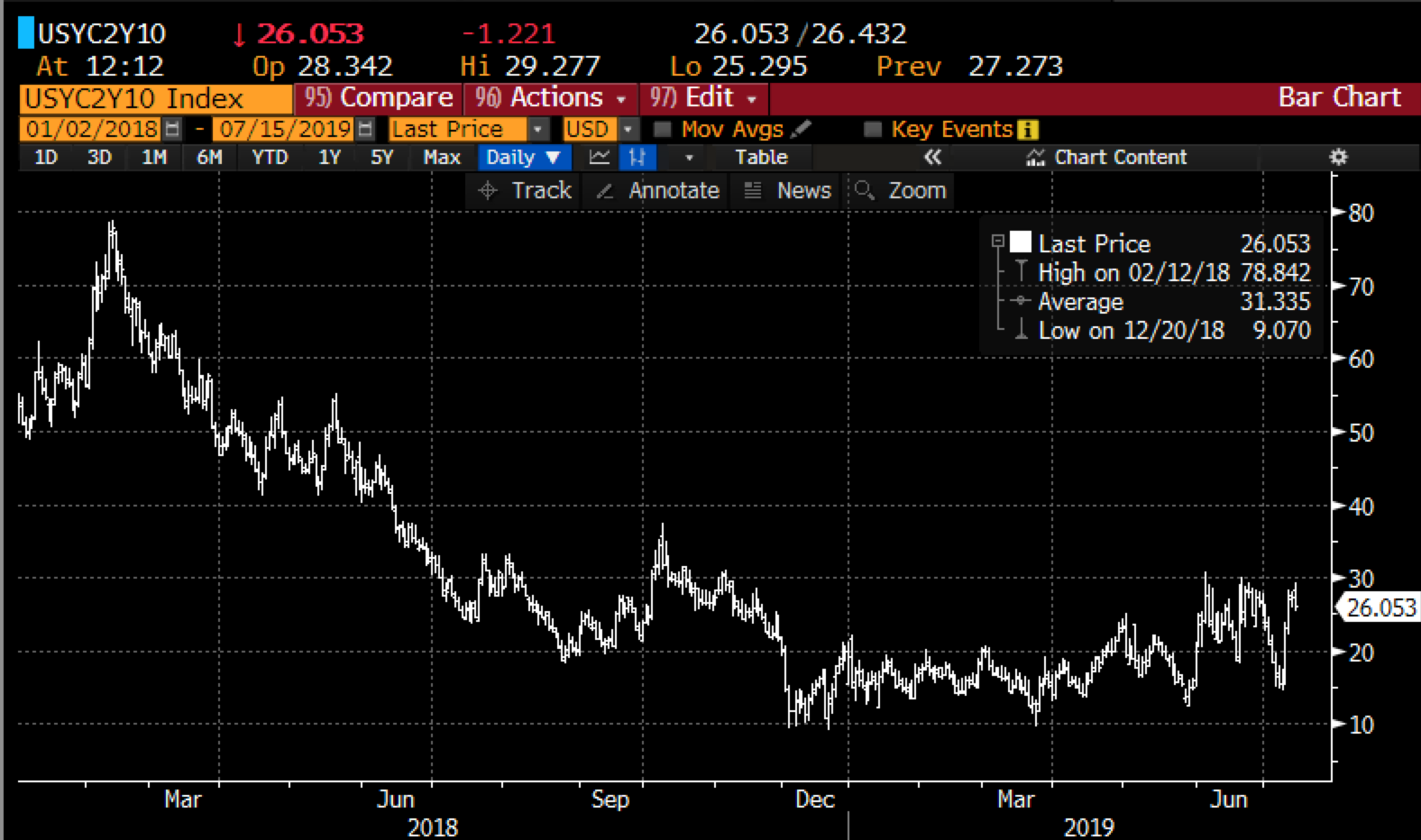 Your guess is as good as mine if in fact the Fed is “one in done” with what some are calling an “insurance” cut but I suspect the cut will not have the intended consequence as it is my view that the Fed has gotten bullied into the cut by trump and either we keep cutting cause things are getting worse quickly or the yield curve flattens again, either way not great for mega-caps imo.

Short-dated options prices in the XLF are unusually cheap, with 30-day at the money implied volatility at 15%, not far from the Jan highs, when they went ballistic, making long premium directional trades look attractive depending upon one’s directional inclination:

For instance, if you thought that better than expected earnings for most U.S. banks is “IN” the stock’s after the recent bounce and that the Fed’s dovish pivot resulting in a cut on July 31st is ls also “IN” the stocks, and that the trade fight with China will not be resolved this summer and that Euro banks strangling on trillions of debt with a negative yield and the potential for a nasty outcome with Deutsche Bank (DB), then it makes sense to replace long U.S. bank exposure with calls, or possibly make outright bearish bets with puts, looking to spread on the first turn lower.