On Monday, four days after Netflix (NFLX) released their third season of Stranger Things, the company announced on Twitter that initial viewership was breaking its own records: 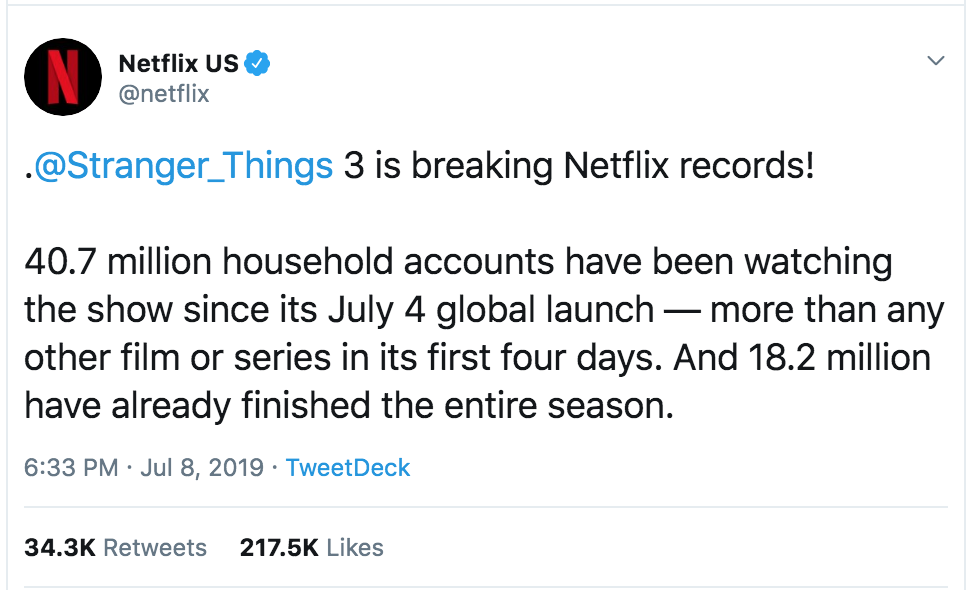 Despite what sounded like a pretty nice headline, shares of NFLX are poised to close towards the lows of the week, down 1.8% as I write, vs the Nasdaq up 80 bps and the SPX up 55 bps on the week: 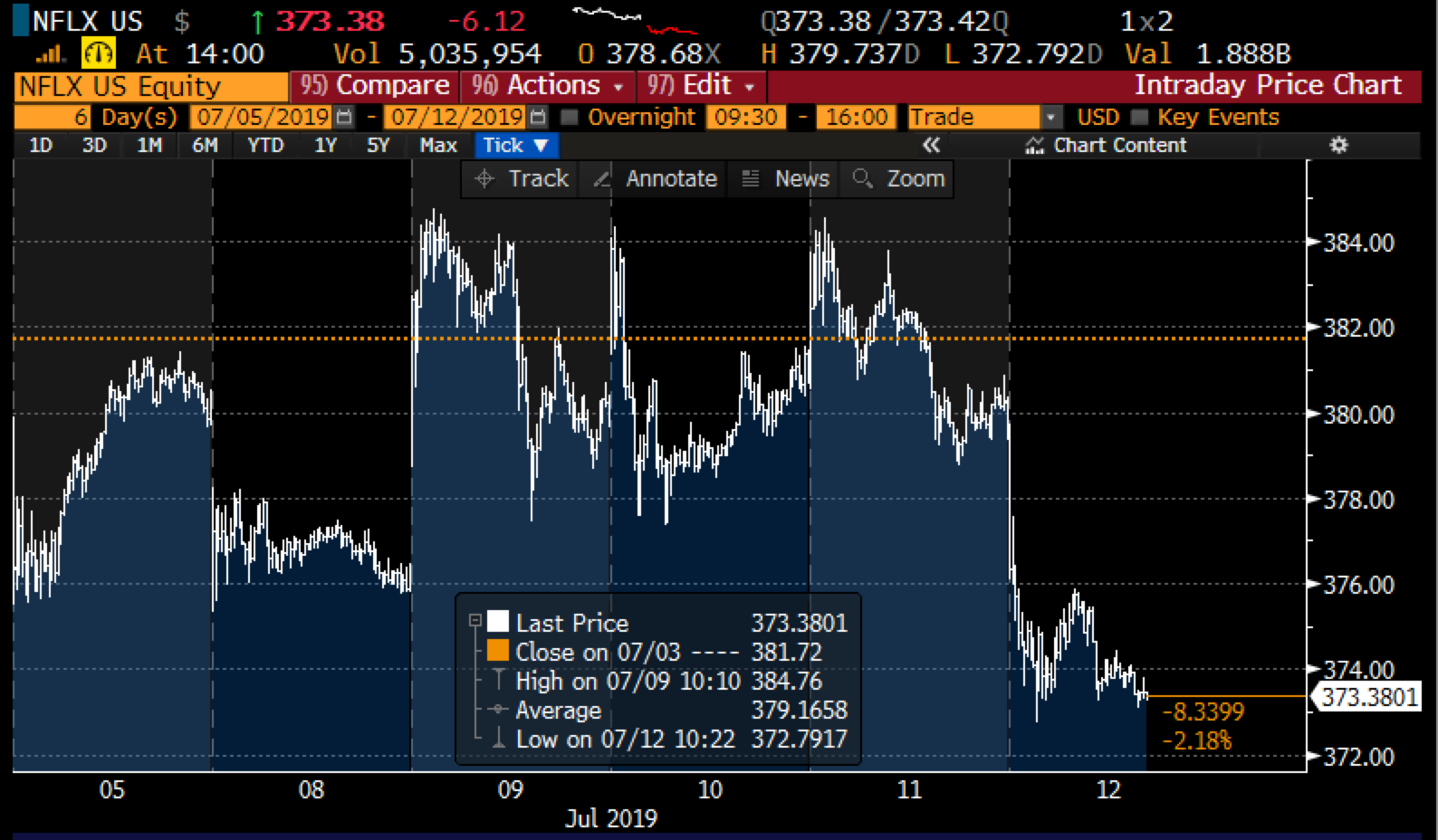 Shares of NFLX have had a heck of a year though, doubling the 20% YTD gains of the SPX, but interesting much of the initial gains came in the first month of the year and has been aided by the 10% rip since the start of June. The stock has been rangebound, to say the least between $335 and $385, finding support at its 200-day moving average, and resistance at its Oct 2018 high, a level that saw the stock drop 40% from into the Christmas Eve lows: 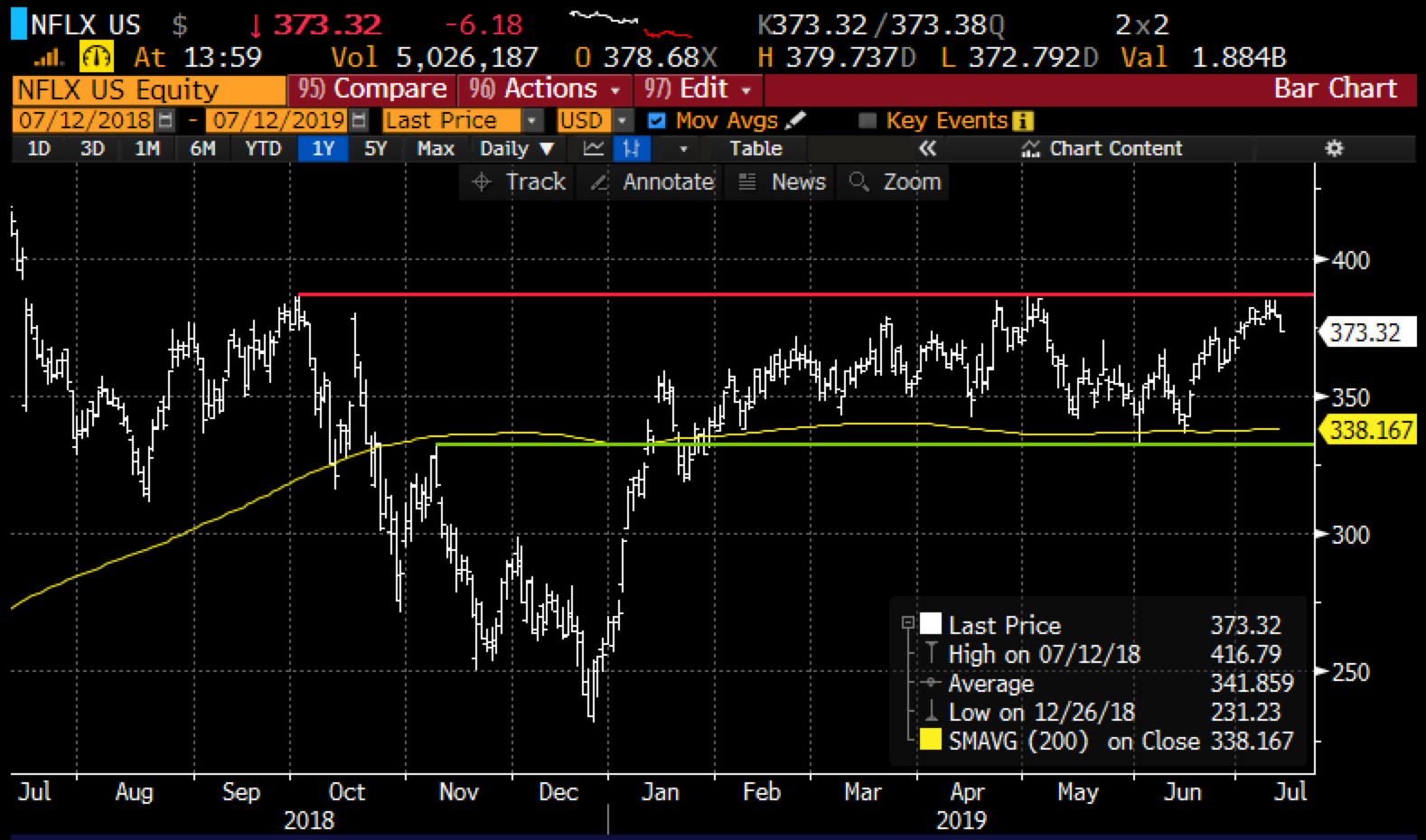 Next week on July 17th after the close the company will report their Q2 earnings. The options market is implying about a 6.5% or about $26 move between now and the close next Friday, which is rich to the 4% average one-day post-earnings move over the last four quarters, but well shy of the long term average of 12.5%!

What’s the Trade? I have a couple of different thoughts depending on one’s directional inclination:

The stock has been rangebound all Spring and Summer while Disney (DIS) seemingly makes new all-time highs every day since the well-received mid-April roll-out of their Over-The-Top service Disney Plus, 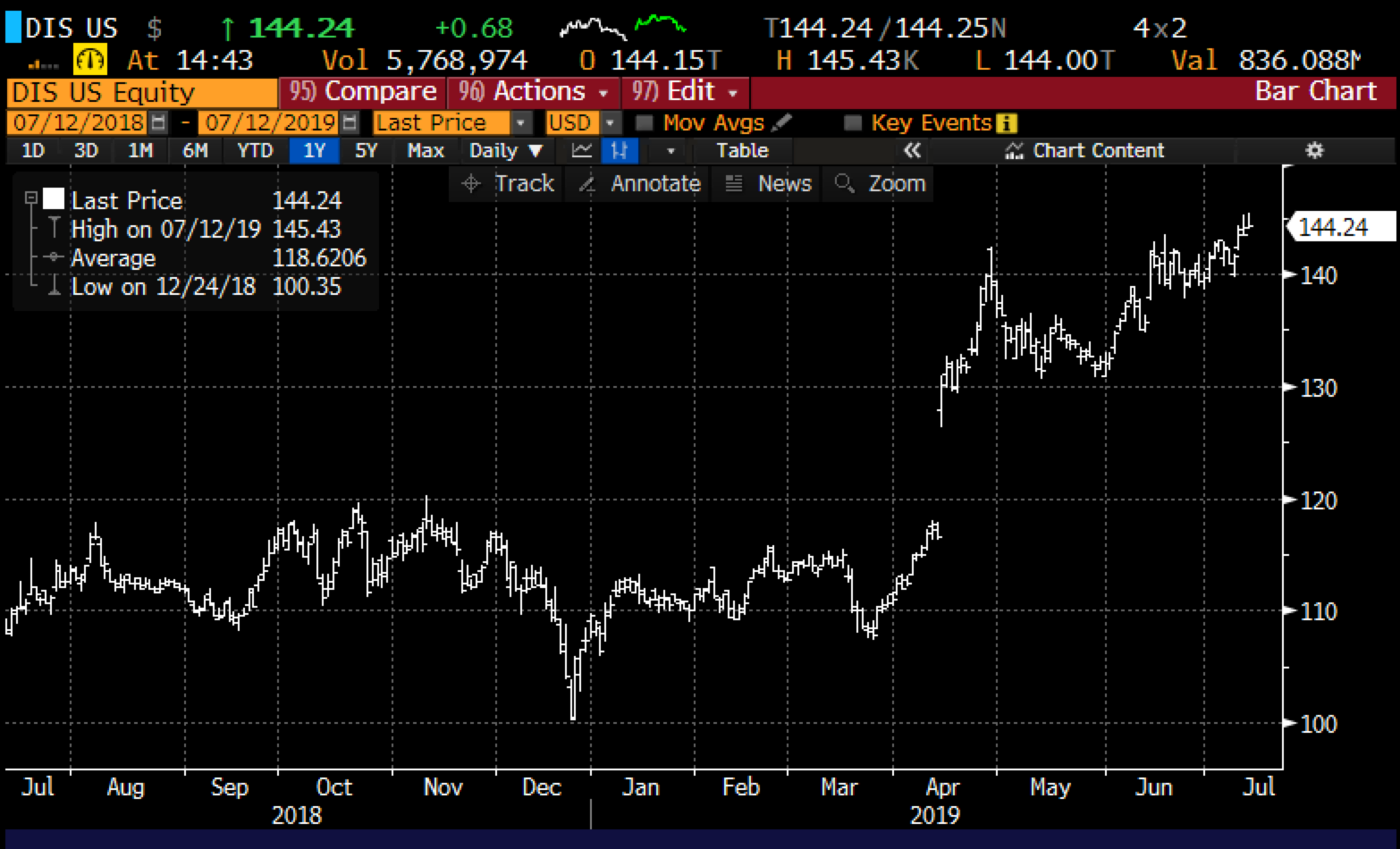 But despite the excitement about the offering and some long-term projections about subscriber growth and profitability targets, there is little to go on until Disney + is actually rolled out to get a sense of what the negative impact will be in incumbents like NFLX. I suspect NFLX management put through price increases earlier in the year because they felt comfortable about the original content slate that they have and will be rolling out in the second half of the year (Stranger Things: Season 3, Orange Is The New Black: Season 7, 13 Reasons Why: Season 3, The Irishman by Martin Scorsese).

My sense is that the stock’s recent gains towards the high end of the six-month range would take a fairly substantial beat and raise on the sub front to cause a meaningful breakout, and the most likely scenario is that the stock further consolidates.

If you are inclined to think that the stock trades in and around current levels after results, and once the market has more clarity on rates, trade etc that stocks like NFLX will confirm the highs in the broad market, then consider call calendars playing for a breakout in a couple of months, for instance:

Break-even on July expiration:
Best case scenario stock is in and around 400 (in line with the implied move) and the July 400 call is worthless or can be covered for a small amount and in this scenario, the Sept call that you are long has gained in value, Then you own Sept 400 call for just 2% of stock price and you can further reduce the cost of the out of the money call by selling a higher strike call in Sept to create a vertical call spread  Max risk is $8 or about 2% of the stock price.

But any disappointment on sub growth and the stock is likely on its way back to the low end of the six-month range near $335. Long holders might consider short-dated put spreads, or for those looking to make an outright bearish defined risk bet into the print consider put spreads in July expiration, for instance: