This morning shares of Goldman Sachs (GS) traded within a dime of its high for 2019, sporting a health gain of 24% on the year. On the surface that seems about right with the S&P 500 (SPX) trading this morning at a new all-time high, up 18% on the year, but it is worth noting that GS has been trading in a wide range between the mid 180s and its August 2018 break-down level just below $210, nearly 25% below its 52-week and all-time highs made in Q1 2018: 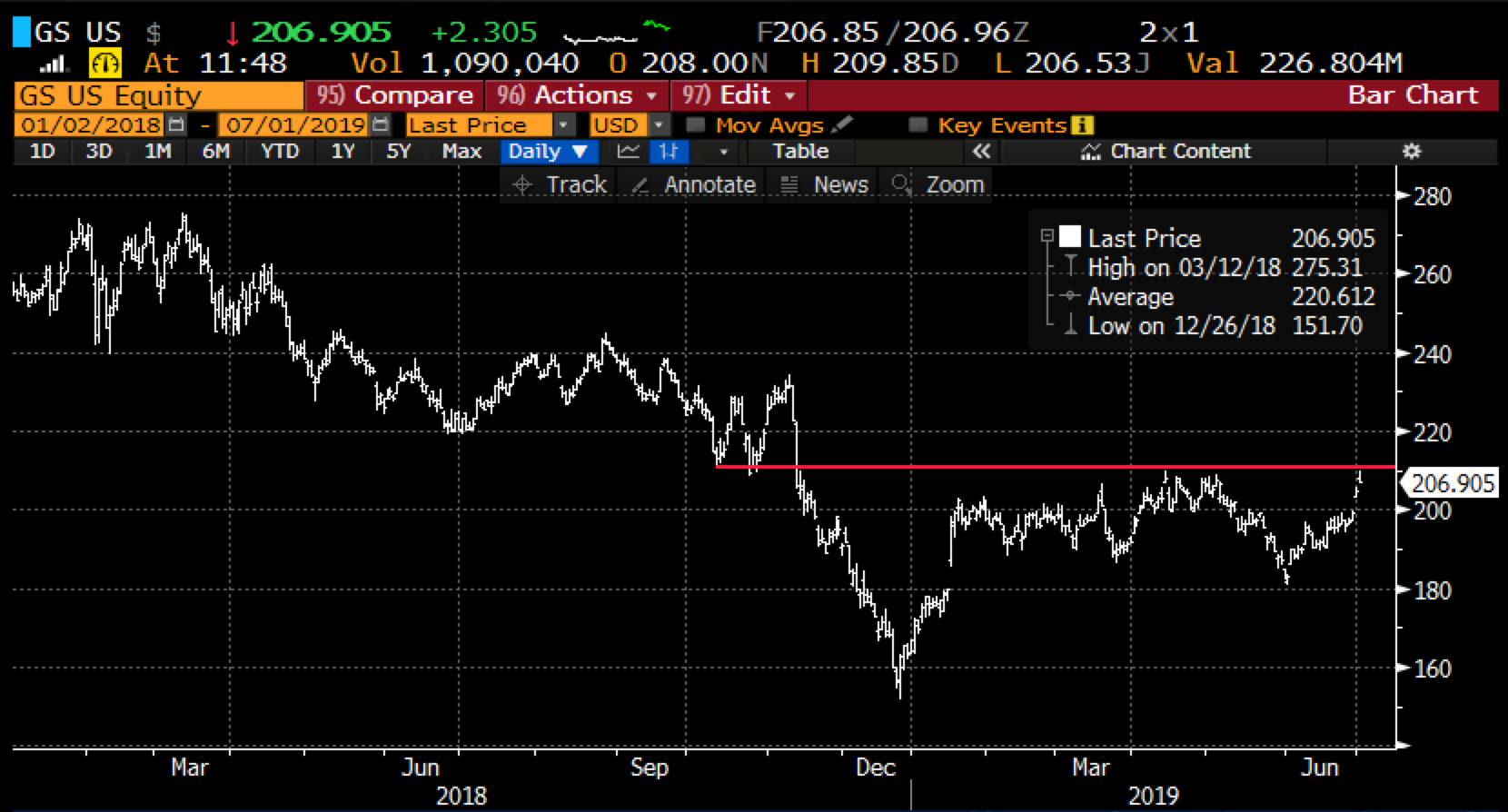 What’s interesting about GS’s 2019 price action is that it was one of the first major U.S. banks to make not only a new post-financial crisis high but also a new all-time high (many U.S. banks are still well below their 2007 peaks). The chart of GS since its 1999 IPO shows the tremendous peaks and valleys the stock has had over the last two decades, but it is worth noting that during the Euro Sovereign Debt Crisis in 2011-12 and then the post-Brexit, pre-trump vol in 2016, GS held the uptrend from the 2009 lows, like a boss, until this past December: 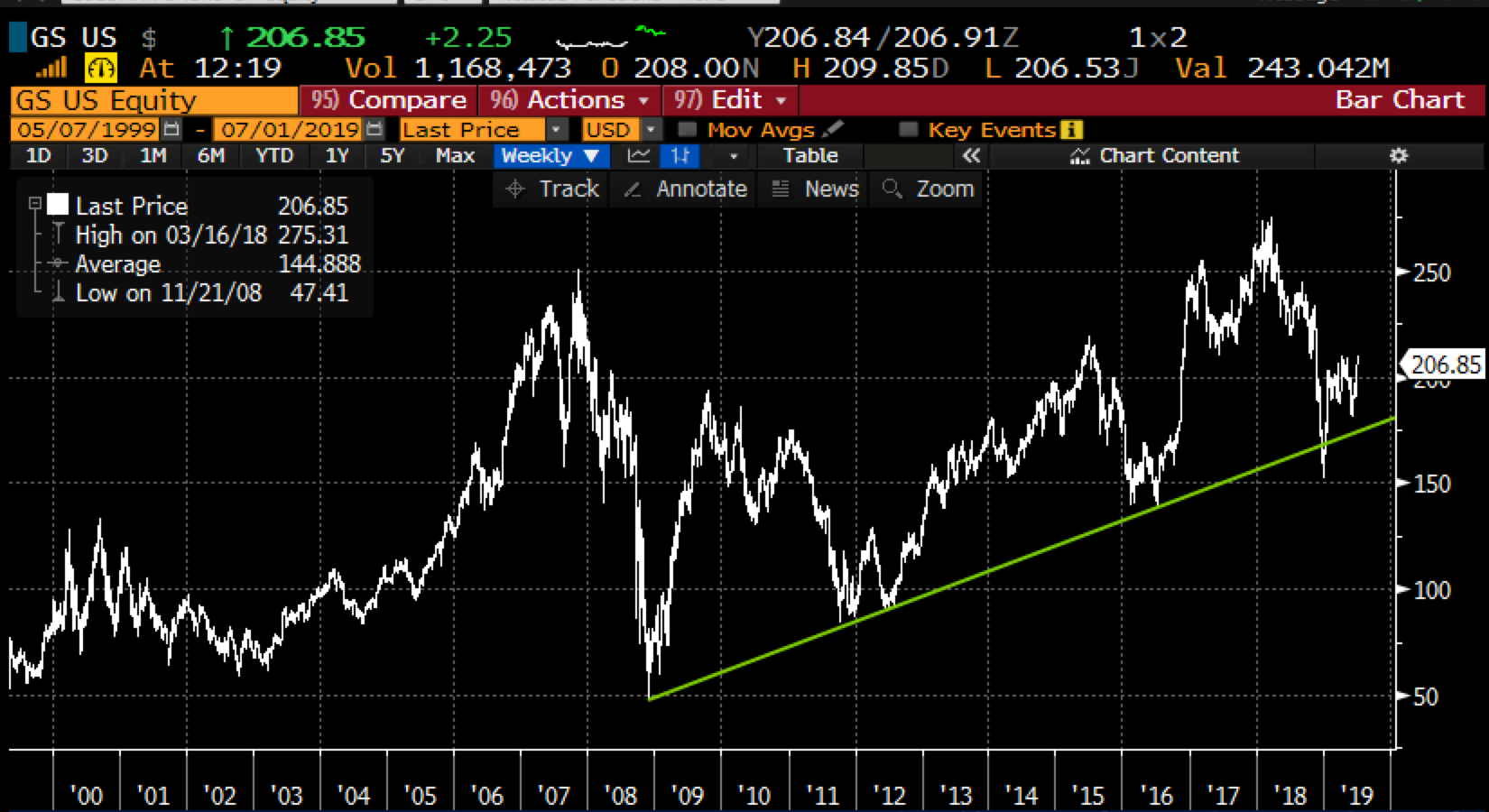 Does that failed break-down suggest the stock tested what it needed to and is now poised for a bounce back towards $250? Or does the brief breach of long-term support suggest the next test might be the one that causes the stock to re-test the 2016 lows nearly 30% lower?

Charts are a funny thing, fairly subjective to most of us and there is plenty of manipulating one can do, For instance, the same GS chart in Log form causes the Q4 2018 breakdown looks like it has been sustained below the uptrend from the 2009 lows, and as we know, past support becomes resistance, and it would appear that for the last nine month’s GS has been unable to meaningful get back in bullish form. 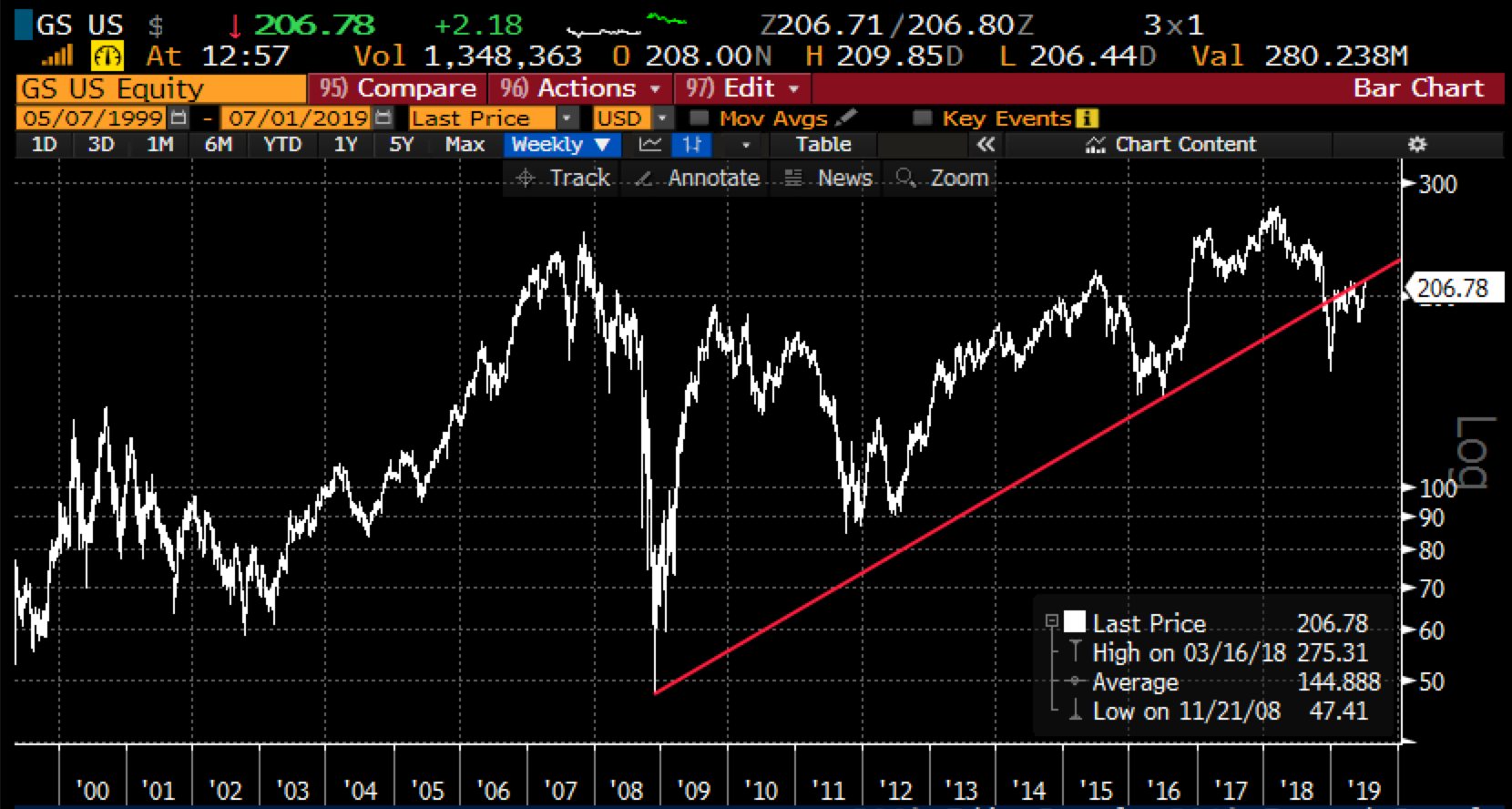 The next identifiable catalyst for GS will be their Q2 earnings that should fall the week of July 15th. The July 19th at the money straddle is implying a little less than a 4.5% move between now and then, which seems fairly cheap considering the stock has moved on average about 4.5% the day following their last three quarterly reports.

This morning’s WSJ posited Why Goldman Sachs Could Be a New Safety Stock, suggesting:

The bank announced it would pay a dividend of $1.25, up from 85 cents, marking its largest dividend boost on record. It was recently cleared to return $8.8 billion to shareholders over the next year, up from $6.3 billion. The bank has historically preferred to buy back its own shares or reinvest capital rather than return cash to shareholders.

That’s all fine and good, but in the years up to the financial crisis, investors were buying GS for their ability to invest, advise and get an ROI superior to their peers. This is all changing in favor for a greater cash return. The stock down 25% from its 52-week and all-time highs as the SPX make new ones, and as the Fed Fund Futures predict a 100% chance of a rate cut later this month is nothing short of puzzling in my opinion, either GS is telling us that everything is about to go pair shaped or there has been a changing of the guard in the investment banking space as we go from ZIRP to NIRP.

If I were inclined to play for rejection and a breakdown from here into and out of earnings I might consider a put spread in July, for instance with the stock at $206.20 you could bu

Rationale: this trade idea risks 1.5% of the stock price with a payout potential of 4 to 1 if the stock is down 6% in less than a month, a period that does include their earnings.

I would also add that the July 190 put sale at 75 cents is NOT a good sale in premium terms, if the stock were to start heading lower in a material way that sale would really be annoying as it would make more sense to look to spread the long 205 put by maybe selling that 190 strike when it was worth at least 1% of the stock price. Often we use spreads to show the risk-reward of the premium spent.

But If I were inclined to play for a breakout of 2019 range, above $210 and earnings to be that catalyst I might consider a call calendar, selling some nearer dated slightly out of the money premium and buying a longer-dated call of the same strike that would catch earnings, for instance:

the ideal scenario for this trade idea is that the stock closes at or just below 210 with the short leg of the trade expiring worthless or covered for small amount while the long July 19th 210 call has picked up some deltas off-setting some decay. At that point, you are left long the July 19th 210 call for just $1.50 and can decide whether to sell a higher strike call to further reduce the premium at risk as you set up for earnings.