At the G-20 this weekend Trump and China’s President Xi will meet and exchange pleasantries through interpreters reinforcing their wonderful relationship while their trade representatives meet and likely make little substantive progress on the most important issues regarding our brewing trade war. Trump seems overly focused on our bilateral trade imbalance, which to be fair can be fairly easily fixed, through tariffs and threats of more, but for the time being this comes at the expense of the U.S. Consumer. This is the easiest way that trump can claim a “win”. Obviously, the far bigger issues and this has broad bipartisan agreement are the obstacles put in place for the U.S. companies to access their markets through forced technology transfer, persistent IP theft and their status as a “developing country” in the eyes of the Wolrd Trade Organization.

Whatever claims of success that come out of this weekend’s talks between the two nations, there is likely to be little progress on issues unrelated to the trade imbalance in my opinion. And if you are hoping for the existing $200 billion in tariffs to be lifted before a broad substantive agreement, I would not hold your breath for two main reasons, first, the existing tariffs, and/or the threat of further tariffs is the only real leverage we have right now, and might be the one thing at this point that can make the Chinese comply with any deal that is struck on further opening their markets to the U.S. Second, without any major concessions, Trump looks like he caved to his base. And that leaves them wondering why our farmers and others who have borne the brunt of the tariffs over the past year have what was it all for??

The FT had a nifty graphic this week of how the tariffs are playing out for both sides and what could come next: 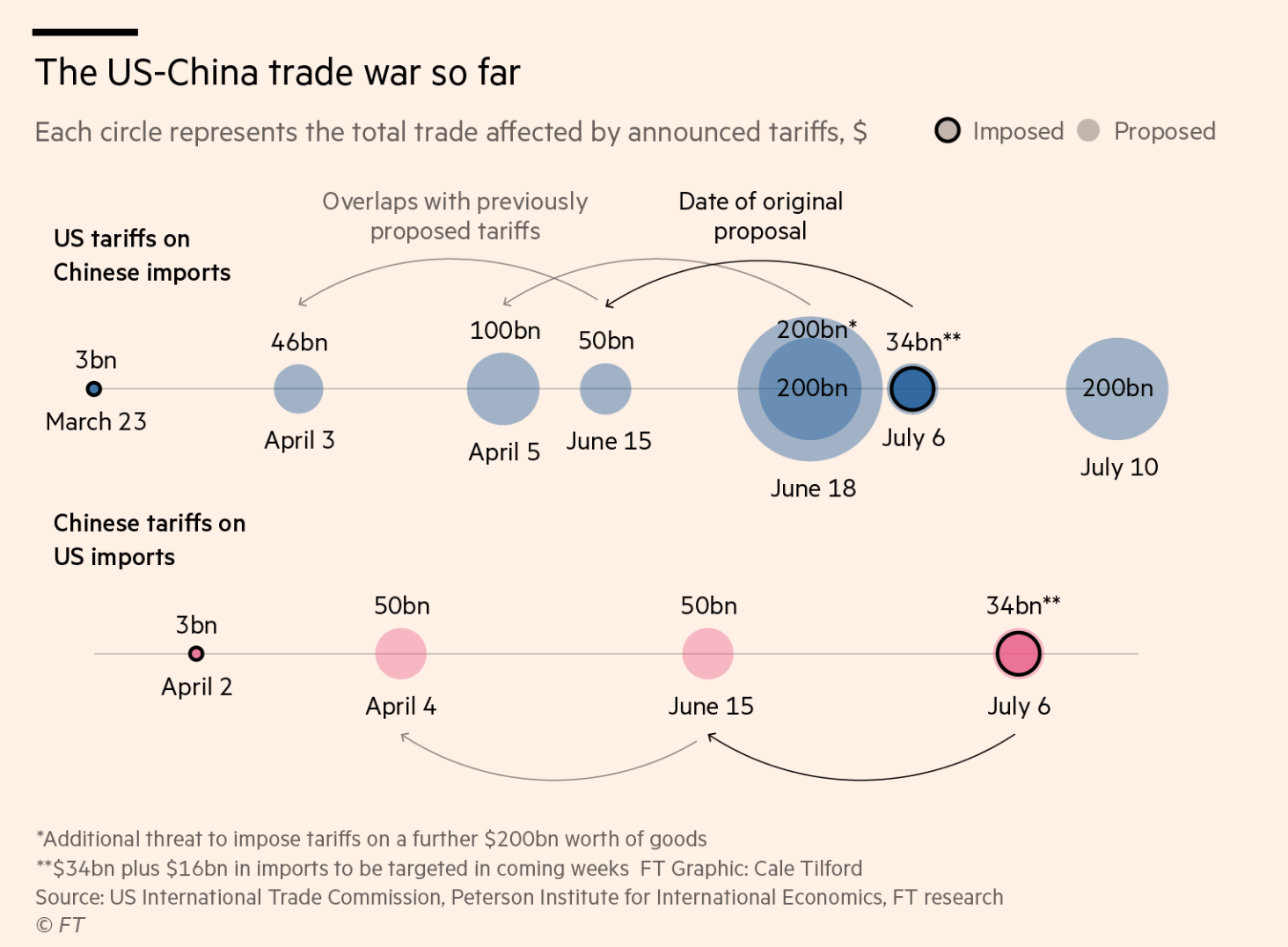 The most important takeaway is that if for some reason all hell breaks out like it did in Singapore earlier this Spring with trump’s other authoritarian friend Kim Jung Un of Noth Korea, and trump throws a hissy-fit and walks out of talks, then we have a tsunami of tariffs coming next month from both sides. In that scenario, we will see a flurry of second-half downgrades to global economic growth and subsequently lower eps guidance from U.S. multinationals like we saw from Broadcom (AVGO) earlier this month who specifically blamed weakening demand as a result of the trade war and from export restrictions from customers like Huawei as a result of sanctions from the U.S. on the Chinese telecom equipment behemoth. 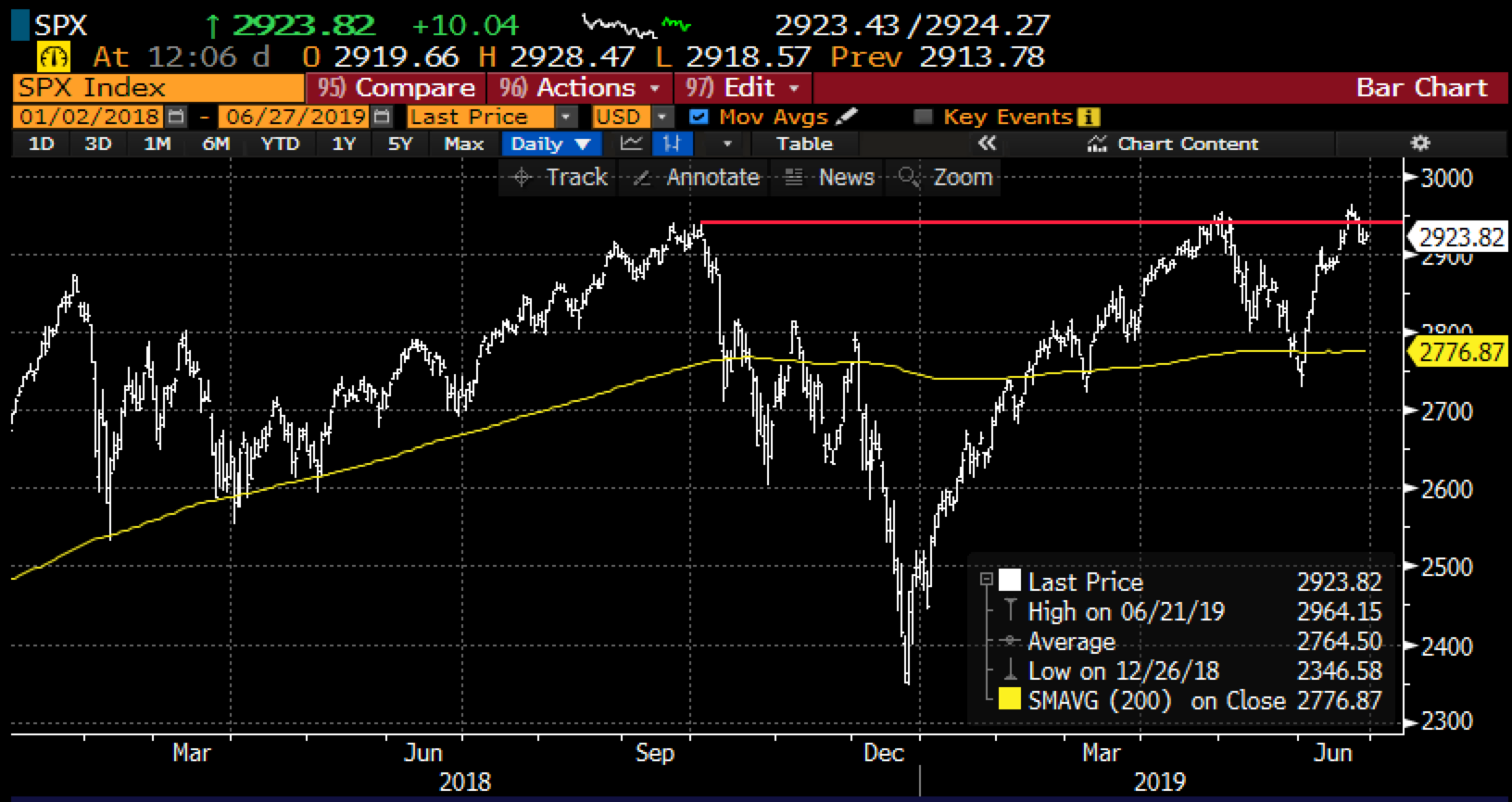 This might look like a decent base in the SPX, but when you consider how low-interest rates have been, most commodity prices, massive corporate tax relief and deregulation during this time period and one might expect far better equity returns. Make no mistake, trade war headwinds are taking their toll on sentiment towards corporate earnings. If there is no deal to point to after this weekend we might see the sort of reaction we did in early December following the last G-20 meeting when expectations were also fairly high about a trump-Xi trade summit. 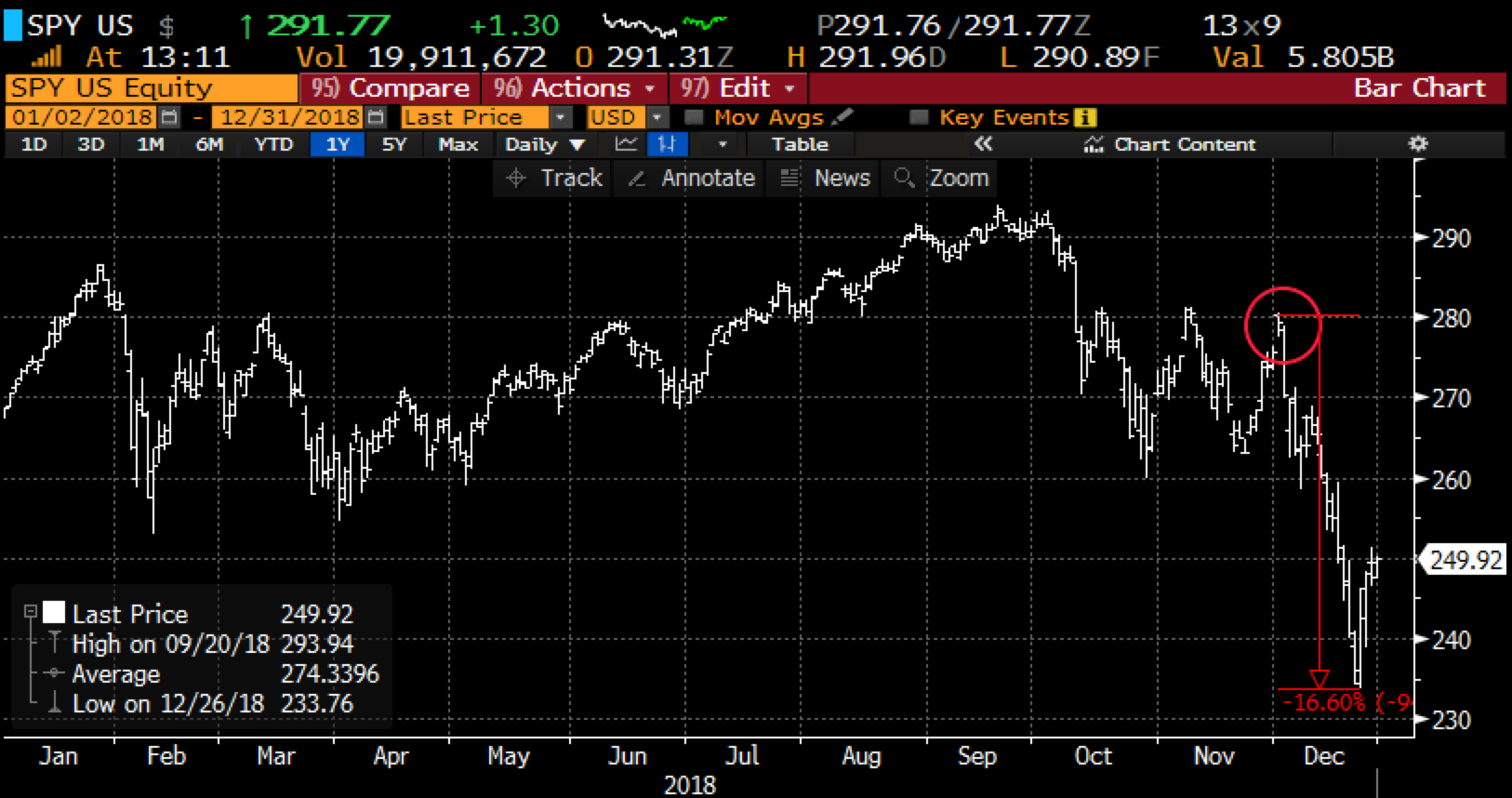 There is little doubt in my mind that there is a high probability of a similar re-do to the December set up, where we had a gap on a BS trade announcement with China and then a crap out on the realization that there is nothing there.

Back to that point about possibly squinting and seeing a nice base on the upper end of the one year char, I see that too, I just think we are far more likely to be disappointed by what comes out of the G-20 than some sort of meaningfully positive surprise to the upside: 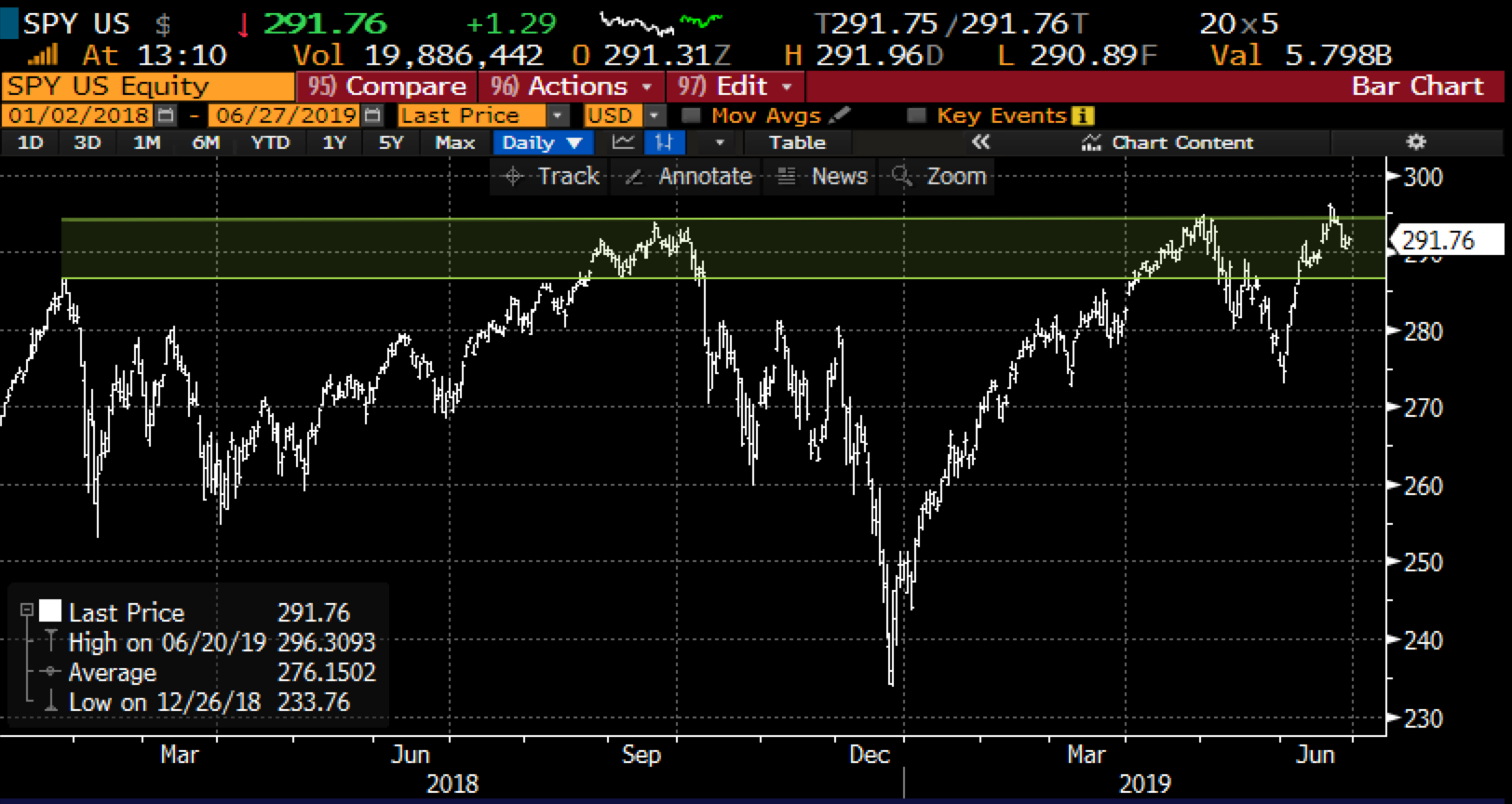 So what’s the trade?? here is the thing, short-dated options prices are fairly cheap in SPY (etf that tracks the SPX) with 30-day at the money implied volatility just below 15%, which is up substantially in vol terms from its sub-10 print in April when the SPX made it’s last high, but below the one year average of about 16.5%. This tells me that traders are looking at this weekend as an event, while back in April traders were a bit more complacent about the risks from an ongoing trade war.

To put this in some context, the July 292 straddle (the call premium + the put premium) are offered at $8, implying movement of 2.7% in either direction between now and the close on Friday, July 19th, a rally above 300, or a decline below $284.

Put another way, if you wanted to make a little less than a 1 month bet that will capture this weekend’s G-20 and a whole bunch of earnings in mid July, then buying either the at July 292 call or put for just $4, or 1.3% of the etf price seems like a fairly cheap way to do it. At this point, it makes little sense to start with a spread if you were to buy the at the money put and call and it starts going in your direction you could always sell a higher strike call or a lower strike put to lock in some of the gains.