Last night on CNBC’s Fast Money we discussed the dichotomy of the S&P 500 (SPX) trading at all-time highs, with the backdrop of a weakening U.S. economy, a Federal Reserve that is very likely to cut interest rates in an effort to supposedly stoke inflation.  Interest rates have come in sharply this year, and gold and even bitcoin are rallying hard, this is the sort of action one might expect prior to some sort of market dislocation, watch below;

We also discussed the inability for small-cap stocks, banks and FANG to confirm the new highs in the SPX, and our lack of confidence in the leadership, specifically what most deem to be defensive (stocks or groups that act well when the economy is faltering like Consumer Staples, REITs and Utilities… see my post from Friday PG does not go up when the economy is on fire).

I went on to suggest that investors have also been crowding into Microsoft (MSFT), the M in MAGA, which seemingly makes new highs every day and is trading up nearly 33% on the year and sporting a market cap of north of $1 trillion. I guess the MAGA thing is catching on because the peeps at CNBC made me my very own graphic, pretty cool! 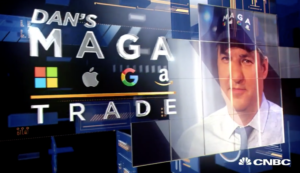 One of the main reasons I am focused on MAGA (MSFT, AAPL, GOOGL & AMZN) as opposed to the nifty FANG is that these four stocks at their highs last year made up $4 trillion in market cap, or almost 45% of the weight of the Nasdaq 100, FANG while cute, is more interesting to me from a sentiment standpoint, but what is most important to this discussion is that all of these stocks are north of 25% on the year (except GOOGL), and all but MSFT have confirmed the new highs in the SPX. It has been my view that given the current leadership in the market, it would be nearly impossible for the SPX to break out of the 18-month range and make material new highs without the participation of MAGA as a group. 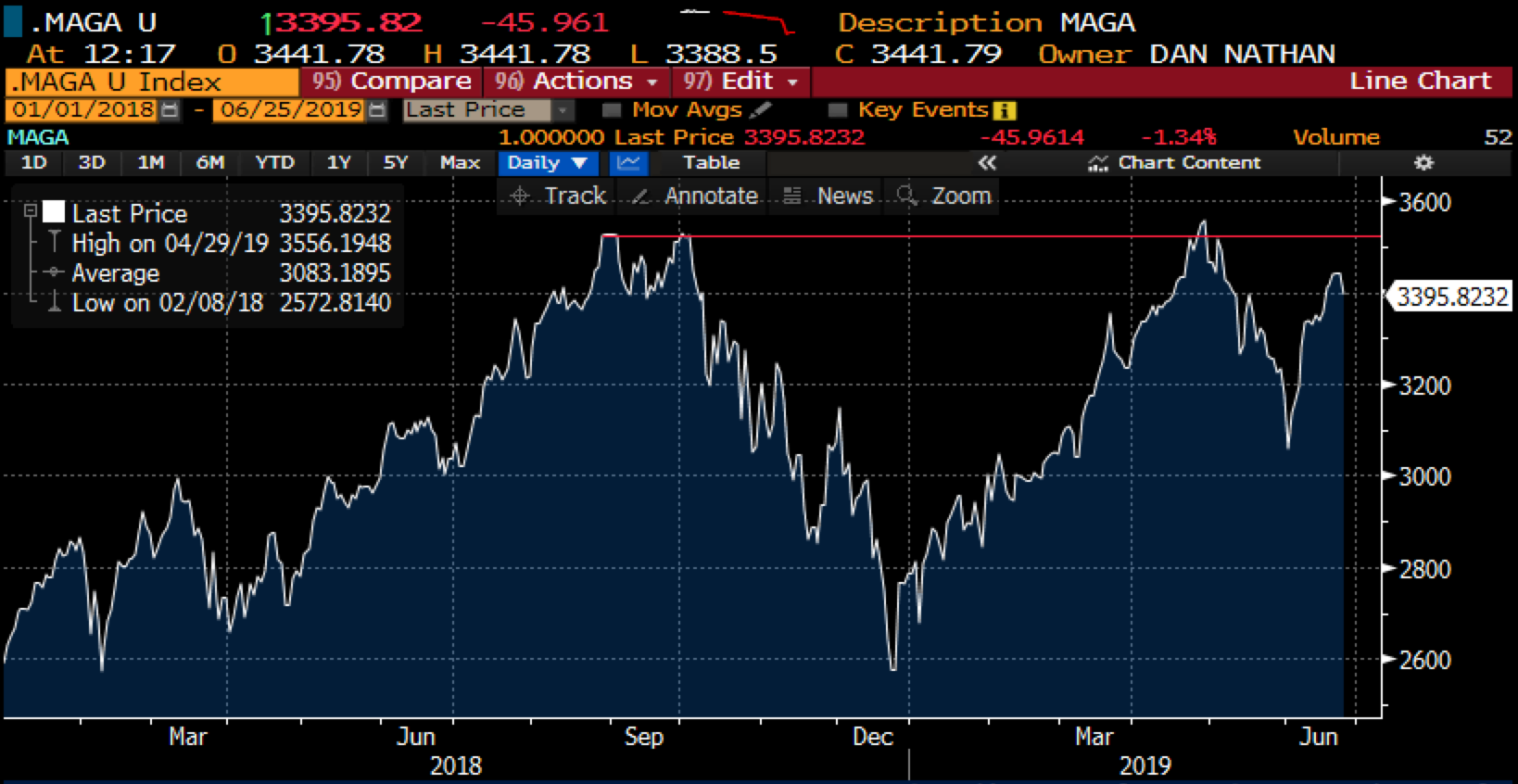 And for all that heavy lifting that MSFT is doing, its valuation on a P/E basis nearing 30x, trailing, 26x forward, while its PE/G (PE to Growth) is nearing 2.5x, both metrics near decades-long highs: 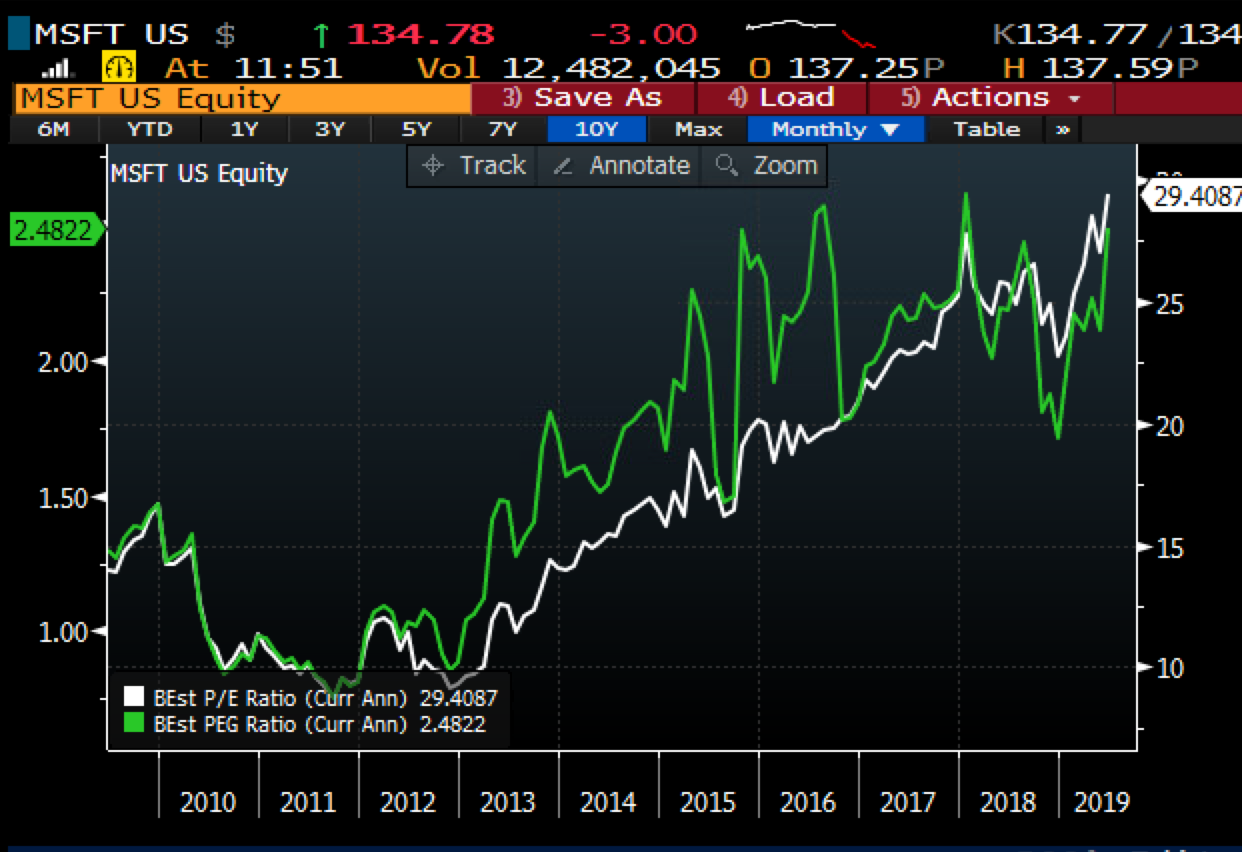 This morning Jeffries analyst John DIfucci, a long-time bear on MSFT, reiterated his Sell rating but raised his price target from $80 to $90 suggesting in a research note: 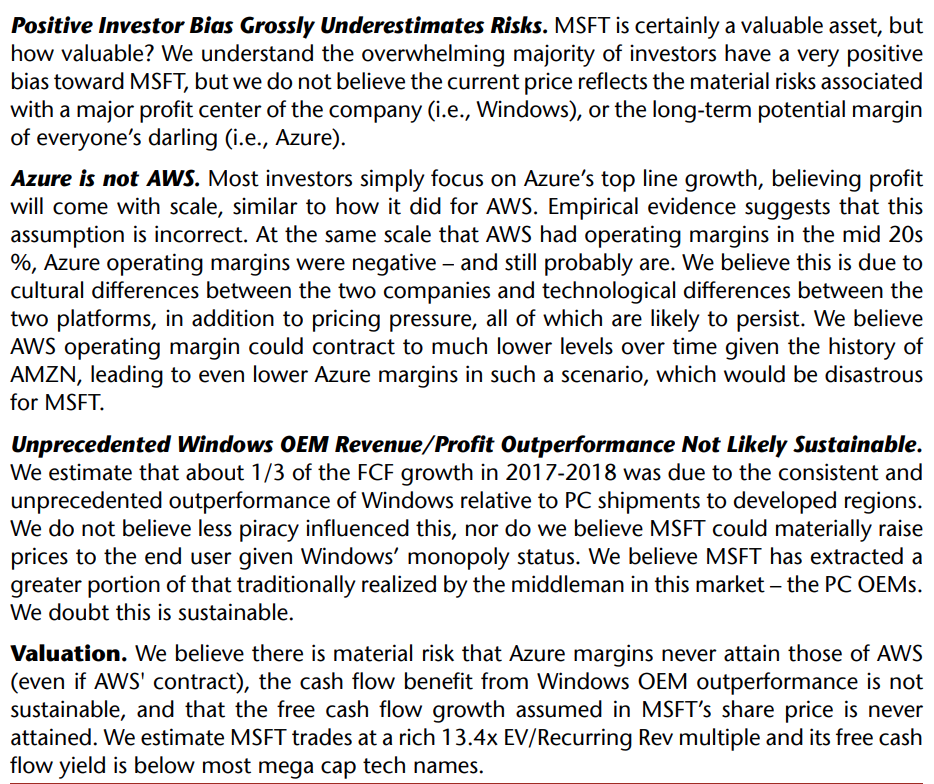 Maybe Difucci will be right this time. But the commentary at the very least got investors thinking about just how far, how fast this stock has run, with today’s 2.5% decline, its largest decline since June 3rd when the stock closed below $120. The stock is now quickly approaching near-term support at $132, which is the intersection of the uptrend from the December lows, and its breakout to new all-time highs on June 7th. Below that the next real support level is that June 3rd low near $120:

Aside from broad market jitters associated with the trade war with China, the next identifiable catalyst for shares of MSFT will be their fiscal Q4 results that should come on July 18th. The options market is implying about a $6 move between now and July expiration on July 19th, or about 4.5% in either direction, which seems fair given the potential macro headlines and earnings.

Short-dated options prices have been ticking up in MSFT this month, with 30-day at the money implied volatility nearing 25% close to the levels prior to their report in mid-April, well off of the post-earnings April lows of 16%, but well below the late December highs of 42%, when the stock was trading near $95, just prior to its near 50% rally to yesterday’s highs.

Short-dated options prices look fair to cheap for those looking to make near term directional bets in MSFT. It is certainly hard to press a name like MSFT on a down day like this, but for those who think the G-20 will be a sell on the news and without a substantive trade deal, companies start to give murky second half guidance in July, then it makes sense to look at near the money puts in a stocks like MSFT where so much positive sentiment appears to be concentrated in it in by so many investors. It is likely the most crowded trade in the market.