FedEx (FDX) will report their fiscal Q4 results tomorrow after the close. The options market is implying about a $9 move between now and Friday’s close, or about 5.5% move in either direction (most of which is for Wednesday’s post-earnings reaction). Over the last year, the stock has been volatile the day following results, declining 3.5% post Q3, 12% post Q2, 5.5% post Q1, and 2.7% post Q4’18.

Despite being down nearly 40% from its 52-week highs made last June, shares of FDX are only up 1% on the year, and once again looks poised to test what bulls on the stock were hoping might be a double bottom just above $150: 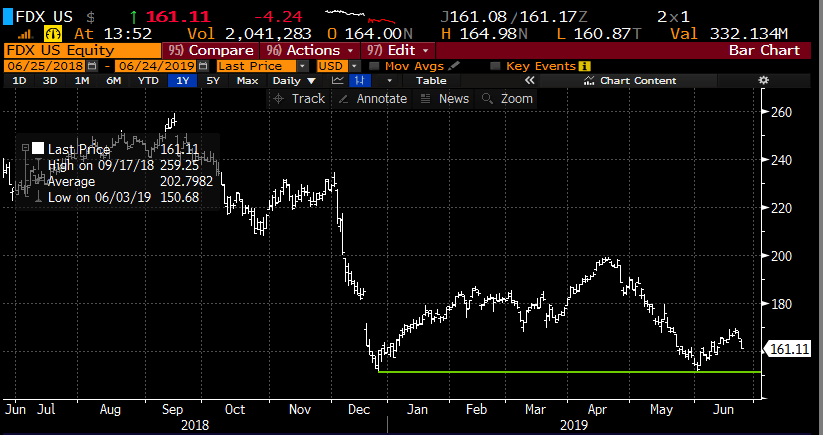 Taking a look at the ten-year chart, dating back to its financial crisis lows, $150 seems to also match the uptrend that has been in place since: 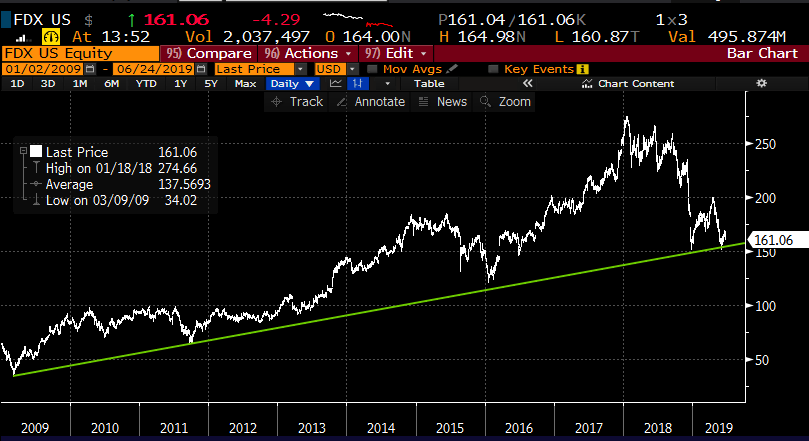 But don’t take my word for it, here is Cater Worth, chartist extraordinaire on Friday’s Options Action on CNBC looking at the transports as a group and FDX specifically:

Our other co-panelist Mike Khouw laid out a bearish near term fundamental case for FDX and matching Carter’s bearish technical view laid out a defined risk strategy to take advantage of elevated options prices into earnings, while also playing for the stock to stay below $170 by July expiration, Mike’s idea was to sell the July 170 /175 call spread at $1.90, which would be his max gain if the stock was below $170 on July expiration, risks losing $3.10 if the stock is between $171.90 and $175 with a max loss of $3.10 if the stock is above $175. 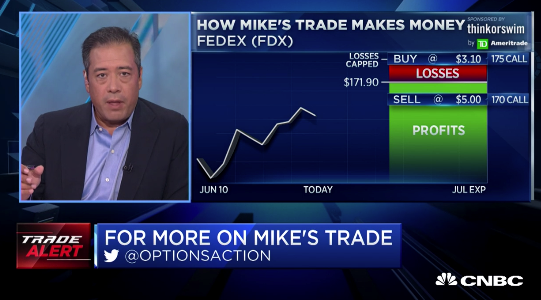 As I said in the clip, this trade has a relatively high probability of small success as long as the stock is not up more than the 5.5% implied move from current levels…

I see what Carter sees, and I get Mike’s fundamental take. The company has routinely lowered forward guidance on the last few calls, and the stock price and multiple have suffered sorely. If the company were to lower again, and the stock’s reaction is muted, and it holds $150, then buyers will likely rush in with the whiff of a substantive trade deal with China. FDX has the double whammy of being in Amazon’s sights, but also on the front lines of the trade dispute with China, as the company is suffering from weaker volumes resulting from less trade, but also the target of the Chinese in response to their companies being targeted by the U.S.

If you thought as Mike and Carter do that the company will issue another disappointing earnings report and that the stock has risk at least back to its support level of the last six months, then consider the following put spread:

Rationale: this trade risks nearly 3% of the stock price that has the potential to return close to 10% if the stock is down 13% in the next month.

Or If you are inclined to think that the company will be able to squeak out an inlined quarter to their prior guidance and some of their recent commentary on the state of their business, and strike a more optimistic tone into the back half of the year which will include the Holiday’s and possibly a thawing of the trade dispute, then consider the following trade idea:

This trade performs best with the stock at or just below 170 on this Friday’s expiration. If the stock is below 170 the short June 28th 170 call will expire worthless and the trade will be left naked long the Sept 170 call for $5. If the stock is close to 170 then the Sept 100 call should have appreciated as it will have picked up deltas. At that point it might make sense to further reduce the premium at risk by selling a higher strike call in Sept turning the trade into a vertical call spread. The max risk of this trade is the $5 premium paid, and would be at risk with a large move below the current level, or well above the 170 strike.

The main idea of this trade idea is to lean bullish, help finance a longer dated call by selling elevated short-dated premium and look to further spread the Sept call and play for a rebound back to the April highs near $200 into the fall.