Today after the close Oracle Systems (ORCL) will report their fiscal Q4 results. The options market is implying about a 4.75% (or about a $2.50) one-day move tomorrow which is very rich to its 4 quarter average one-day post-earnings move of only 2%, and it is worth noting that the stock has only moved about 30 basis points each time following the last three earnings reports.

The one year chart below shows the fairly obvious technical support level between $52 and $50, and the only real technical resistance at the April all-time highs just below $56: 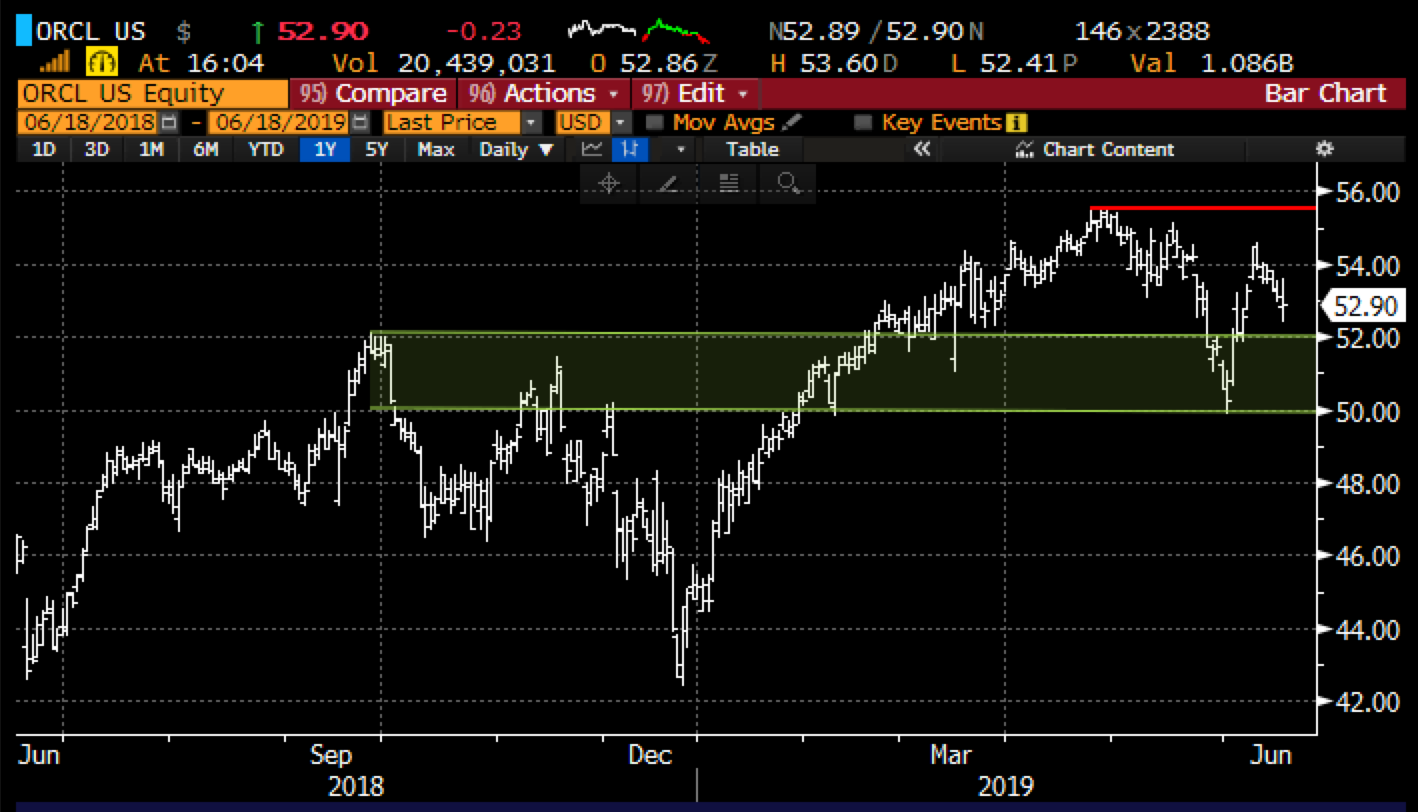 ORCL trades below a market multiple at just 14x expected FY 2020 eps growth of 10% on 2% expected revenue growth, which is an uptick from this year’s expected 1% decline. Despite cheap valuation relative to the market and faster-growing cloud peers, Wall Street analyst remain fairly cautious on the stock just a few percent from its all-time highs, with only 9 Buy ratings, 22 Holds and 5 Sells with an average 12-month price target below where the stock is trading at $52.91. Analysts caution that the company’s growing net debt to assist in the buyback of shares is unsustainable ($10 billion a quarter for the last three quarters) in an effort to achieve double-digit eps growth on the heels of weaker than expected growth…per Barron’s: cloud- and customer-services revenues inched up 1% to $6.66 billion, edging past analysts’ forecasts of $6.64 billion. Fees for software licenses both via the cloud and on premises declined 4% to $1.25 billion. Analysts expected $1.24 billion.

Which brings me to the company’s decades-old strategy to acquire growth and manage eps through buy-backs… the company is probably due for a mega-acquisition, with their last being their $9.3 billion deal to buy Netsuite in 2016. Last week arch cloud rival Salesforce.com (CRM) made a nearly $16 billion bid to buy data-visualization company Tableau (DATA), which came less than a year after their $6.5 billion acquisition of corporate data integration software company Mulesoft.

The heat is on ORCL, a big cloud deal is coming, and given who is out there to be acquired, it will be expensive, and dilutive and I suspect ORCL shareholders will not give the stock the sort of pass that CRM shareholders have done to date, this is what they have signed up for, revenue and bookings growth at all costs using their own inflated currency to do so.

So what’s the trade? I would be pretty surprised if the company is able to post a meaningful beat in raise of the sort that investors will not be able to see as anything short of manufactured on the eps front and pulled forward into the fiscal year end on the revenue front.

But if you thought the company could pull off a high-quality beat and raise and the stock will break out to new highs and possibly keep going on its way to the highs 50s in the coming weeks then consider the following call spread in July expiration:

Rationale: this break-even is up in line with the implied move, but if the stock really gets going in the next month and can rally 10% then this trade risks 1% of the stock price to possibly make 4%. A good risk-reward with a logical technical target if the stock breaks out to new highs,

Or If you lean a tad more skeptical and think the company is likely to make a very expensive acquisition based on decelerating growth in strategic initiatives like cloud, then consider put spreads in August targeting a move back to the mid $40s:

Rationale: this trade gives a little more than 2 months for a bearish thesis to play out and offers a break-even down about 4% with a trade structure that allows for up to a 4 to payout in the event that the stock is down 15% by August expiration.