On June 3rd my friend Carter Worth, technician extraordinaire from Cornerstone Research made a contrarian bullish call on shares of Tesla (TSLA) when it closed at a new 52-week and multi-year low near $177, watch here: 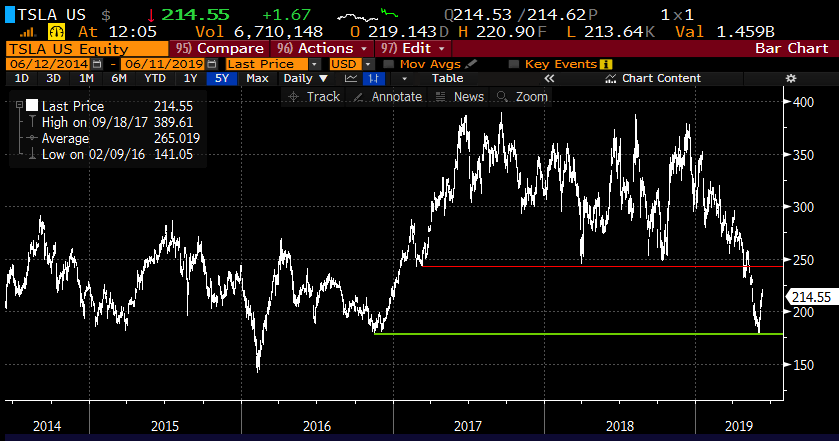 My question for Carter in the clip was when and where would be the level to lay out a short again?? His comment was this is a short term trade… I would add that the $240-$250 level looks like an epic short entry. The stock is now trading down $7, or about 3% from this morning’s high, which might indicate the rally is running out of steam, but to reiterate, $250 is the intersection of the uptrend from the December 2018 highs and the breakdown level in late April and might be the level worth waiting for to lay out shorts: 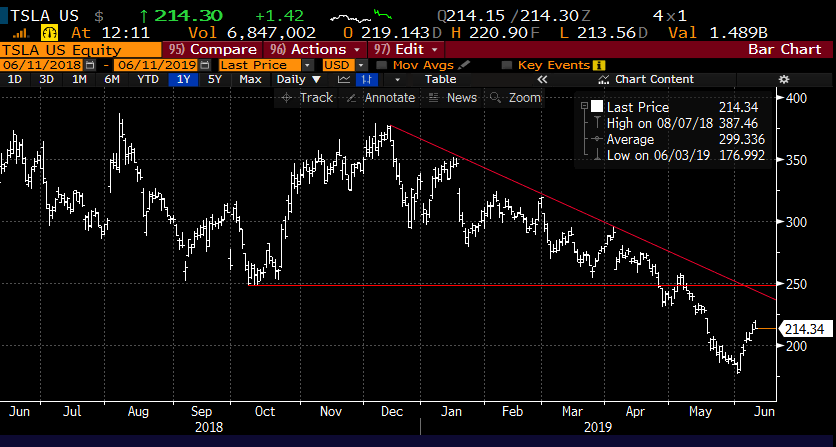 There appears to be a bearish roll in June options today when the stock was $216, shortly after the close, a trader sold to close 7500 of the June 21st 200 puts at $2.45 and apparently bought 7500 of the June 28th 210 puts for $8.15. This might be a long holder rolling up some near-term protection. With earnings not expected to come until late July, it is hard to guess why someone might roll this position up $10 and out one week aside from protecting a long.

For those looking to set up for an earnings disappointment in late July, but worried about a short entry here… one might consider a put calendar, selling a short-dated out of the money put and using the proceeds to help finance the purchase of an out of the money longer dated put of the same strike… for instance…

The ideal scenario is that TSLA stock is near 195 on June expiration and the short 195 put expires worthless or can be covered for a small amount and you are left long August 195 put for $13 or about 6% of the stock price.

The max risk of the trade is $13 on a sharp move higher than current levels or a sharp move below the $195 strike price.

Rationale: if you thought the stock might consolidate between now and next Friday above $195, but you are eyeing the next earnings announcement or update on deliveries in July to cause the stock to retest the recent lows, then put calendars make sense. If the stock is at or above $195 next Friday one could sell an out of the money put in July to once again make a call calendar, but possibly a diagonal by selling a lower strike put than the 195 strike, or turn into  vertical in August by selling a lower strike put than 195 making a put spread.

Why a calendar rather than outright put purchase?? Short-dated options prices are jacked, with 30-day at the money implied volatility at 65% (the price of options, the blue line below) trading at a wide-spread to 30-day realized volatility at 55% (how much the stock is moving, the white line below):