The last four trading sessions, shares of Starbucks (SBUX) have opened on their lows and closed on their highs, rallying nearly 9% in a straight line, with the stock making new all-times with each close, trading 20% above its 200-day moving average (yellow line below), which is significant when you consider just about half the stocks in the S&P 500 are even above their 200-day. As I write SBUX is up nearly 30% on the year and up a whopping 75% from its 52-week lows made in late June 2018. 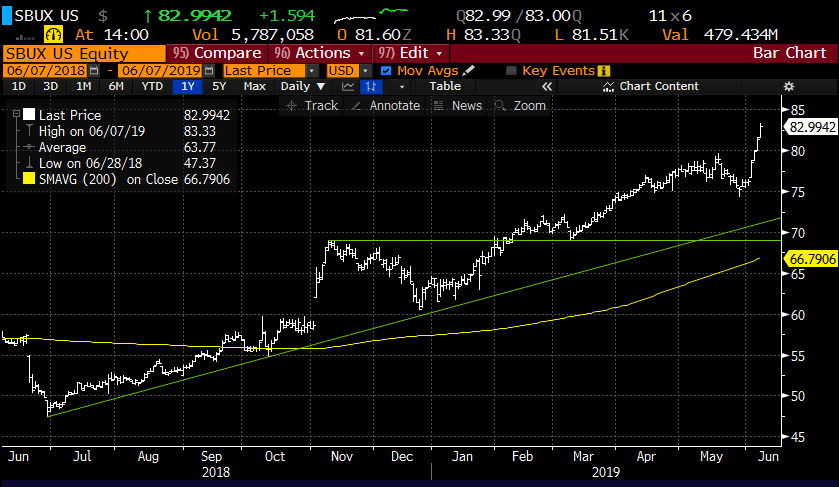 The broad market has caught a bid this week as the Fed has once again hinted to a commitment to their dovish pivot back in January, and this week from the see-saw action of the trade rhetoric with China and Mexico. With China making up close to 20% of Starbucks operating income, and much of its expected future growth, investors were paying close attention to last month’s IPO of upstart Chinese coffee seller Luckin Coffee (LK) which went public on the Nasdaq, selling  33 million shares at $17 apiece. While the companies have very different models, LK is a takeaway/delivery store model with lots of promotions, Starbucks has stuck with the coffee house appeal, but both are competing in a fairly nascent coffee market in one of the most populous regions in the world.

On the heels of LK’s ipo, and the trade war rhetoric heats up, one very real near term issue facing SBUX could be the potential for a nationalistic backlash to U.S. brands in China if the trade war persists at a time where LK pushes full steam ahead with aggressive growth plans targeted in SBUX strongholds, per WSJ.com: 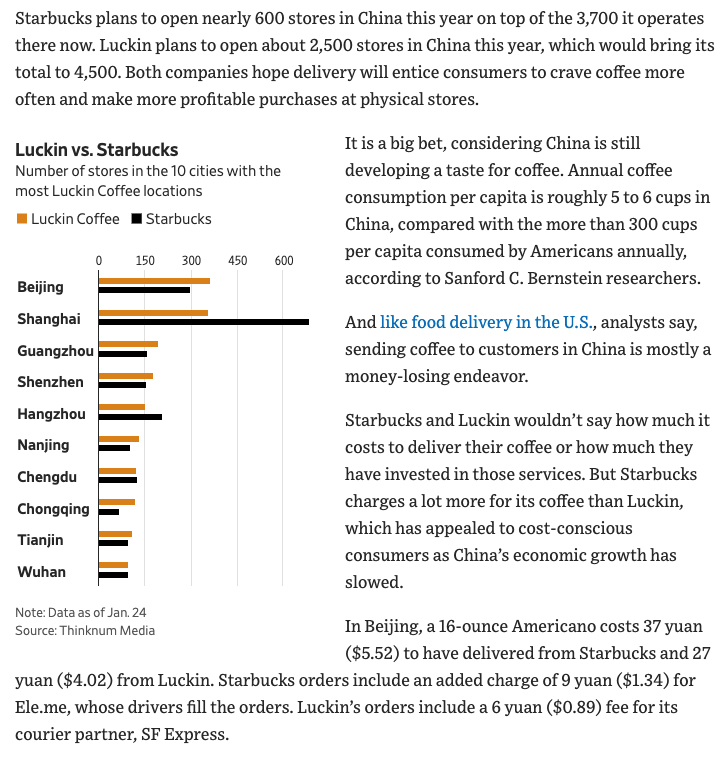 When SBUX reported FQ2 results back in late April the company posted a beat and mild raise with same-store sales beats in both North America and China, but the stock remained rangebound until this week as the stock’s P/E multiple near 30 has left investors and analysts alike to ask whether or not the stock is priced to perfection, with just 14 analysts rating it a Buy, 17 Hold, and 1 Sell.

The next identifiable catalyst will be the company’s FQ3 results which should come in late July. With the stock up on a massive breakout, no end in sight to the trade war with China, LK’s need to continue to press on growth, and SBUX’s valuation nearing multi-year highs, I suspect the slightest hiccup in the quarter, and a downgrade to guidance, coupled with some broad market downside vol this summer and SBUX is re-testing the low $70s.

Rationale: this trade idea risks 3% of the stock price to make a more than 2-month bearish bet that breaks even down less than 4% that also incorporates one specific catalyst and others that might well affect the trade’s outcome.