I guess most importantly, AMD is breaking out of a multi-month base, trading at 2019 highs, while the SMH is trying to find some support down 16% from its all-time highs made in April: 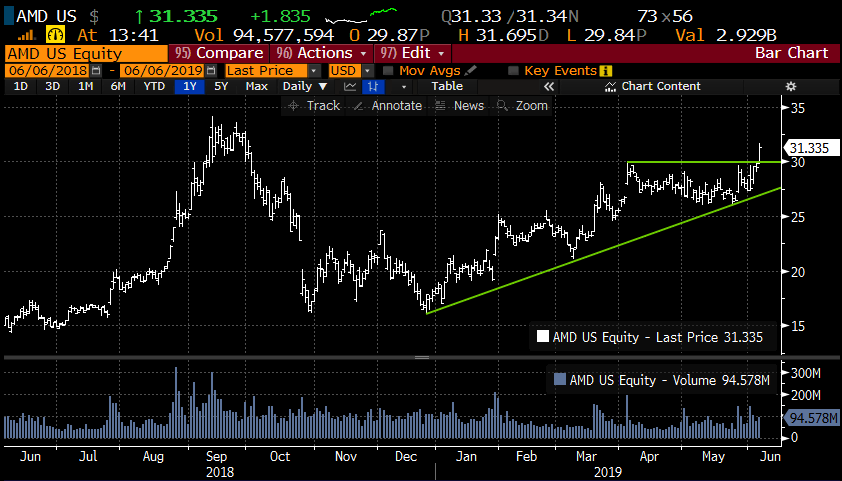 Call volume in AMD is running 2x that of puts today and total options volume is 2x average daily volume.

Regular readers know that I place no special emphasis on unusual options activity, it is nearly impossible to take anything truly meaningful away from merely identifying it, without knowing who is buying or selling, for what reasons and possibly against what equity position it is merely a guessing game. But in this instance seeing this activity reinforced what was already positive relative strength to its peer group and at least one trader’s belief of higher highs over the next two weeks vs merely letting the existing position run or taking profits altogether.

All that said while investors appear to be fairly geeked up about the late May announcement of new desktop chips in early July, new server chips in the third quarter, and Monday’s announcement of a multi-year strategic partnership with Samsung for mobile and smartphone chips analysts remain fairly mixed on the stock with 17 Buy ratings, 16 Holds and 5 Sells with an average 12 month price target o $29. I would also note that with the stock approaching the prior 52-week high just below $35, that level might prove to be important technical resistance, a level that when it failed last year from resulted in a 53% peak to trough decline back to its earlier breakout level: 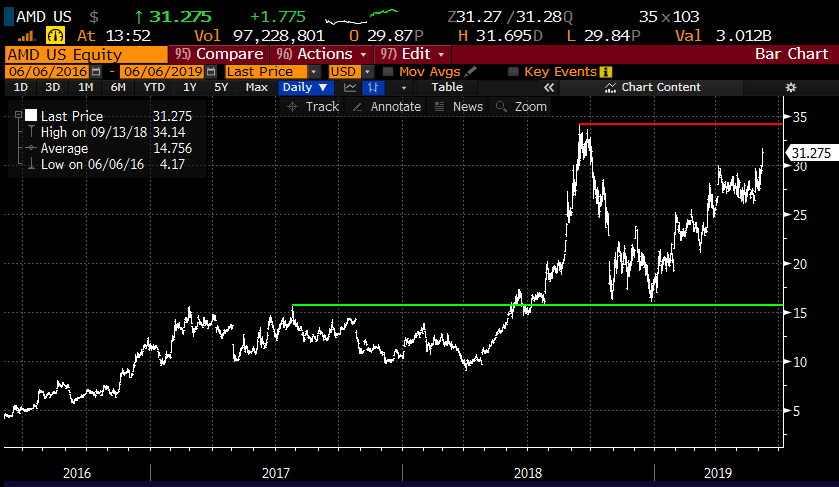 Absolute levels of implied volatility (the price of options, blue line below) are high, with 30-day at the money implied vol at 53%, but compared to 30-day realized volatility at 56% (how much the stock is moving, white line below), options prices seem fair for those looking to make defined risk directional bets.

The next identifiable catalyst will be the companies’ Q2 earnings the last week of July, obviously the higher it goes into that, the greater the risk of a disappointment for a stock that trades in waves and also trades nearly 50x expected earnings and nearly 5x sales that are only expected to grow 6% this year.