I’ve said it on many occasions over the last year, Apple will be one of the last battles fought in the ongoing trade war with China. Why? Well, they manufacture 200 million or so iPhones in China a year, and including their vast supply chain, they employ indirectly through contract manufacturers and others maybe 2 million Chinese workers. Most Apple devices manufactured in China are obviously shipped overseas, making them subject to tariffs, making some of the parts that go in them subject to retaliatory tariffs, and if all those taxes result in less demand for iPhones that are more expensive because of the tariffs and possibly nationalistic fervor by Chinese consumers, then fewer Chinese will be employed to make Apple products.

To quote The Dude… “this is a very complicated case, Maude. You know, a lotta ins, lotta outs, lotta what-have-yous. And, uh, lotta strands to keep in my head, man. Lotta strands in old Duder’s head”

One seemingly everpresent puzzle piece in the trade dispute with China has been their tech and telecom equipment behemoth Huawei, specifically the U.S. reluctance to allow U.S. companies to use their tech in the U.S. and the pressure being put on our allies also not to use it in the buildout of 5G networks for security reasons. This also comes at a time where the iPhone market share in China is declining rapidly to less than 7%, while Huawei’s has been increasing to be the number one smartphone provider with 30% share. The targeting of Huawei has squarely put Apple in the sights of Chinese leadership. Wired magazine had a good summary of the options that Bejing has at their disposal in an article yesterday titled: If China Really Wants to Retaliate, It Will Target Apple among the options listed:

Apple’s recent deceleration in China coincided with the beginning of the tariff war last spring. It’s hard not to see a connection, especially in light of recent evidence that the US actions against Huawei are creating a nationalist backlash in China manifested as a “buy China, boycott Apple” movement.

Beijing almost certainly can ratchet up or dial down the nationalist fervor by manipulating social and traditional media.

The government could make it harder for Chinese citizens who bought Apple products to access the App Store, or place onerous conditions on Chinese and foreign developers

The government could simply ban the sale of iPhones in China using the same justifications that the US is using against Huawei: national security and data security. While Apple is not a major defense contractor and has in fact tangled with Washington and the FBI over encryption, the Chinese could simply say that the presence of foreign hardware and security-protected operating systems violate its laws about data security and its right to access citizen data

Your guess is as good as mine whether or not we will have a substantive trade deal anytime soon, but with trump rattling our adversaries and allies alike on trade issues, it would not be hard to see a scenario where they try to wait it out and get a better sense of his political fate as we go into the 2020 election year. Is there a deal to be done soon with China? Maybe but it would likely be one that affects the bilateral trade deficit that trump is oddly fixated on with China, not one that deals with the issues detailed above (many very legitimate) about China’s unfair trade practices relating to access to their markets, forced technology transfer, and IP theft. Those will likely take some time and gentler negotiations to fix.

Back to Apple, the year started on Jan 2nd with CEO Tim Cook’s stark warning about a slowdown in China, and just four months later on April 30th on their fiscal Q2 call Cook seemed to change his tune with a little trip to China in between: 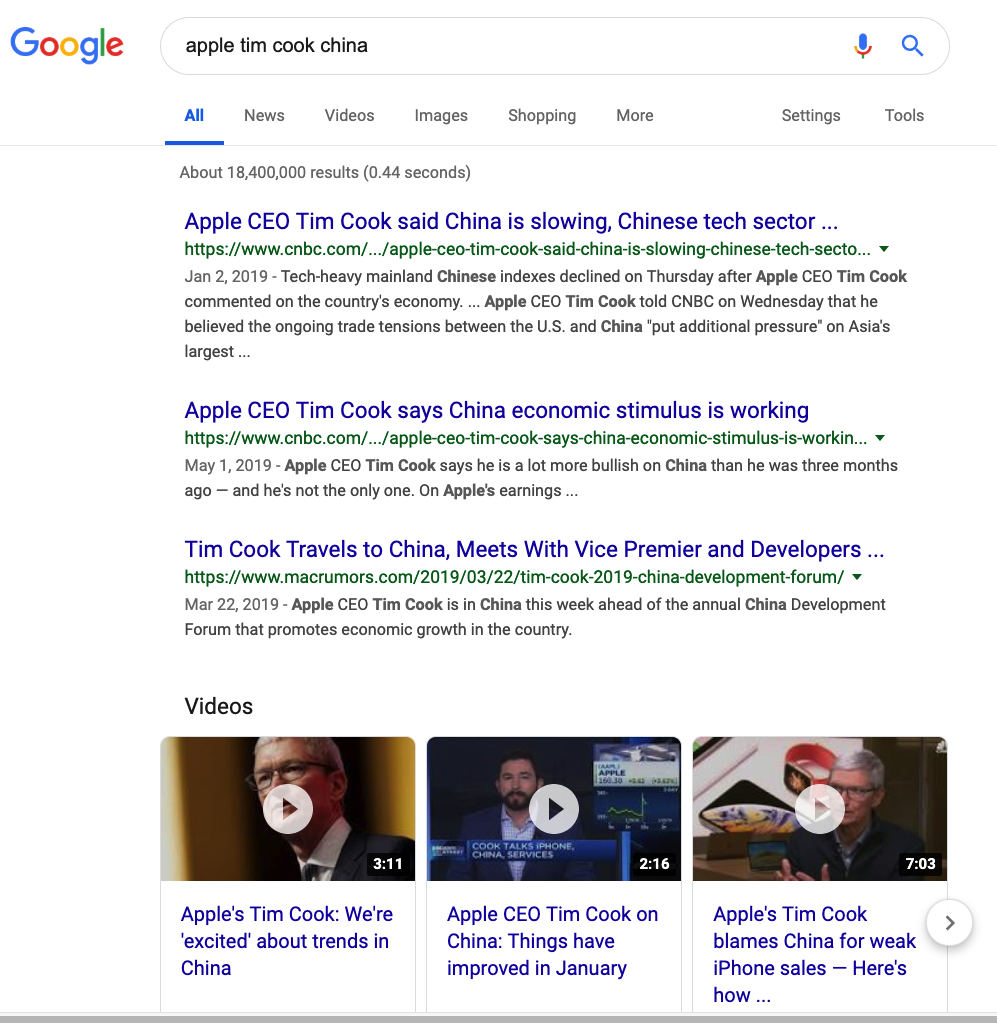 Apple’s stock has been volatile in 2019 to say the least, bottoming the day after the Jan 2nd preannouncement at $142, a nearly 40% peak to trough decline from its October 3rd all-time high… only to rally 50% from its Jan 3rd post fQ1 low to its May 1st post fQ2 high… you following all of this, and since Cook said he is “excited by trends in China and that stimulus is working on fQ2 call, the stock has since declined 18% leaving the stock up 12% on the year. A look at the chart of Apple since the start of 2017 shows a fairly wide support level between $160 and $140, which I suspect is a level the stock could easily re-test if it appears the trade dispute with China is not going away. While on the flip side, the stock has apparent overhead resistance between $200 and $220: 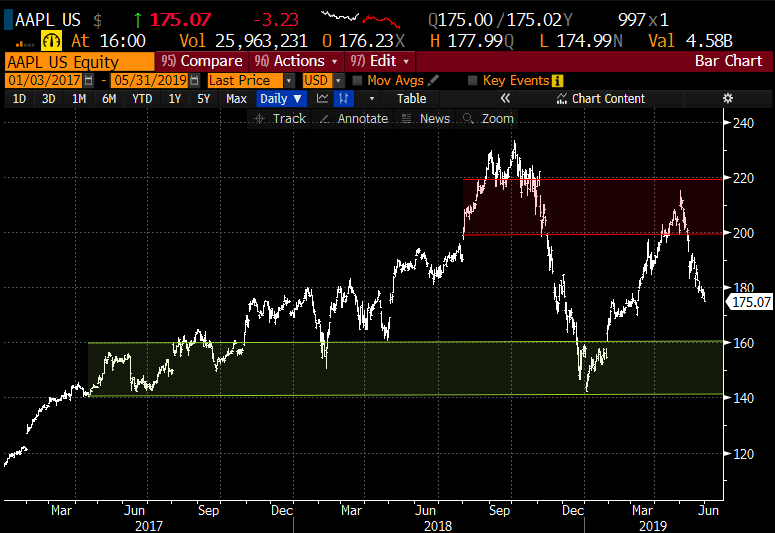 There are few stocks that I get asked more about, specifically how to get long it using options. The stock’s volatility of late has made it a good trading vehicle, but at current levels, it is really in no-mans-land and there are two main factors that will determine whether the stock is retesting the $200 or $160 this summer, that is trade which is ultimately going to be the main determinant in the company’s forward guidance. If there is NO resolution by the time AAPL is set to report their fiscal Q3 in late July, then results and guidance are very likely to suffer. If there is a kick-the-can down the road deal when trump meets President Xi in Japan at the G-20 at the end of the month then the stock bounces and the company is likely able to take a mulligan on the current quarter results and offer a more upbeat outlook into their all-important back to school period which should include new iPhones and then obviously the holiday selling season.

So what’s the trade? If I were looking for a long entry in AAPL, suspect there is some more near term downside, but optimistic that a resolution to the China trade dispute will happen this summer (which I am not, at least a substantive one) then it makes sense to consider bullish risk reversals in AAPL looking out to Aug expiration that will include their fQ3 results and guidance. It makes sense to use the support and resistance levels detailed above to help in from the strikes of the bullish trade.

Mark to Market prior to expiration:

Rationale, for those who want to be constructive and gain long exposure over the course of the summer, but not convicted on the entry point this strategy allows for plenty of wiggle room with the worst case scenario being put the stock at $150 on August expiration, down 14.5% from current levels, and suffering losses below, while allowing for gains above $195. The highest probability outcome is that the stock is in between the long call strike and the short put strike at August expiration in the trade is neither a winner or a loser.